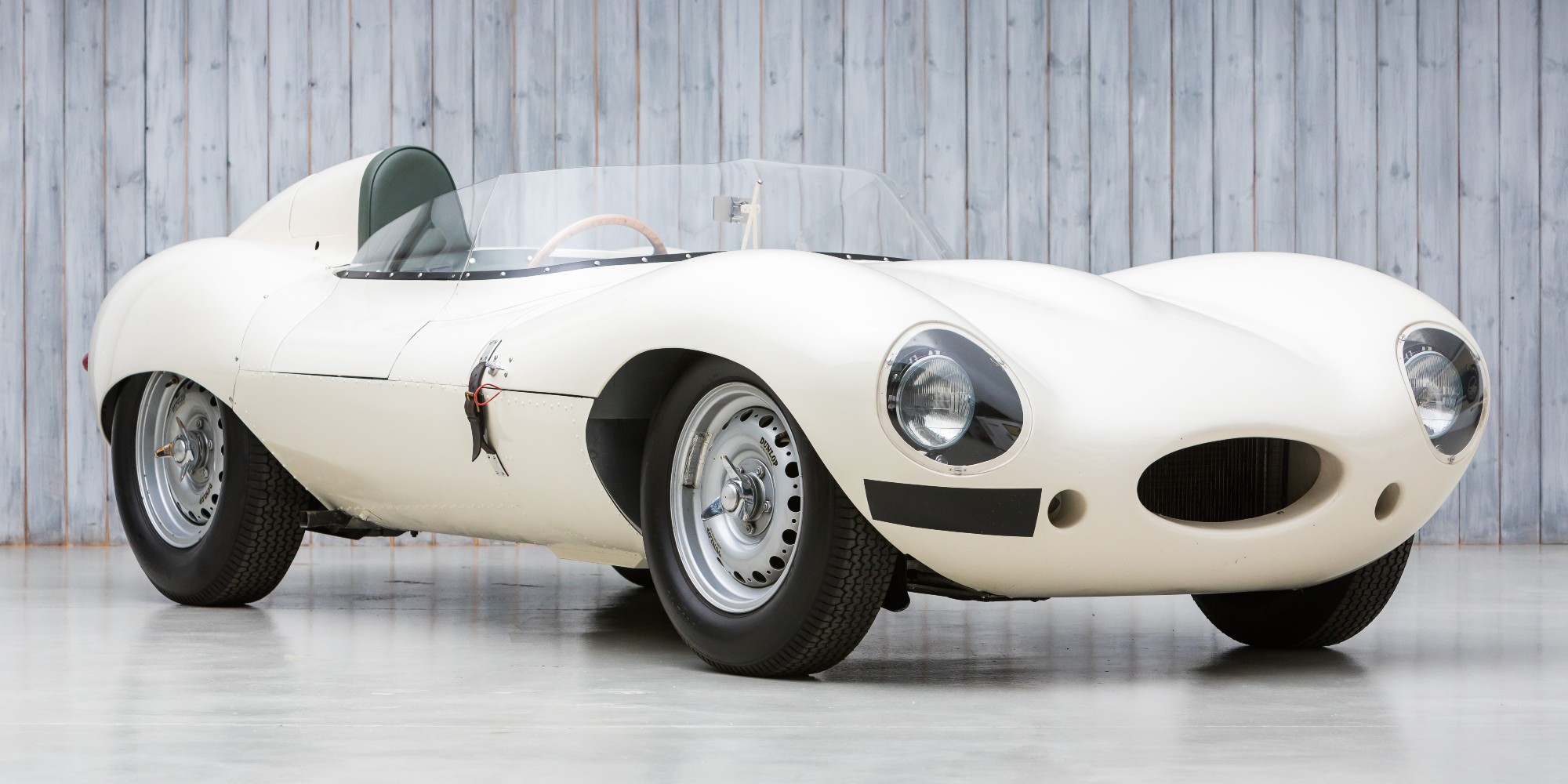 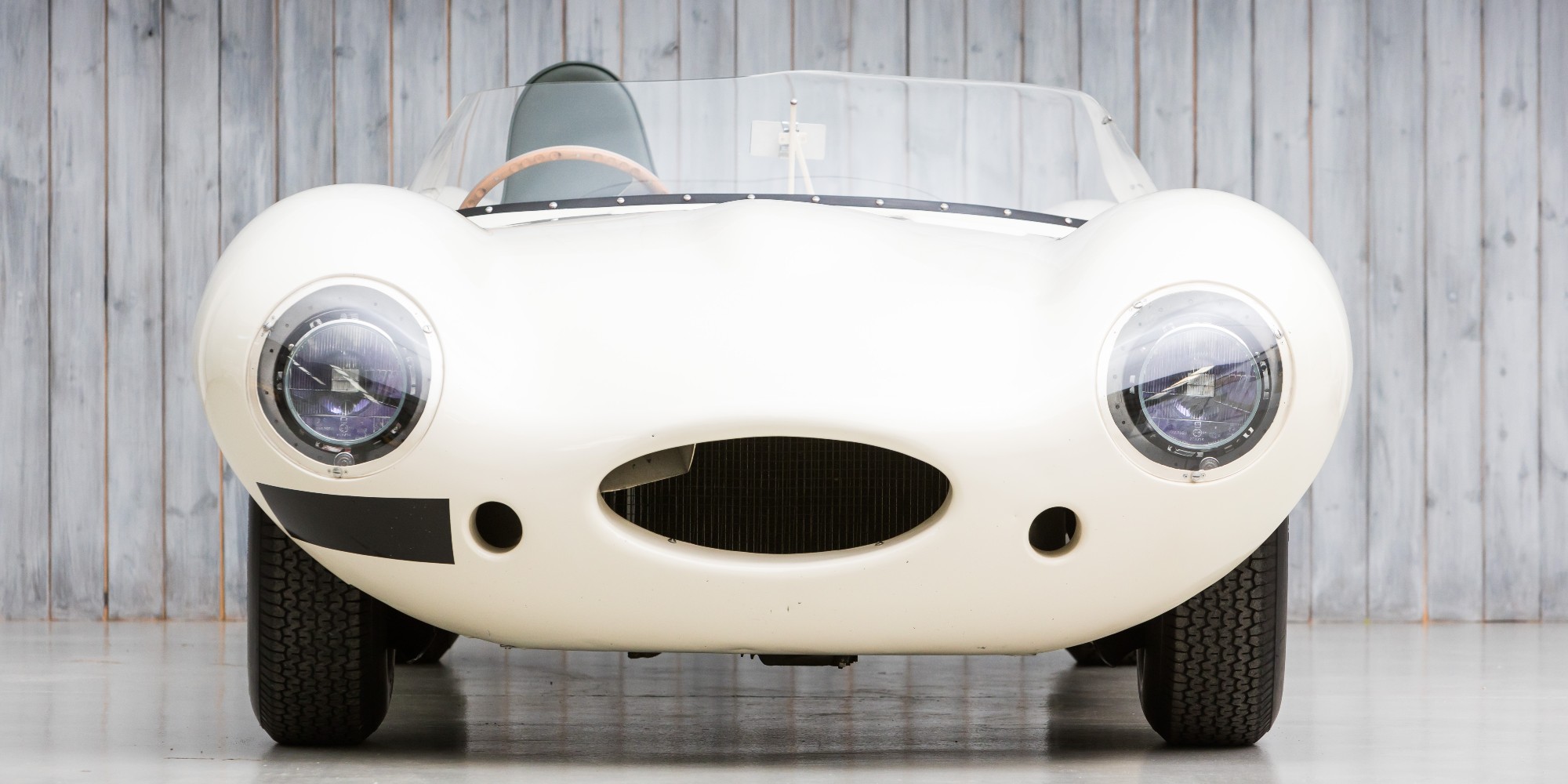 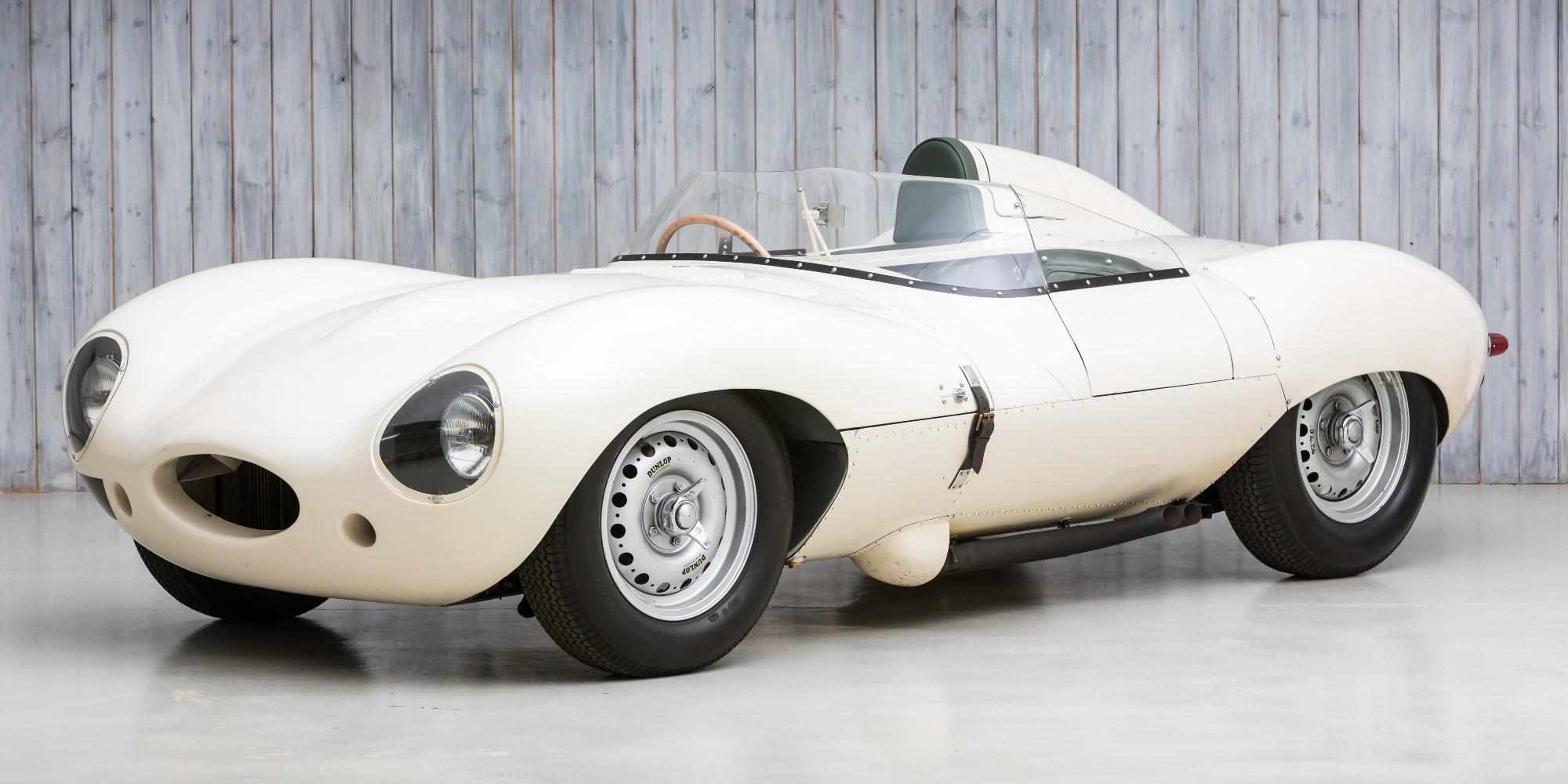 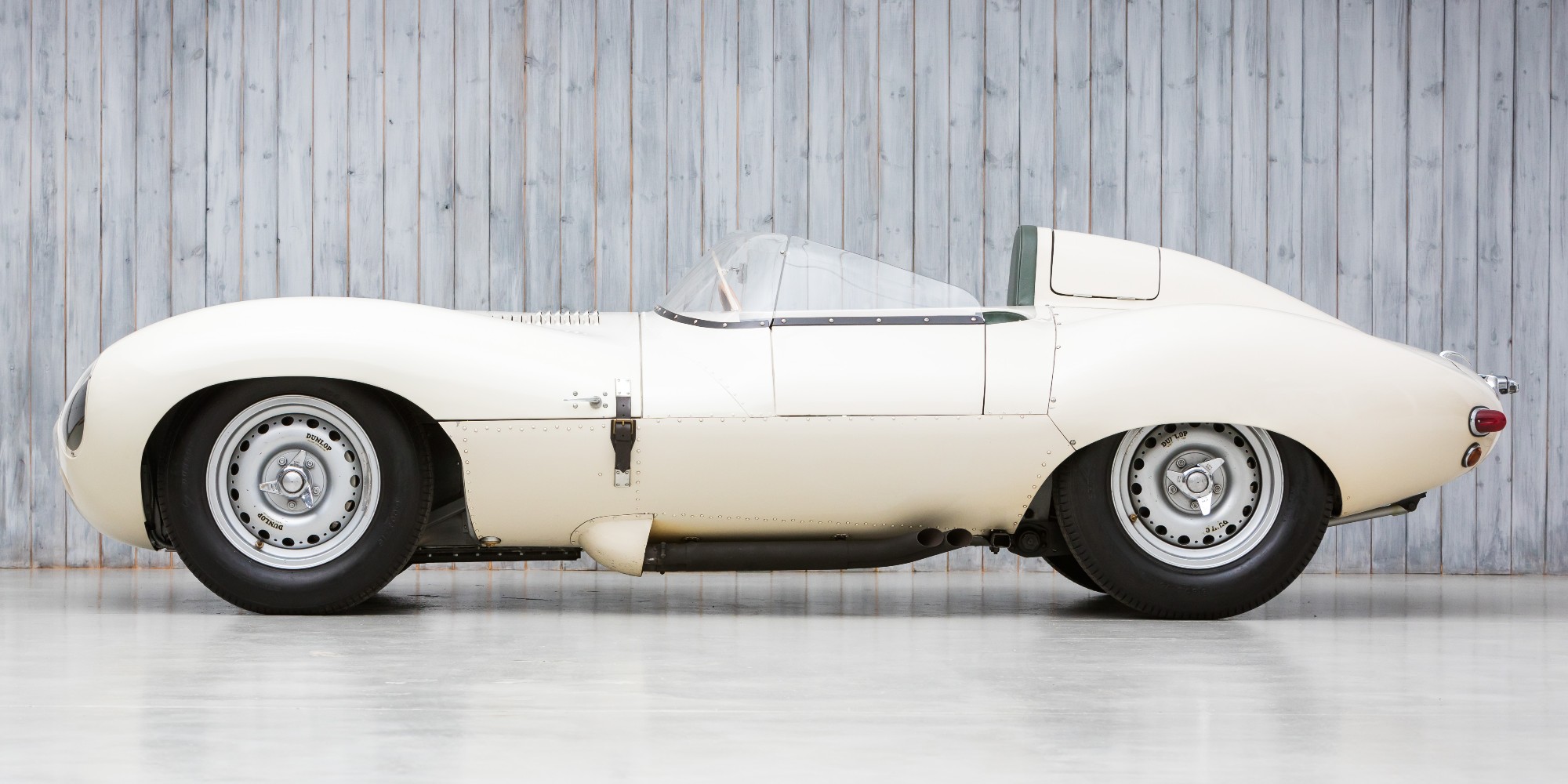 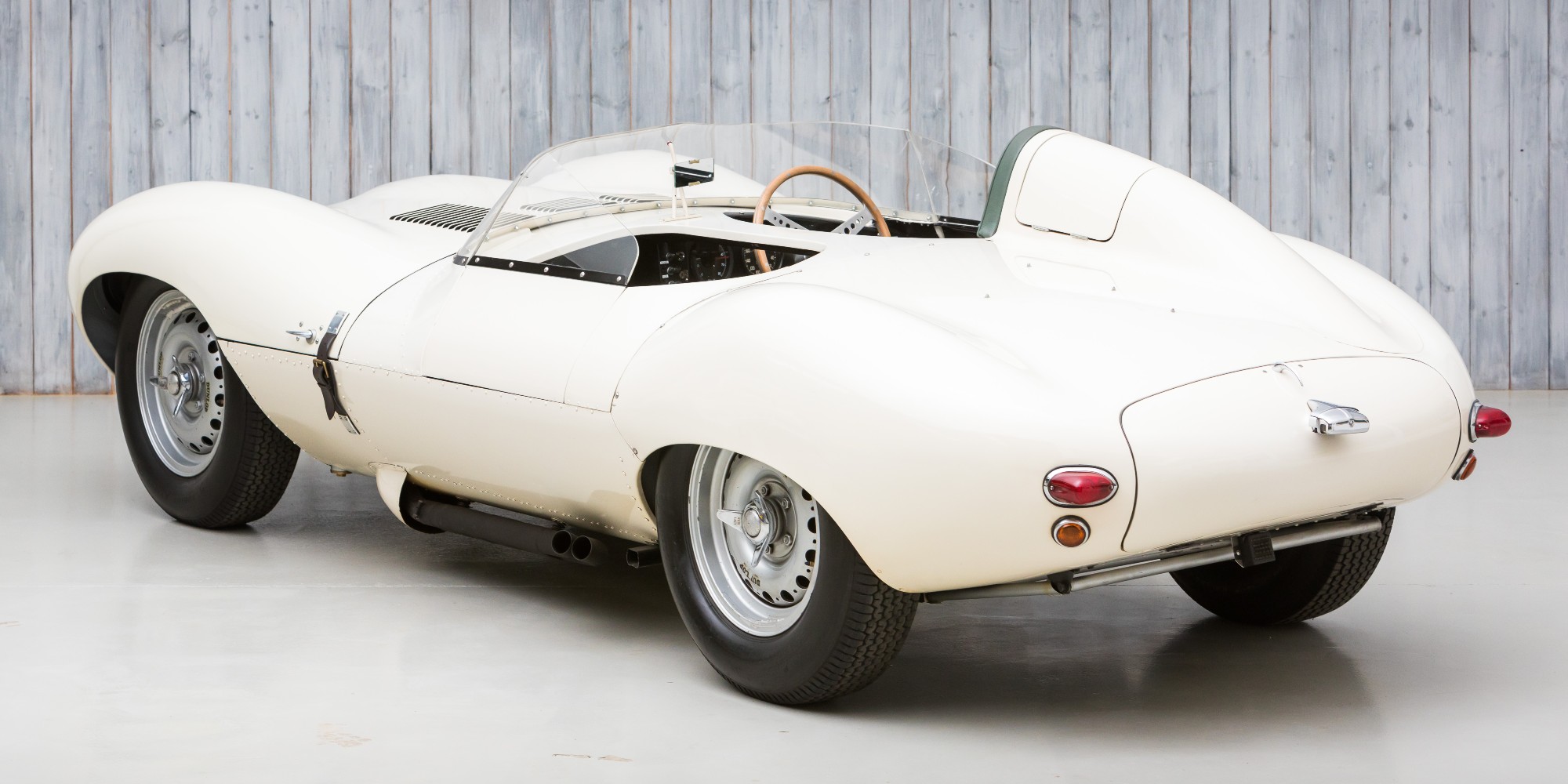 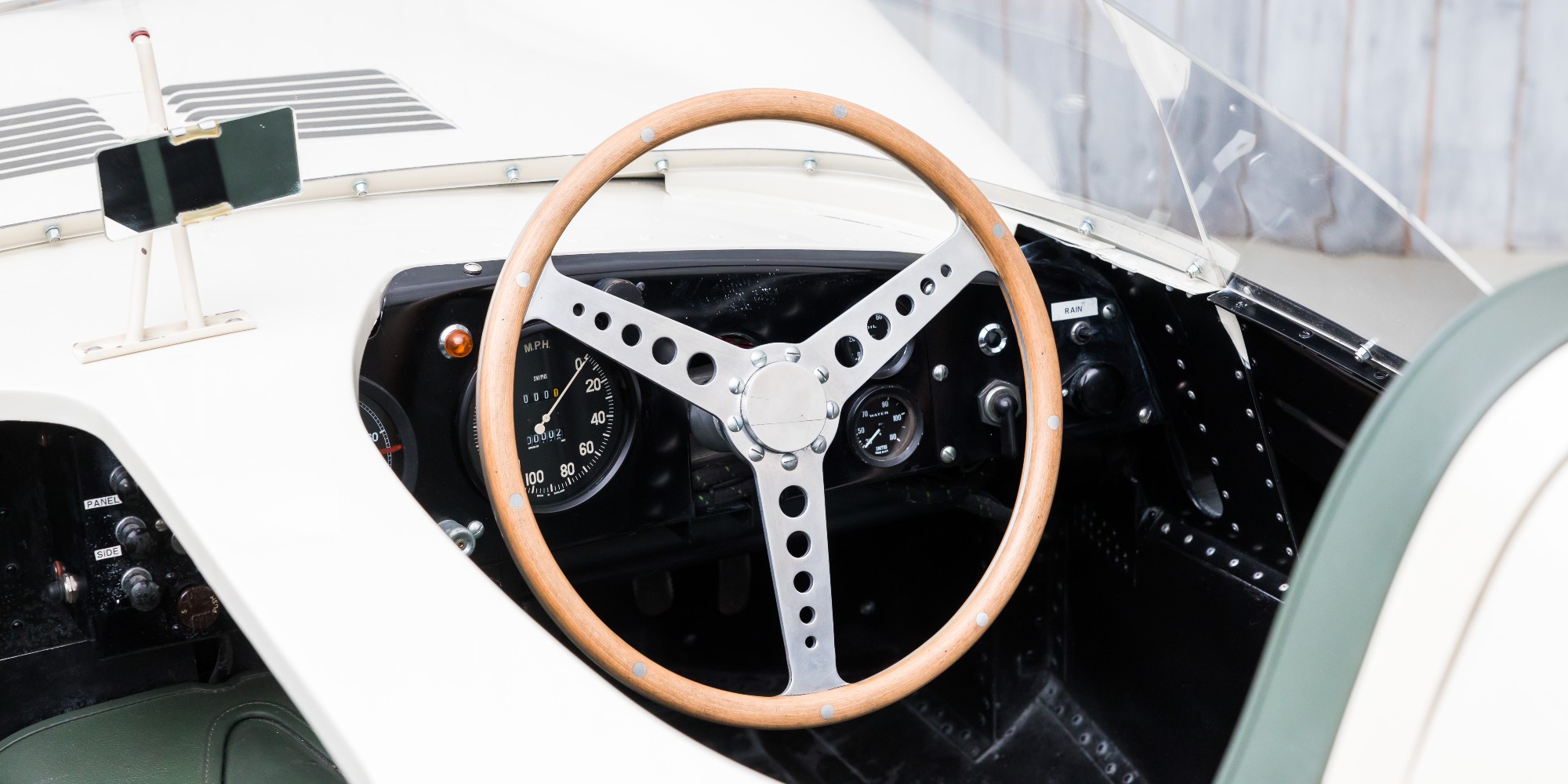 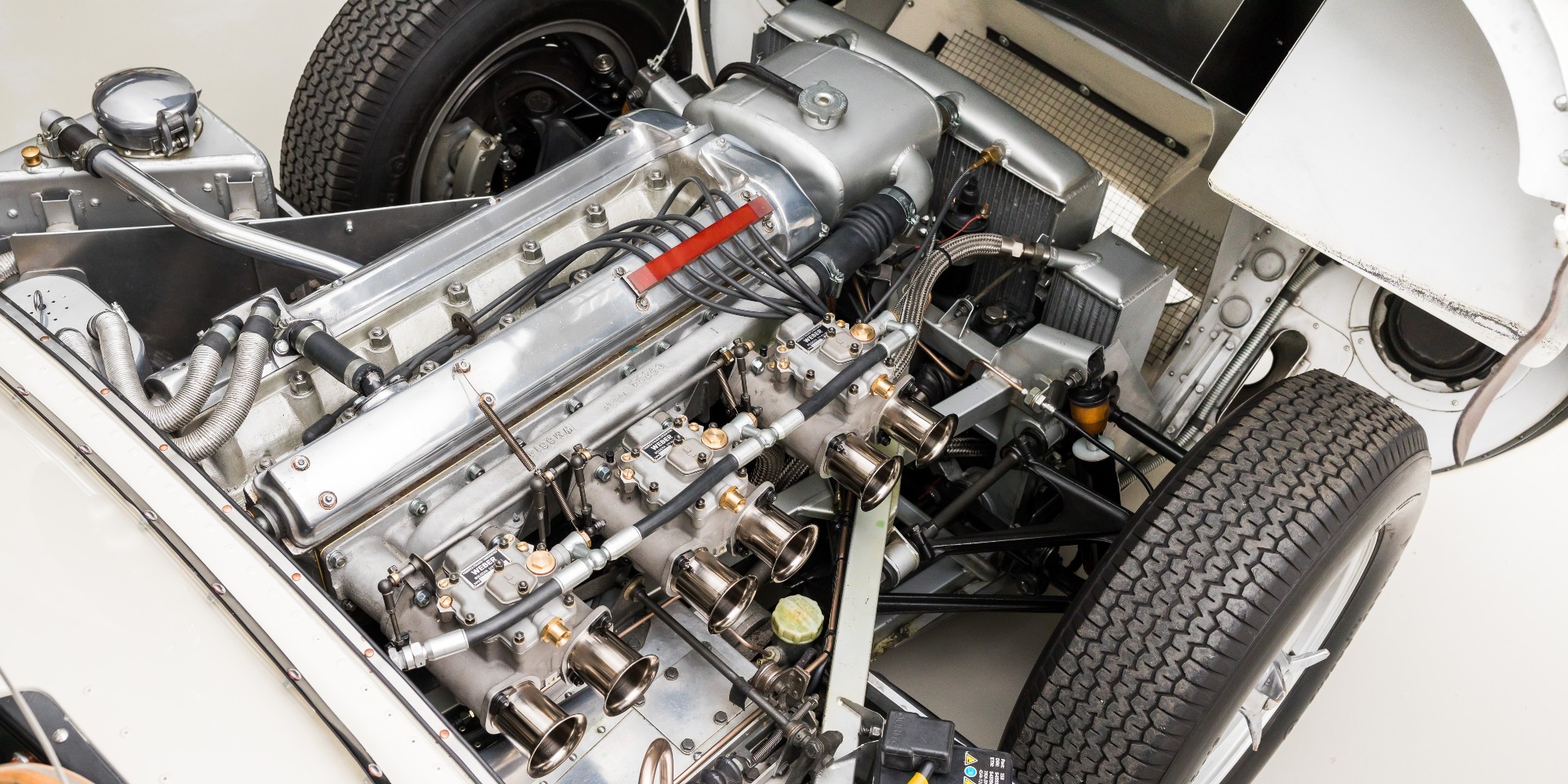 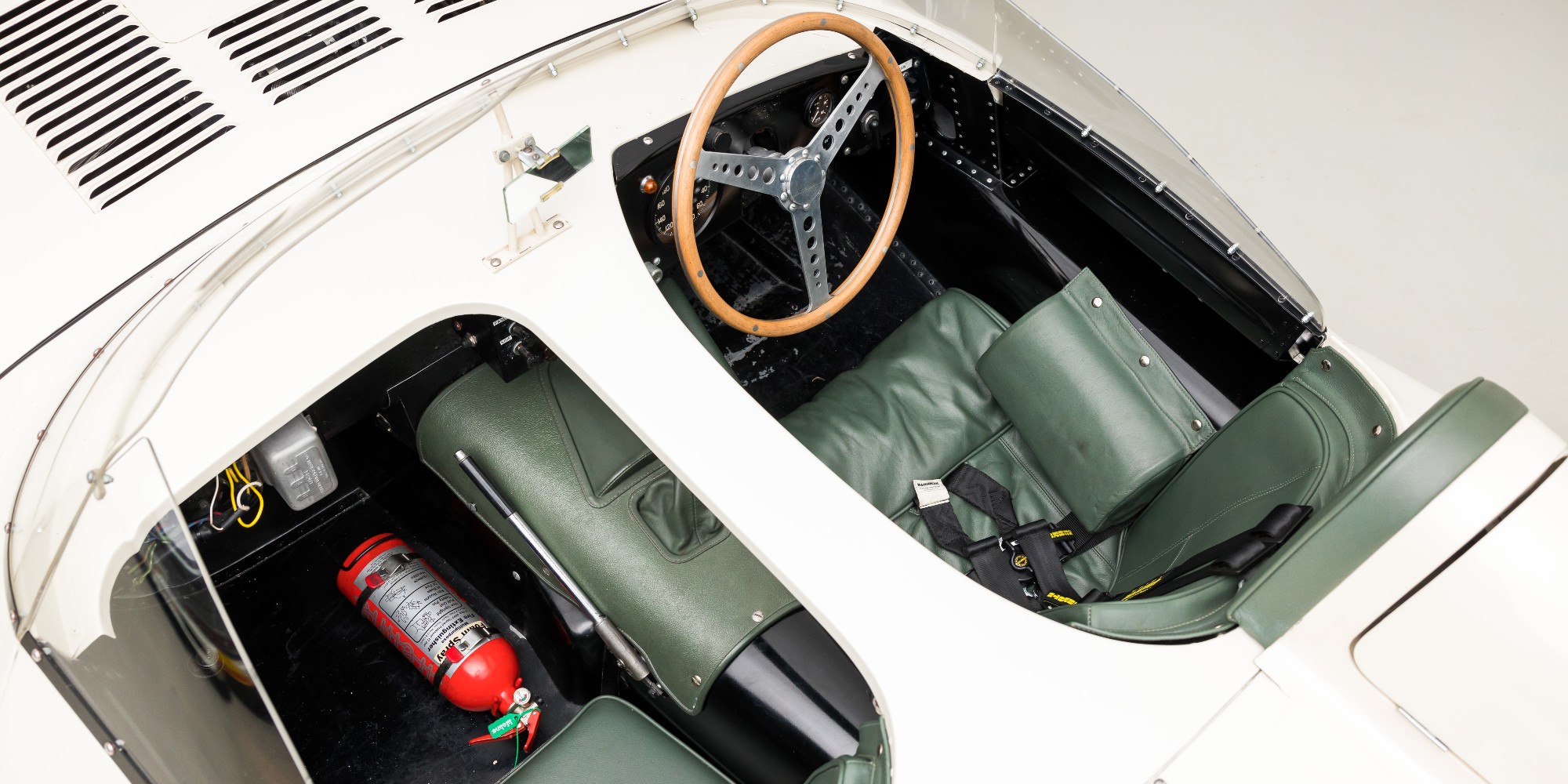 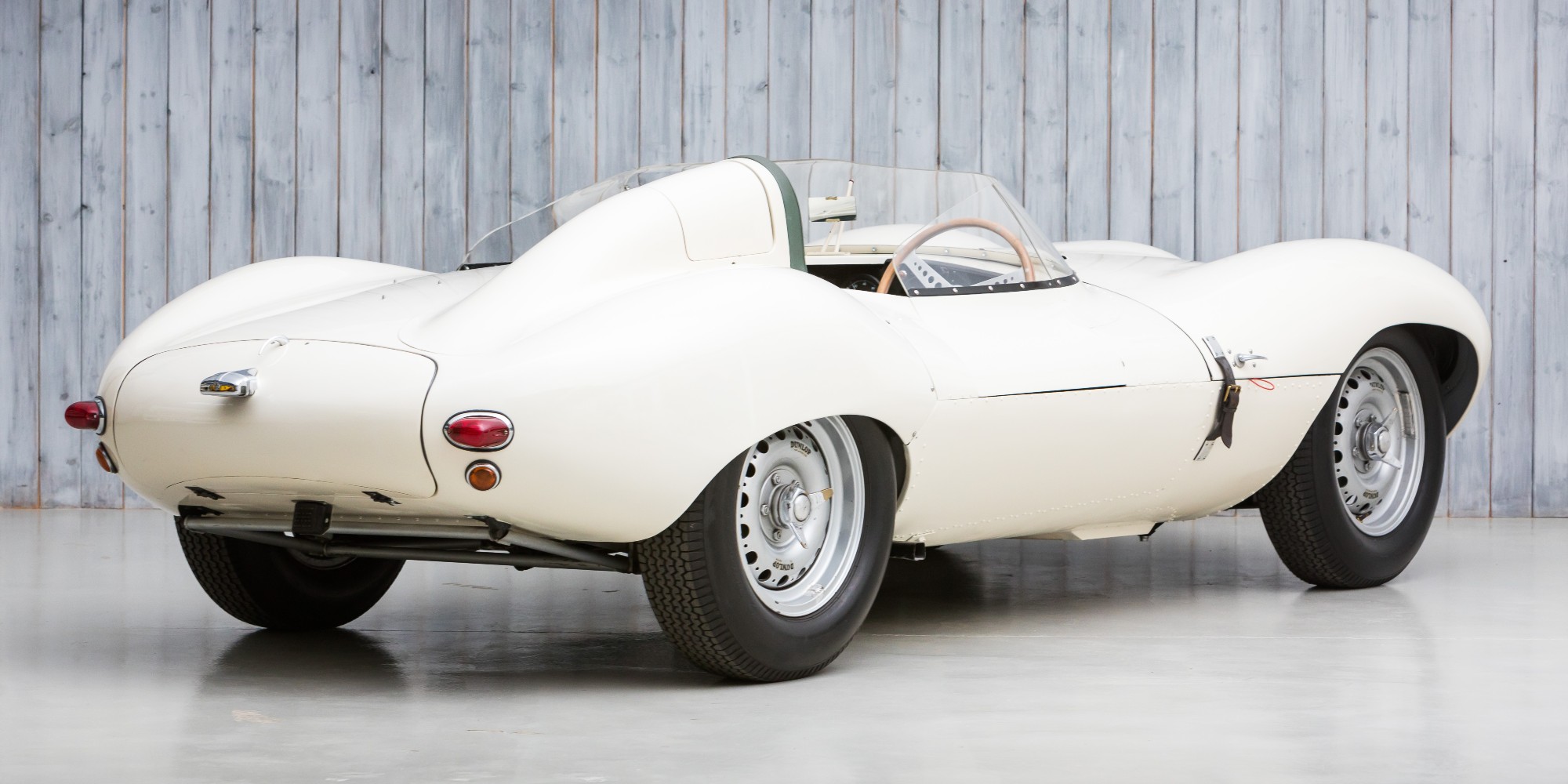 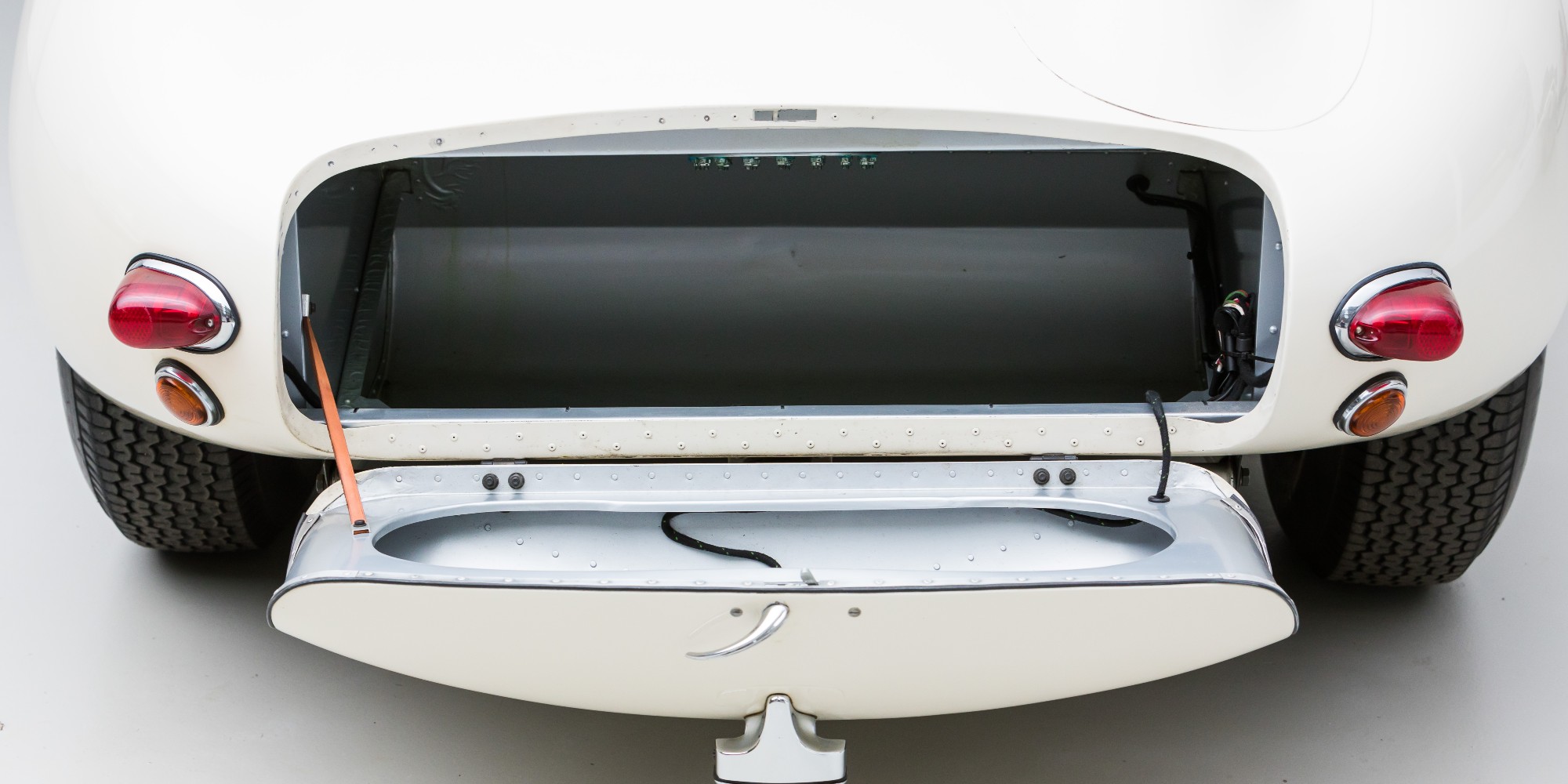 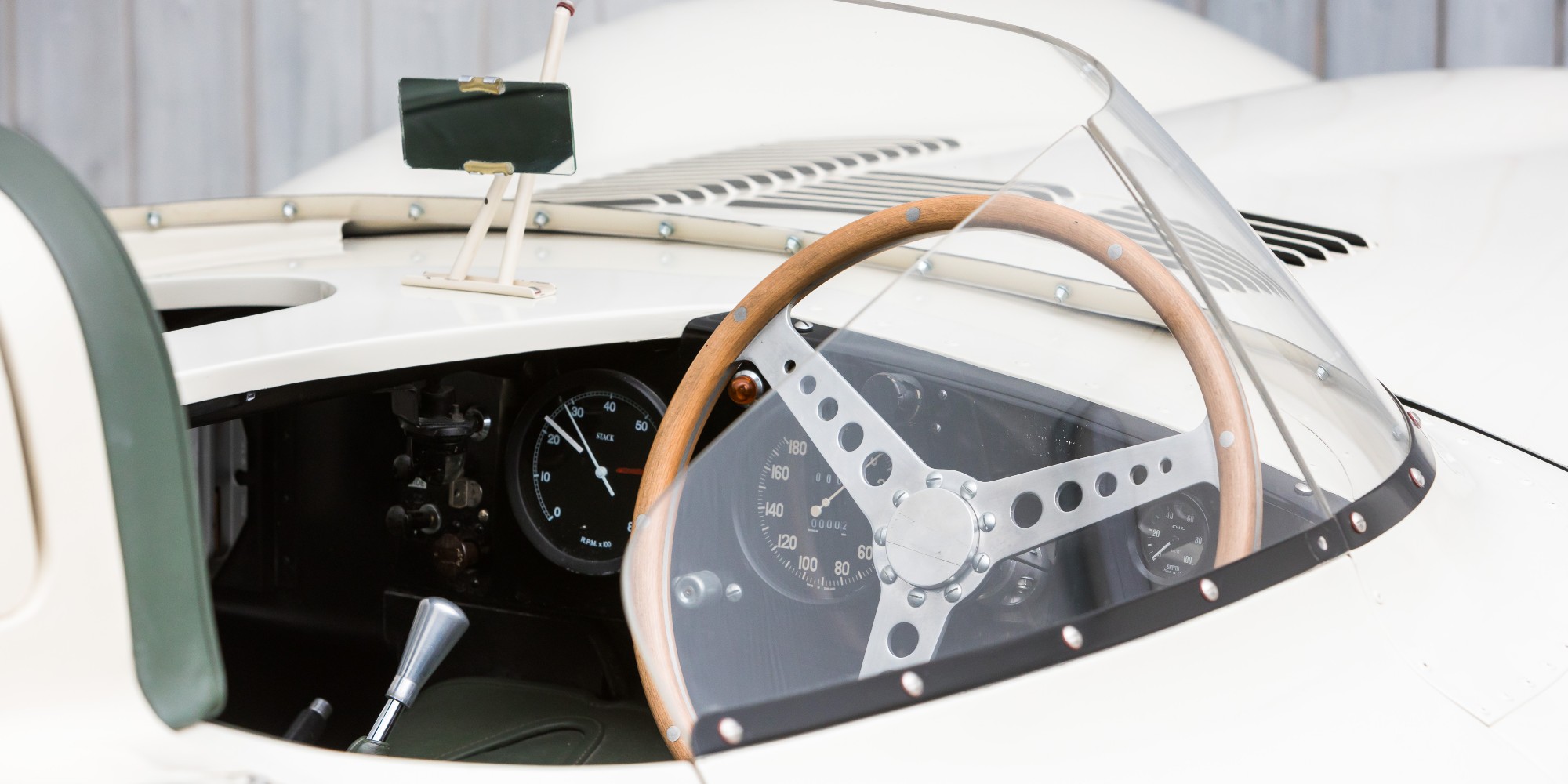 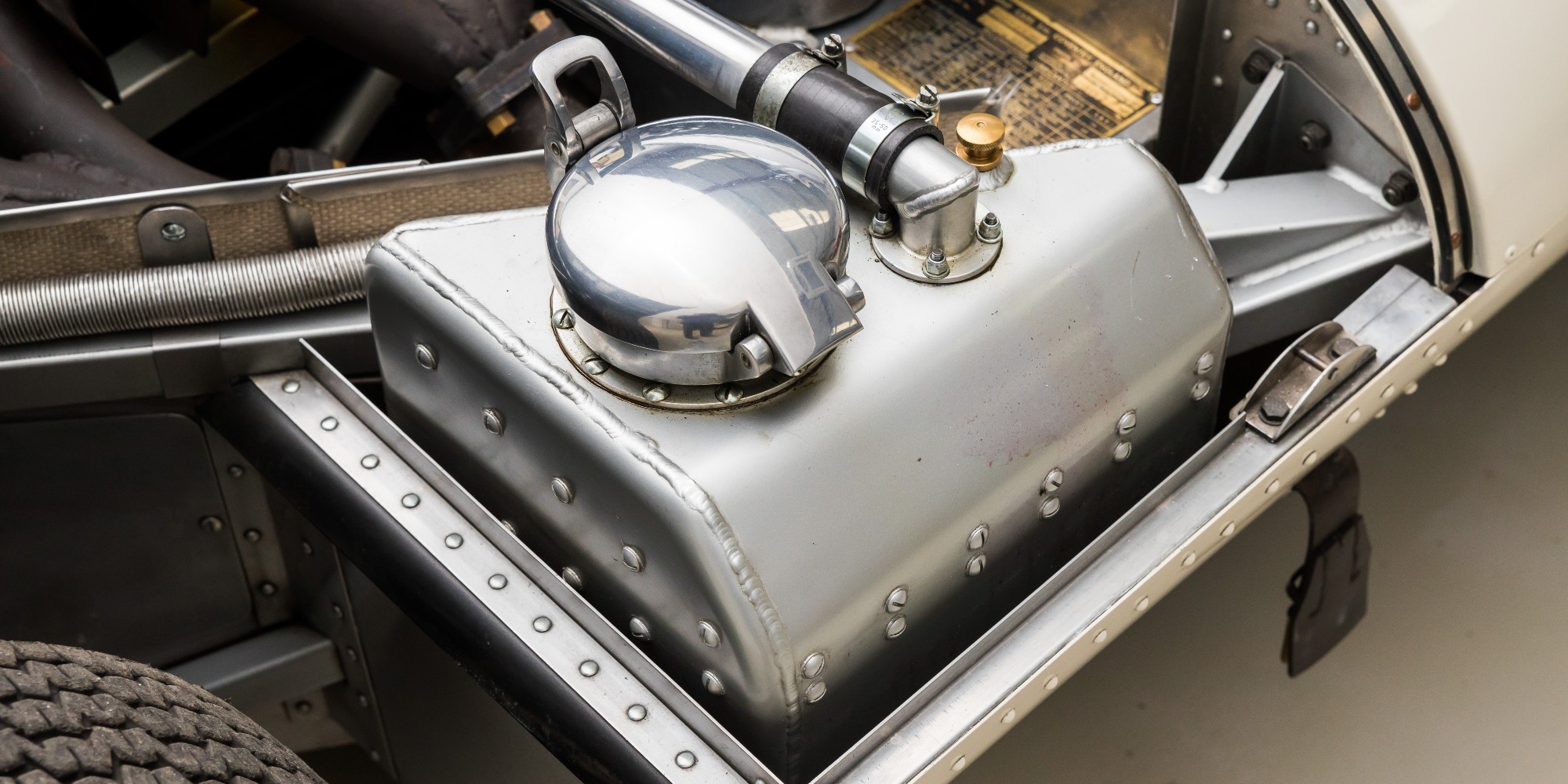 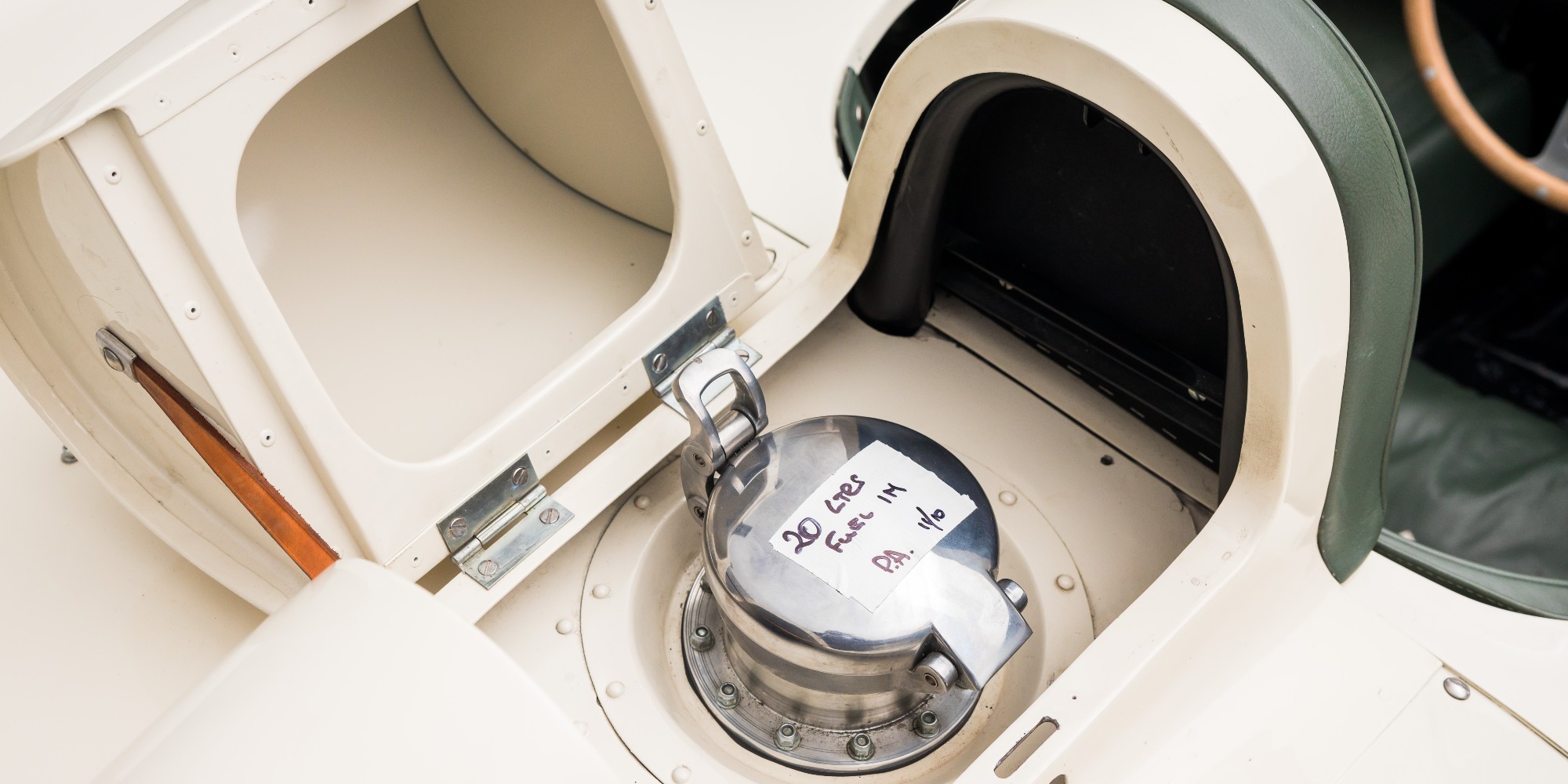 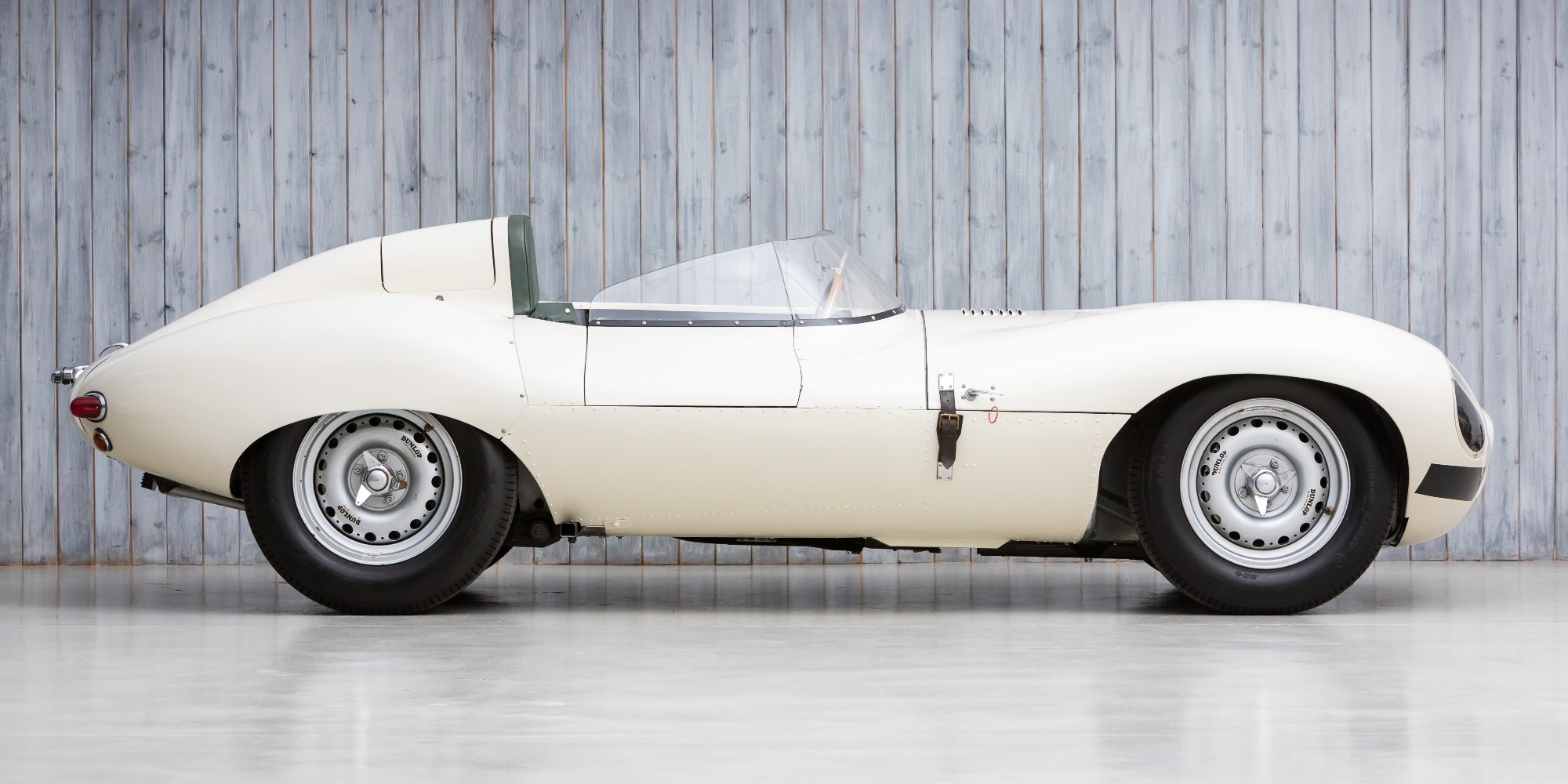 There are certain stand out design icons in this life, the Dunhill gold lighter, the Supermarine Spitfire and of course the D-Type Jaguar. With its perfectly proportioned and flowing curves it optimises the old expression if it looks fast it most probably is. A point it very much proved in its highly successful racing career by winning the Le Mans in 1955, 1956 and 1957.

By the early 1950s Jaguar was already a dominant force in sports car racing with the D-Types predecessor the C-Type. Built on a lightweight space frame chassis by Jaguar Chief Engineer William Heynes and clothed in a fully enveloping streamlined aluminium body it utilised a tuned version of Jaguars proven XK straight-6 engine, initially breathing through SU carburettors and eventually twin Webers.

An instant success the C-Type won Le Mans in its first attempt in 1951 in the hands of Peter Walker and Peter Whitehead. The C-Type would go on to again win Le Mans in 1953 in the hands of Duncan Hamilton and Tony Rolt, with Jaguar also coming in 2nd and 4th. This victory was the first time anyone had completed the gruelling 24 Hour race in an average of over 100 mph. However as always in motor racing the sands of time and development never stand still and it was time for a new car and what a car it turned out to be.

Designed specifically to win Le Mans the D-Type was a significant step forward from it predecessor and anything that had come before it. Designed by Malcolm Sayer, a brilliant aerodynamicist who had come to Jaguar from the Bristol Aeroplane Company. Sawyer had been involved in the C-Type towards the later part of its production and his aeronautical background is very evident in this new design.

The centre section of the car, or the tub as it is known, is a bonded and riveted aluminium monocoque structure. This is when the bodywork and chassis are effectively one lightweight and much stronger structure. This was a method already utilised in the aeroplane industry, but was then revolutionary in automotive design. A front and rear lightweight aluminium tubing space frame was then attached to the central tub and a lightweight aluminium bonnet and tail section on top. The effective result has gone on to be one of the most revered designs of all time. Low, sleek and most importantly incredibly streamline.

The D-Type utilised a lot of the mechanical components from it predecessor the C-Type. Powered by Jaguar’s wonderfully smooth straight-6 cylinder engine, initially in 3.4-litre configuration and lately 3.75 and 3.8. Canted over at 8.5 degrees and fitted with a dry sump lubrication system to further reduce the D-Types overall frontal area. The gearbox was the Moss developed 4-speed synchromesh box. The suspension was a double wishbone, torsion bar, design at the front with telescopic shock absorbers and anti-roll bar. At the rear was a rigid back axle, with transverse torsion bar and telescopic shock absorbers. The brakes were discs all-round.

Under the experienced leadership of Jaguar’s racing  manager Lofty England a team of D-Types made their debut with three cars for the 1954 24 Hours of Le Mans. Road registered OKV 1, OKV 2 and OKV3, sadly the cars were hampered by fuel starvation caused by problems caused by the fuel filters. Eventually they were removed and Duncan Hamilton and Tony Rolt went on to finish less than a lap behind the winning Ferrari in OKV 2. Although giving up 1.5 litres in engine capacity to Froilan Gonzalez and Maurice Trintignant’s more powerful Ferrari 375 Plus the D-Type’s aerodynamic superiority allowed it be significantly faster down the long Mulsanne Straight, clocking a maximum speed of 172.8 mph compared to the Ferrari’s 160.1 mph.

Three weeks later Ken Wharton and Peter Whitehead took the D-Type victory in the Reims 12 hours with Tony Rault and Duncan Hamilton coming in 2nd. Jaguar returned to Le Mans in 1955 with the new longer nosed design. Designed to further aid the cars aerodynamics, Mike Hawthorn and Ivor Bueb took the D-Types first of three victories on the Circuit de la Sarthe. Sadly the race was marred by one of the worst accidents in motorsport history causing Mercedes to withdraw from motorsport for many years.

The first production D-Type also came out of the factory in 1955. Mostly in short nose configuration they were sold to  and used with great effect by privateer teams and gentleman racers on both sides of the Atlantic. In 1956, it was the turn of these privateer teams to take the glory for Jaguar with Ron Flockheart and and Nino Sanderson taking victory in the Ecurie Ecosse entered D-Type and Jacques Swatters and Freddy Rouselle coming in 4th in the yellow Equipe Nationale Belge car.

The works team were back on top for the 1956 Reims 12 Hours taking an impressive 1,2,3 finish. On the 13th of October 1956 Jaguar announced that its factory team would withdraw from racing at the end of the year. Thankfully the

D-Type’s winning run continued under Ecurie Ecosse and the American Briggs Cunningham team. In 1957, the Scot’s achieved a one-two finish, with D-Types also finishing third, fourth and sixth. If that wasn’t enough, one of them also broke the circuit speed record, reaching 178.8mph along the Mulsanne Straight. With the rules changing to a 3-litre maximum for Le Mans in 1958, the D-Types reign was brought to an end but not before it had firmly cemented its place in history.

This stunning tool room recreation of the iconic short nose D-Type was built by internationally respected Jaguar racing specialists Pearsons Engineering ready for the 2016 historic racing season. Registered 842 YUT, it incorporates their well proven racing 3.4-litre engine and 4-speed gearbox and all of their vast experience gained from years of running and racing front running D-Types in historic racing.

The engine and gearbox we refreshed by Pearsons in May 2017 and the car has competed in some nine events since, approximately 14 hours use. Having very much proved its worth on the track, it has been prepared by Pearsons throughout.

Sold with fresh 2022 FIA HTP papers, this is a perfect opportunity to get out on track and experience what a front running D-Type feels like and why they continue to be held in such regard in historic racing just as they did in their day.