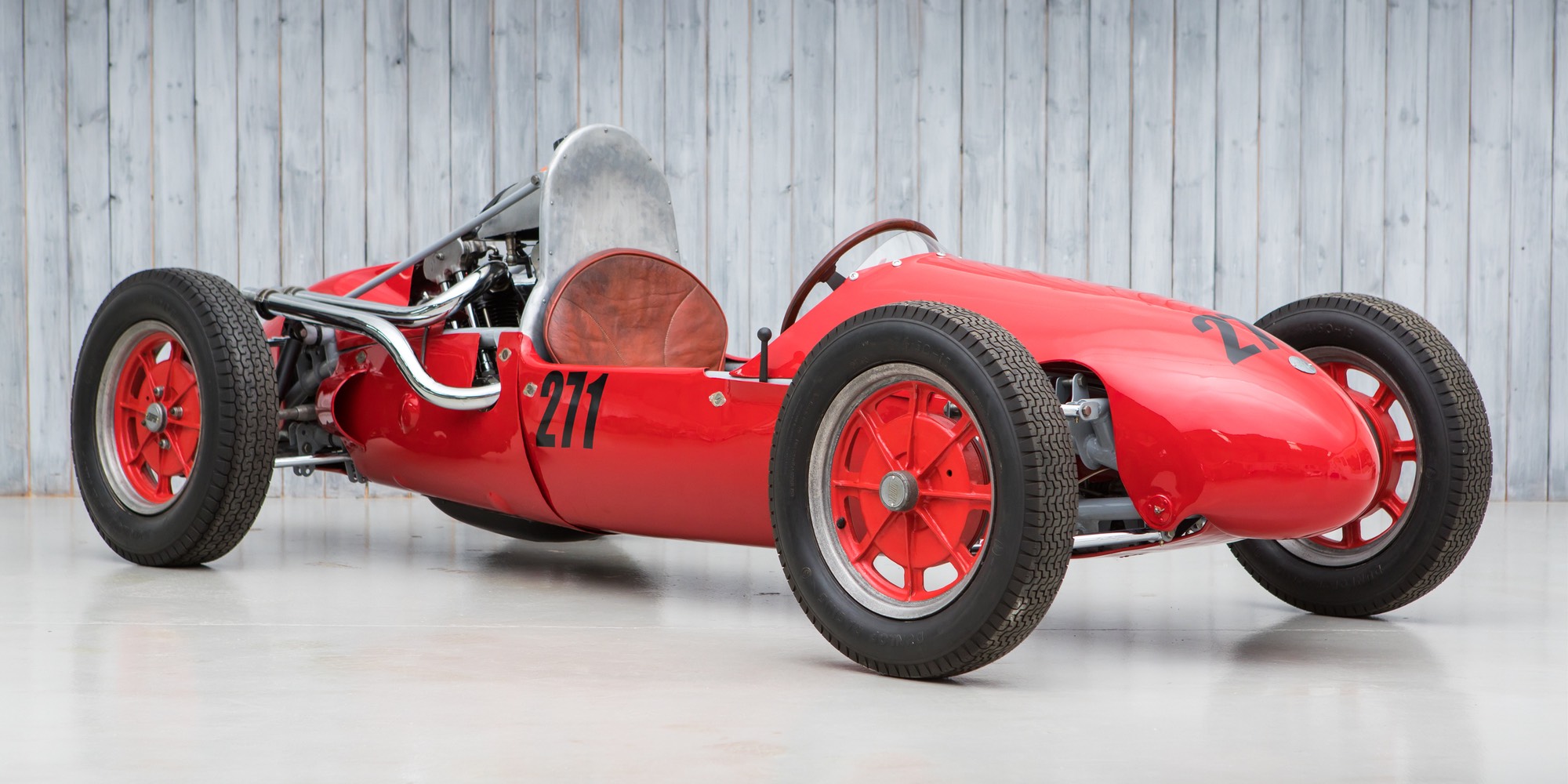 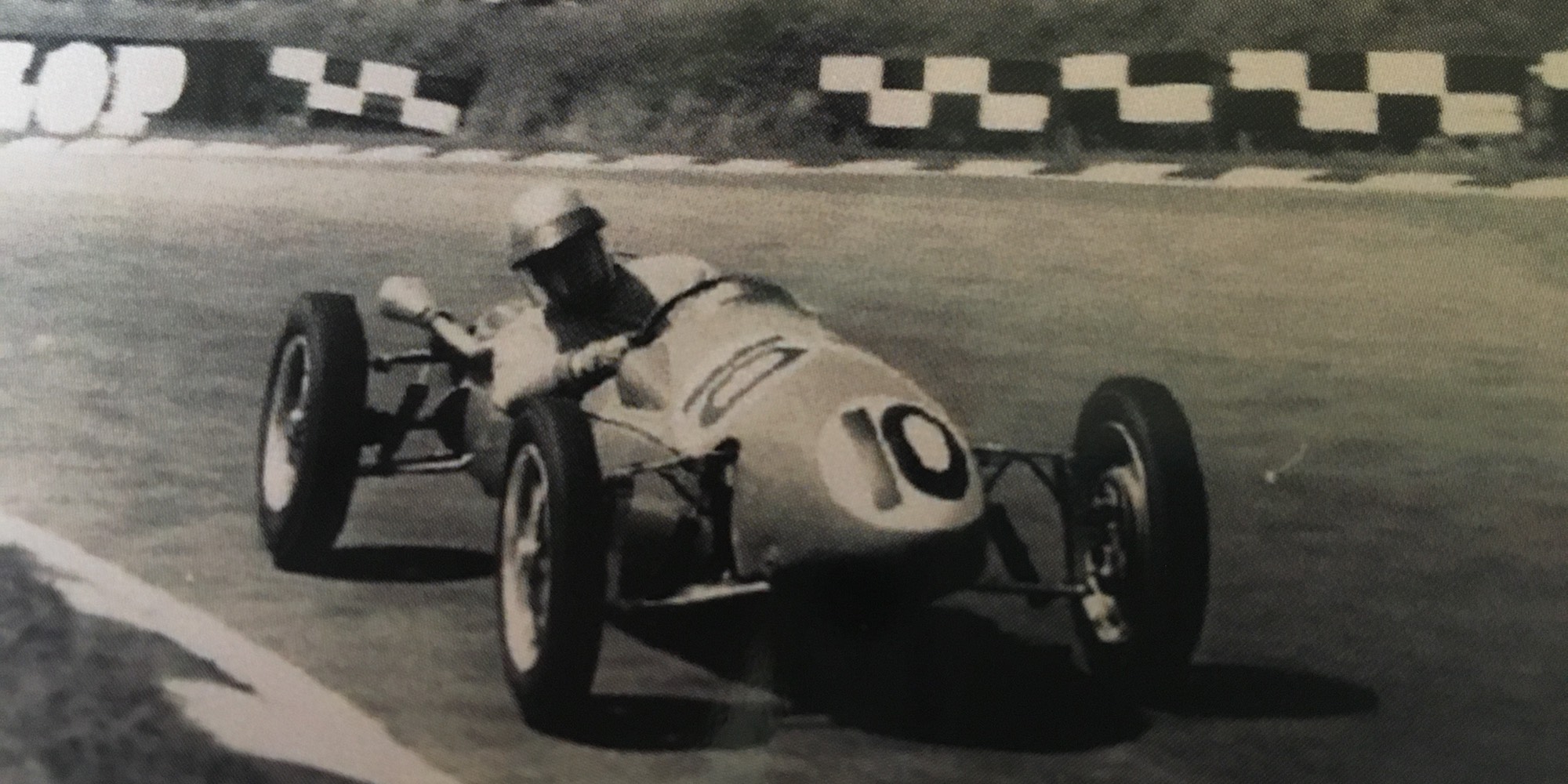 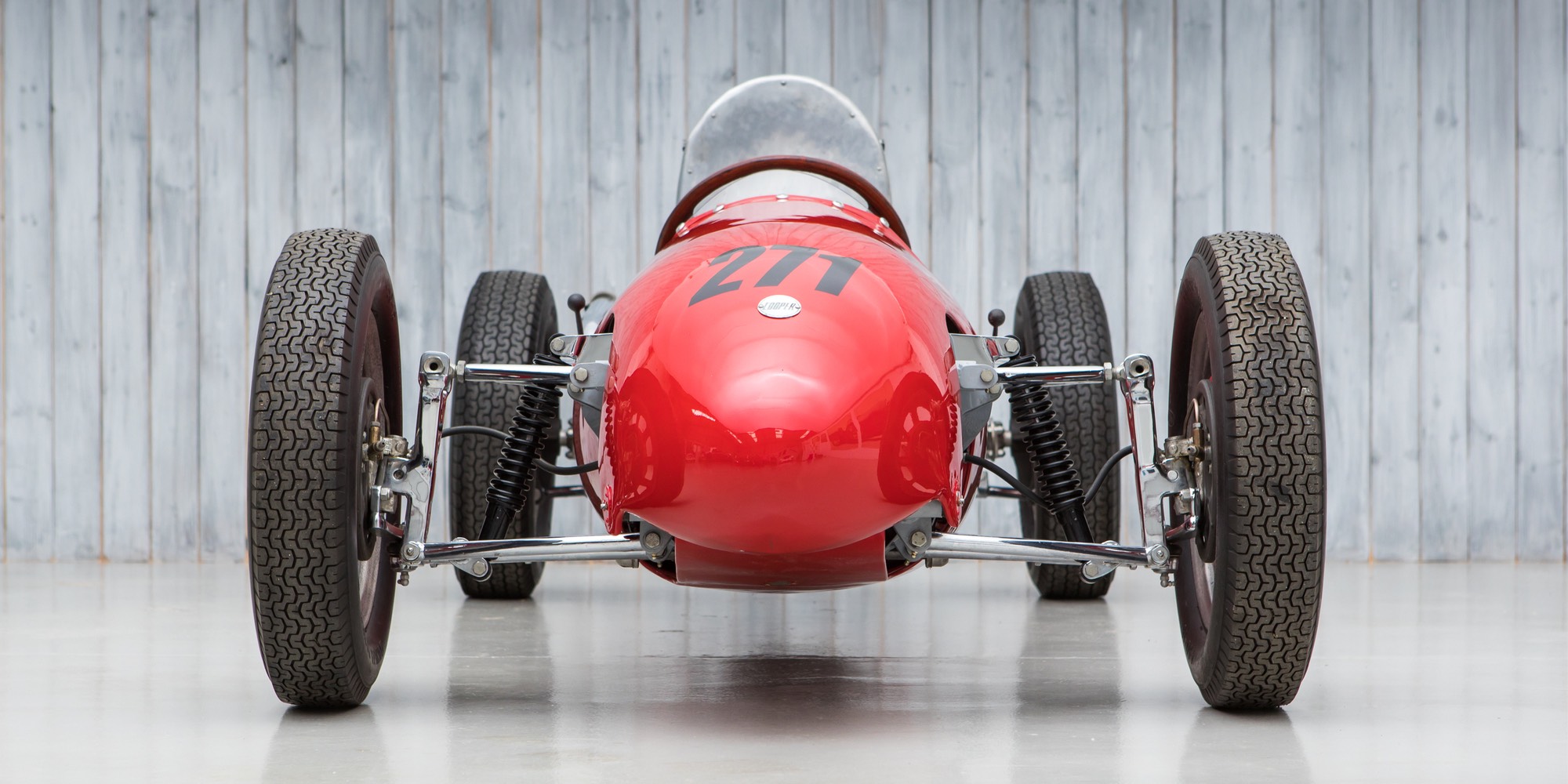 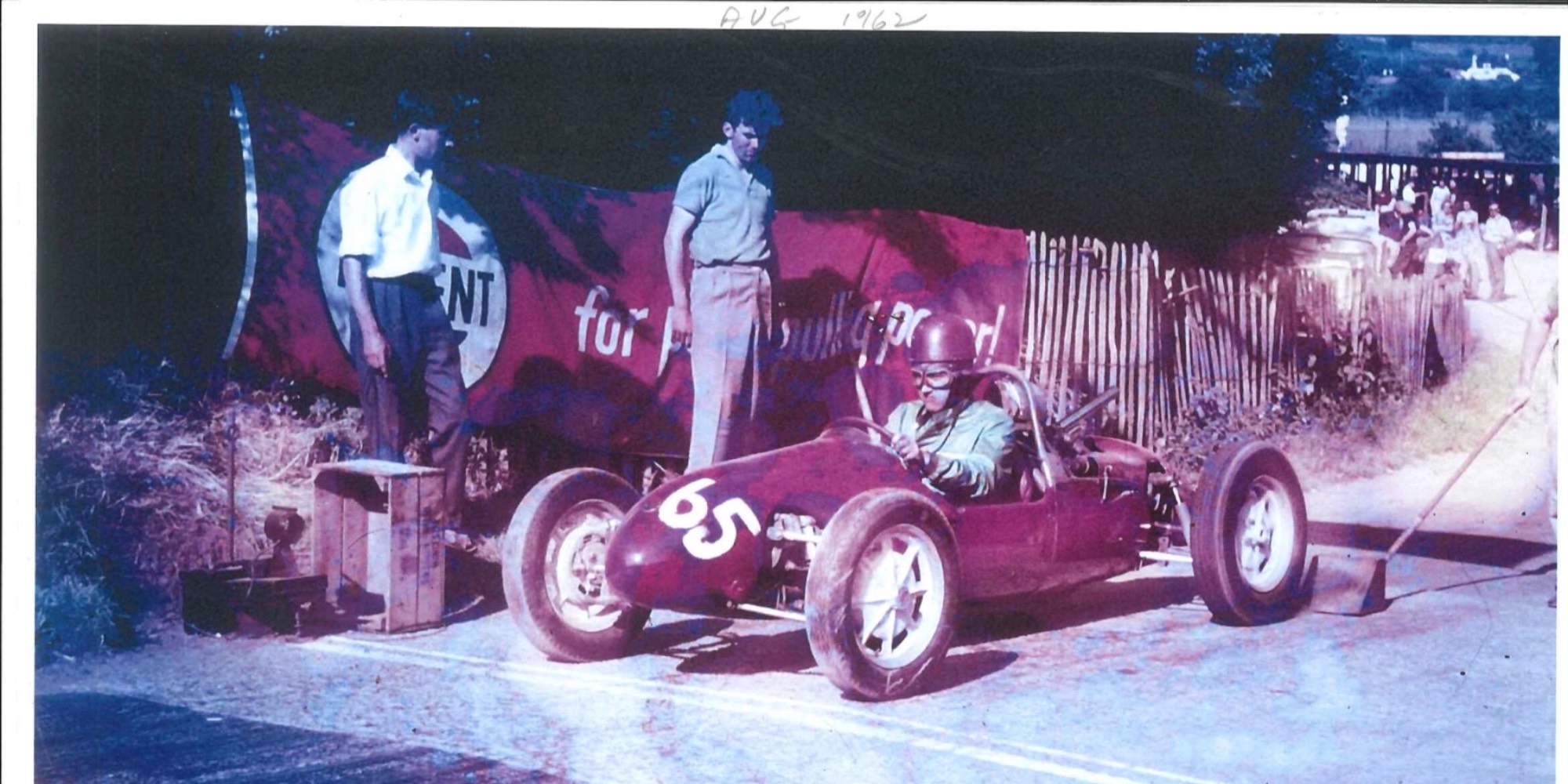 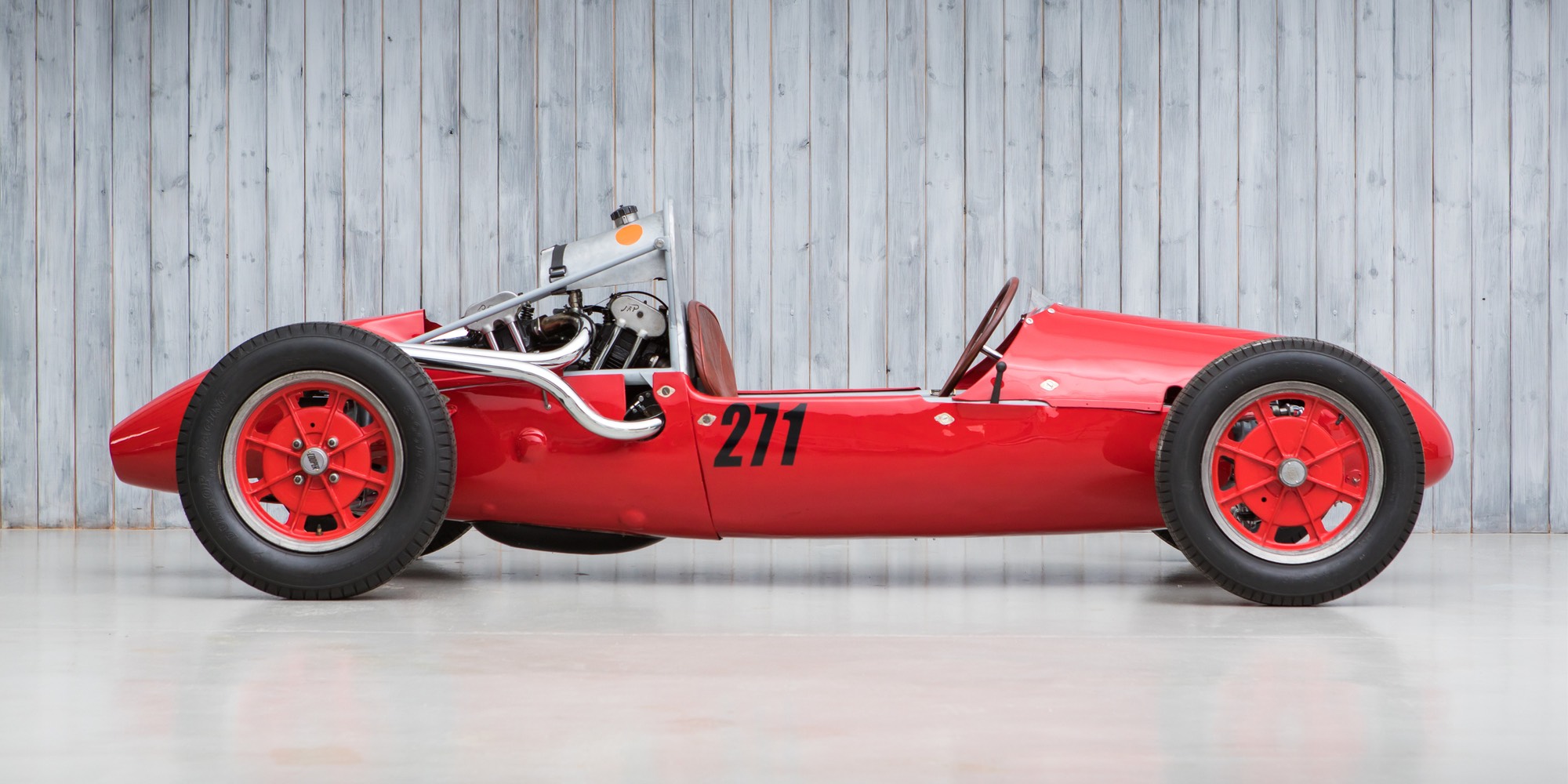 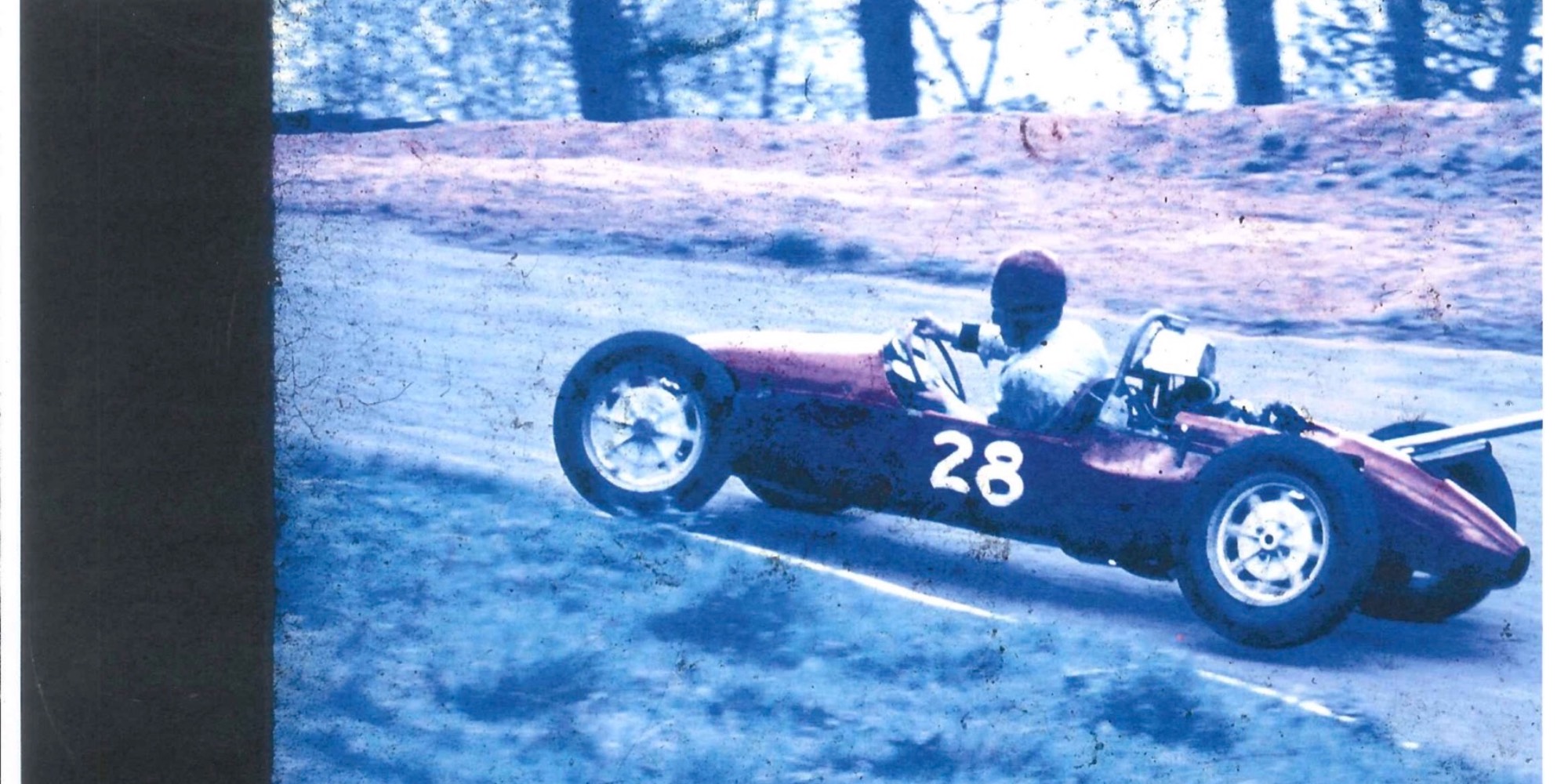 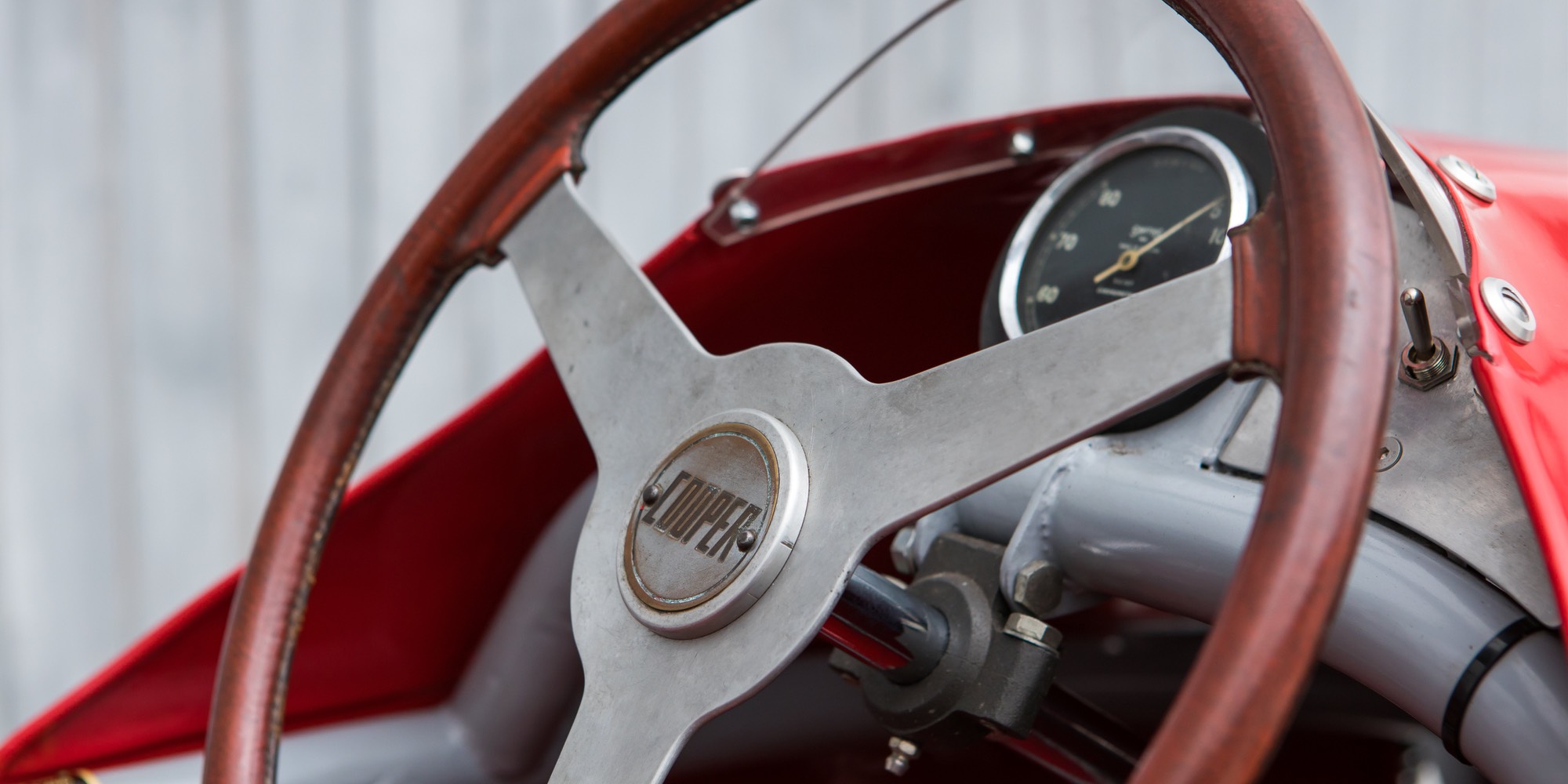 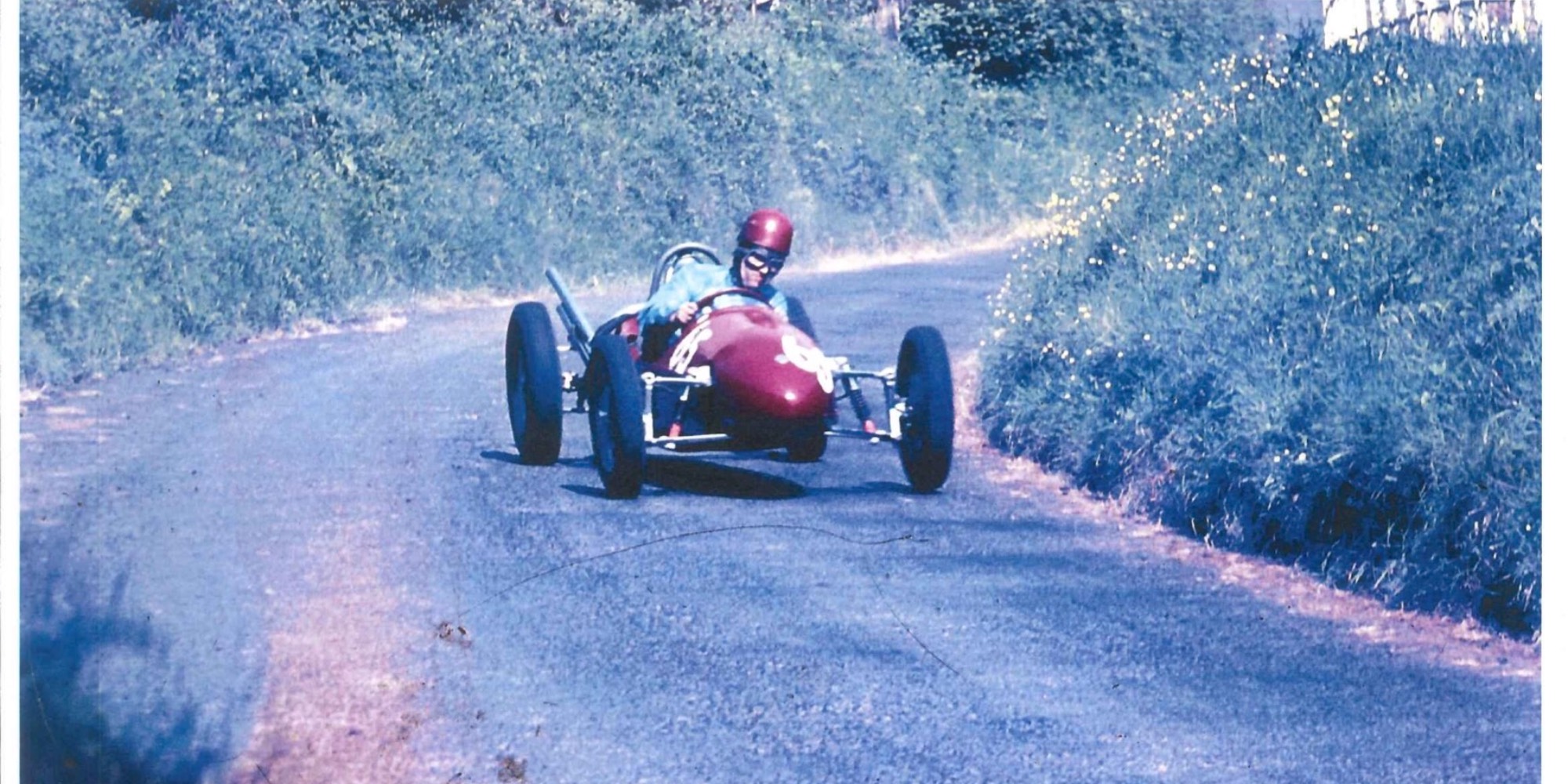 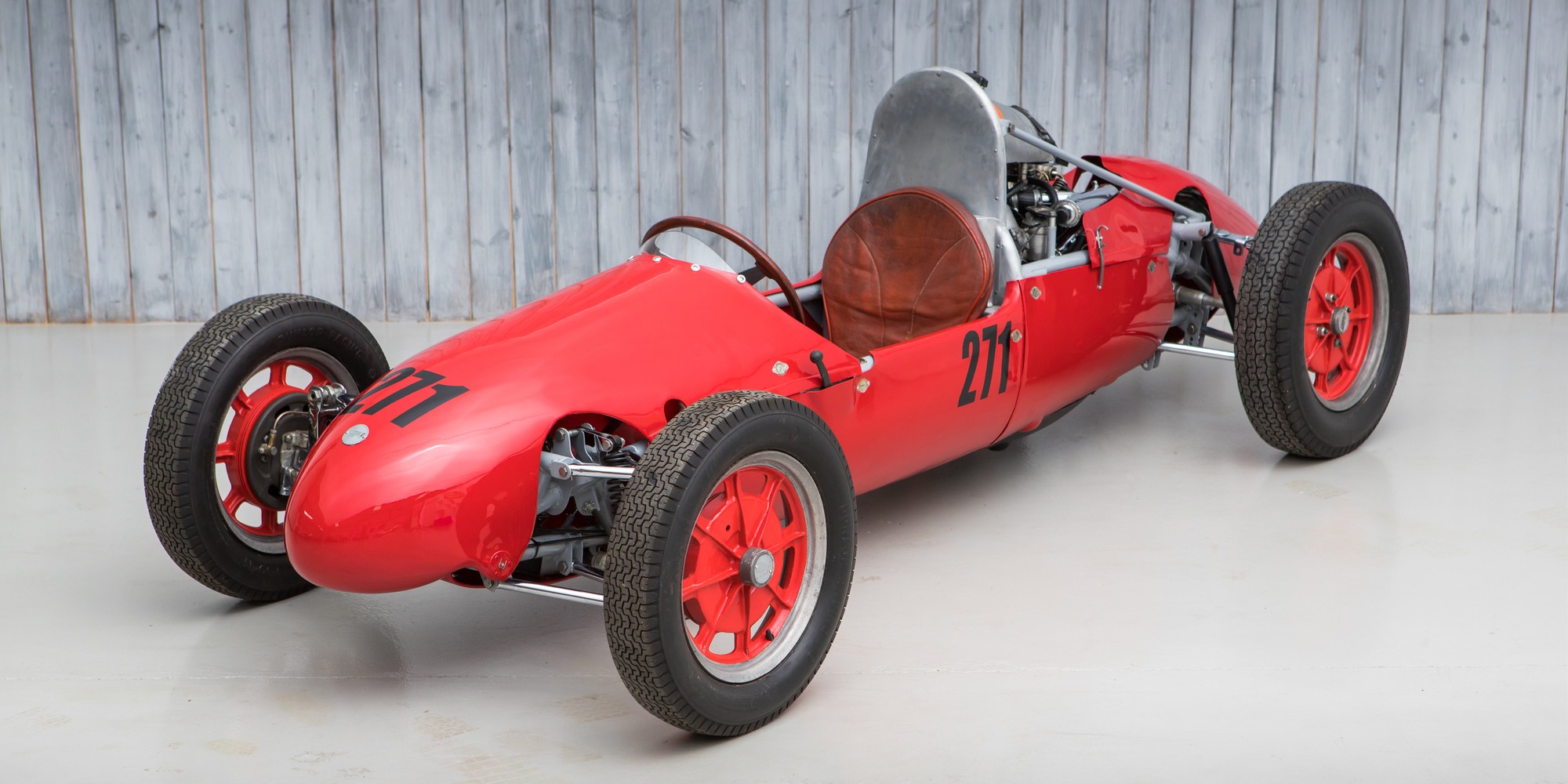 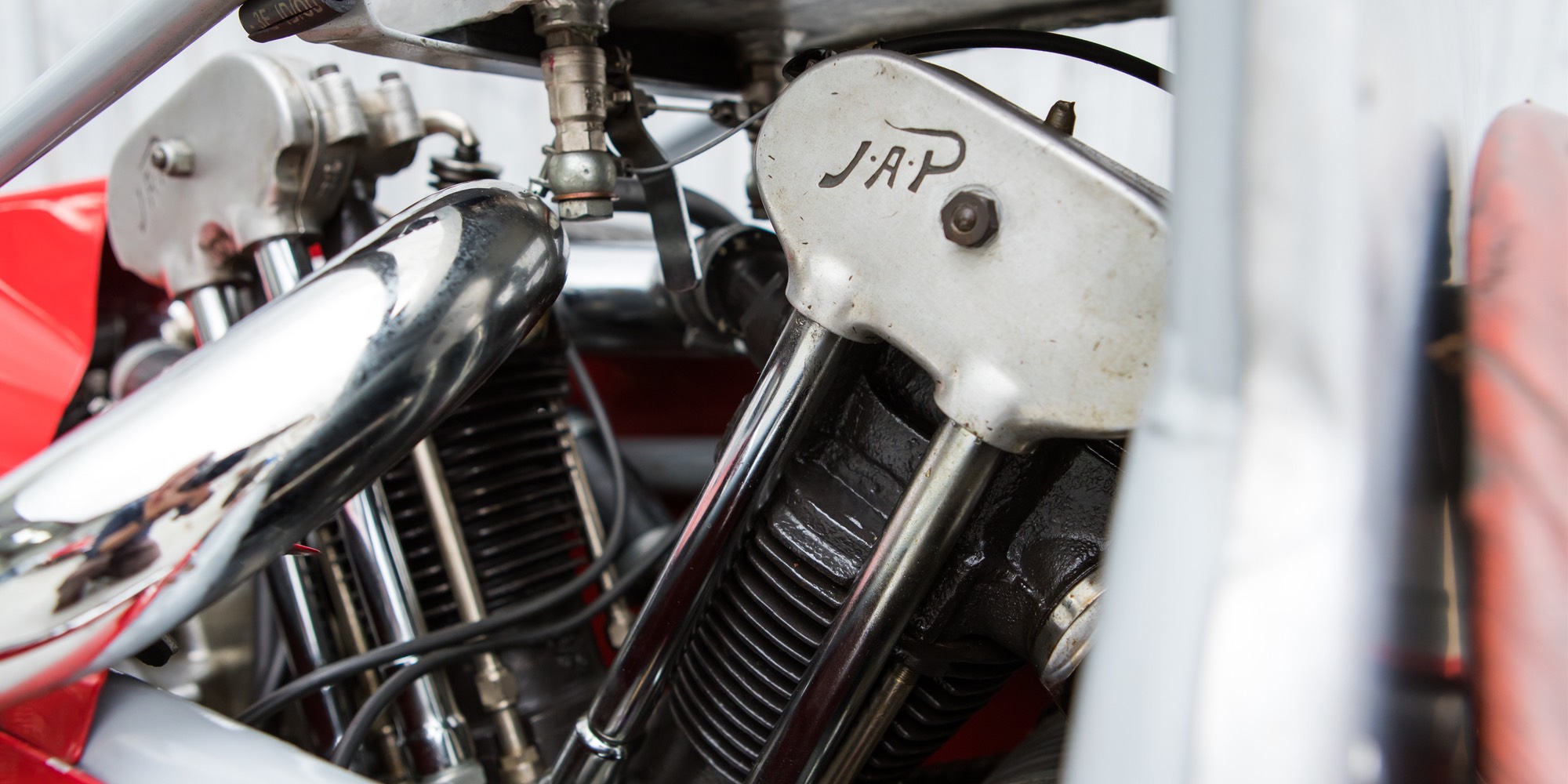 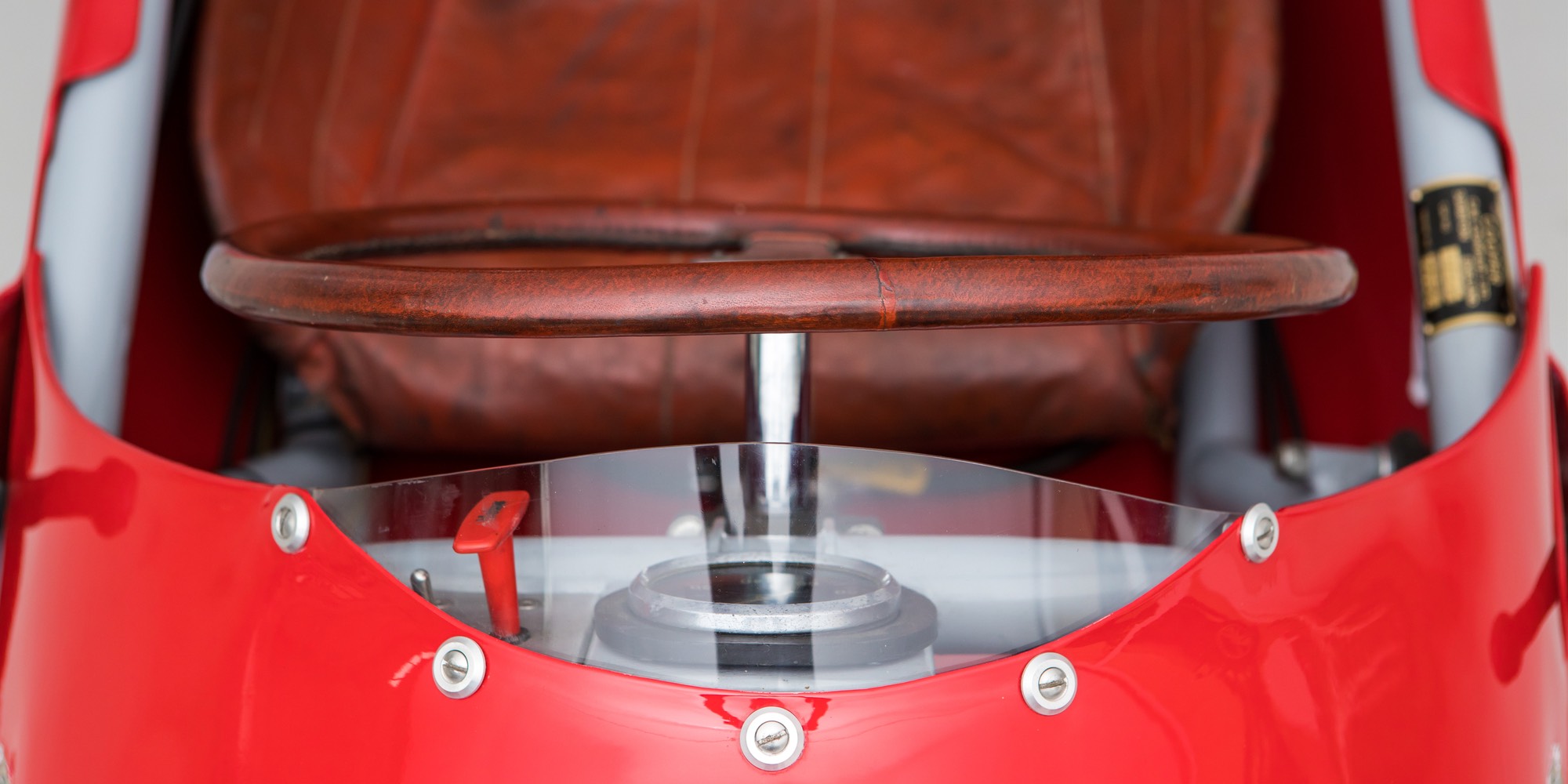 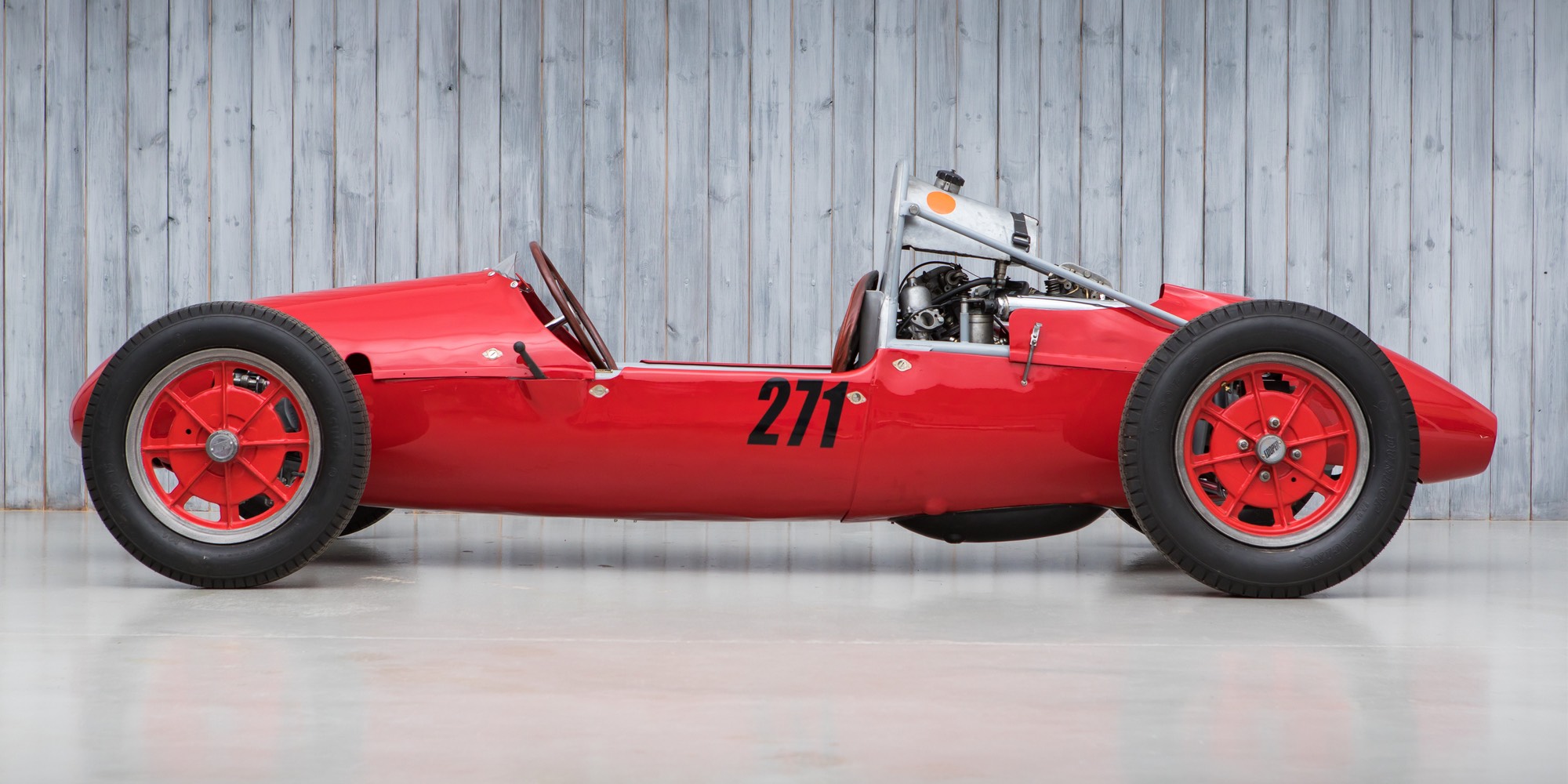 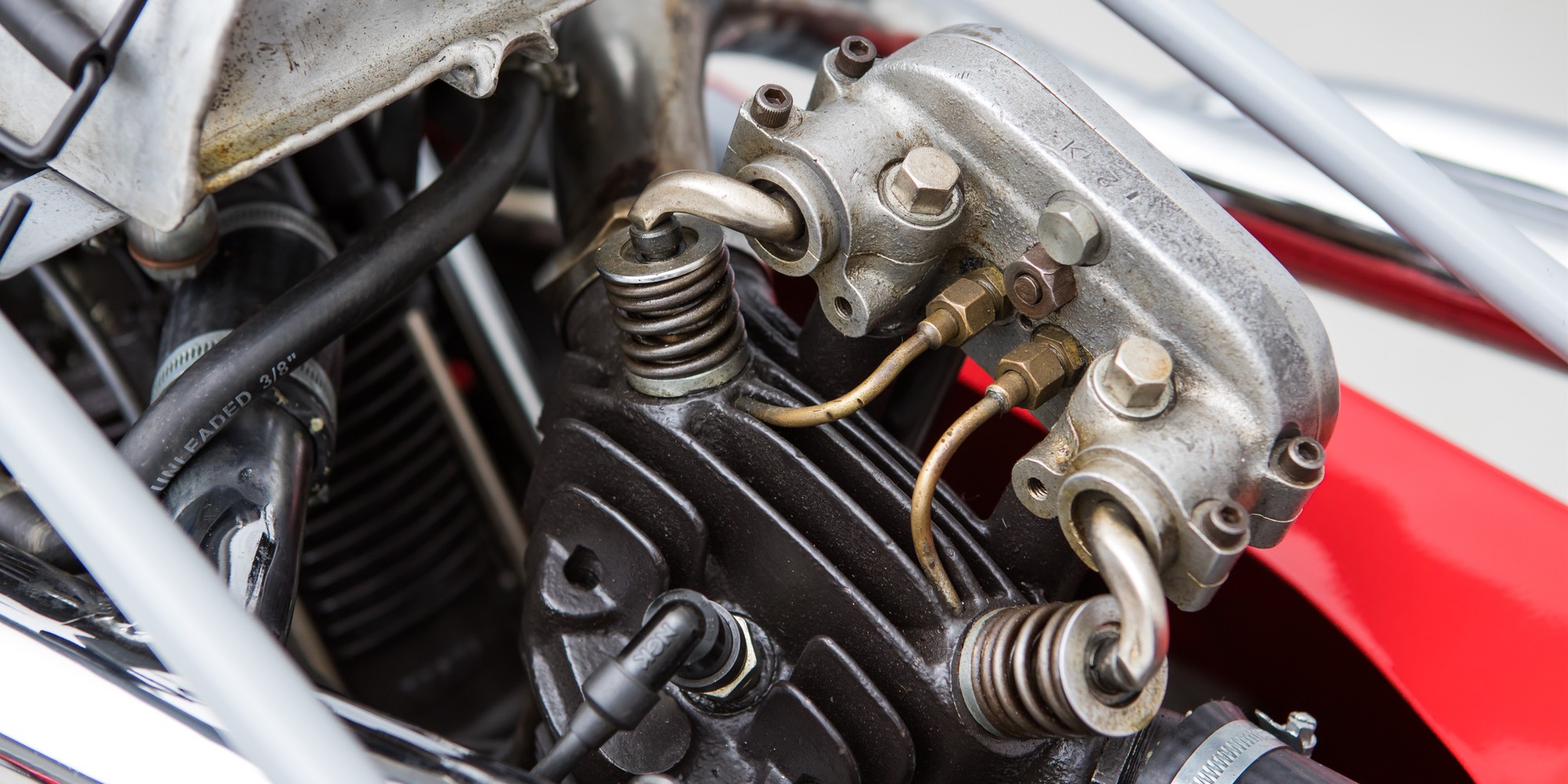 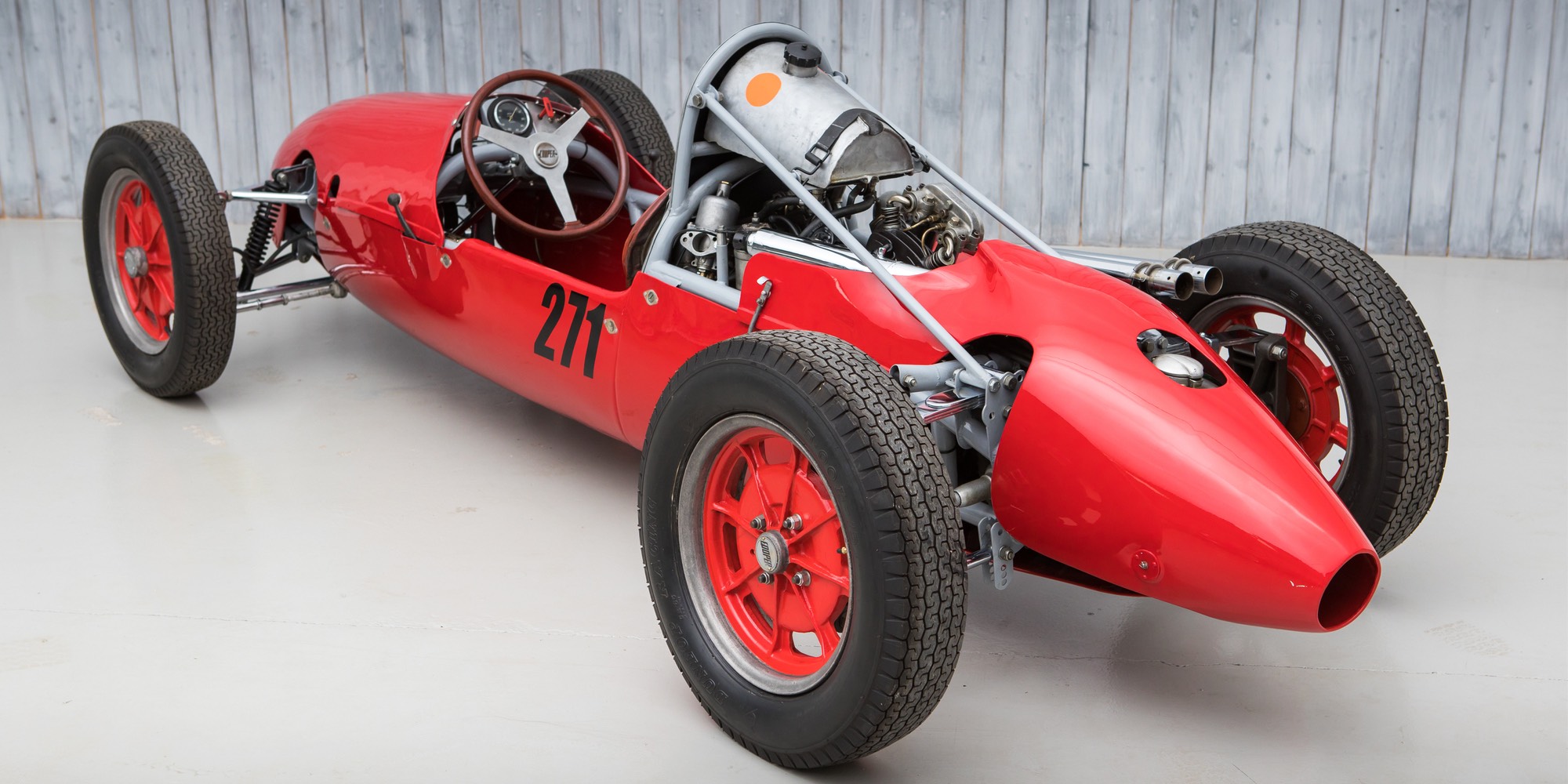 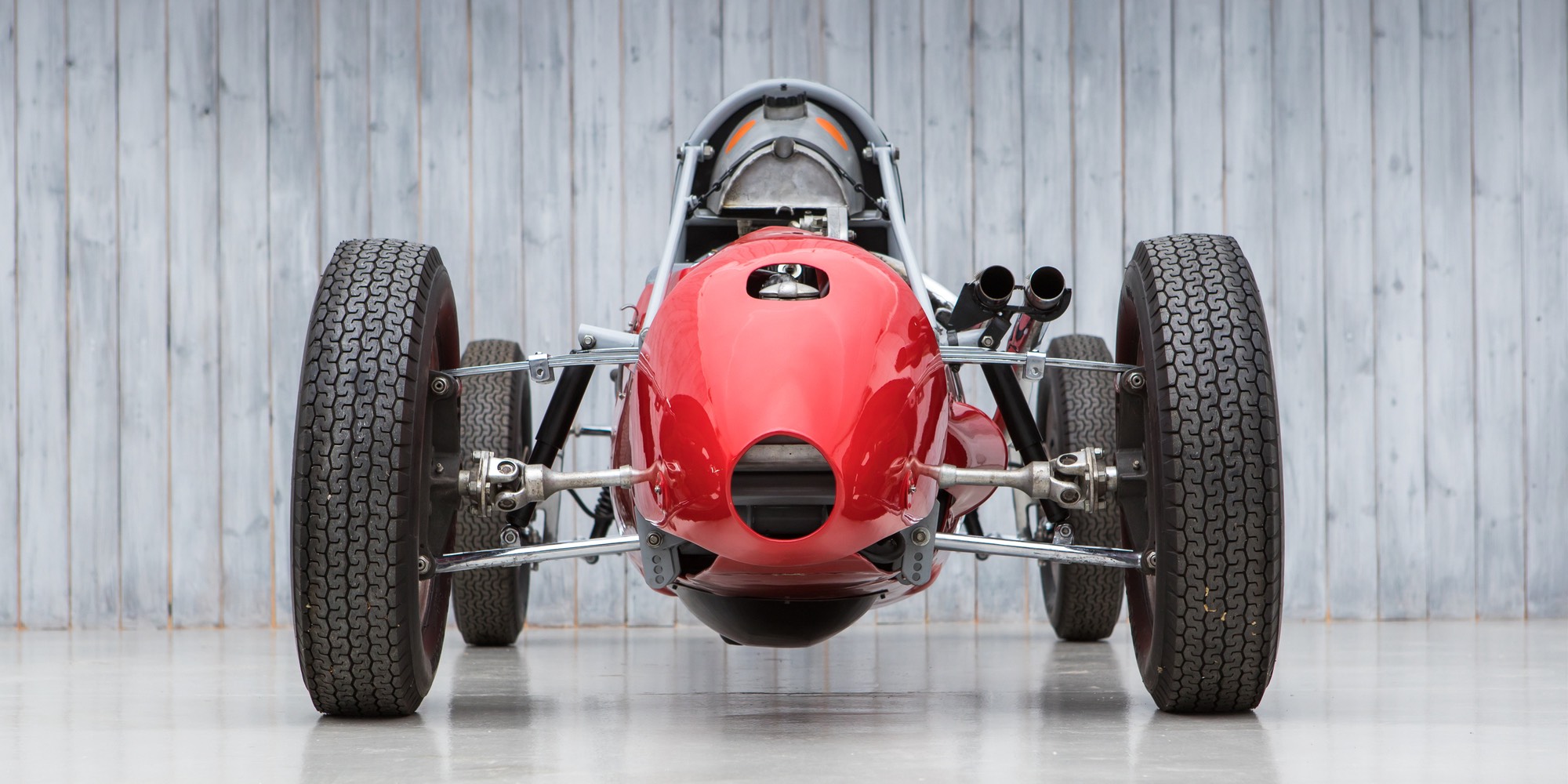 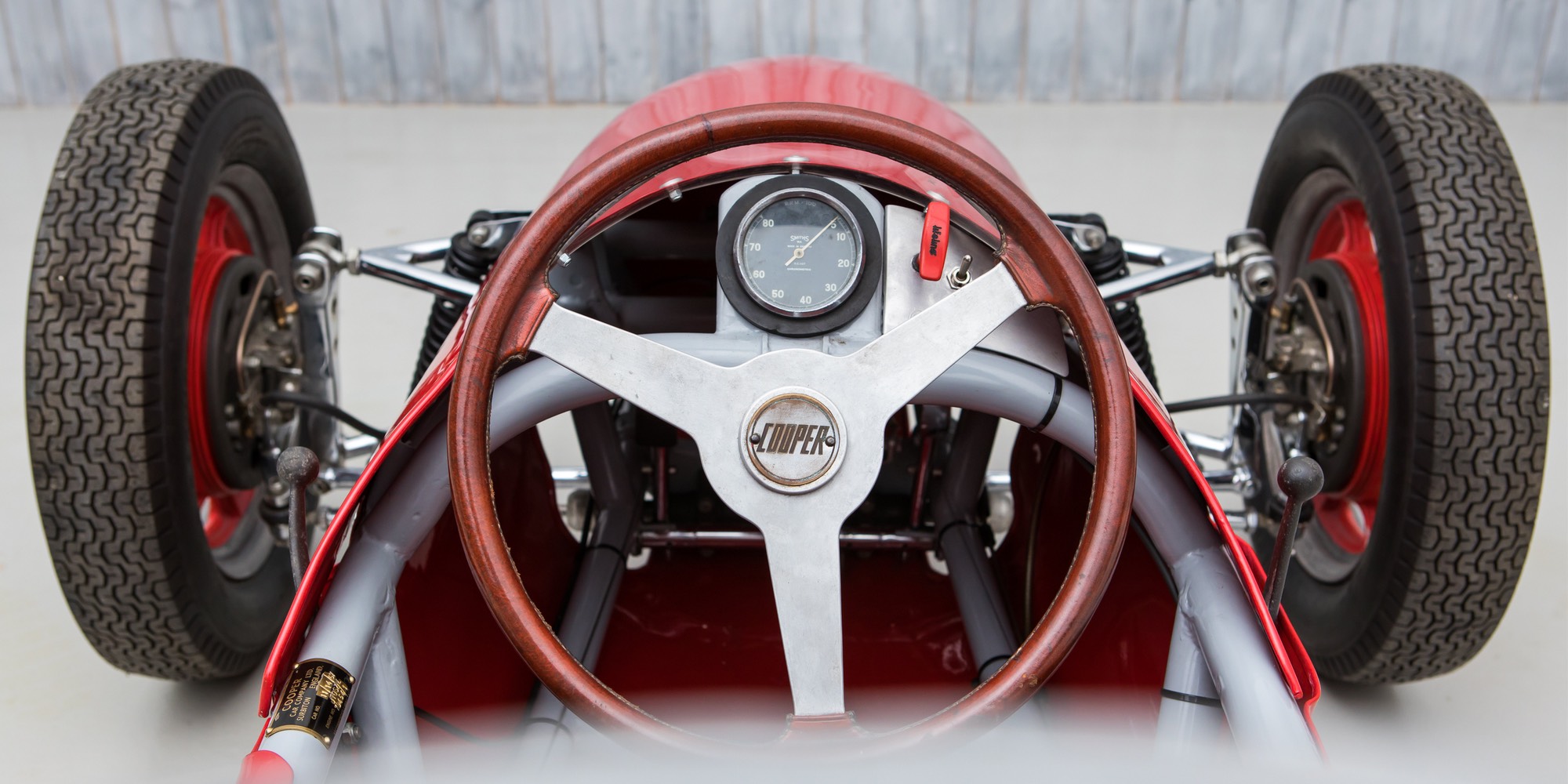 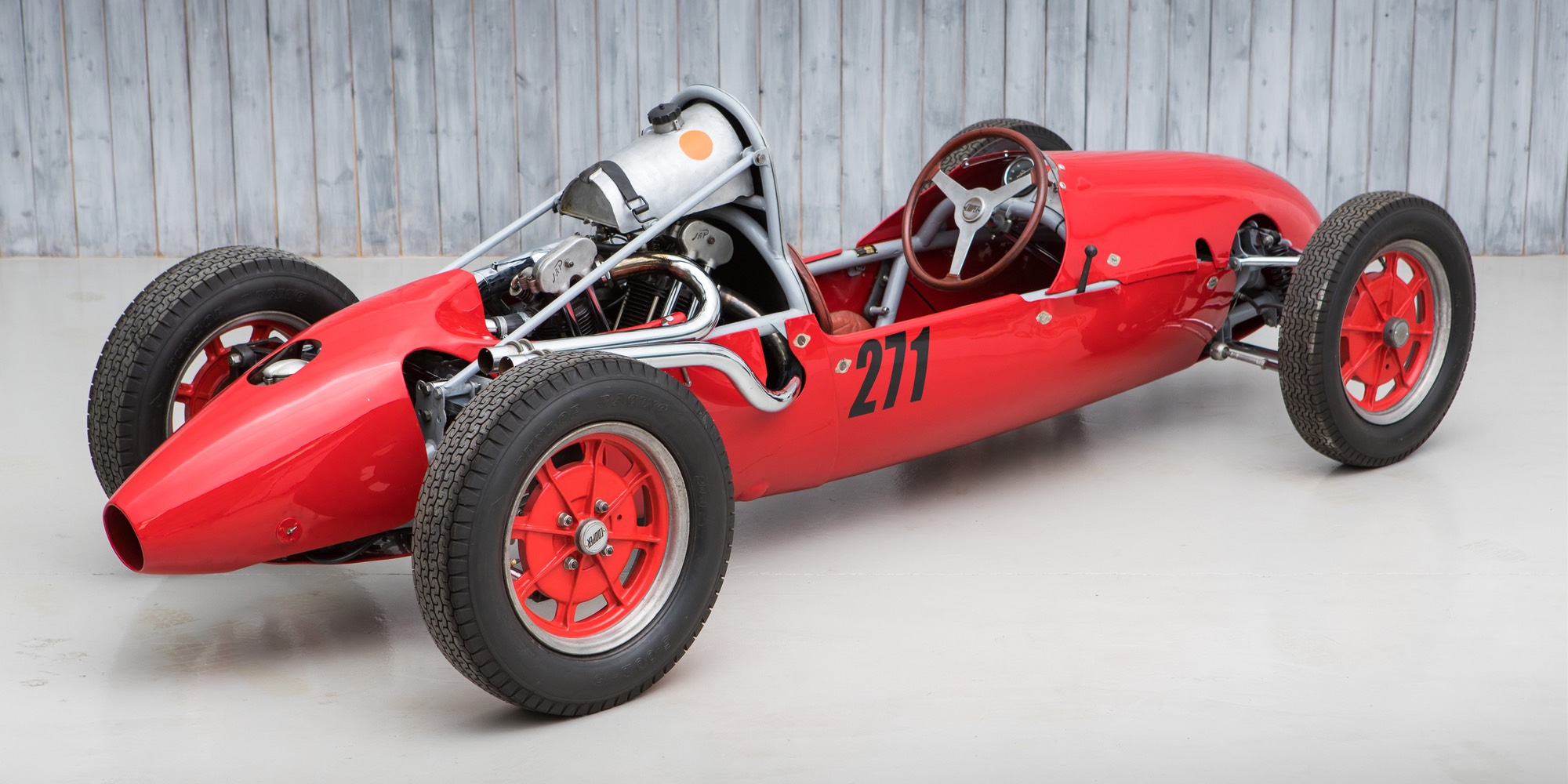 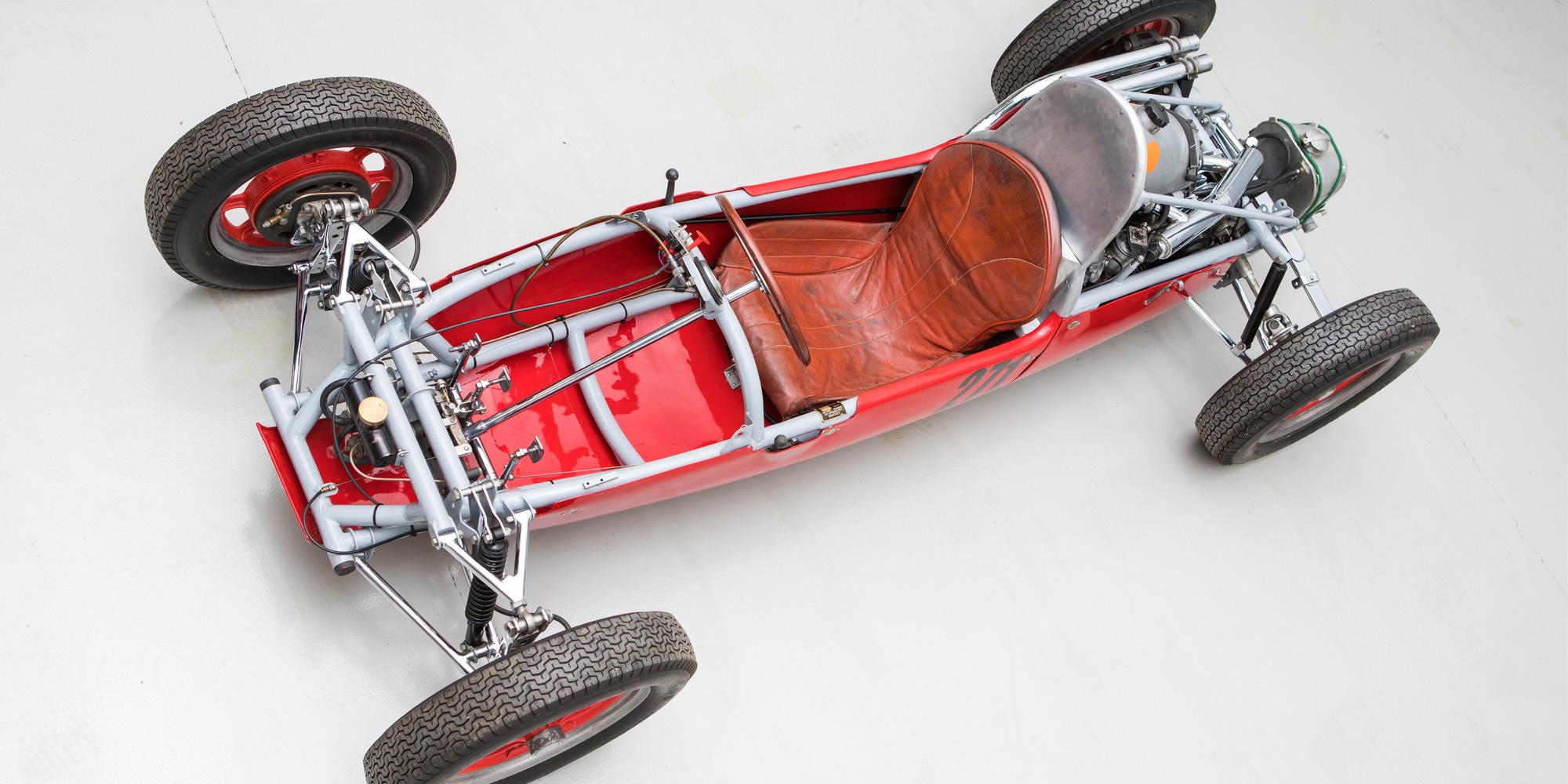 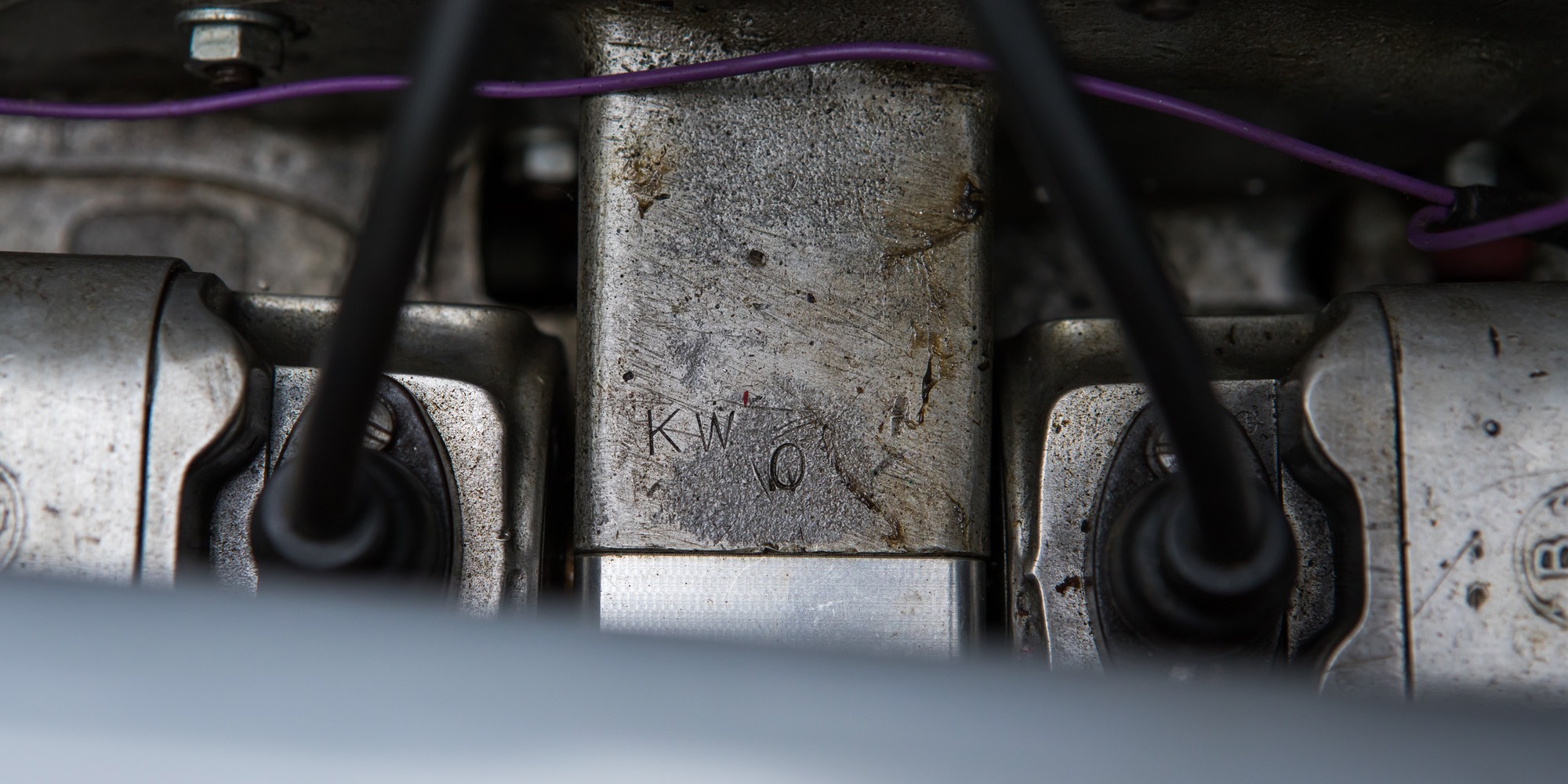 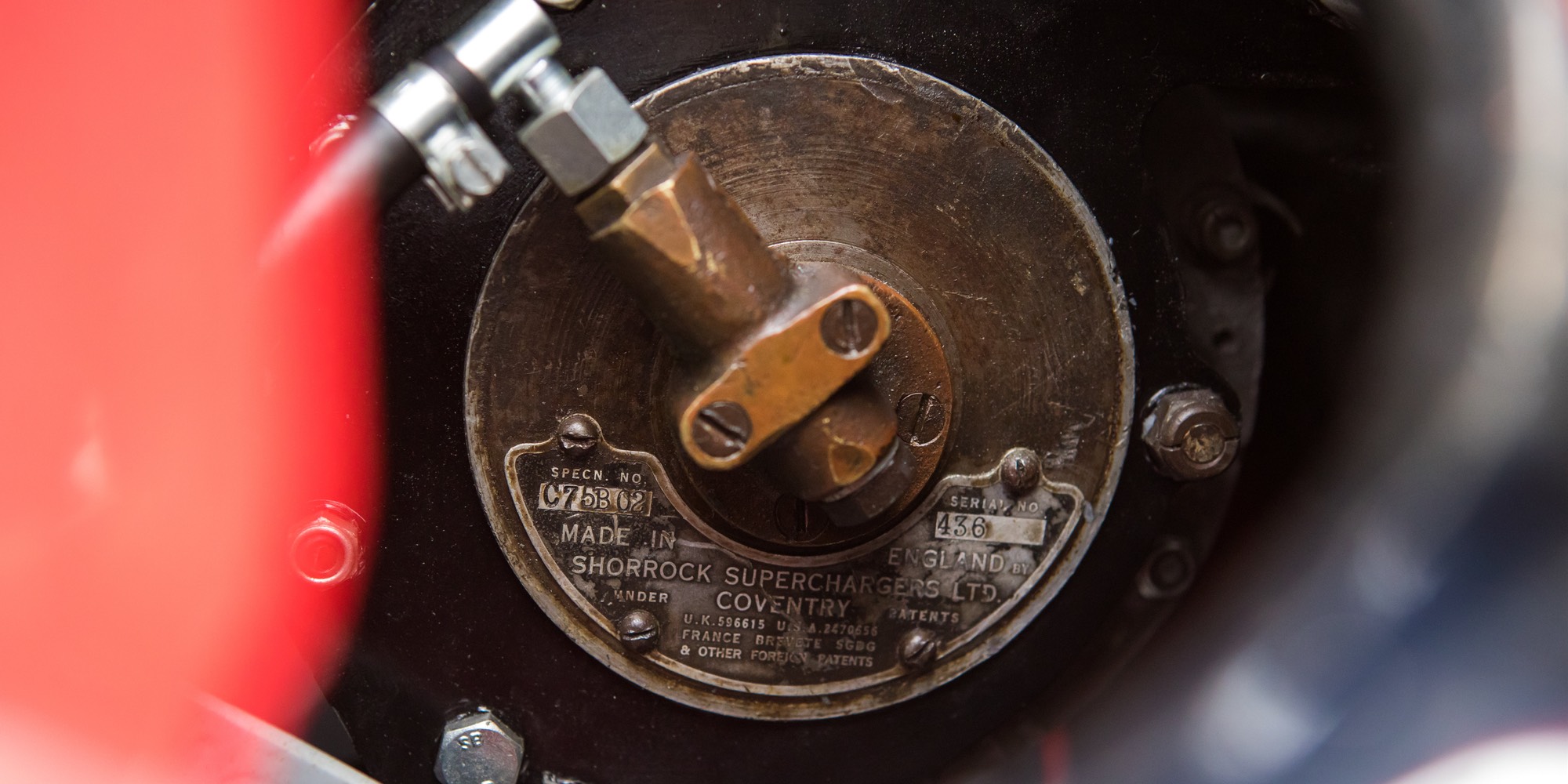 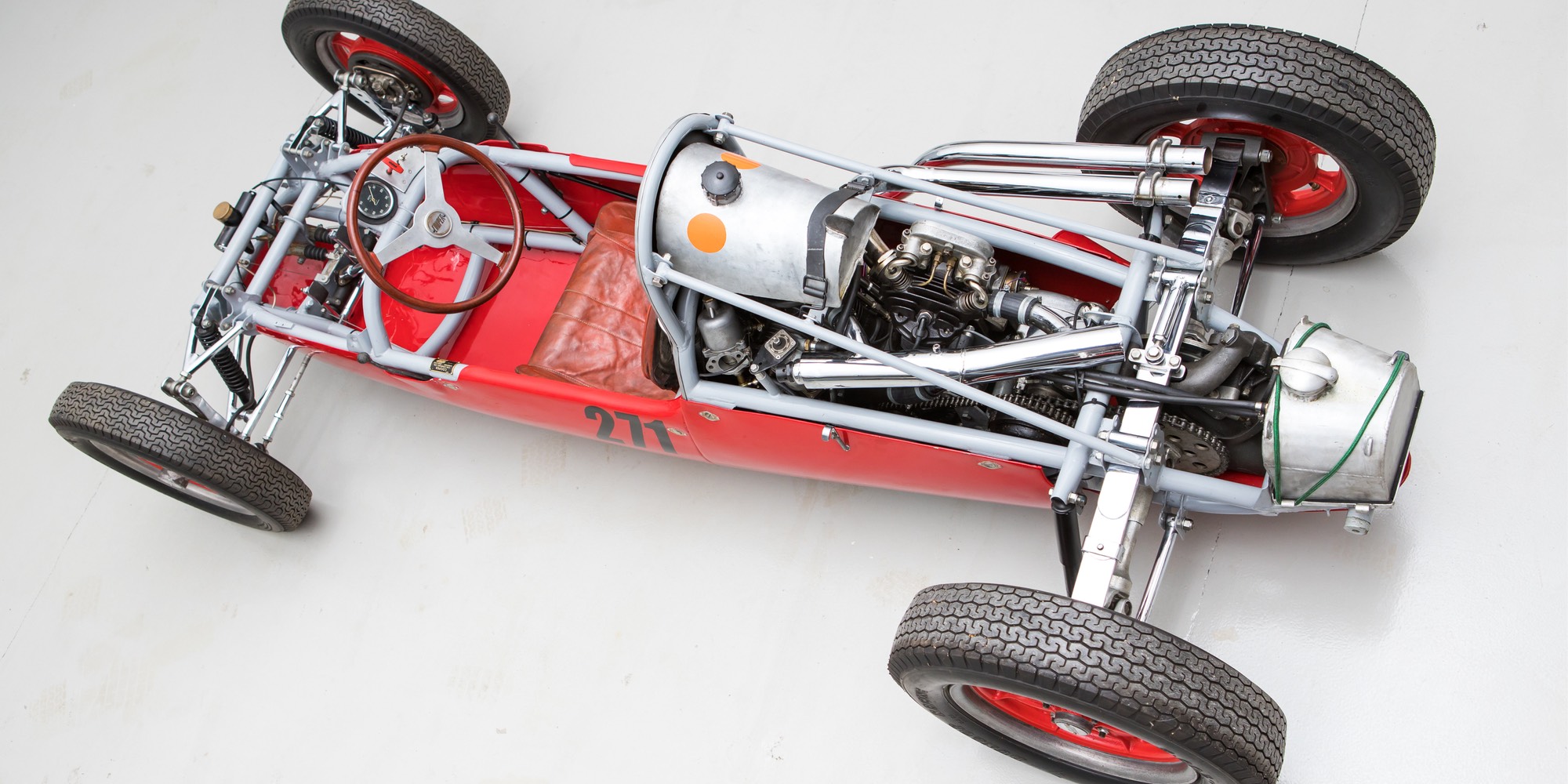 The Cooper Car Company, a household name today, was formed in December 1947 by father and son Charles and John Cooper to field interest in their own car. The duo had been competing in the emerging motorbike engined 500cc formula after the conclusion of the Second World War, and constructed their own prototype using two Fiat Topolino front ends joined together, and most notably, fitting the motorbike engine behind the driver, where the accepted practice was for the engine to be front mounted.

Known as the Cooper 500, John Cooper and Eric Brandon raced two cars with success on track, in hillclimbing and speed trials. The impressive results led to the demand for Cooper 500s by others, and orders were soon taken. The two prototype cars became known at the T2 and T3, and the first production run came in 1948 with the 500cc racer named the MkII, in the series which became known as 500cc Formula 3.

From the box section ladder chassis in the MkII, the later MkVI of ’52 featured Cooper’s first multi tubular chassis which boasted increased stiffness with reduced weight over the former design. The MkVI also incoporated light magnesium castings for the suspension uprights and final drive housing. For the Mk VIII of ’54, the chassis design was better furthered with the introduction of curved top tubes, curved leaf springs and a smaller, lower body. Adapted models for the larger V-Twin engines of 998cc and 1,100cc were also made, and featuring a longer wheelbase these cars were popular in hillclimbing.

1955 saw the introduction of a single rear inboard disc brake in place of wheel based drums in the Mk IX, along with flatter leaf springs which dropped the overall ride height of the car. This design was further updated for the Mk X in 1956, and the Mk XI in 1957. Such was the popularity of these Cooper cars, that the company became the largest specialist manufacturer of racing cars post-war.

The car we have the pleasure of offering for sale today is chassis number 11/14/57. A Mk XI built in 1957, 11/14/57 was bought new by Mr. J.P. Cavill in May 1957. Cavill had previously raced on two wheels, and the Cooper would be his first adventure into cars. Later, Cavill turned his hand to helping other drivers succeed, and supported drivers such as Tony Keele and Mike Wilds, while his son John also continued this patronage with the backing of Formula 1 driver Jonathan Palmer, Tim Sugden and IndyCar Champion Will Power.

It is thought that Cavill sold the Cooper on to up-and-coming star Trevor Taylor, who in turn sold it to the current owner in 1960. It is a possibility, with research still ongoing, that Taylor may have raced the Cooper himself.

Competing in the British Championship, Taylor began the season with second to Vanwall Formula 1 driver Stuart Lewis-Evans at Goodwood in the Earl of March Trophy, before winning at Mallory Park in May. At Brands Hatch on the 1st June, Taylor won again, a feat he repeated a month later in the Redex Trophy at Crystal Palace. At Silverstone for the Commander Yorke Trophy in August, Taylor won again, and he took second at Snetterton in the Archie Scott-Brown Memorial Trophy.

At Goodwood on the 27th September, Taylor was second, and to round off the year he took second place once more at Brands Hatch in the Worlds Sports Trophy. Taylor’s impressive results through the ’58 season won him the British Formula 3 Championship.

Having stepped up to a Formula 2 Cooper in 1959, Taylor moved on from Formula 3. For 1960, Taylor was offered a works Formula Junior supported drive at Lotus using his own 18, as teammate to Jim Clark, and they shared the British Formula Junior title at the conclusion of the season.

When the current owner, Bryan Eccles bought the Cooper MkXI, in the first of his three ownerships, it was without engine and it’s possible that the engine previously fitted may have been retained by Francis Beart. Eccles had been inspired to take up hillclimbing having watched Ken Wharton at the wheel of ERA R4D. In 1957, Eccles had acquired the Ken Wharton, British Hillclimb Championship winning lightweight Cooper MkIV from Tommy Norton who had acquired Wharton’s collection, and had been campaigning it on the hills.

With the addition of the MkXI to his garage in 1960, the rare supercharged 998cc JAP V-Twin engine was removed from the MkIV and fitted into the better MkXI rolling chassis, before the engineless MkIV was sold to Sweden. This proved to be a formidable combination, with Eccles going on to take the V-Twin record at Shelsley Walsh with a time of 34.92 seconds. Another alteration to the car was the addition of front wishbones and coil springs to replace the standard leaf spring, which was noted as a vast improvement.

In 1963, when he had acquired a Cooper T53 Climax Tasman car, Eccles sold the MkXI to Wally Cuff in Somerset. Eccles bought the MkXI back from Cuff in 1967, though by this time the engine had a broken con rod. Circumstances changed, and with an imminent move to Rhodesia in 1969, the MkXI was sold to Fred Smith in Birmingham. Smith didn’t use the MkXI at all during his ownership, and sold it on to John Tibbenham.

Tibbenham had the engine rebuilt, along with the chassis and body repainted, but did not progress the rebuild further. Eventually, the MkXI was bought back by Eccles in 2009, to begin his third and current ownership of the car. Ewan Cameron of Cameron Engineering was tasked with restoring the MkXI to its former glory.

With the rebuild completed in 2014, the MkXI completed a special historical run at Shelsley Walsh in August 2015 with Eccles behind the wheel once more, 52 years after the pairing last ascended the oldest motorsport venue in England.

Since 1960, the MkXI has only been driven by Bryan Eccles and Ewan Cameron. Combined with first owner Jack Cavill, and possibly Trevor Taylor, that makes just four drivers over its 63 year life.

Today, the MkXI is presented immaculately thanks to the rebuild at Cameron Engineering, after which is has been sparingly used on only a couple of occasions. With a pedigree of noted drivers and motorsport personalities, both car and engine stand out as exceptional examples steeped in history on track and hill alike.