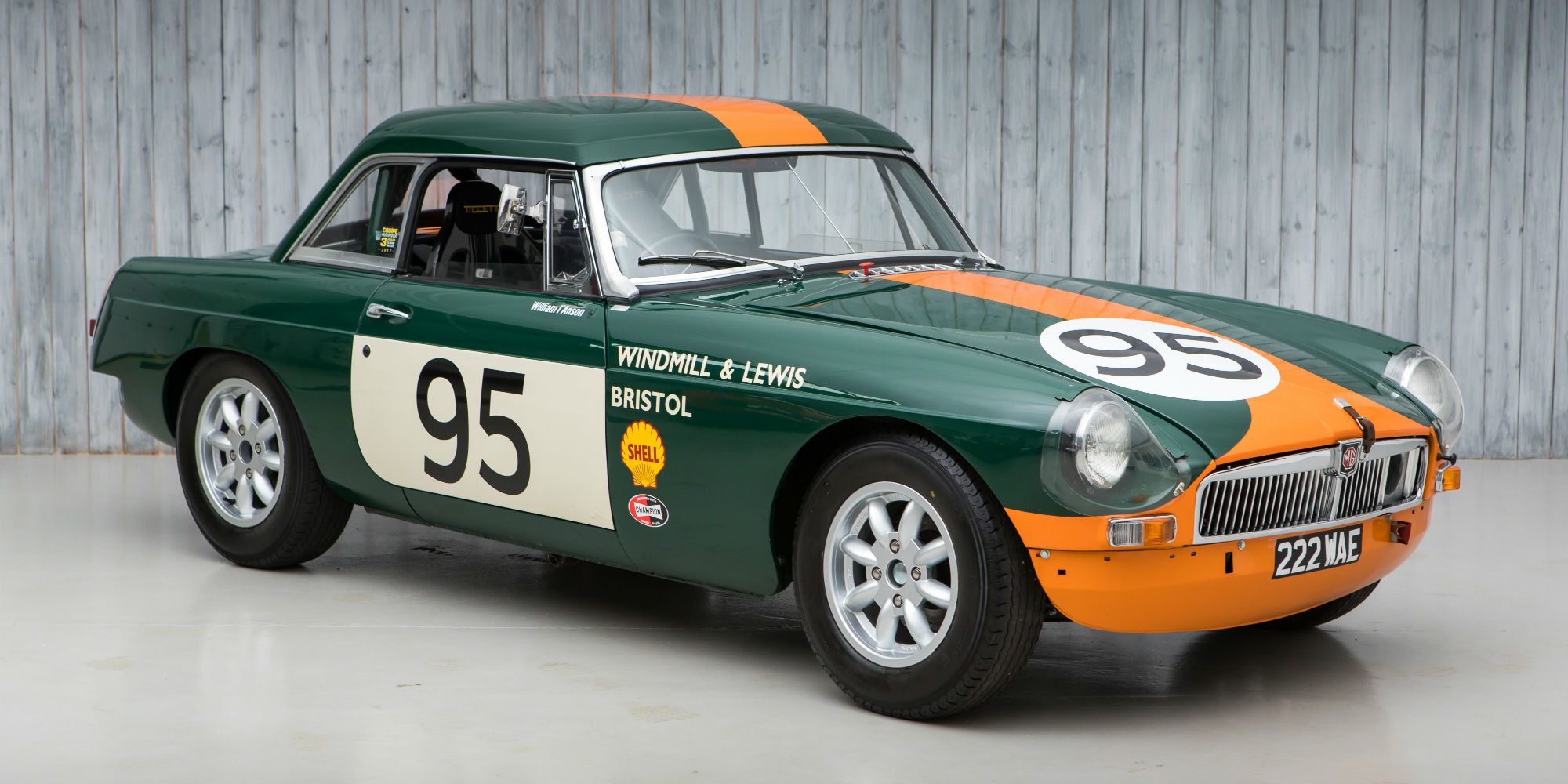 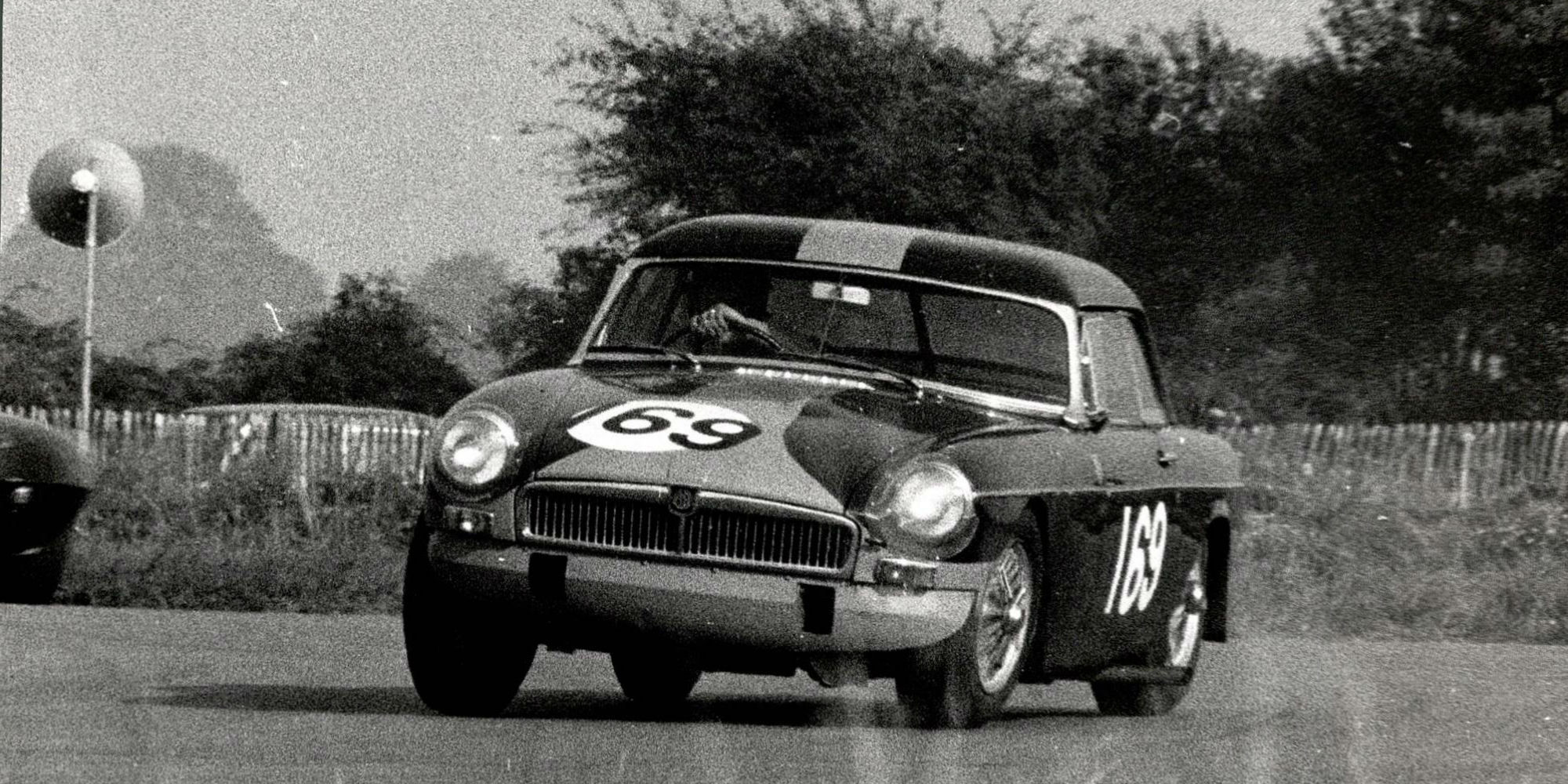 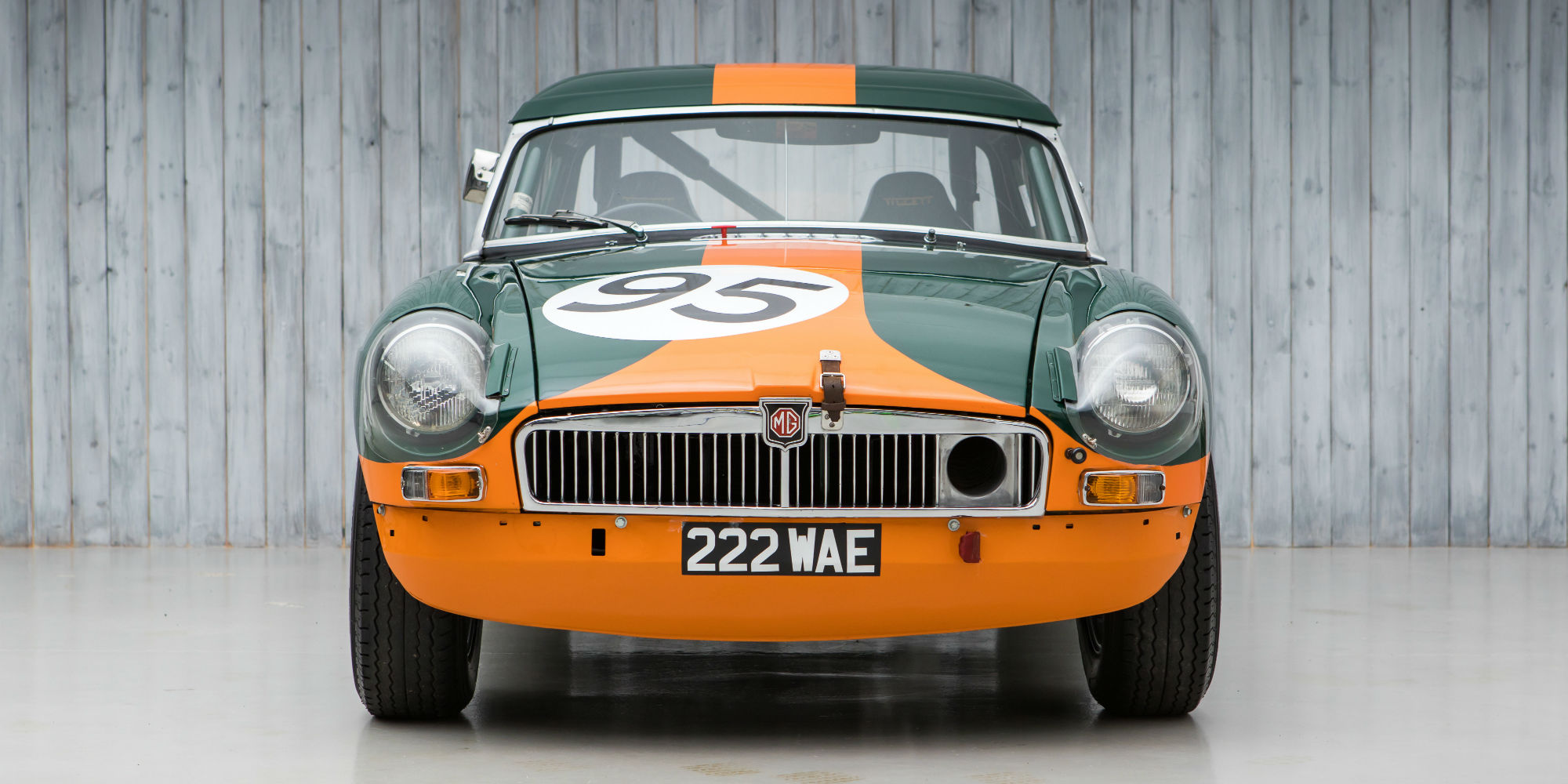 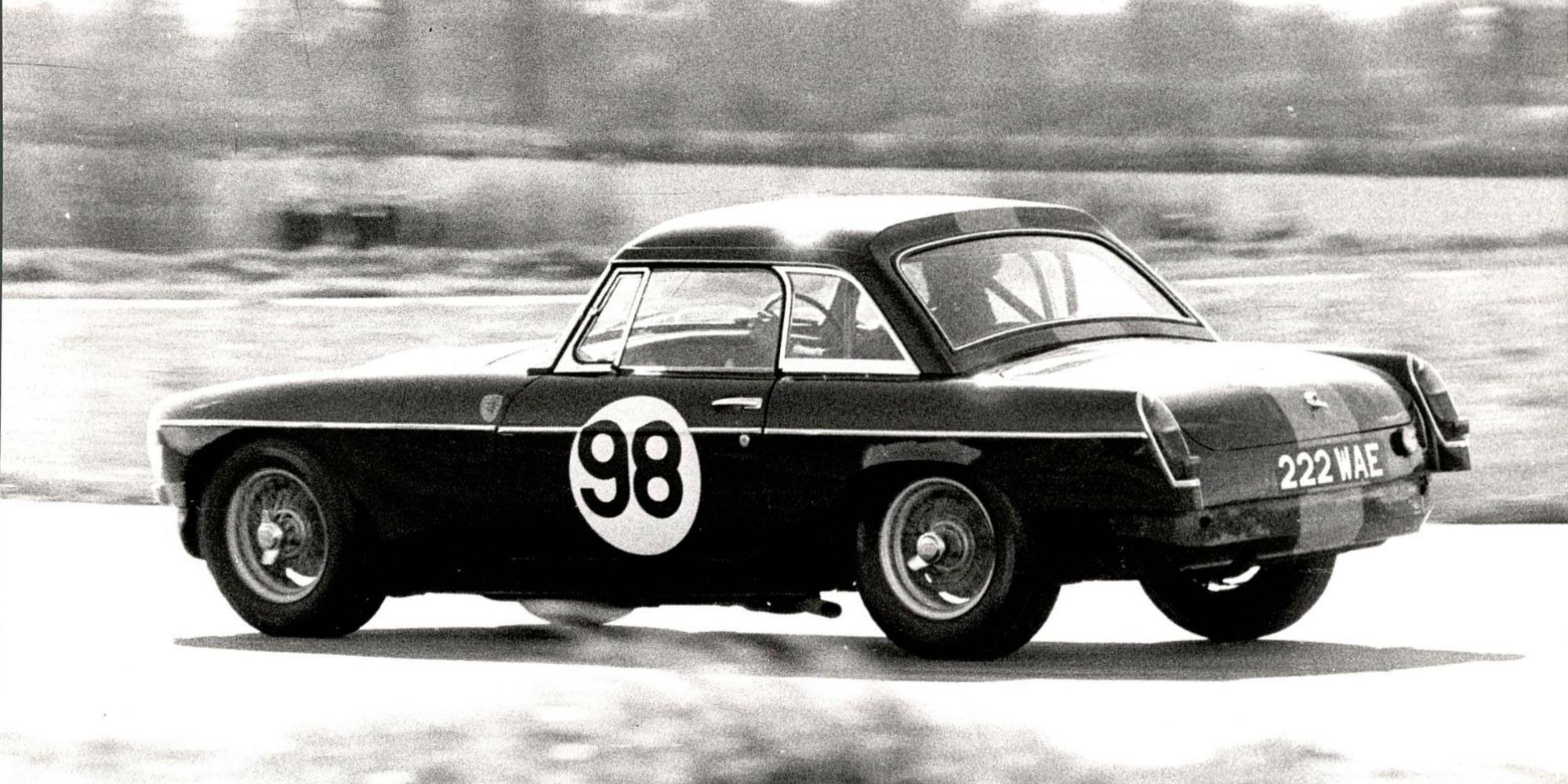 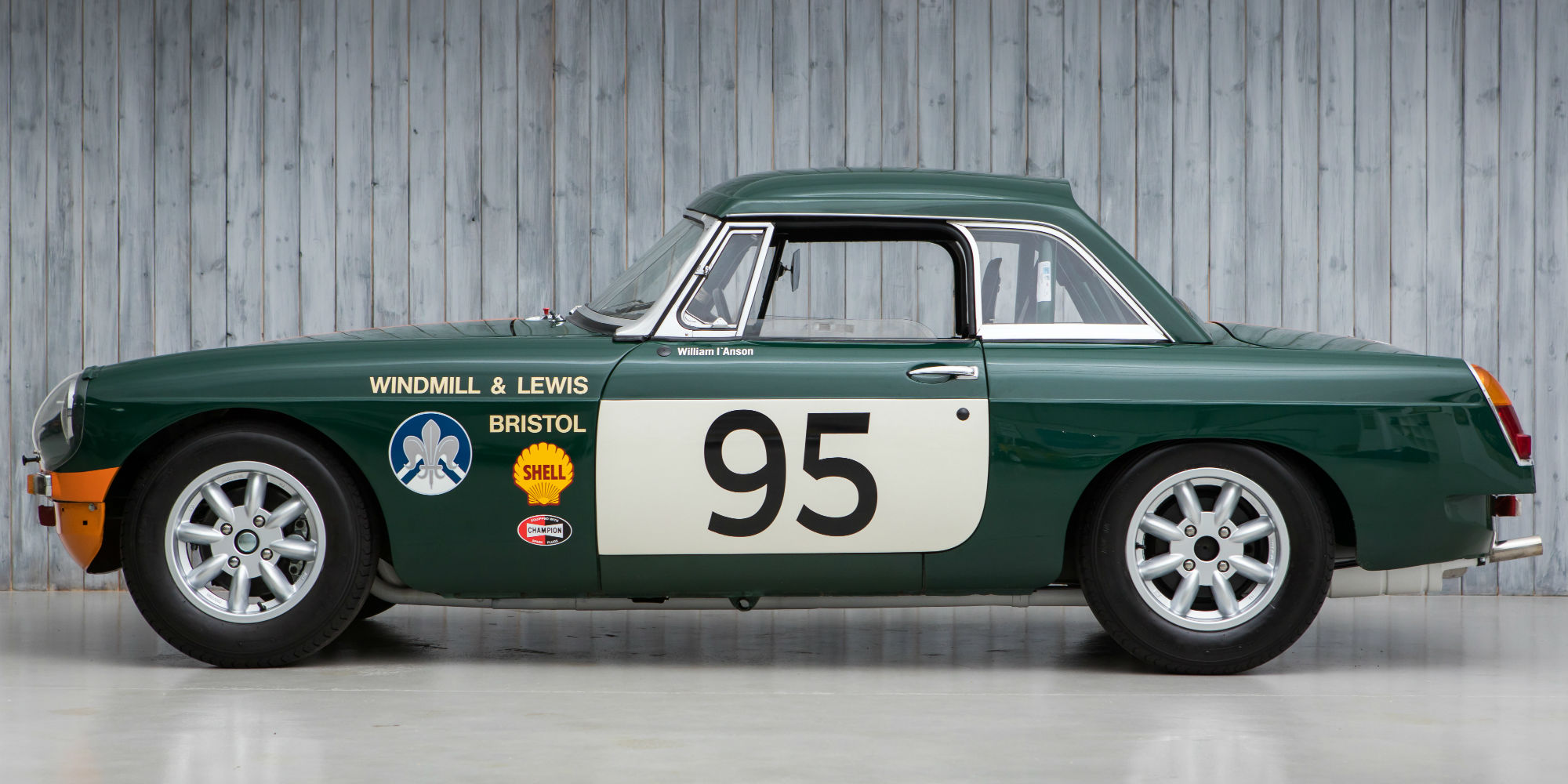 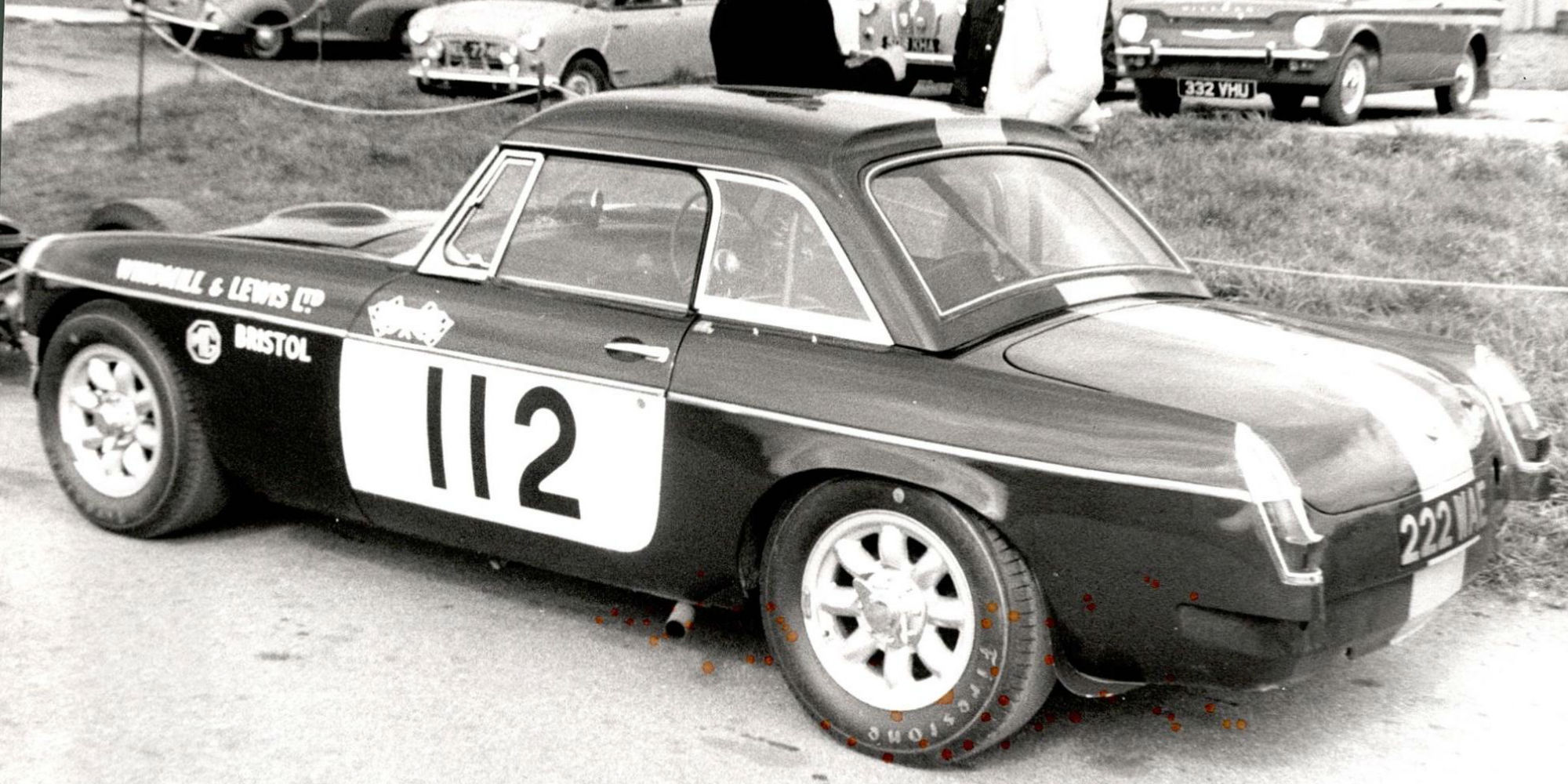 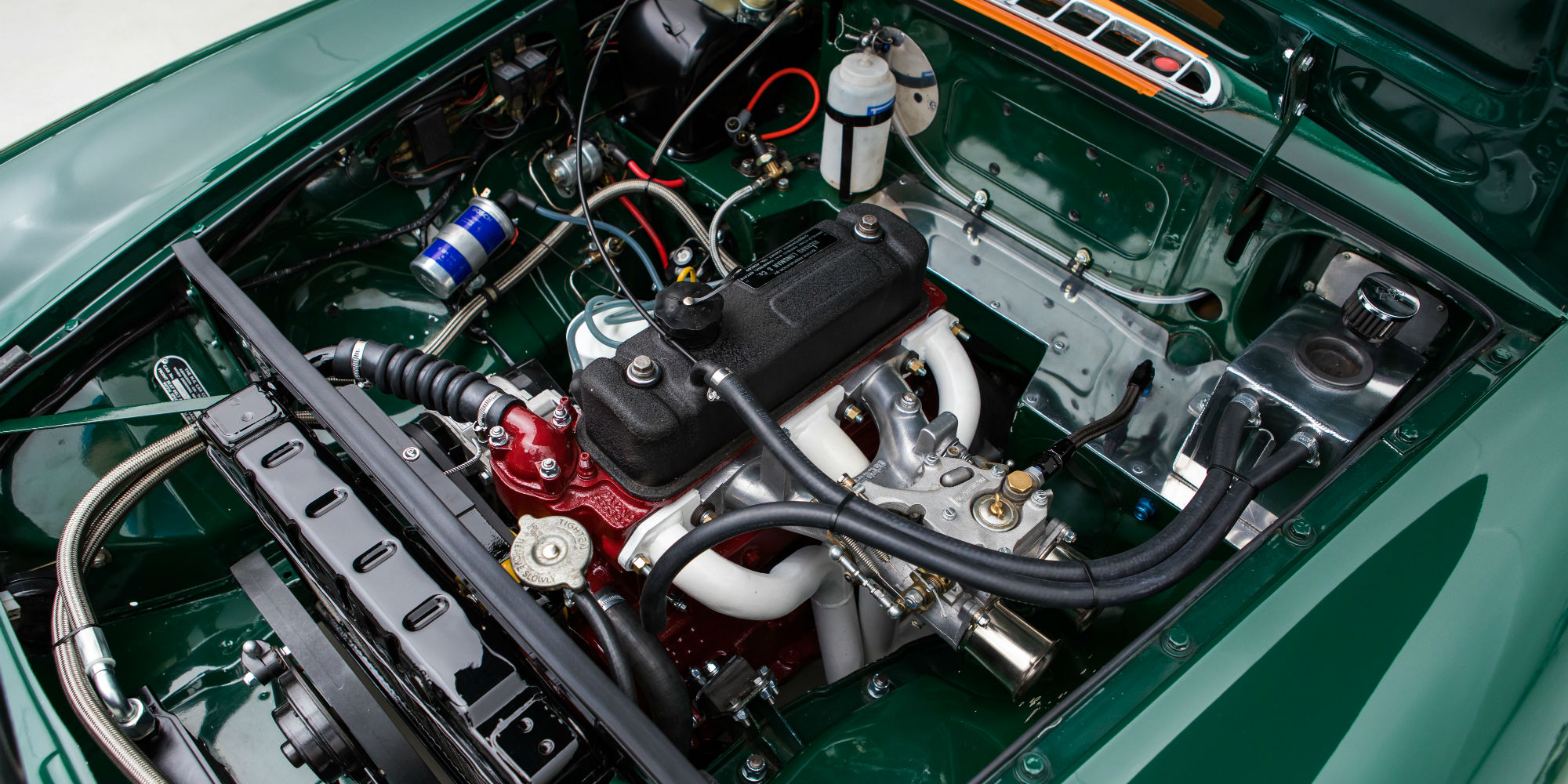 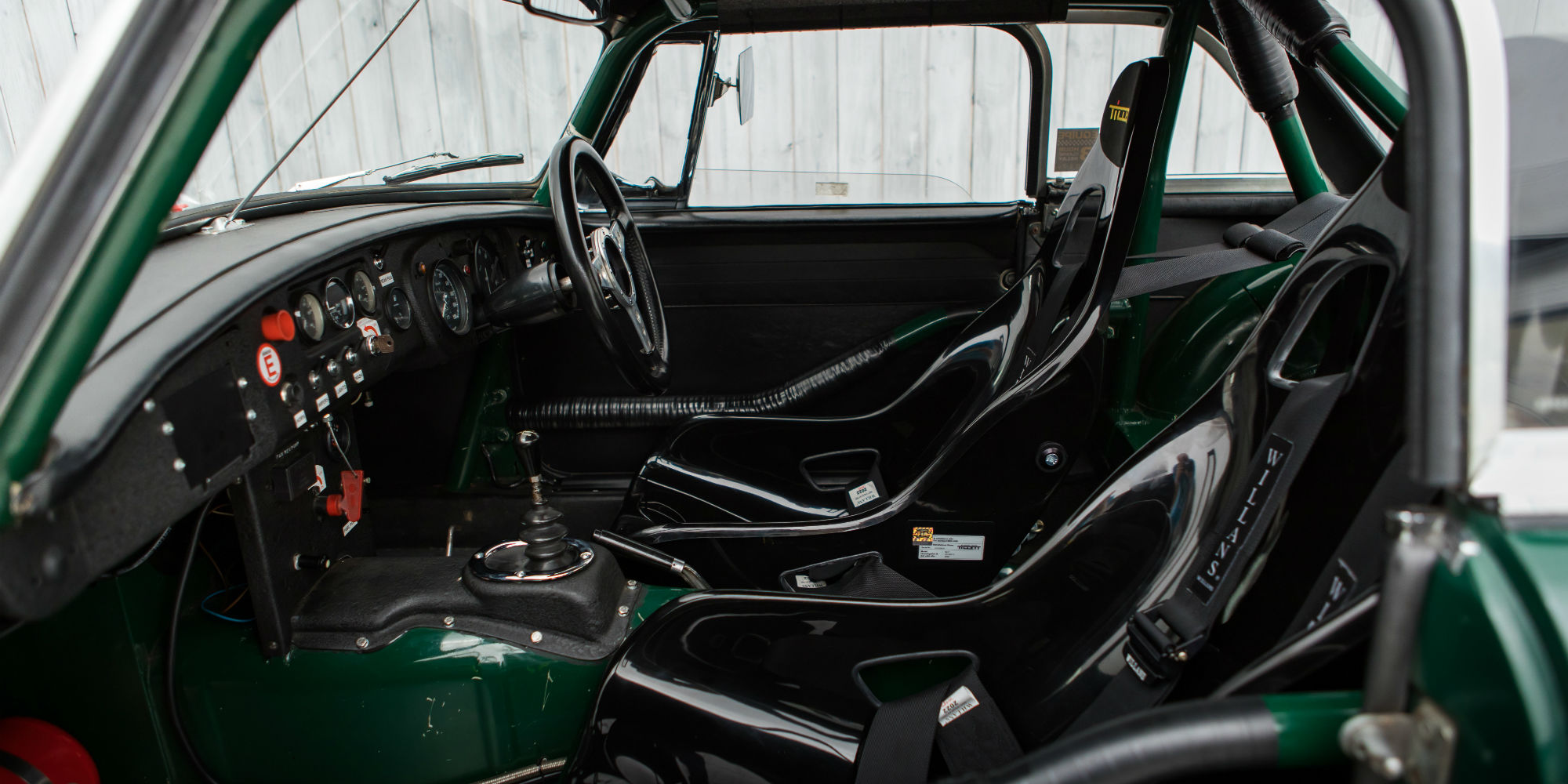 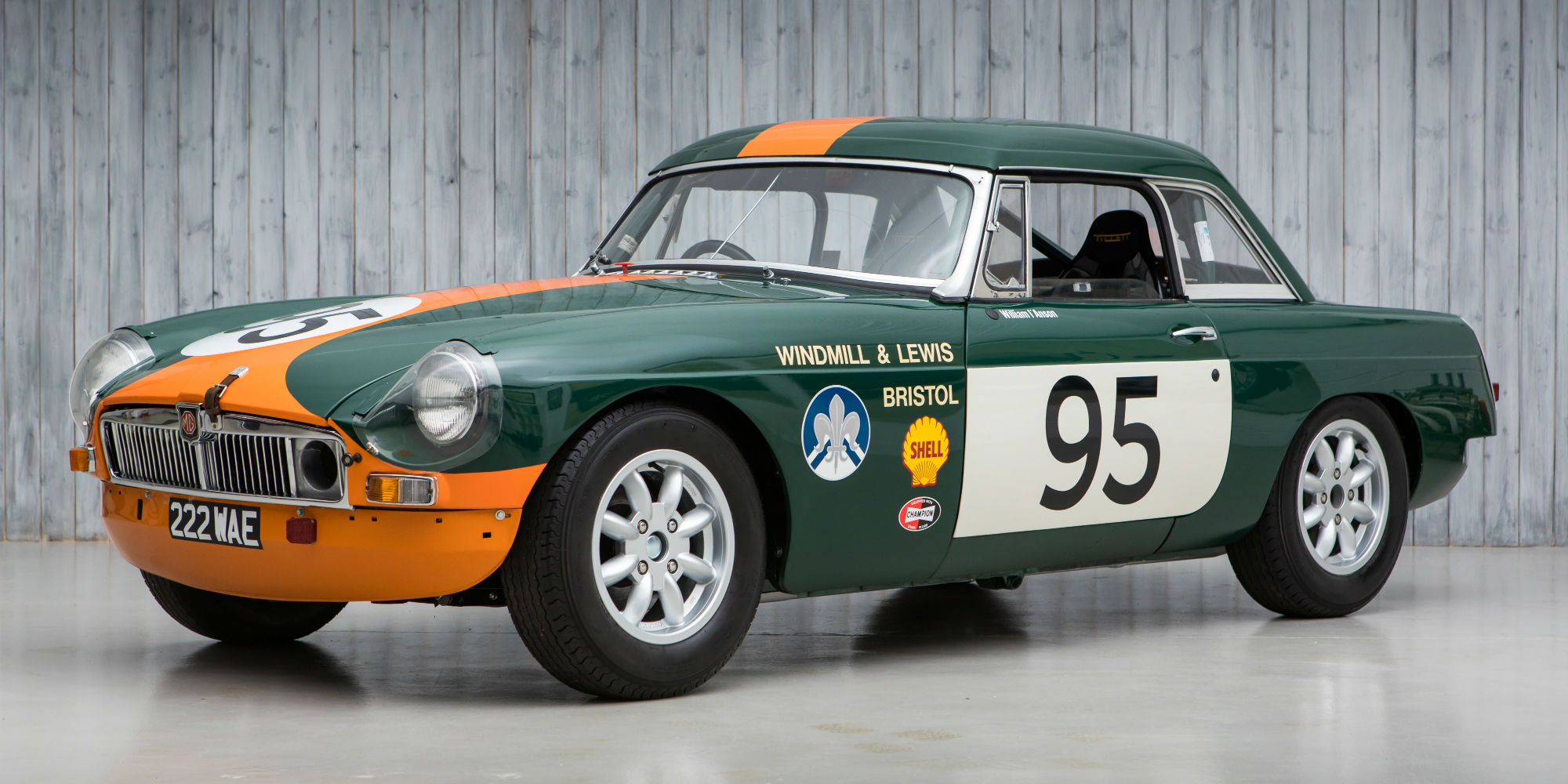 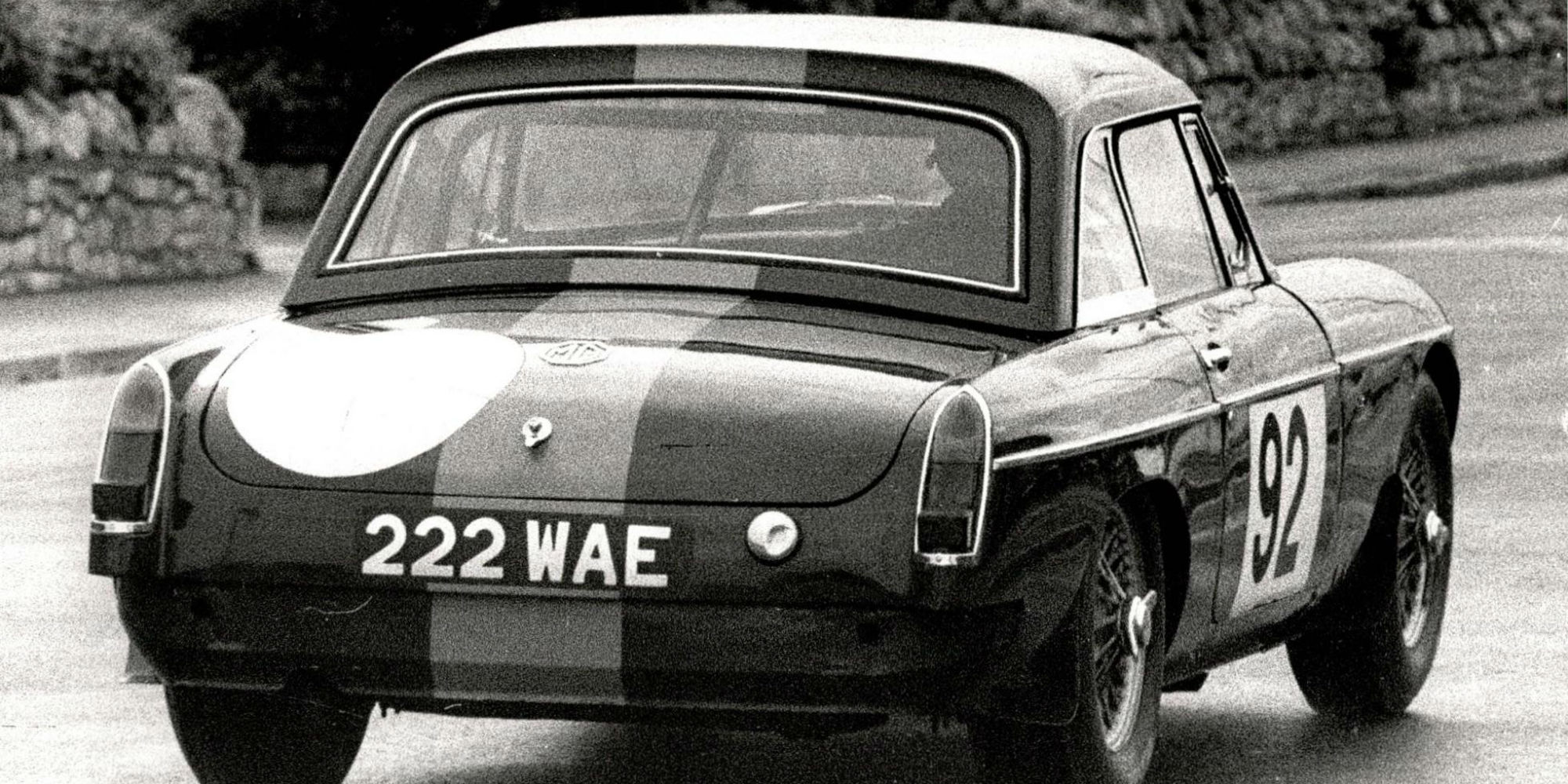 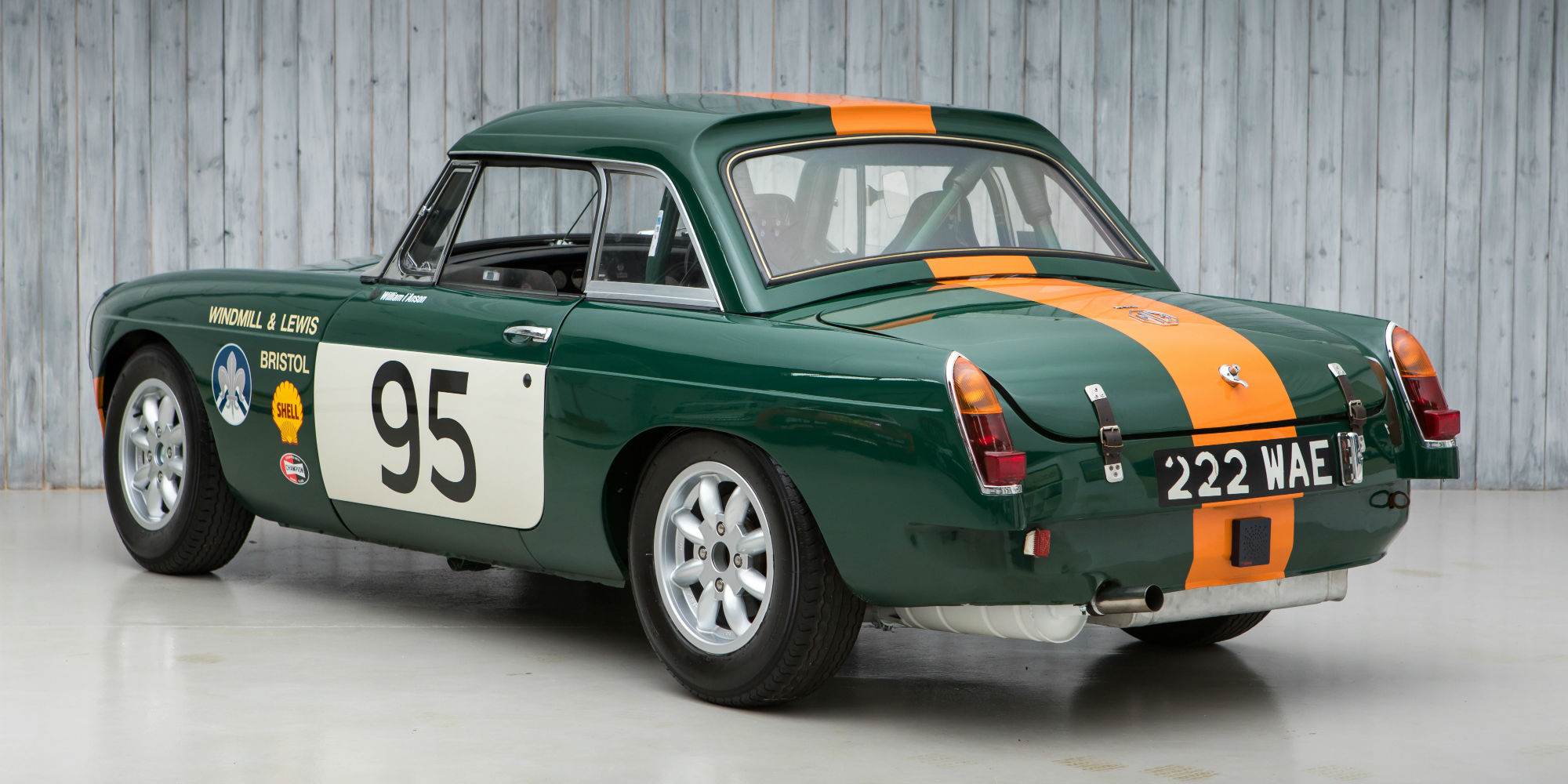 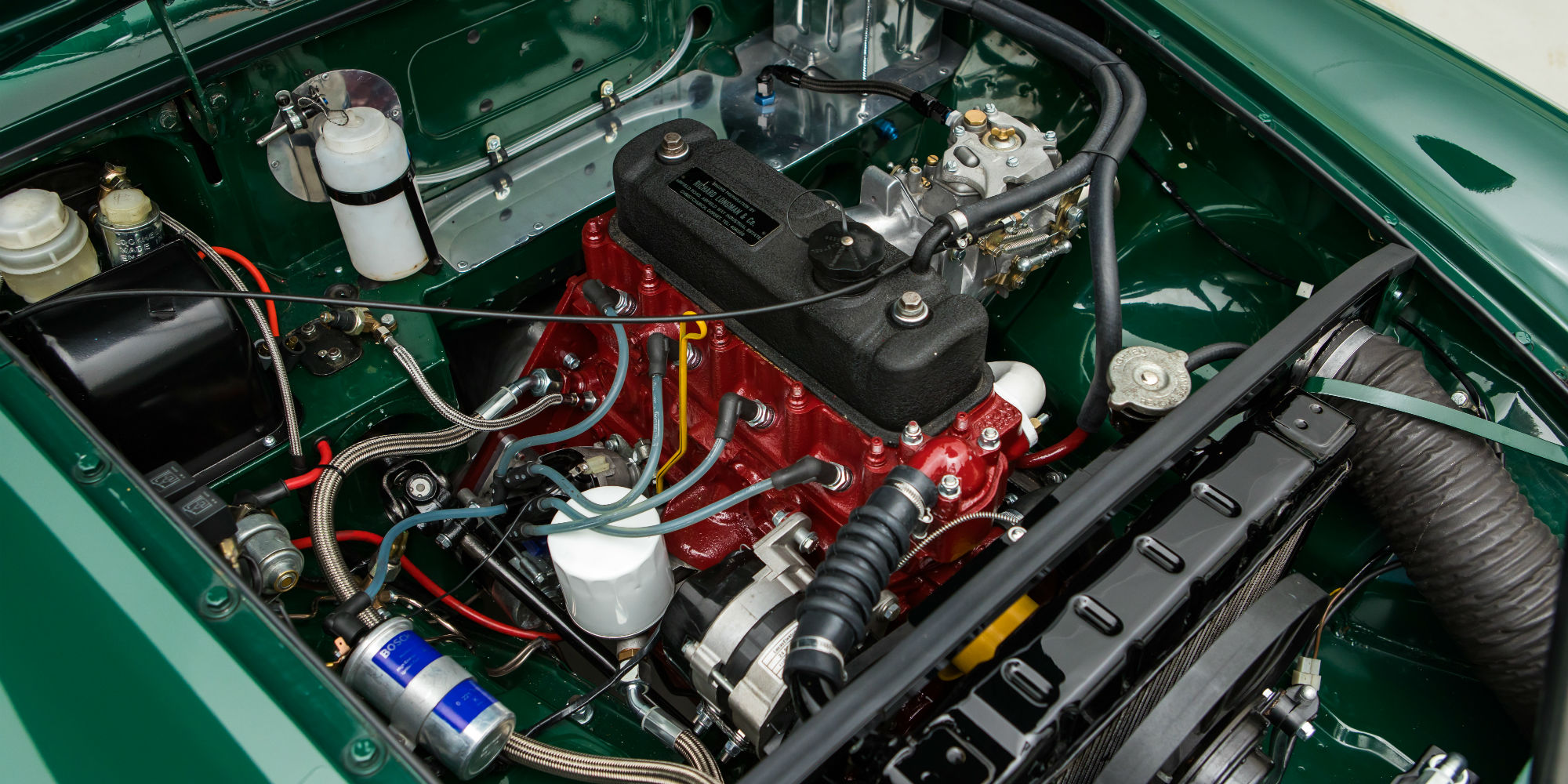 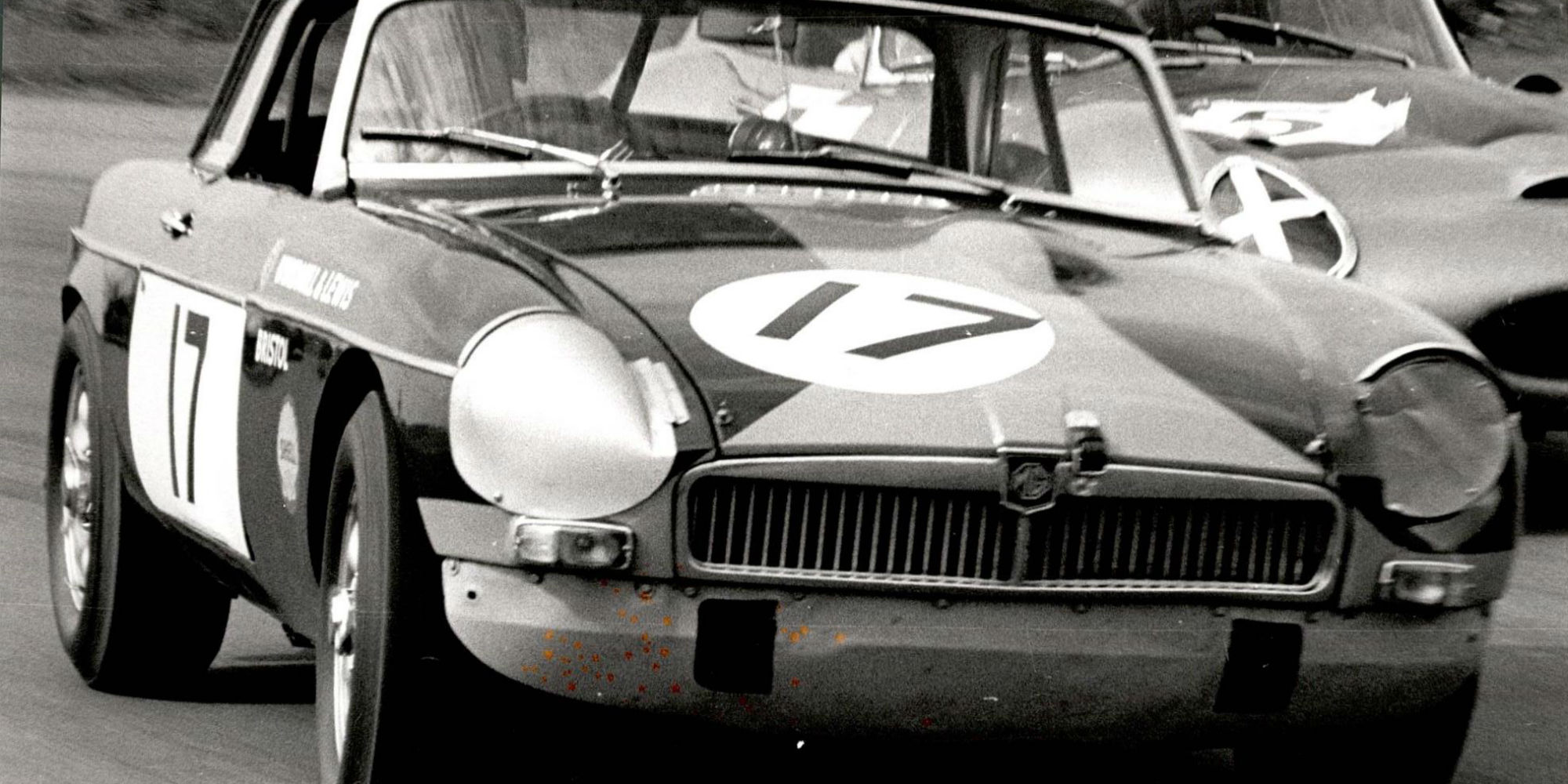 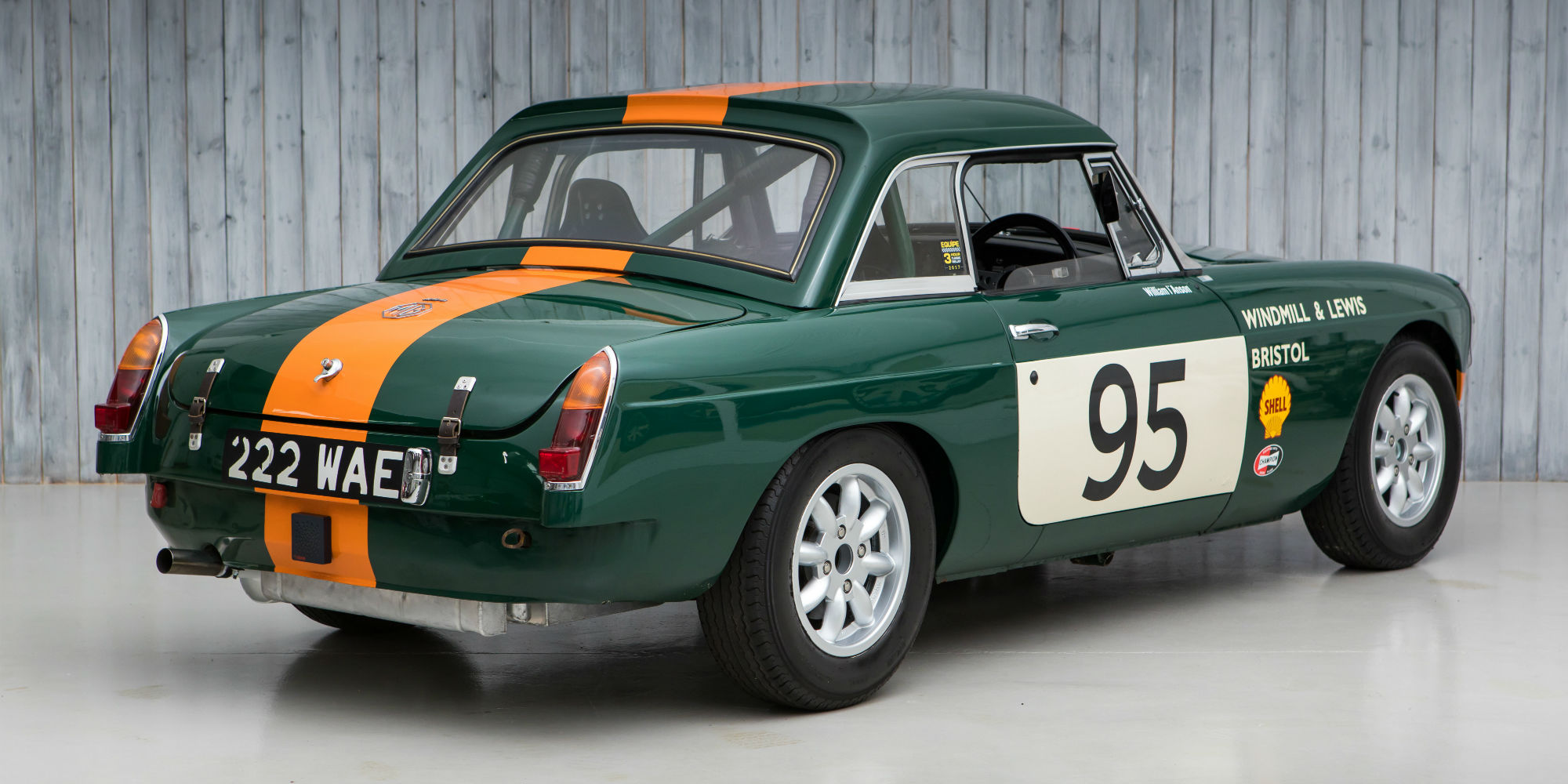 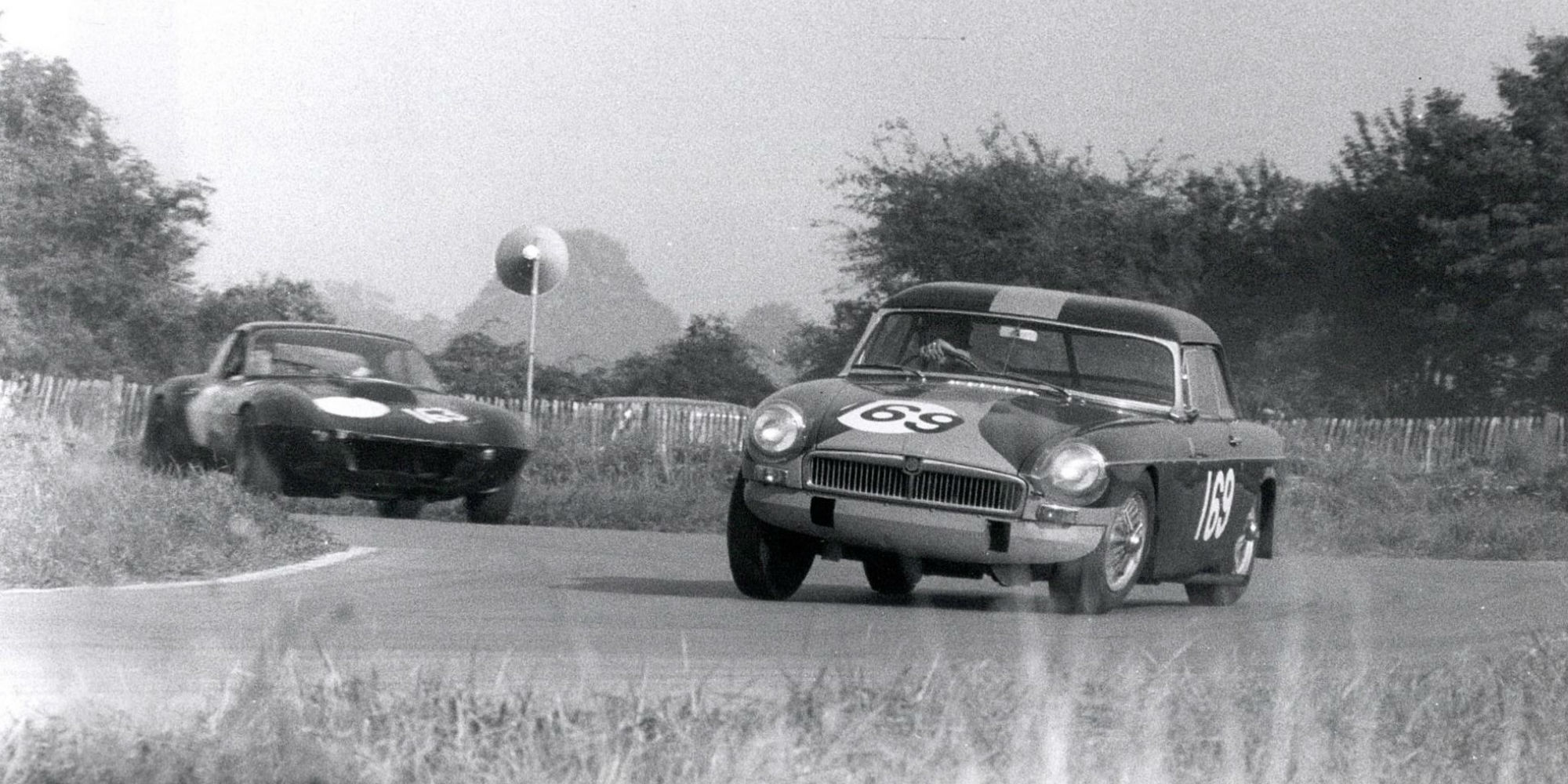 The MG B is one of the great success stories in British  motoring history. From its launch in 1962 as an affordable   convertible, the B sold a huge 387,259 units with the majority exported to the States over an 18-year production life. As with all great sports car of that idilic era the soon found its way to the race track where it proved very much in its element.

MG Bs were raced in many disciplines to get as much exposure and marketing potential as possible for the popular model. Racing in numerous world championship events both in Europe and America, in particular at Sebring and at Le Mans 1963, 1964 and 1965; taking the class win in 1963. As well as running at an international level the trusty B was a regular sight at club events in the 1960s and on into the birth of Modsports in the 1970s. Not restricted to just the track the B was equally at home in rallying and hill climbs.

This well known and loved example very much epitomises and, more importantly, contributed towards everything that cemented the MG B’s place in motoring history. Possibly to most significant MG B race car that was not directly used by the works department. ‘222 WAE’ was built to works specification and campaigned relentlessly from 1964 to 1970 by Roy Ashford on behalf of the Bristol, MG dealership Windmill & Lewis with great success.

222 WAE was purchased in 1963 by the Bristol MG dealership Windmill & Lewis, who had previously had some success in 1961 running a MG Midget and a MG A. Under the guidance of their talented workshop foreman, Roy Ashford, the car was built up to works specification over the winter on 1963-4. In addition to the to the standard aluminium bonnet, 222 WAE had an aluminium front wings, doors and boot lid. The engine was rebuilt to homologation specification running an 1840cc block and among many other changes the car ran on adjustable Armstrong lever arm shock absorbers on the rear, which the car still retains to this day.

During the period of 1964 to 1971, the pairing of 222 WAE and Roy Ashford were to prove to be one of the most prolific award winners for the marque in those early years. Remarkably from 1967 onwards the partnership nearly always picked up a top three placing. 222 WAE initially started off painted British Racing Green with a white hard top which went on to be painted black and then British Racing Green to match the rest of the car. It was one of the workshop apprentices who helped out at race meetings who suggested painting the car in its striking green and orange livery. In those days advertising was not allowed so the distinctive livery proved just as effective with the green and orange MG B becoming well know throughout the country. Driving mainly in the ‘Chevron, Freddie Dixon STP championship’ he also ran in several hillclimbs each year to keep the Windmill & Lewis name in front of the buying public.

“Roy’s most memorable race was at Thruxton on 24 May 1970 when he finished second, splitting two AC Cobras. Shaun Jackson won in his 7.4-litre model with a race time of 12min, 42.2 seconds, Roy’s time was 12min, 44.0 seconds, less than two seconds behind him with Ian Richardson, whose car had a 5.4-litre engine trailing a further three seconds third, having completed the ten laps in 12min, 47.0sec. This was an excellent achievement for a 2-litre MGB at Thruxton, which has always been regarded as a ‘power circuit.’ Motoring News described it as ‘The hairiest Motorsport race for many a frantic day!’” MGB The Racing Story by John Baggott.

Lex took over Windmill & Lewis in September 1971 and decided not to continue campaigning the car thus closing the racing program. The Manging Director of Windmill and Lewis, Peter Robinson, offered to sell the car to Roy but he declined and at his suggestion the car was sold to his friend Terry Osbourne, which it was in November 1971.

Terry had the car painted Fiat Mediterranean Blue and latterly in the green and purple of Bristol based Sonnet Kitchens. He raced the car frequently from 1972 making his race debut in the Chevron Oils Championship at Mallory in March of that year. Initially Terry invited Roy to share the driving of 222 WAE with him but after Terry failed to get a drive due to Roy having problems in his race, Roy decided to take a step back and leave his friend to drive.

Terry raced the car through the 1970s and 80s mainly in the Modsports races and competed in the MGCC Wiscombe Hill Climb every year. He joined the BCV8 Championship in its inaugural year of 1977 and he went on to win the championship in 1978 and 79. He also set records at Castle Combe (July ’85) and Wiscombe Hill climb (September ’90). Richard Longman did the engine work during this period and Roy Ashford continued to maintain the rest of the car with David Franklin.

Having retired from racing Terry sold the car to the well known MG enthusiast and racer Colin Pearcy, who had the car returned to its original ‘Windmill & Lewis’ specification and colours.

He then raced the car at numerous classic events including VSCC races, the Pomeroy Trophy, MG Car Club meetings, classic Jaguar meetings and the Goodwood Revival in 2001 and 2004. Pre-War Aston Martin specialist Rob Davies purchased the from Colin in 2008 and enjoyed only light use with the car.

222 WAE was purchased by the current owner in 2016 having seen how competitive MG Bs were on the Tour Auto that year and thus wanting an example with strong period history. 222 WAE is just that. Upon purchasing the car it was sent to MG Motorsport where the engine was removed and replaced with a rebuilt FIA specification engine. The gearbox was rebuilt as was the back axle. Two new lightweight Tillet Seats were fitted and the car was entered into the 2017 Goodwood Members Meeting.

Following the meeting the decision was taken for further restoration to bring the 222 WAE to the level it deserves. The work undertaken in house by Alec Griffiths at Bespoke Competition Storage Ltd. The engine was removed and sent back to MG Motorsport to be rebuilt with a new cylinder head. The suspension and front sub frame were all rebuilt  and refinished, the Armstong adjustable shock absorbers were overhauled, new front discs were fitted and the car was treated to a thorough race preparation.

New FIA HTP papers were granted and since then the car has only had one test at Donington, before heading to the  Goodwood Revival to compete in this year’s Fordwater Trophy. 222 WAE is offered for sale fresh from Goodwood and offeres a rare opportunity to acquire one of a very few MG B with this pedigree of period racing history. Accompanied by its current V5, original buff log book, fresh FIA Historic Technical Passport, British Motor Industry Heritage Trust certificate, RAC competition log book and an extensive history file. The car is currently road registered and comes with six spare Minilight wheels, four of which are clad in Avon ZZ tyres making it ideal for road and rally use. A recent visit from Terry Osbourne also reunited the car with an original Longman cylinder head.

Famously well balanced MG Bs are great fun to drive on both road and track, this fine example does not disappoint on either. What is apparent when you arrive with 222 WAE is how fondly the car has been remembered over the years in racing circles. That is great testament to the car and all of the people that have been involved with it over the years. An ideal entry for the Tour Auto, Le Mans Classic, Goodwood, Gentleman Drivers, GTSCC Equipe GTS and so much more. There is arguably no better value way to competitively racing in a car with such period history and eligible for so much as 222 WAE.