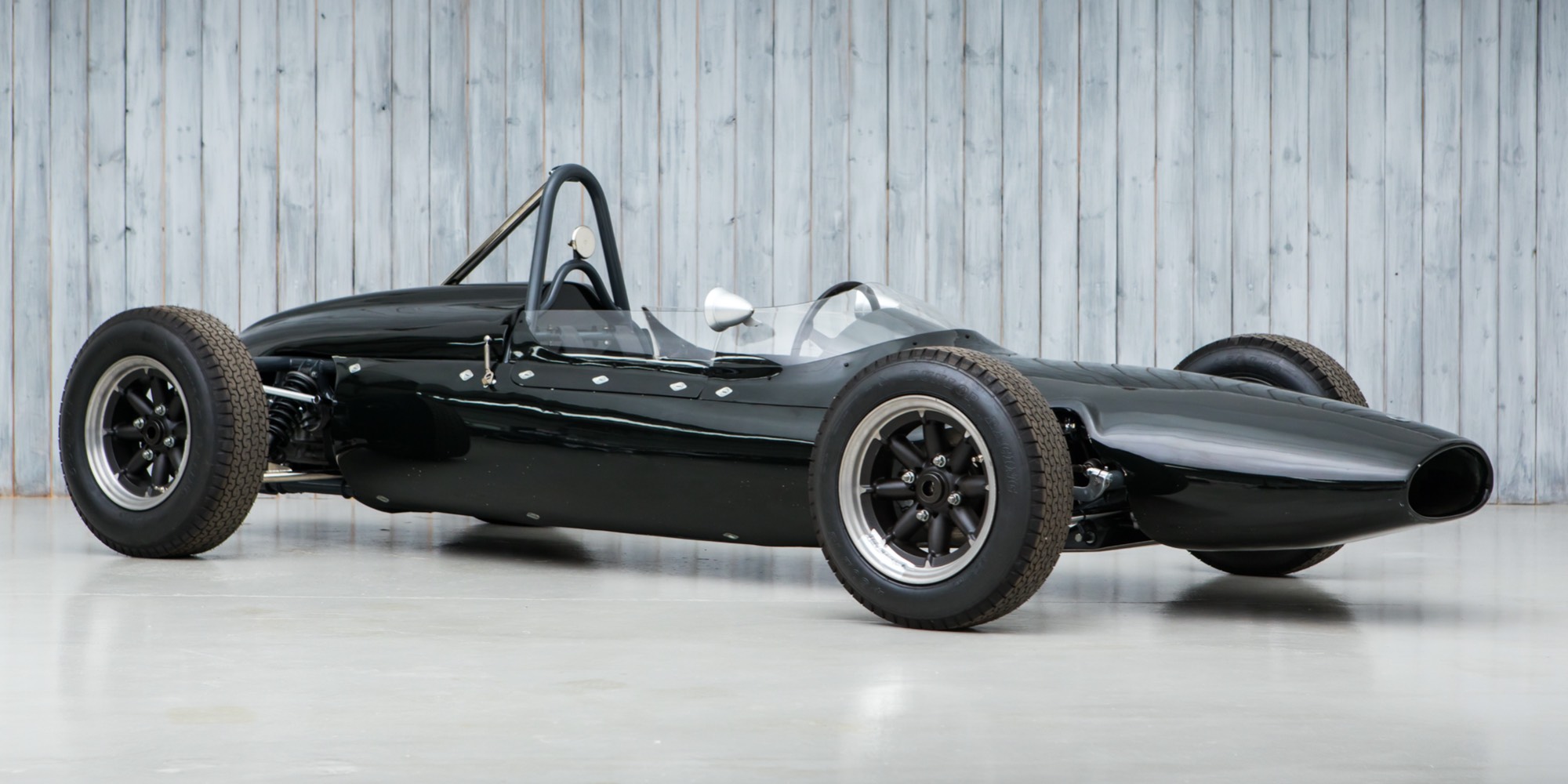 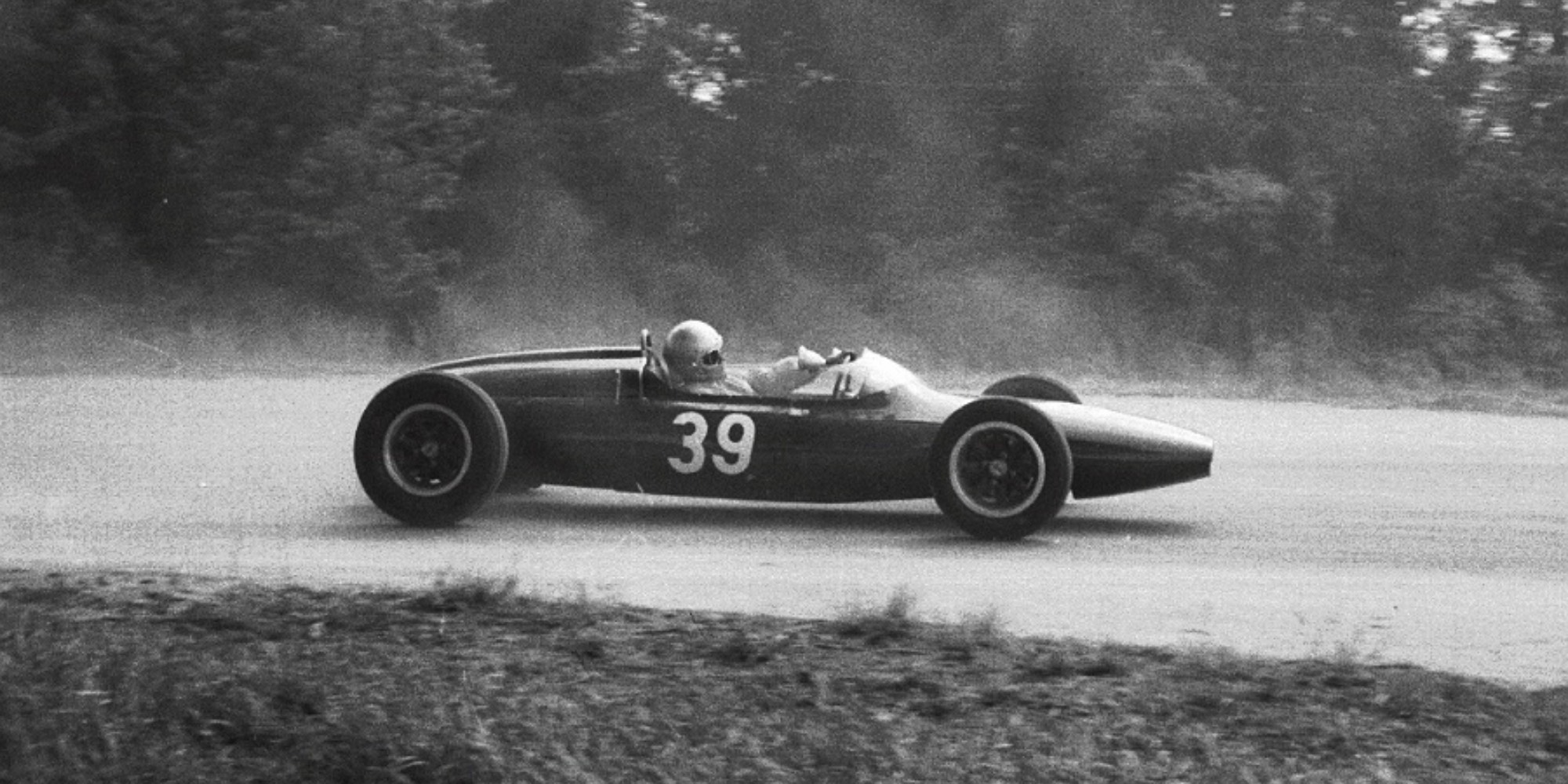 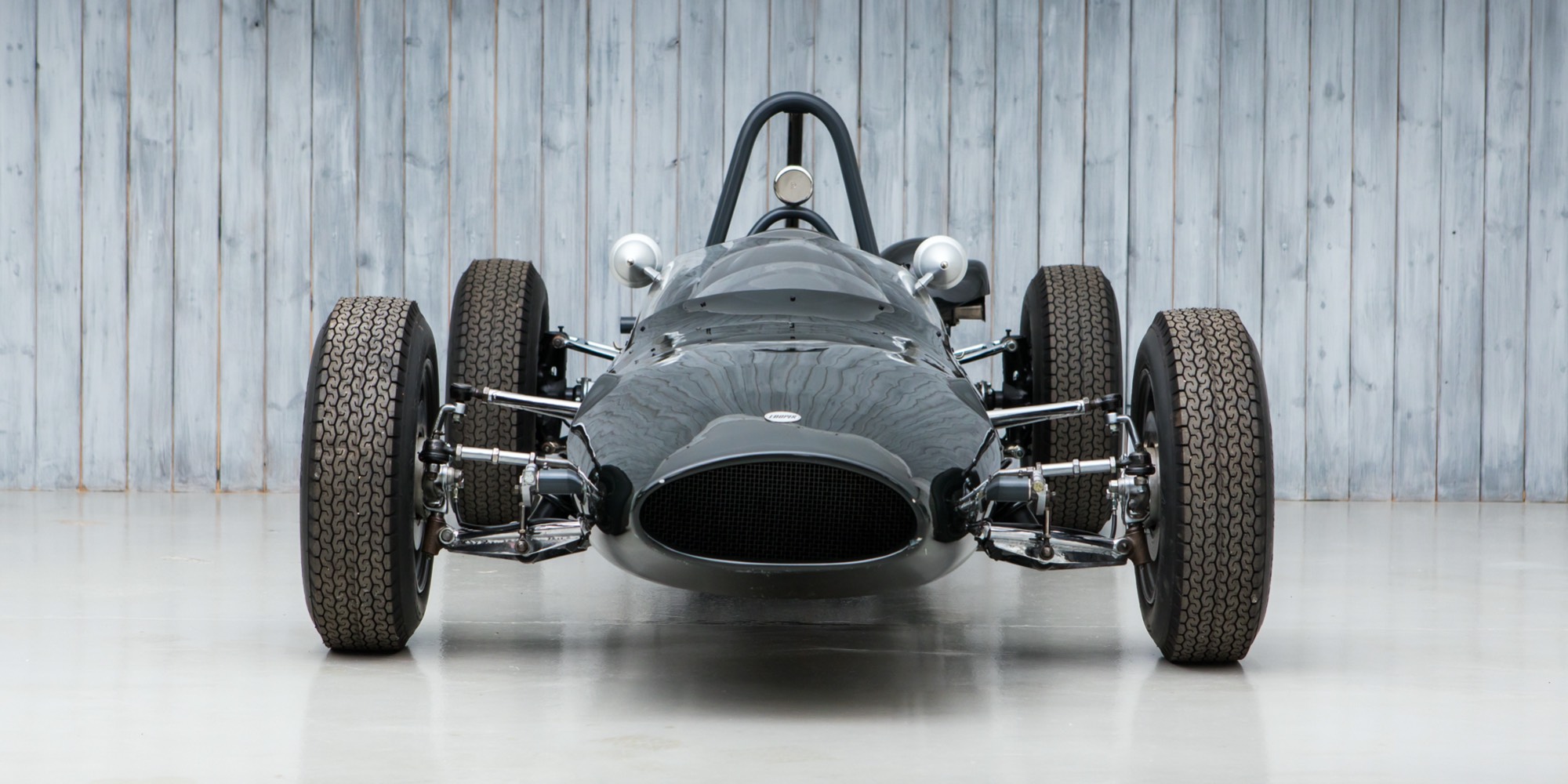 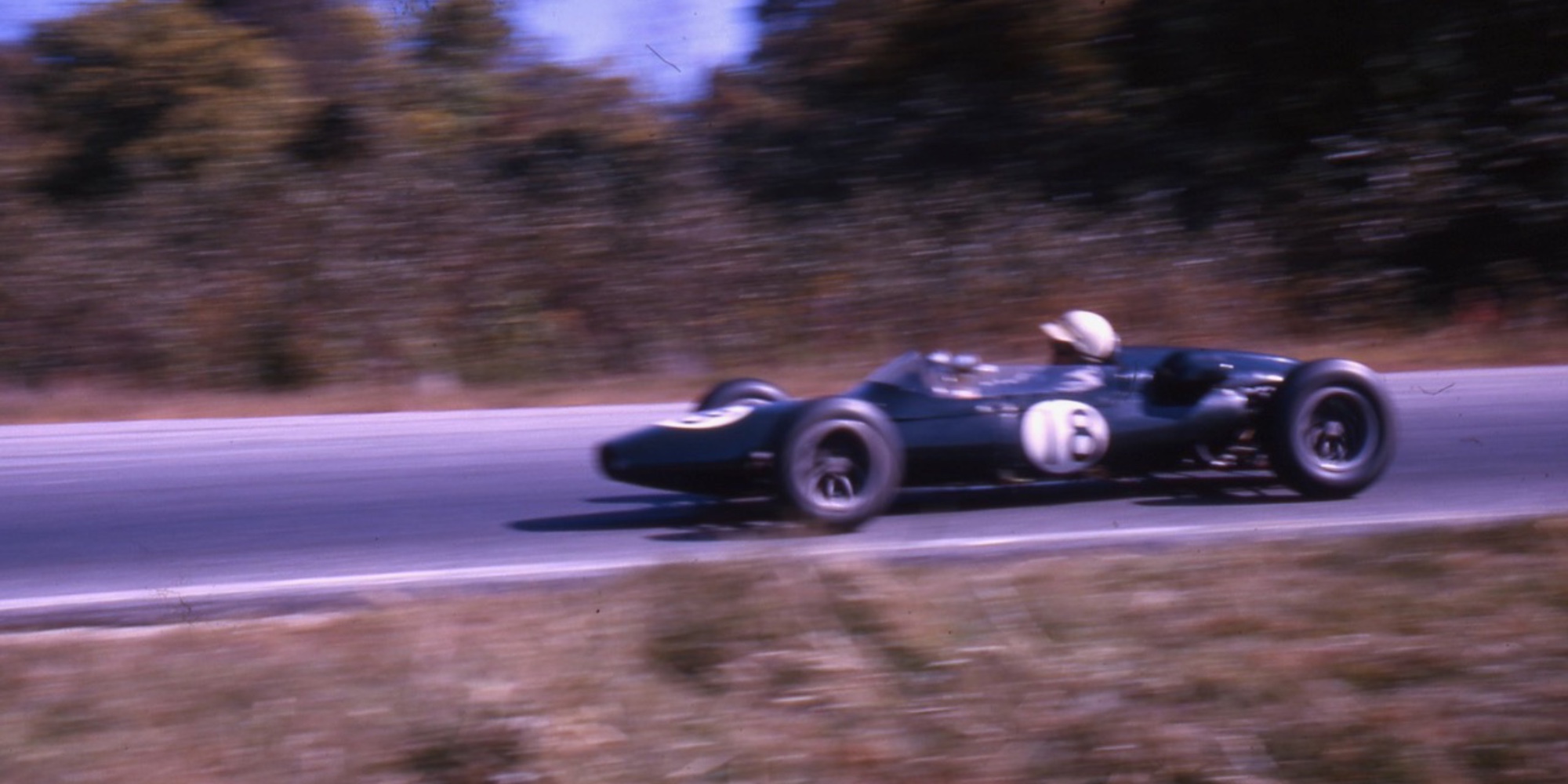 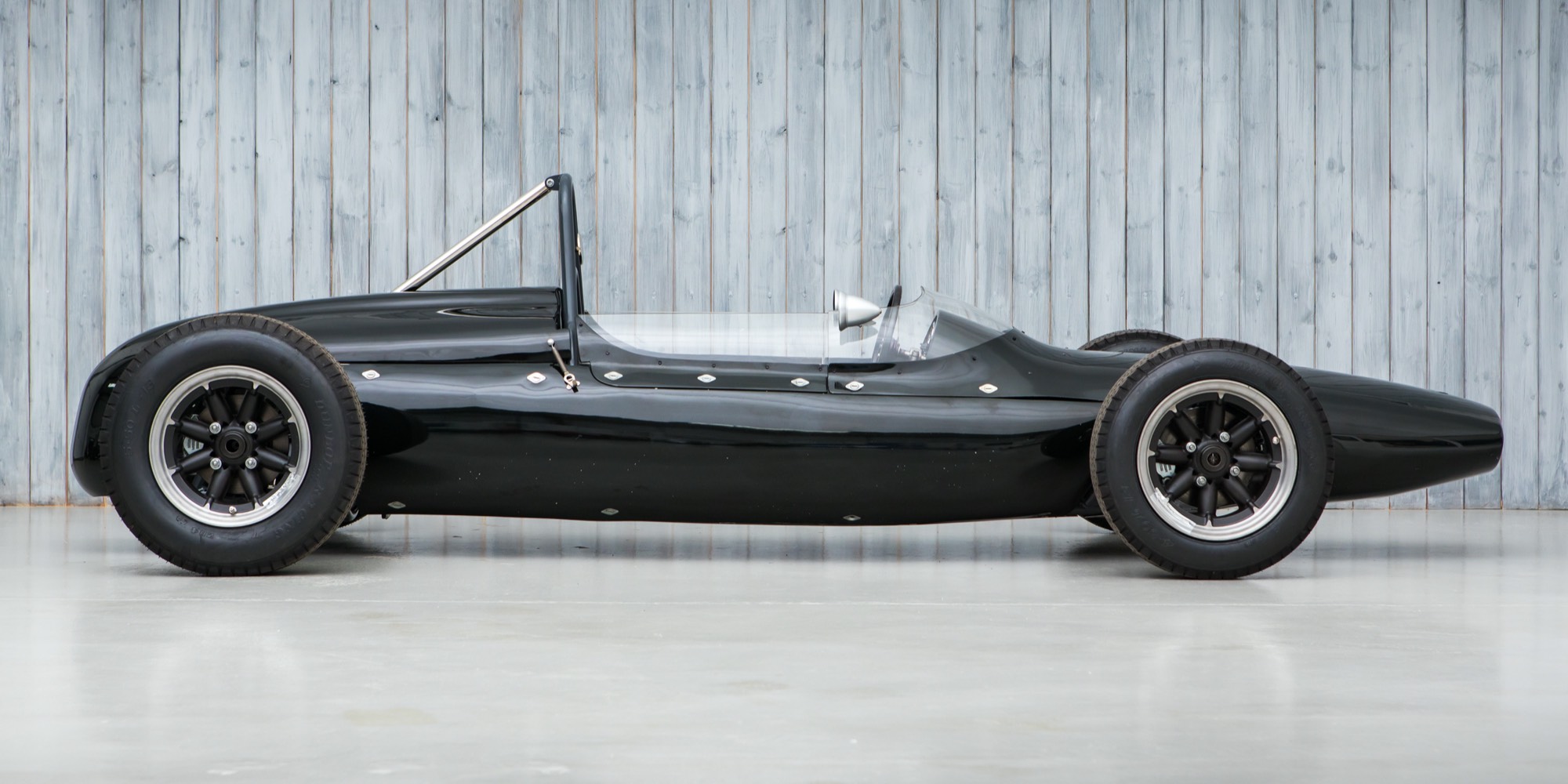 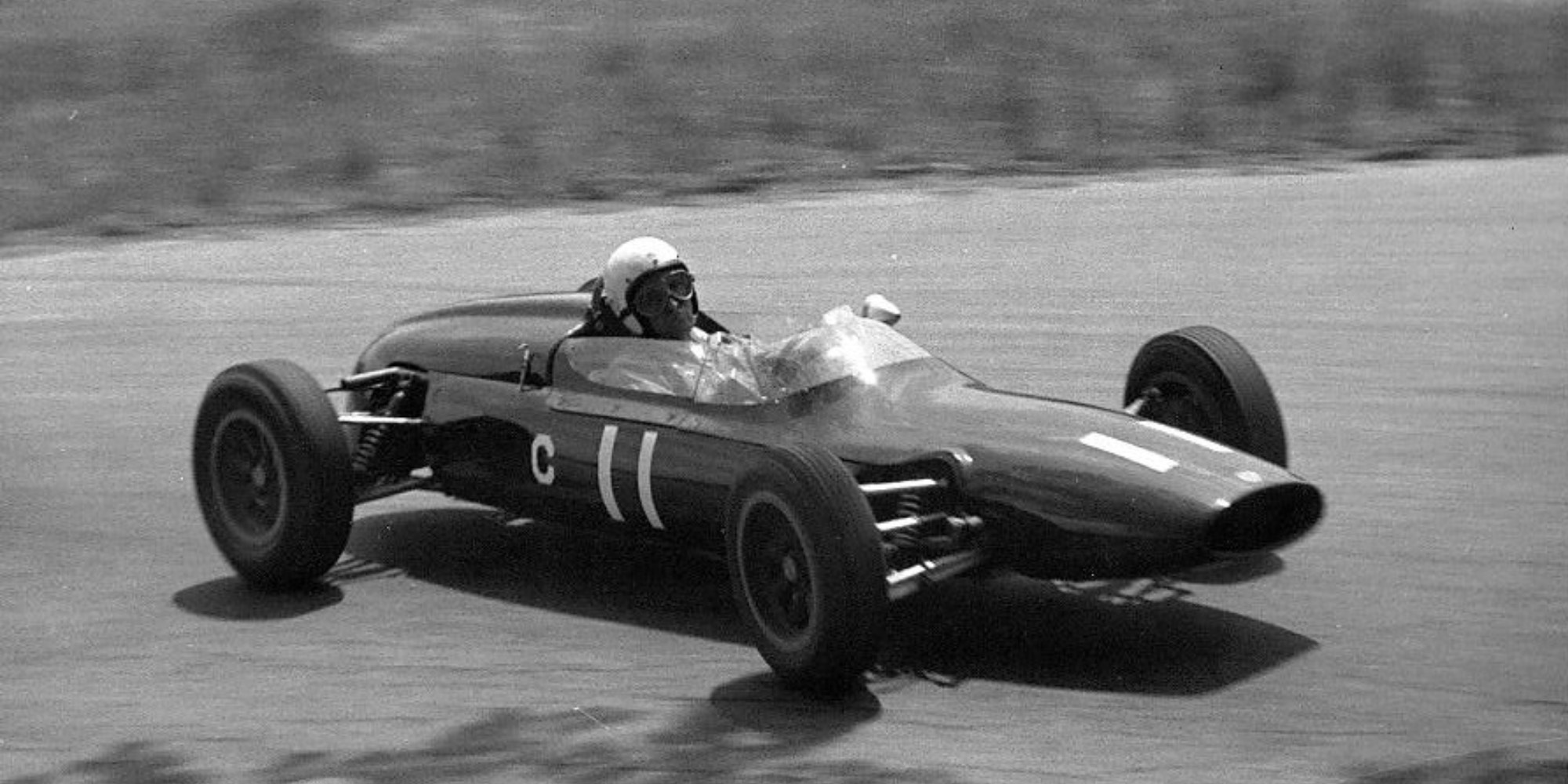 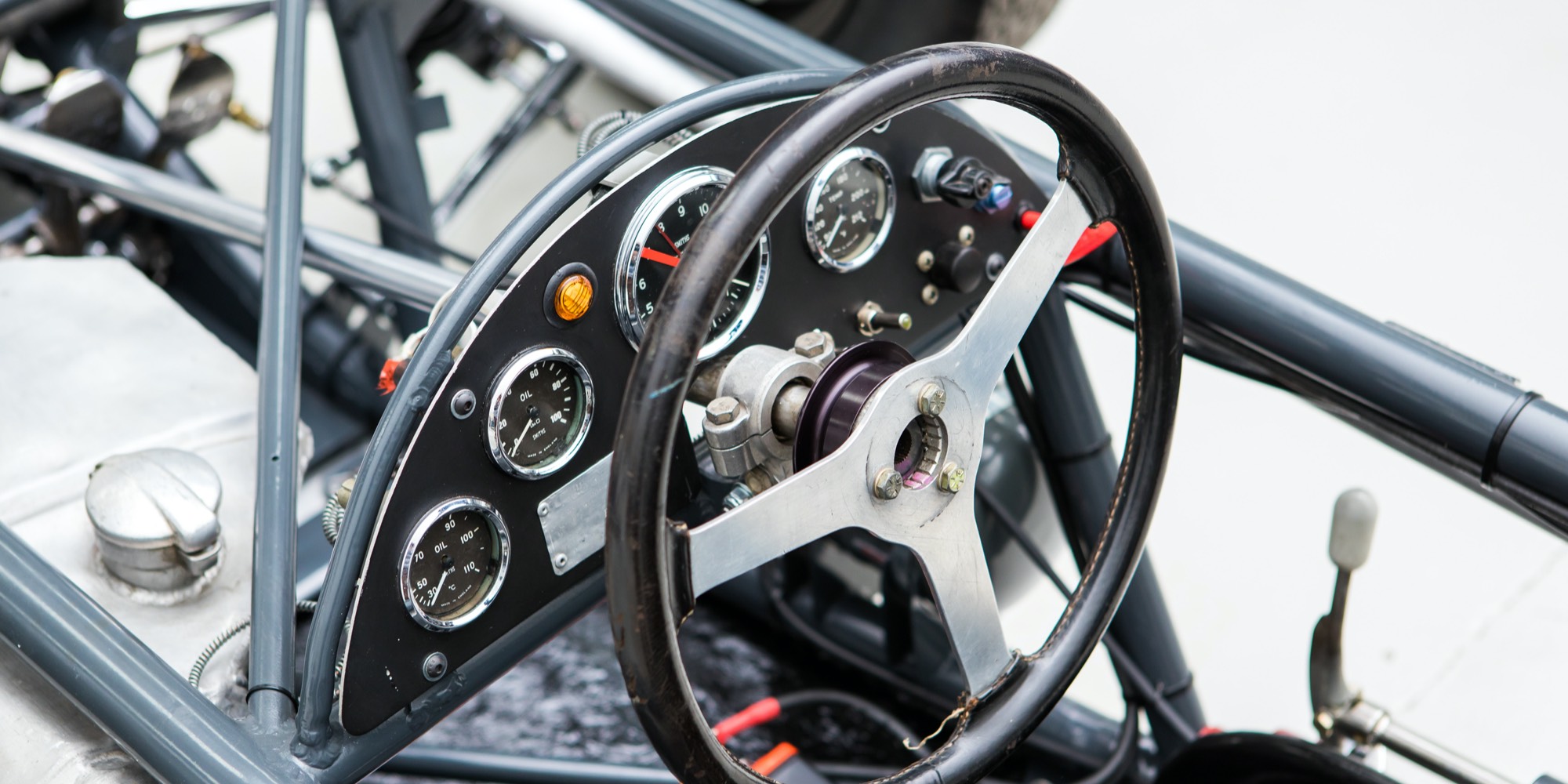 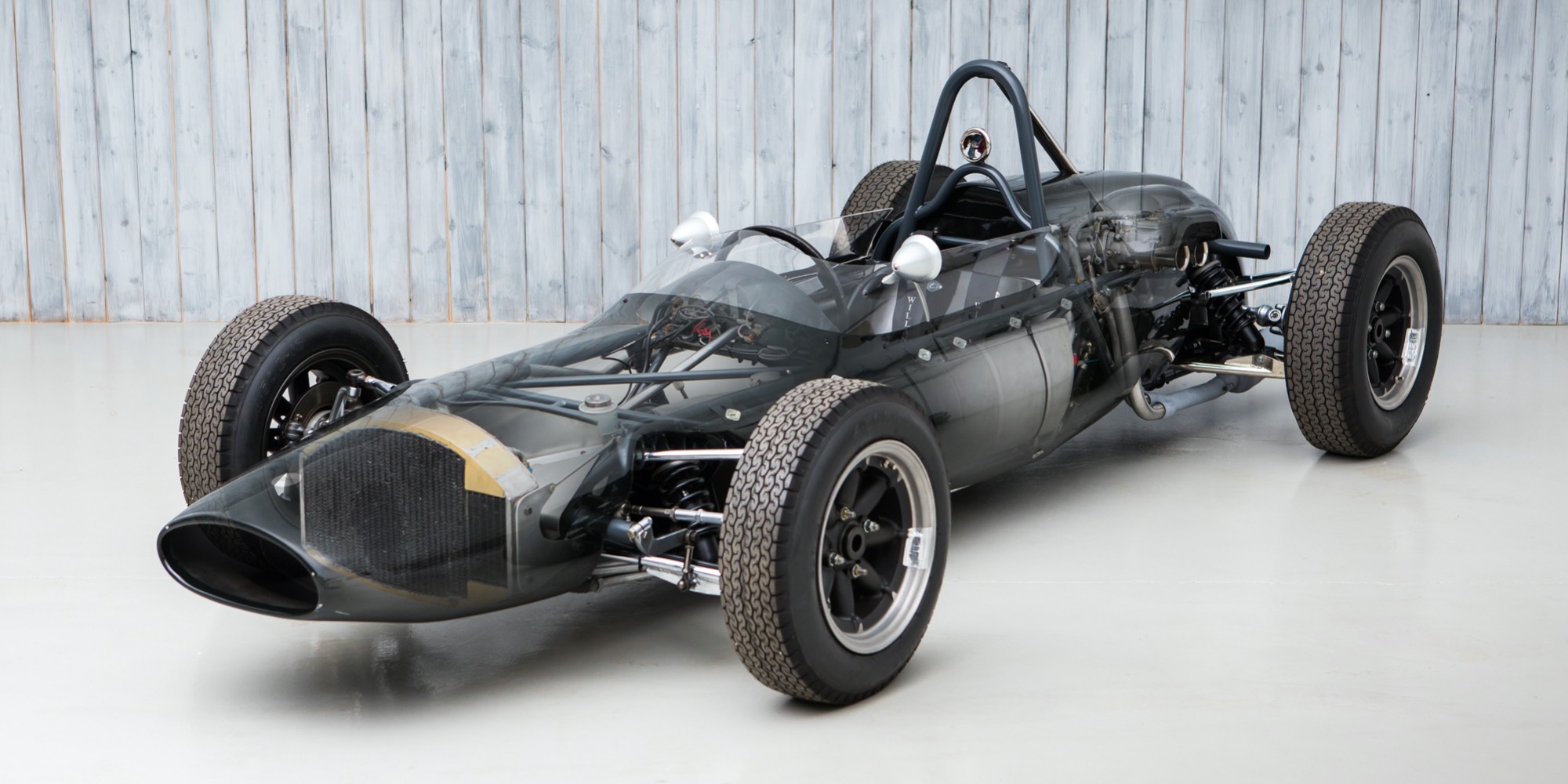 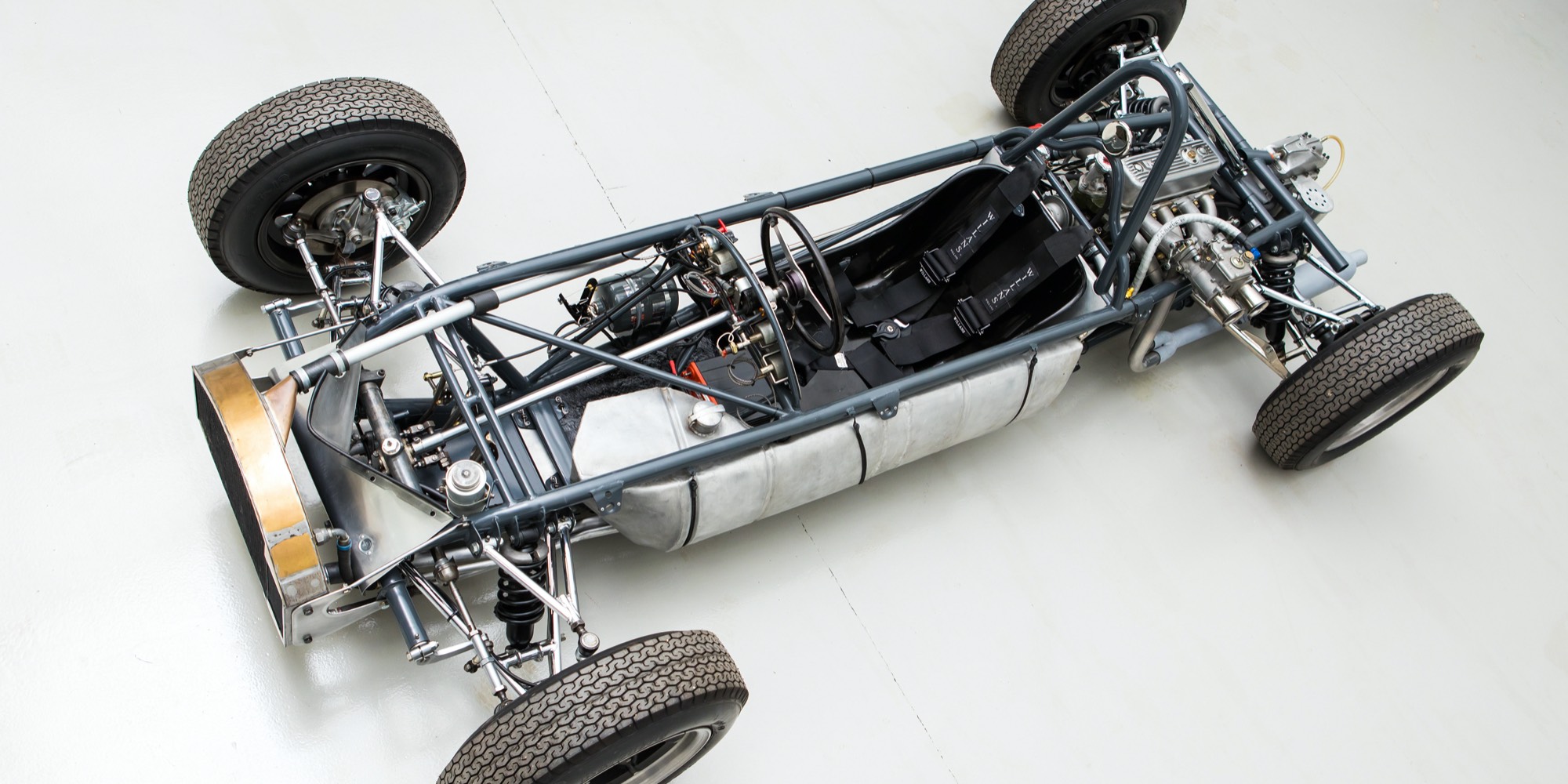 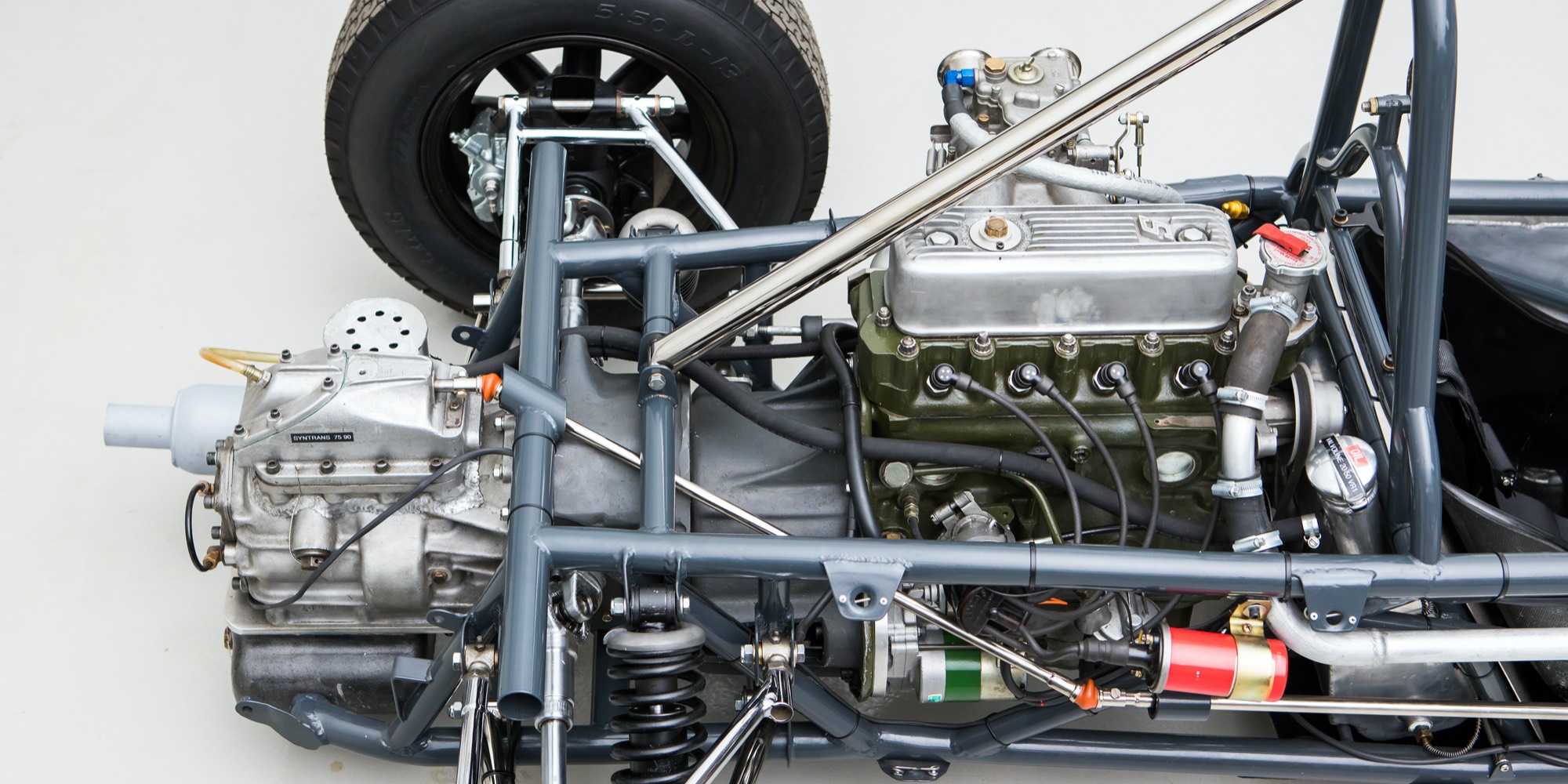 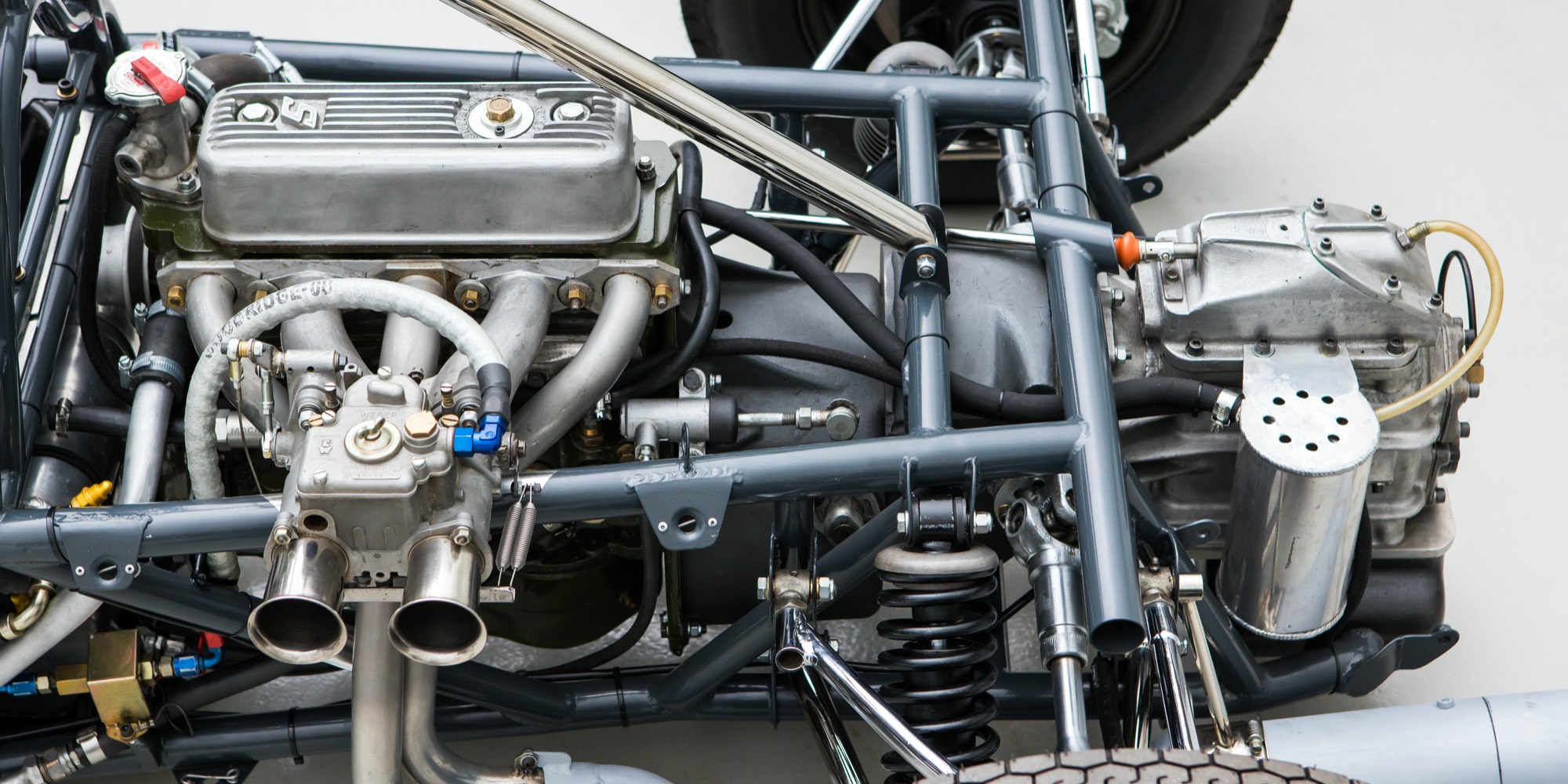 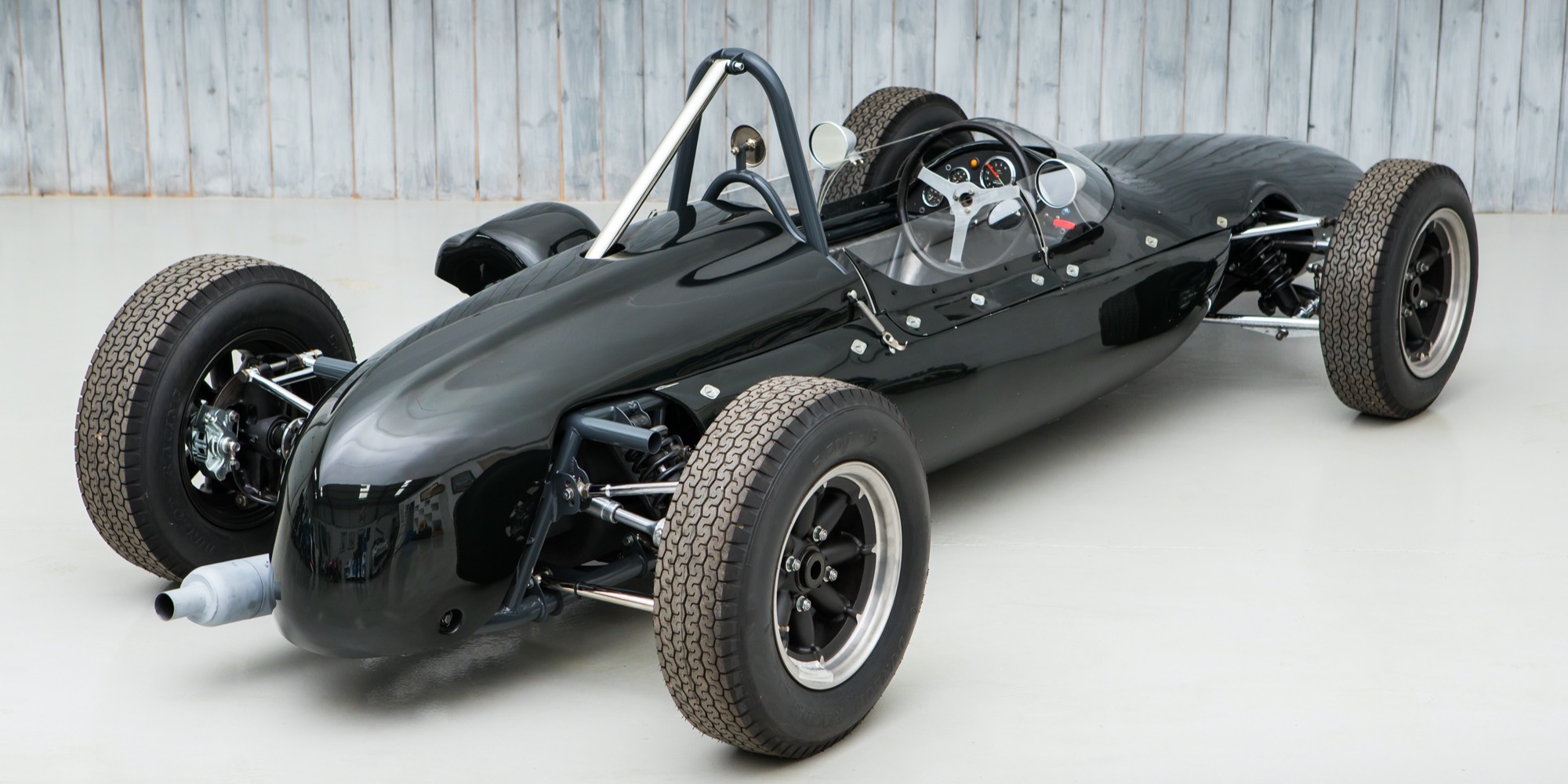 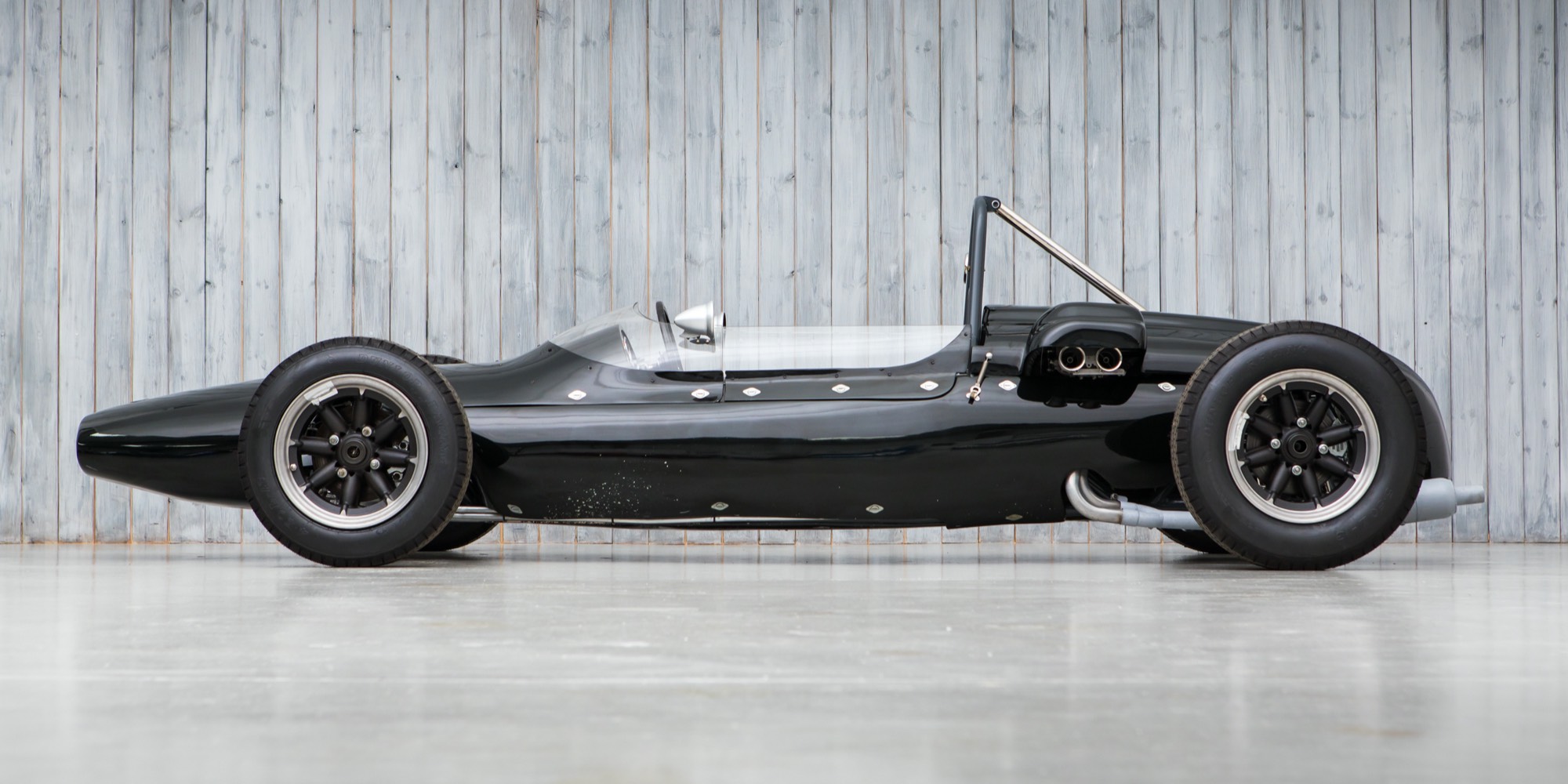 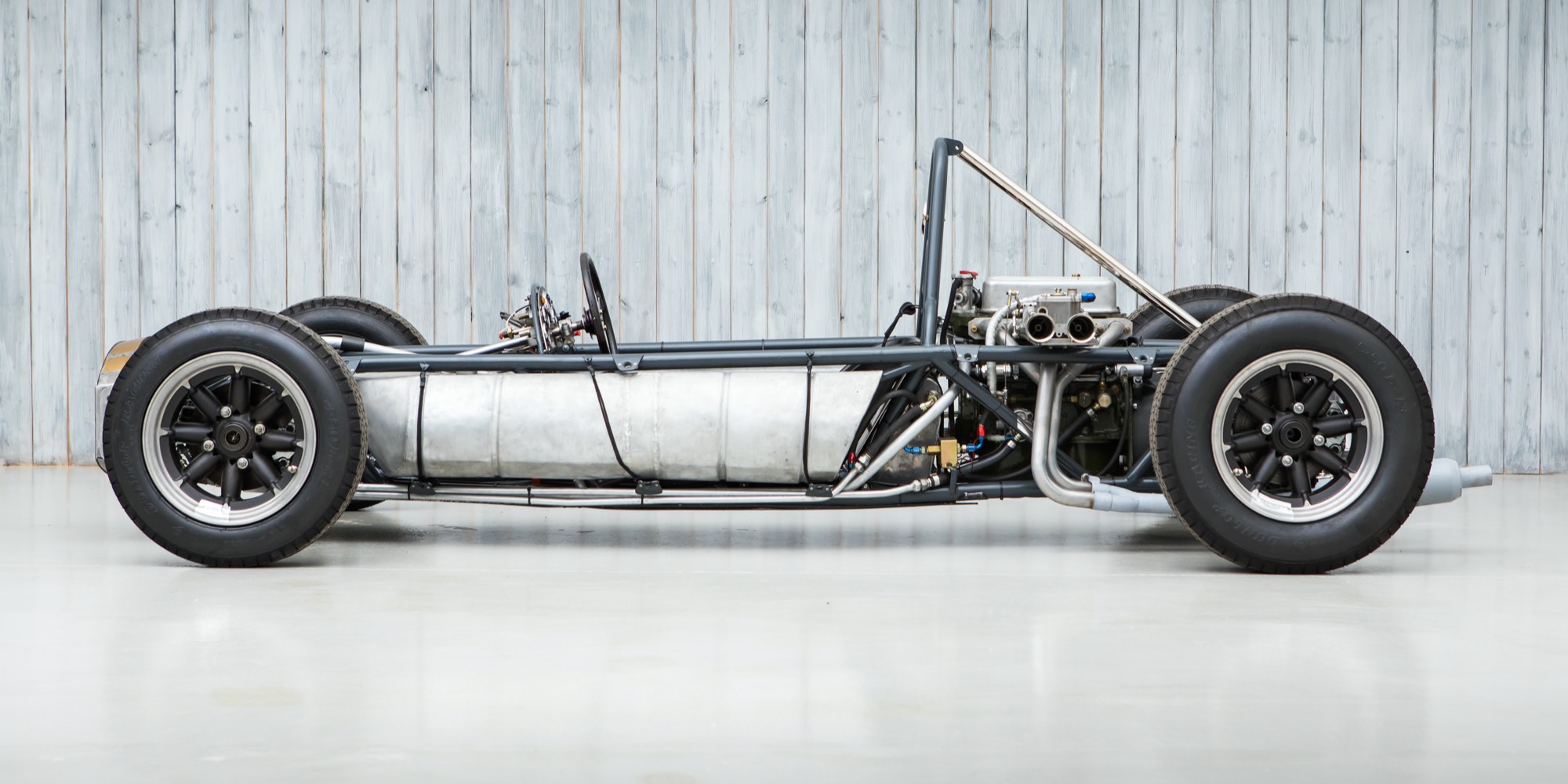 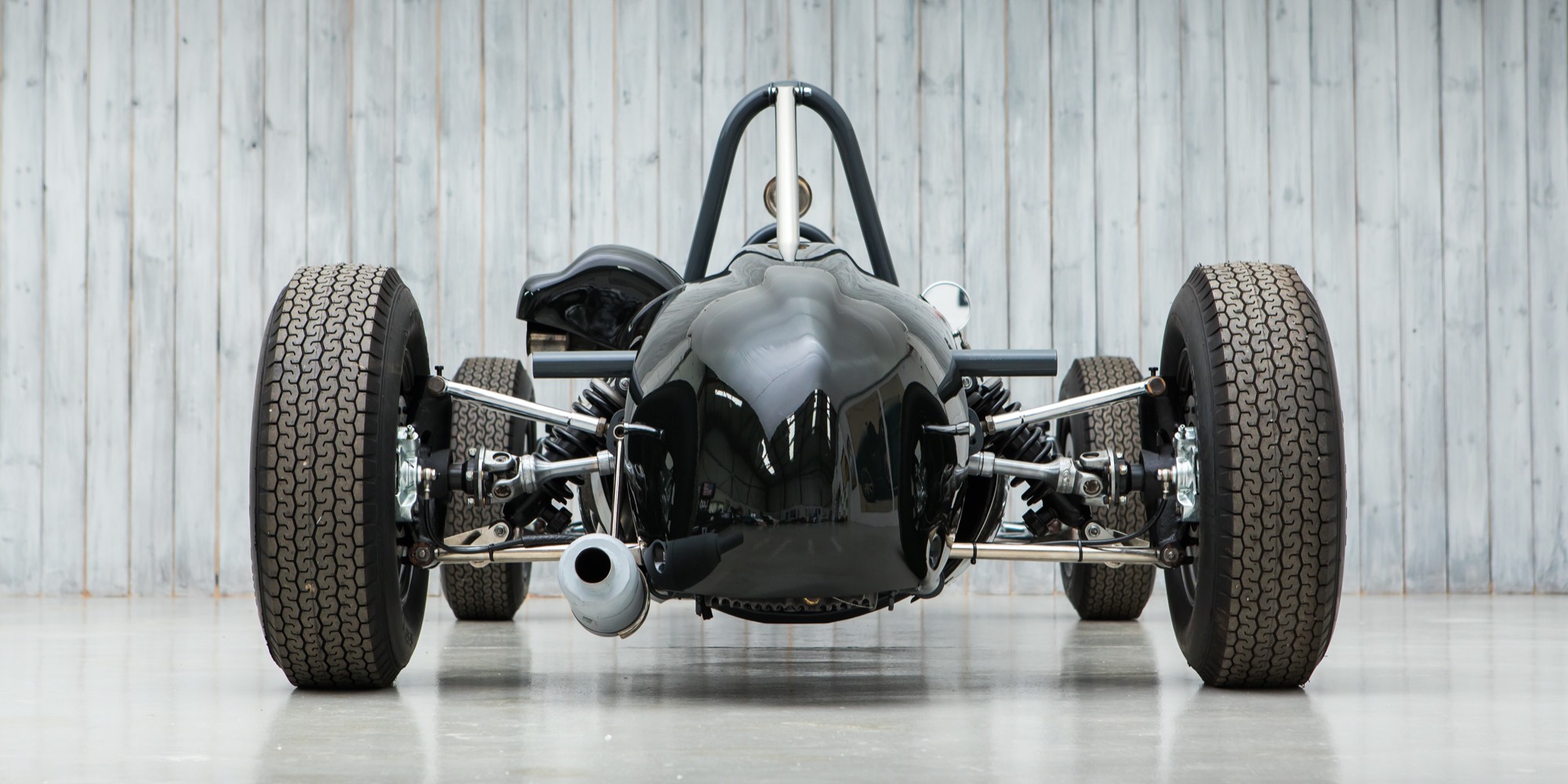 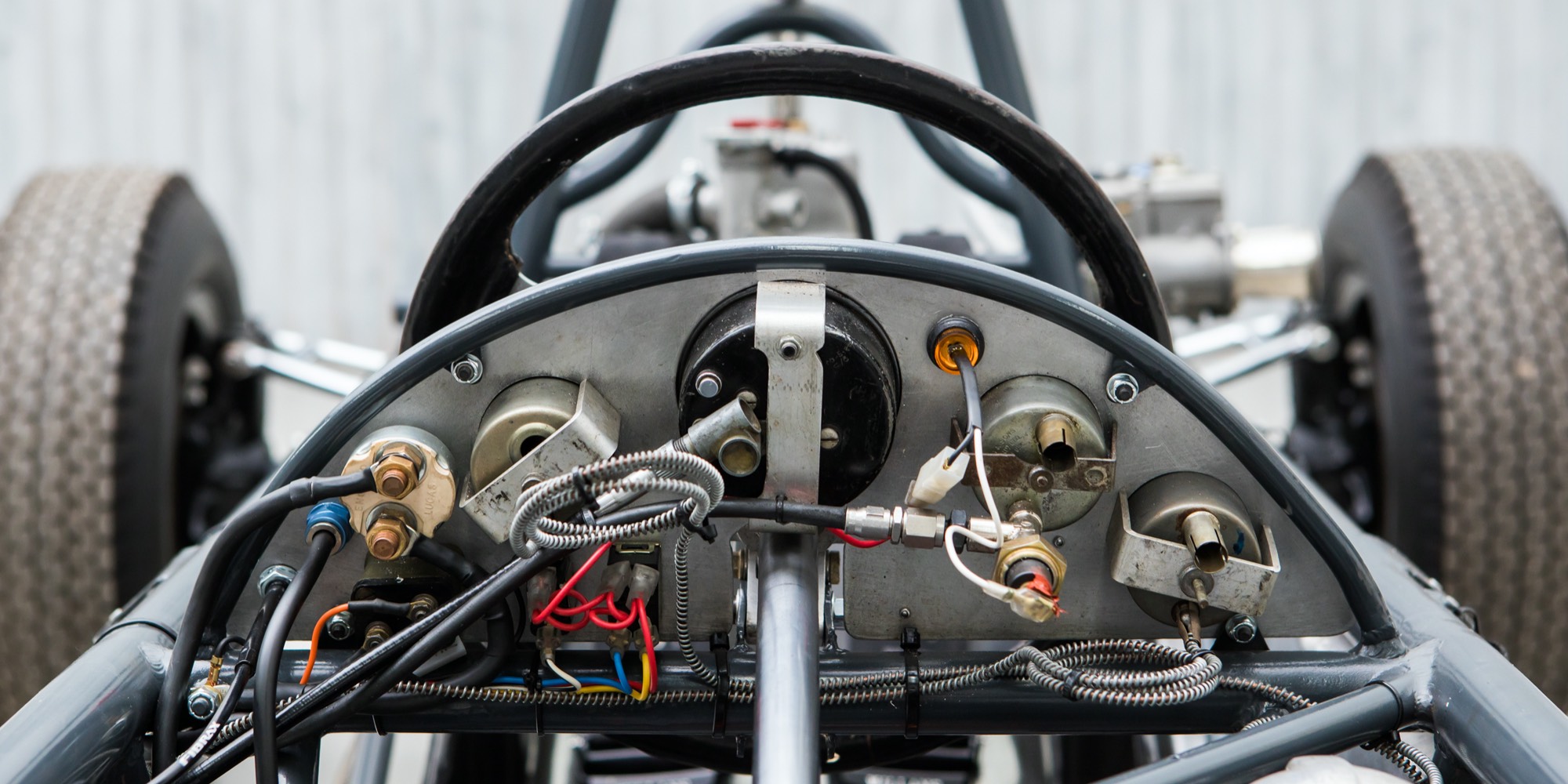 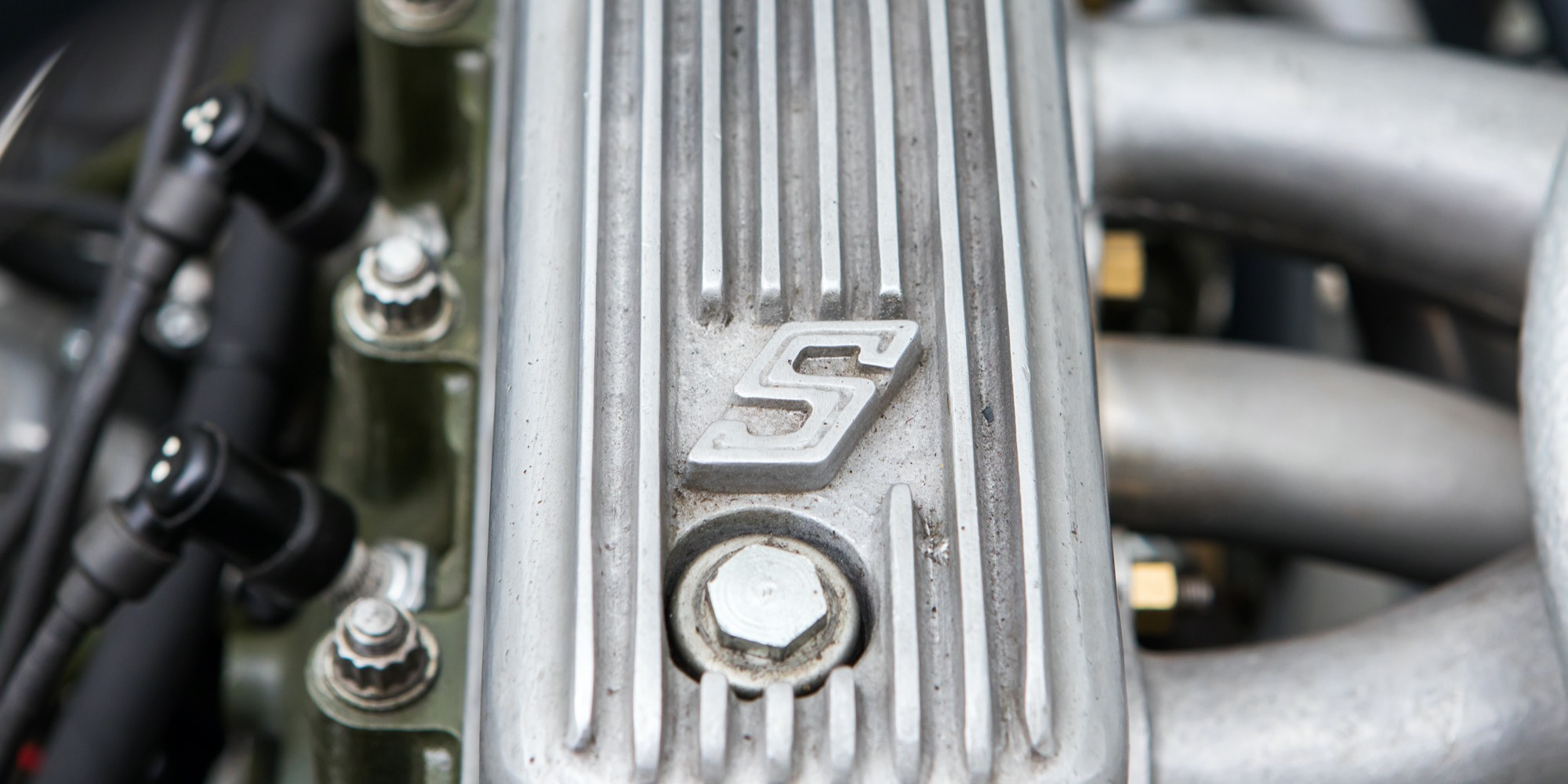 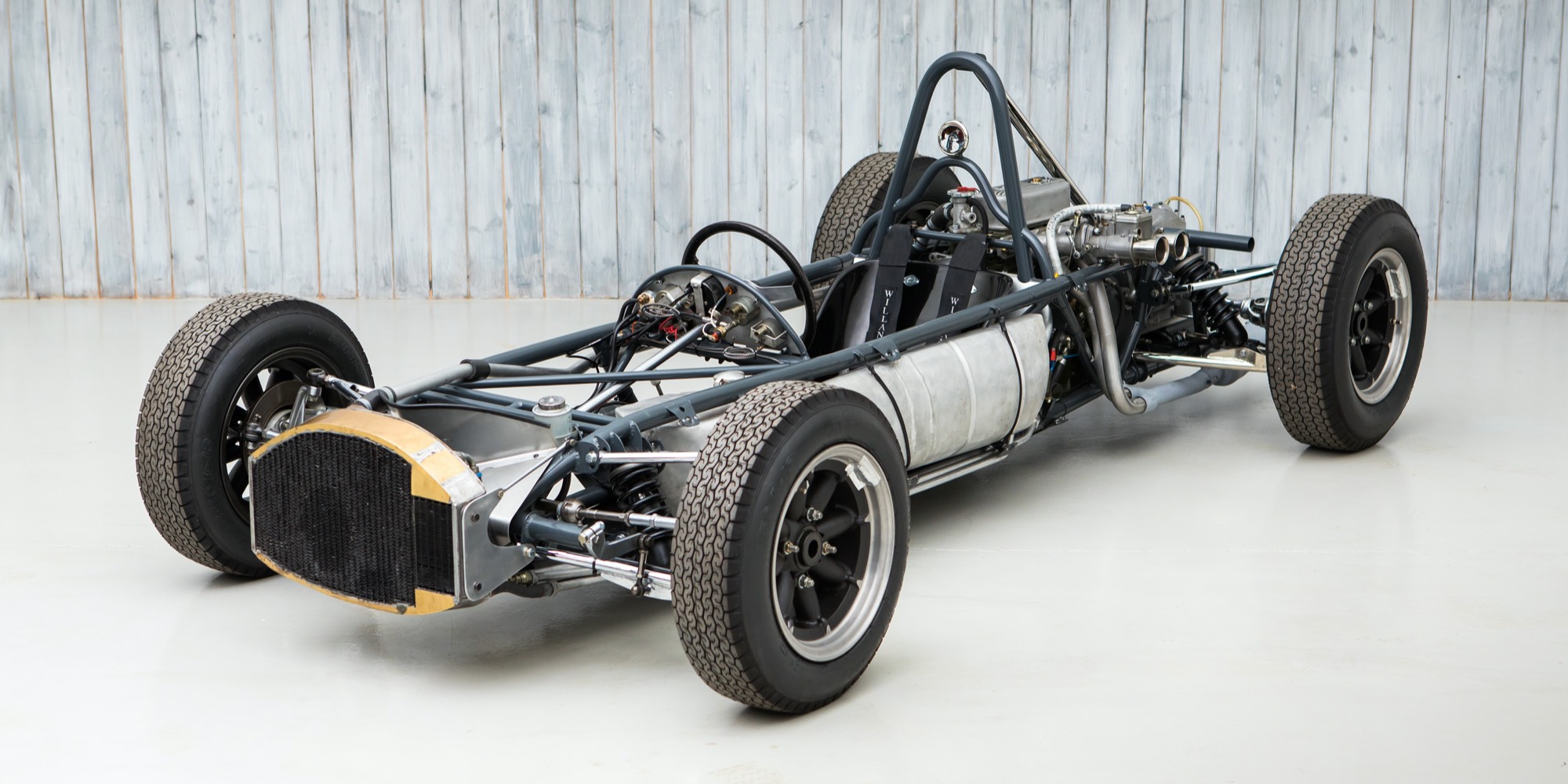 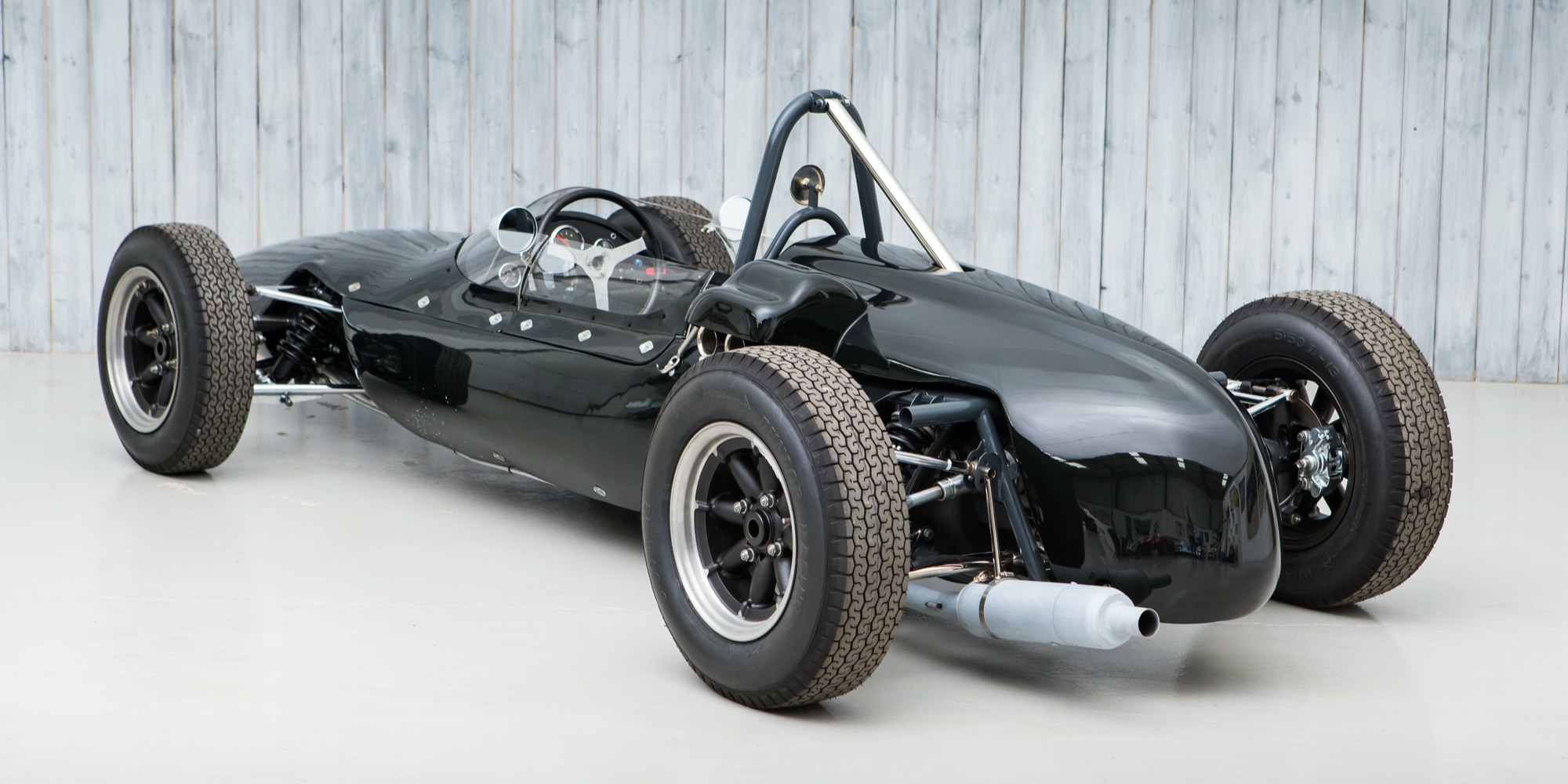 Formula Junior is one of the most competitive, active and well attended areas of historic motorsport worldwide, and was originally the brainchild of well known Italian racer Count ‘Johnny’ Lurani. From 1958 to 1963 Formula Junior replaced the motorcycle engined 500cc F3 cars as the stepping stone into Formula 1. Designed as a class for essentially mini Grand Prix chassis running 1,000cc or 1,100cc production engines and gearbox; in its relatively short life time Formula Junior spanned a period that saw some of the most significant changes in motorsport design to this day and as such very quickly went from front to rear engine designs.

Formula Junior was a truly international series with 100s of cars regularly competing across the globe. Names such as Jim Clark, John Surtees, Jochen Rindt, Jo Schlesser and Lorenzo Bandini to name a few, are just some of the great Grand Prix drivers to have honed their craft in the cut and thrust world of Formula Junior.

Having begun constructing cars for the 500cc Formula 3 series with their forward thinking rear-engined design, the Cooper Car Company naturally followed the progression to Formula Junior. Debuting in the popular entry level class in 1960 with the T52. Based on the very successful T51 Formula 1 and 2 chassis design, with the gearbox, rear spring and uprights carried over, the T52 proved a competitive car. In the hands of Henry Taylor a T52 won at the Monaco Grand Prix, with further wins at Silverstone and Albi.

For 1961, the Mk2 Formula Junior model the T56 featured the coil sprung rear suspension and lowline body sported by the Formula 1 T53 but retained the drum brakes of the T52. With 994cc BMC XSP power, Walt Hansgen took victory at Riverside, California in the T56’s maiden race. More victories followed in the hands of Denny Hulme, Tony Maggs and John Love.

The T59, Mk3 Formula Junior, model debuted in 1962 with a larger 1100cc, dry sump version of BMC’s XSP engine  feeding a five speed Jack Knight modified ERSA gearbox, and braking was improved with Lockheed discs fitted all round. Suspension track was widened by 2.5” and on it were mounted magnesium 13” wheels. The low line body of the T56 was further improved for the new T59 as 2” lower, and it was also slimmer by some 5”. The revisions were effective, and the T59 proved to be two seconds per lap faster than the T56 in testing at Silverstone.

It was Richard Attwood who took the first win for a T59, doing so at Silverstone for the Midland Racing Partnership. Many further wins followed for the model, with drivers such as Denny Hulme helping the total. Success was also found in the USA where Tim Mayer, Teddy Mayer, Peter Revson, Walt Hansgen and Roger Penske all campaigned T59s.

Another car which was destined for the USA is this, chassis  FJ/24/62, ordered new by noted racer Suzy Dietrich as her own car, for her and husband Chuck, the Elva works driver, to race from time to time. The order was instructed by covering letter from local Cooper agent Dr. Frank Falkner on the 25th June 1962. The new T59 was to be completed to latest specifications with five speed Cooper gearbox, disc brakes and 1100cc BMC engine, number BMC-XSP-1854-20, finished British Racing Green in colour. Suzy had requested a light green stripe on the body, but with her first outing due on the 18th August, there wasn’t time for it to be added. She later remembered how the T59 looked sinister in the dark green colour.

For the sum of £1650.10, the order was completed and FJ/24/62 was flown from London Airport to Cleveland Hopkins Airport, Ohio, clearing customs on the 14th August 1962 in time for its first race that weekend. The first time Suzy had seen the Cooper Formula Juniors race was at Cumberland, Maryland in May that year, and it was her friends Peter Revson and Tim Mayer that suggested that a T59 should be the car that she buy.

Through the latter part of 1962, the Dietrichs travelled far with FJ/24/62 and Chuck’s works Elva 300 Formula Junior. Having been as far north as Mosport Park near Toronto, Canada for the Grand Prix support race, they made their way down to the southern island of Puerto Rico in November ’62.

The Dietrichs made the trip to compete at the one-off Puerto Rican Grand Prix meeting, which was also the opening race for the new circuit. The couple competed in the supporting race, which was attended by friends and fellow T59 racers Peter Revson, Tim Mayer, along with his brother Teddie and mechanic Tyler Alexander. Suzy received considerable publicity on the Puerto Rico trip as the only female driver present in the race started by Juan Manuel Fangio.

The travels continued in 1963, with the season getting under way at Sebring, Florida in March where Chuck drove to second place. They competed at many places through the year including Danville, the circuit which is now known as Virginia International Raceway. Suzy found Danville to be very fast, dangerous, and she was without previous experience there. In March, Chuck drove the T59 to victory in the President’s Cup SCCA Formula Junior race at  Marlboro Motor Raceway and then again in May at Cumberland, Maryland. At Dunkirk, New York, Suzy also took a win in a preliminary race.

During the ’63 season, the T59 was upgraded to the new Cooper six speed gearbox, in place of the five speed Jack  Knight/ERSA version it was supplied with. In September that year, the Dietrichs went to race at Elkhart Lake in Wisconsin. There, Chuck opted to race the T59, while Suzy instead drove his Elva 300. The couple were head to head away from the start, and Suzy made her way past Chuck into second place, only to have a moment with Augie Pabst’s Stanguellini. Suzy couldn’t get the Elva restarted while Chuck went on to finish in the Cooper.

One of the last outings for the T59 came at Marlboro, Maryland in the spring of 1964. Chuck drove once more, and it was here that Reed Rollo became aware of the car. Subsequently, Chuck persuaded Suzy to sell the car, a deal was agreed and Rollo bought the T59. Rollo went on to own the T59 for six years, racing it with success, including taking victory at Mid-Ohio in a race where Chuck was also competing in his Elva.

In 1970, Rollo sold the T59 to Darryl Foster in Detroit, where it remained until 1976 when it was bought by Christopher Briston in Michigan. Briston had a collection of similar cars, and in 1981 sold the T59 to Professor Rob Kirkby in  Melbourne, Australia. In Prof. Kirkby’s ownership, a restoration of the T59 was embarked on, though not completed. Having had the engine and gearbox rebuilt, but with the car still disassembled, the T59 was sold to Steve Tate of Victoria, Australia in 2000 after Prof. Kirkby’s passing.

Tate stored the T59 for four years in the disassembled state, before selling it in 2004 to Kelvin Prior also of Victoria,  Australia. Prior set about completing the restoration over the following two years, with the car remaining in British Racing Green. In December 2006, Prior sold the T59 to James Sharp in Tulsa, Oklahoma. The car returned to the USA once more, and stayed with Sharp until bought by Marcus Black of Nottingham, England in 2012.

The T59 returned to England for the first time since 1962, and Black used on a few occasions before advertising for sale in 2013, when bought by the current owner. Since then, the T59 has been maintained at Simon Hadfield Motorsport. Having only been used sparingly at a couple of test days, the decision was taken to overhaul the T59. The special, original, BMC XSP 1100cc engine was rebuilt by Stuart Rolt, who noted how it was a works built unit with quite a few differences to a standard unit.

During the overhaul process, the chassis was examined and a few short sections of tubing were replaced where necessary, along with the fitment of a new roll hoop to comply with current regulations. A new set of Crosthwaite & Gardiner Cooper magnesium wheels were fitted, the braking system was rebuilt, a pair of new wishbones made, and a new clear windscreen fitted. The T59 was found to be extensively original and complete, something very rare for a Cooper.

As it sits today, the T59 is remaining fresh following the work at Simon Hadfield Motorsport, and retains what is understood to be the original BMC XSP engine, rare 6 speed Cooper gearbox, along with details like the correct chassis plate and original steering wheel.

Accompanying the car is a wonderful history file which contains the correspondence between the Cooper Car Company and Suzy Dietrich, detailed correspondence from Suzy, Reed Rollo and Christopher Briston to later owners, period information sheets about car, engine and gearbox, along with more recent invoices and information.

With Historic Formula Junior racing continuing to have a strong following around the world, whether it be in Europe, Australia, New Zealand, South Africa, the Baltics, or North America, there is a wealth of racing opportunity available and the Cooper T59 would be a superb choice to join their grids. Other occasional events in which it is eligible include the Goodwood Members’ Meeting and Revival.