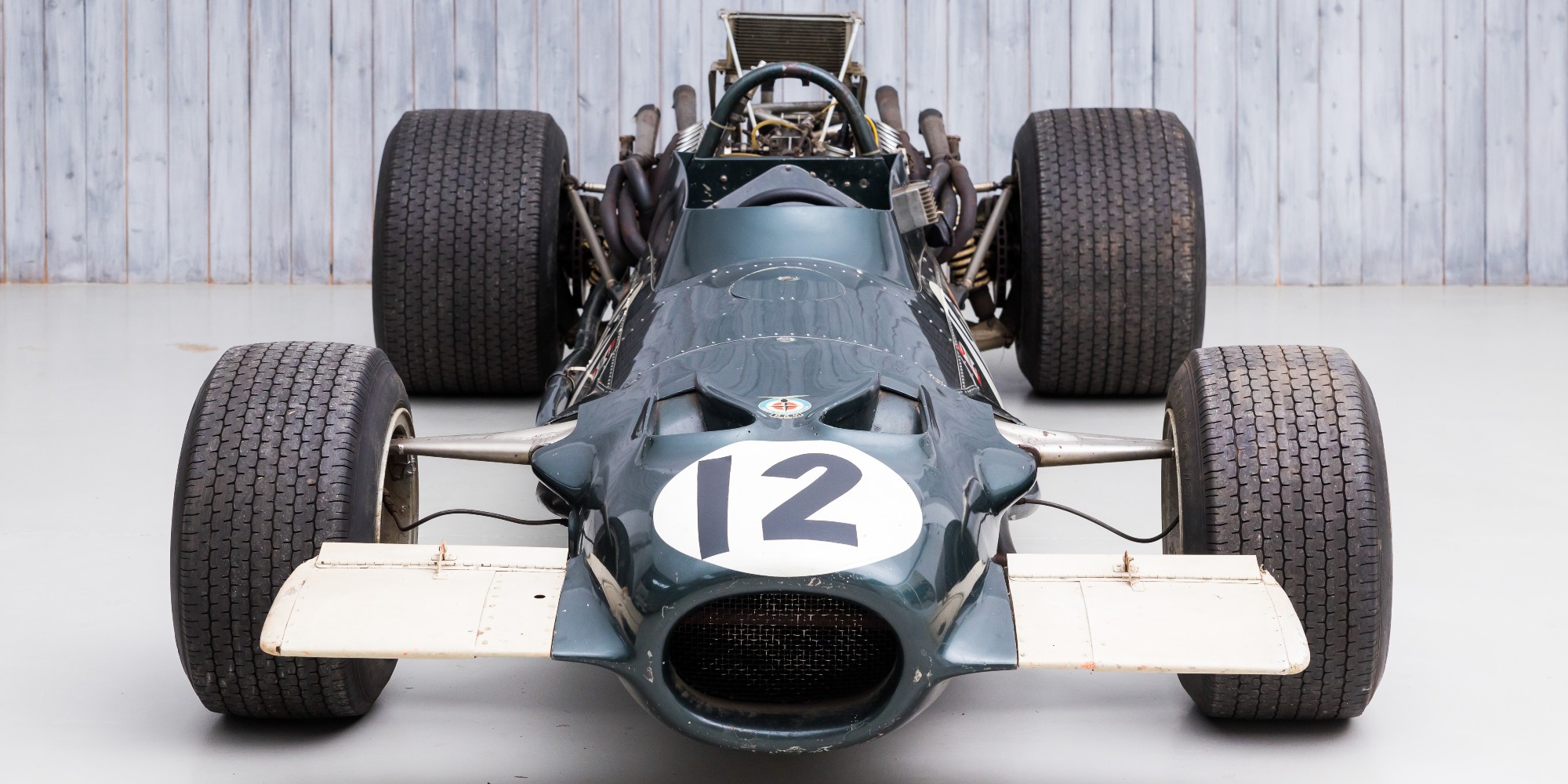 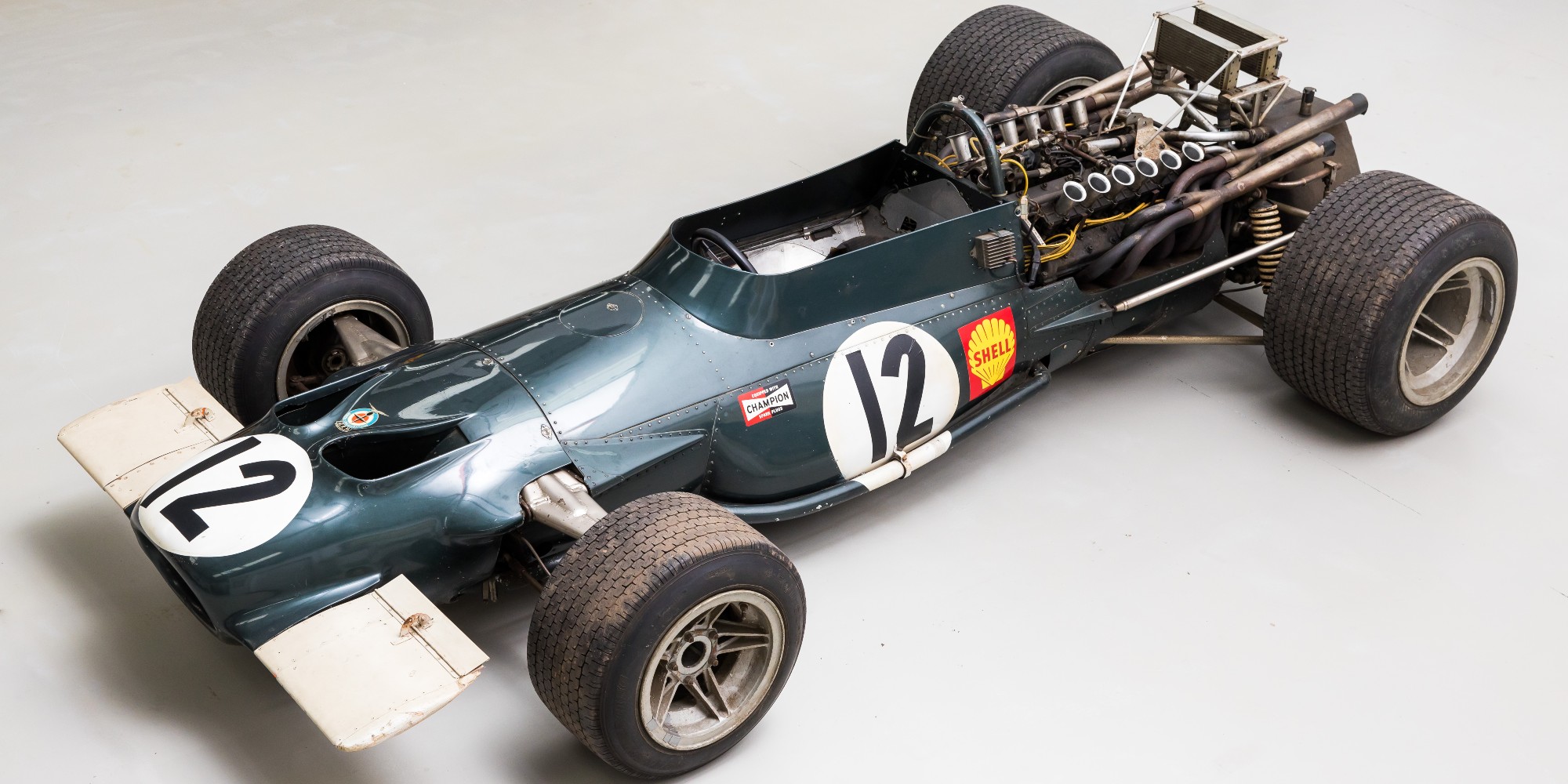 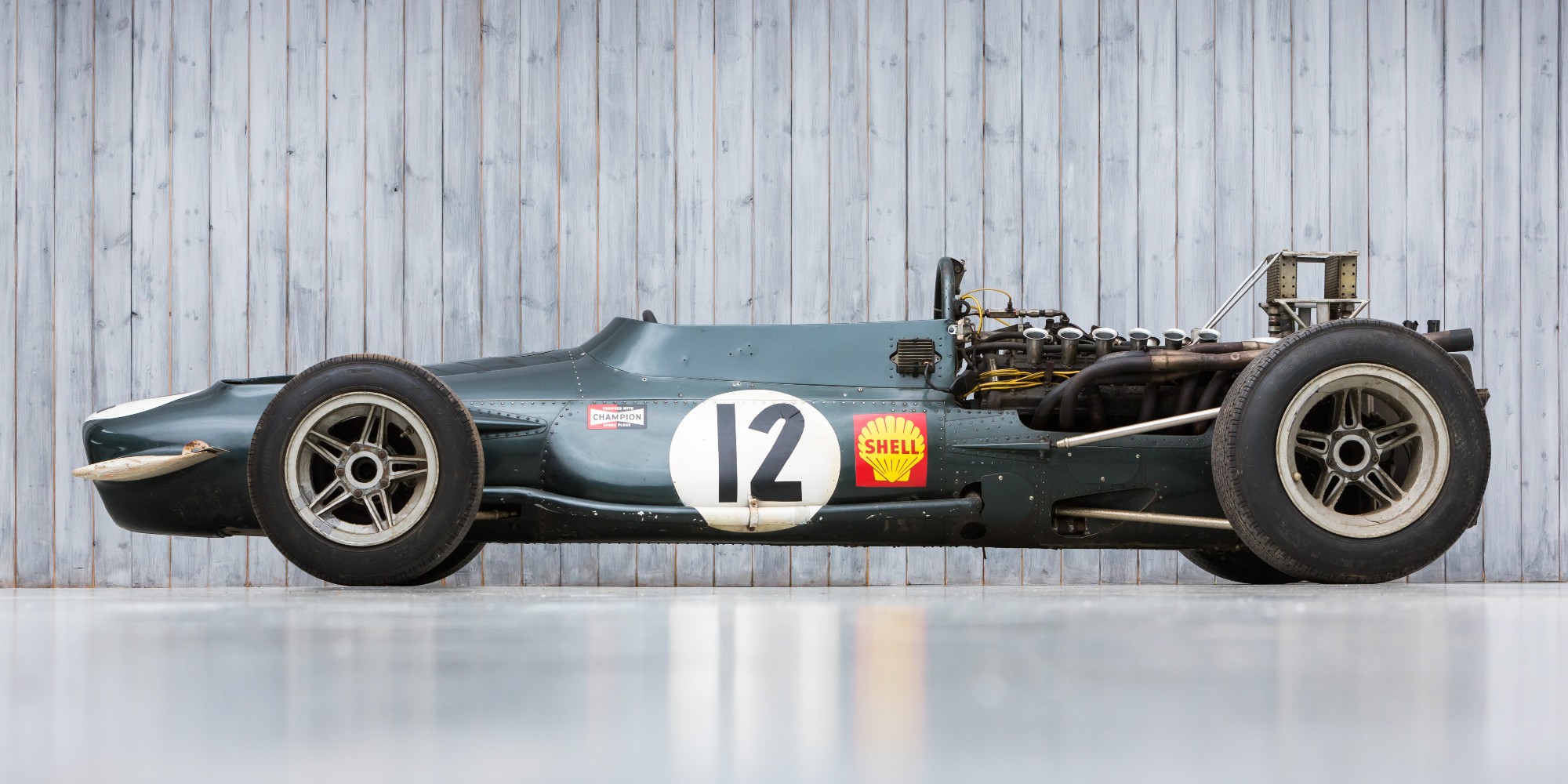 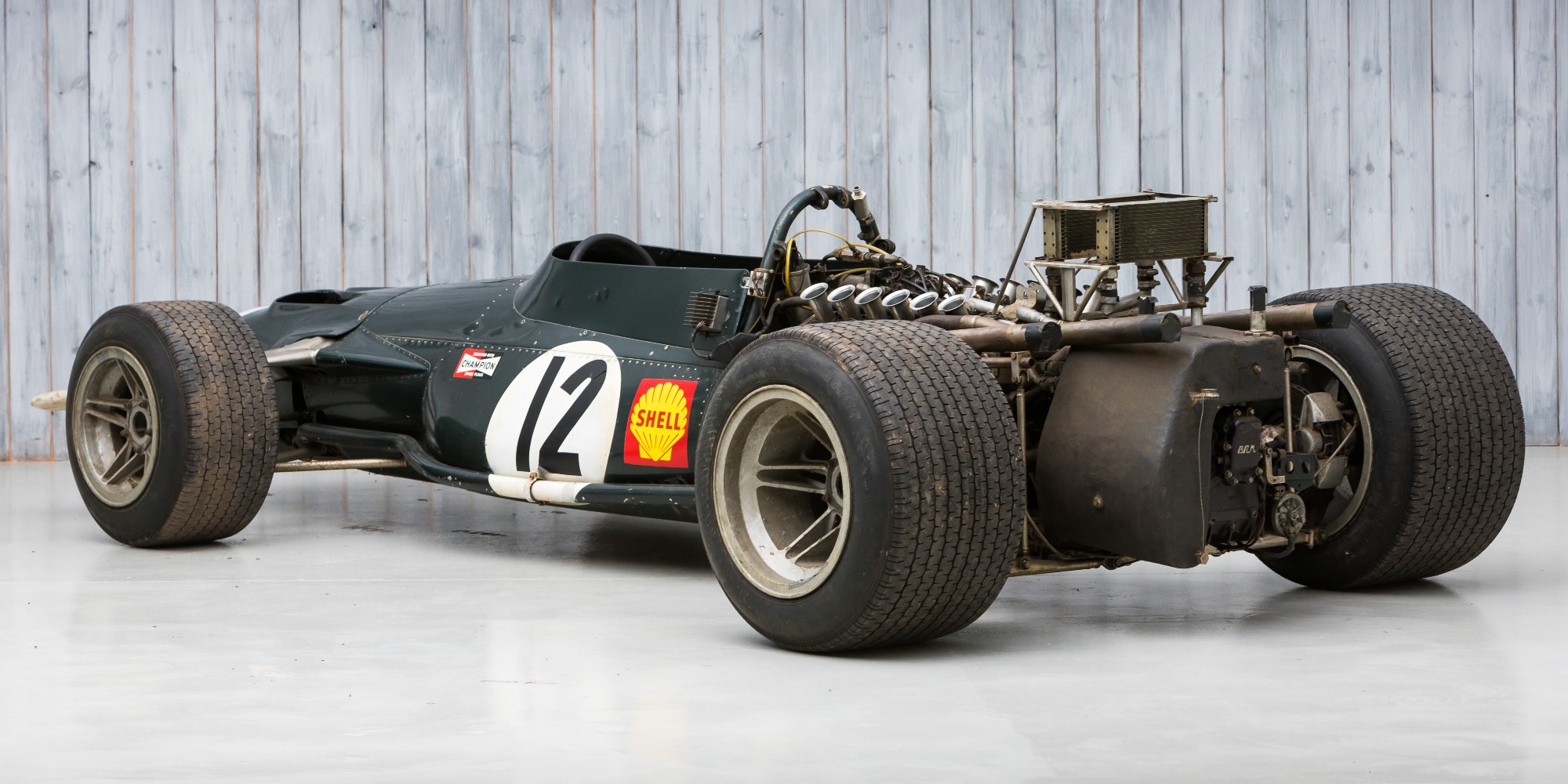 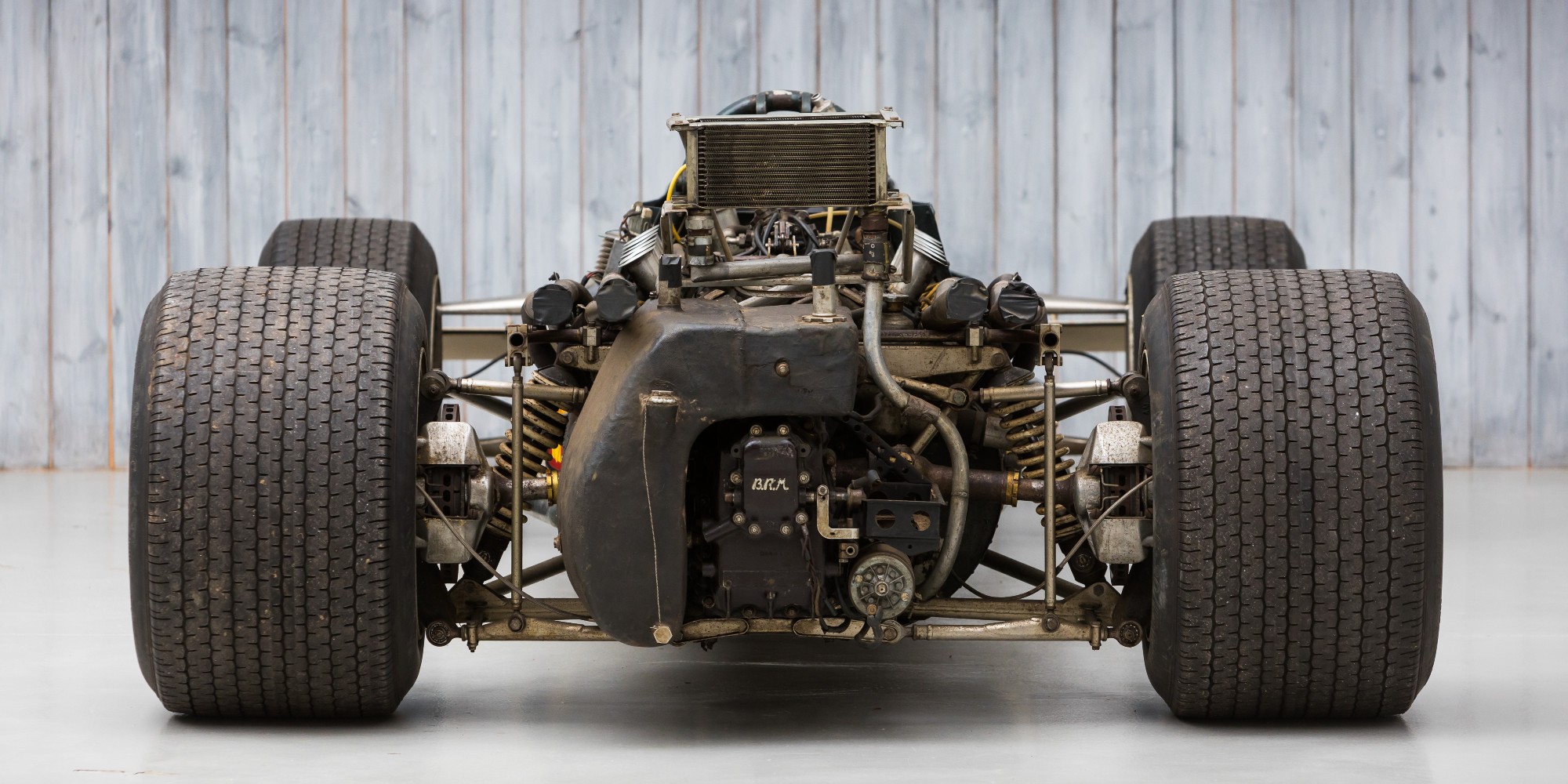 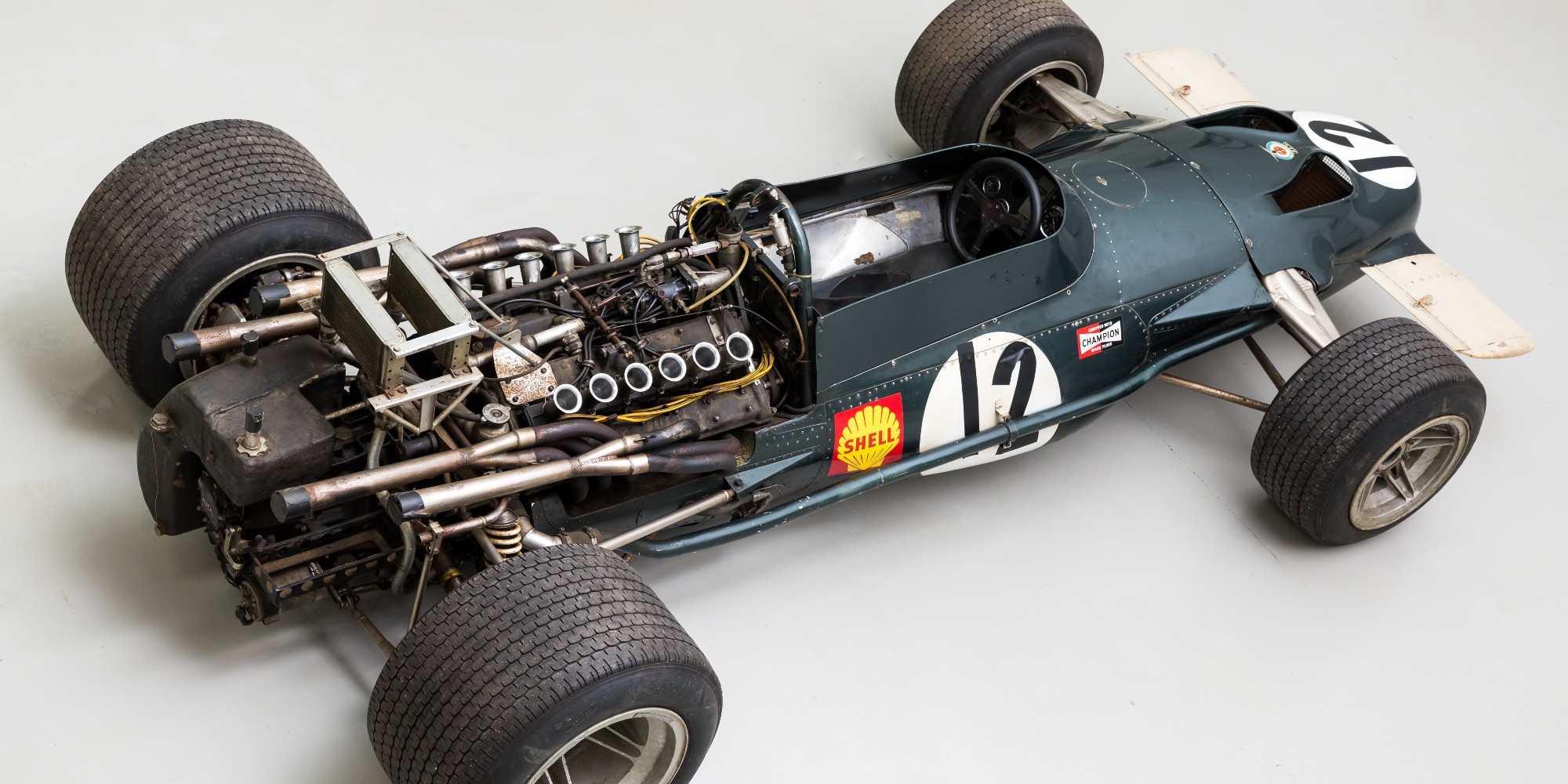 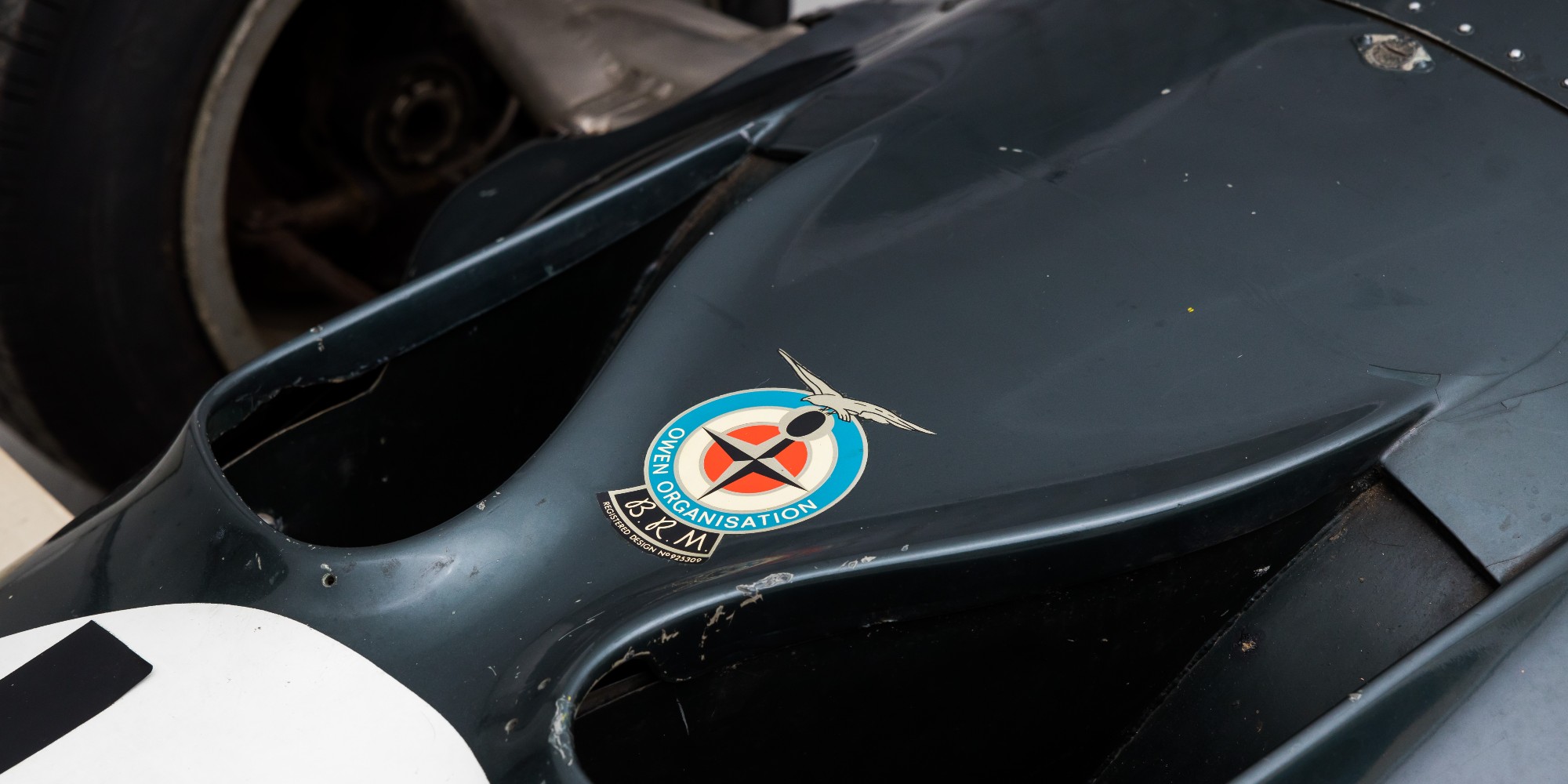 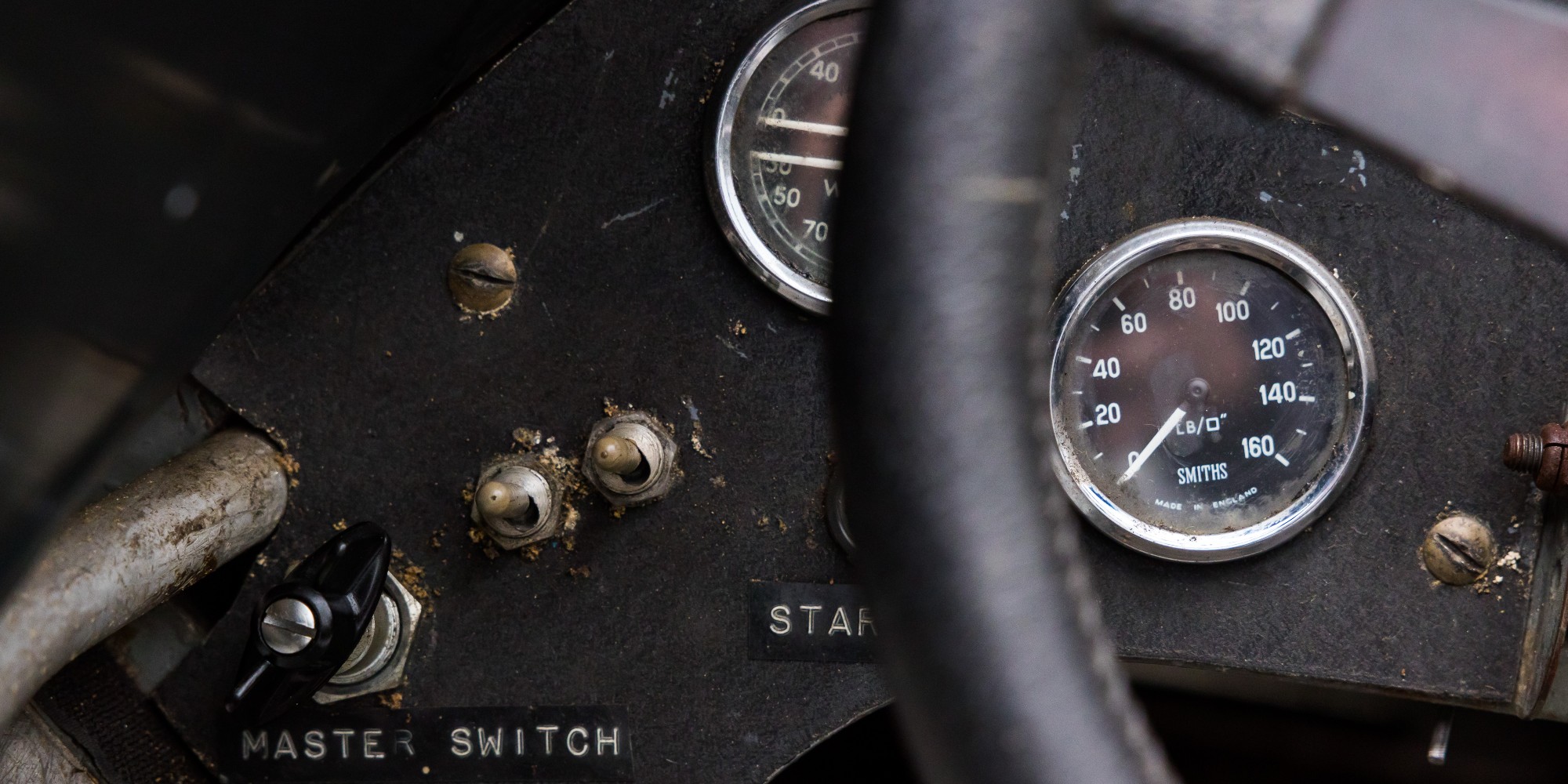 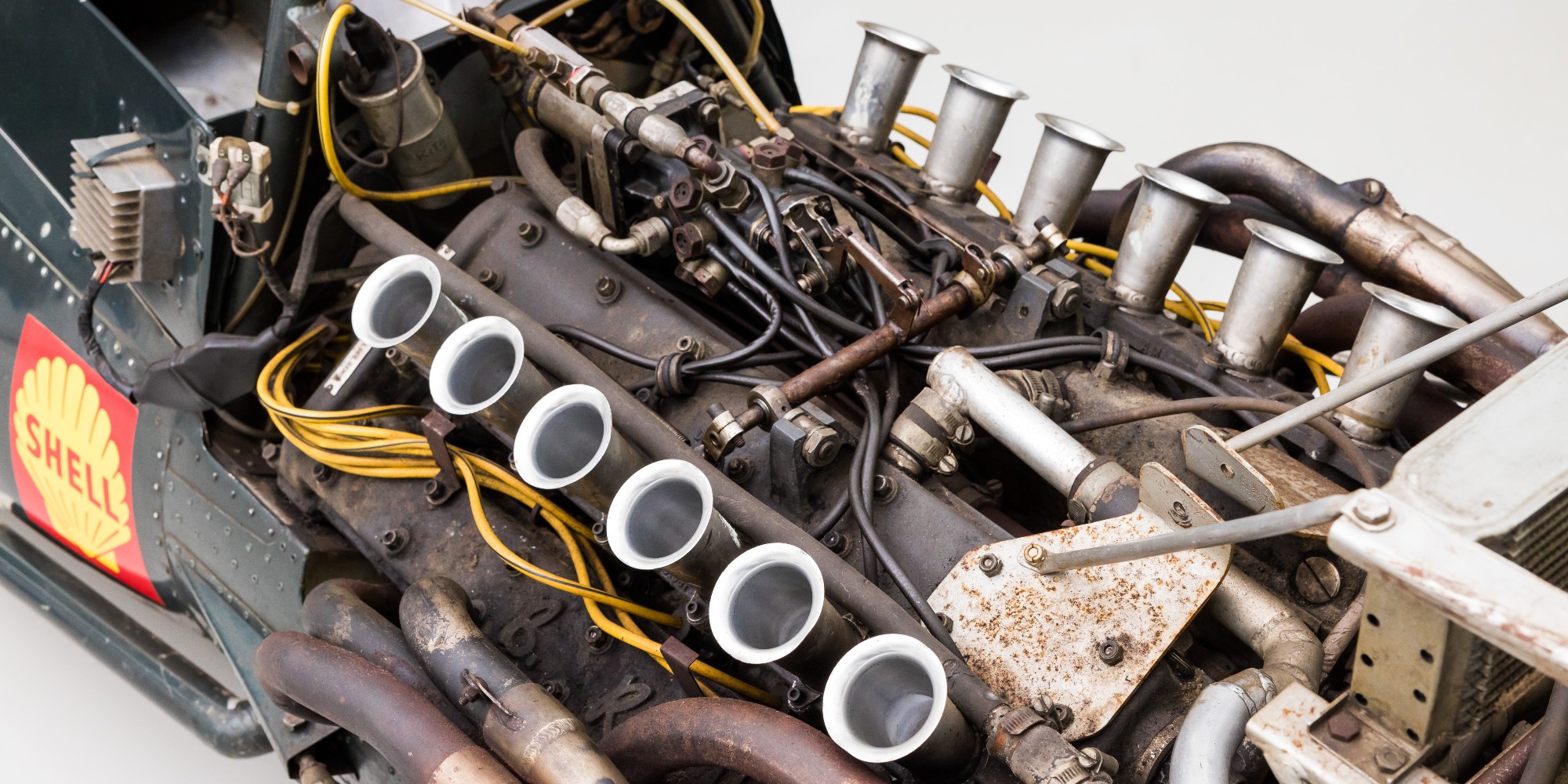 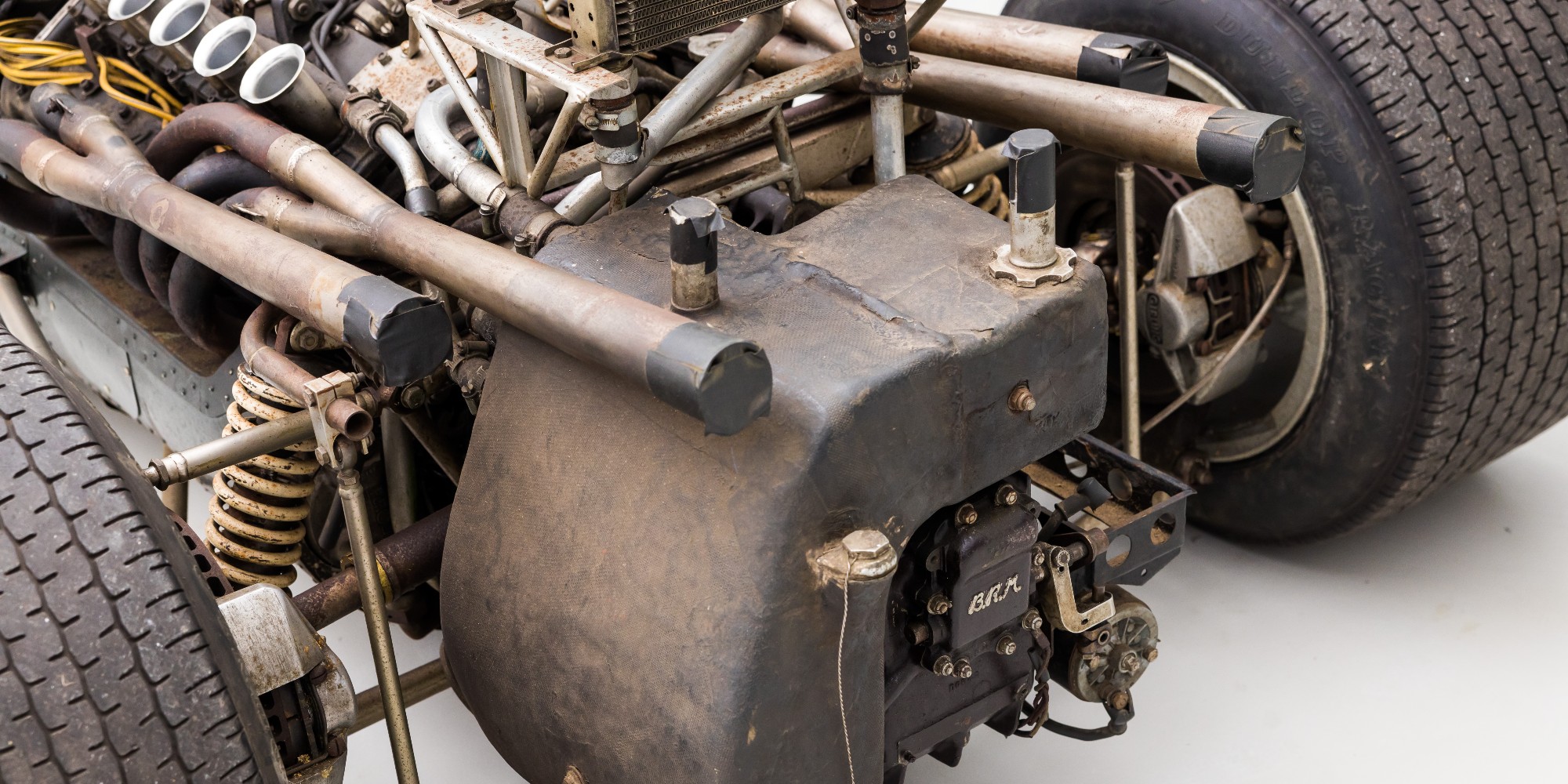 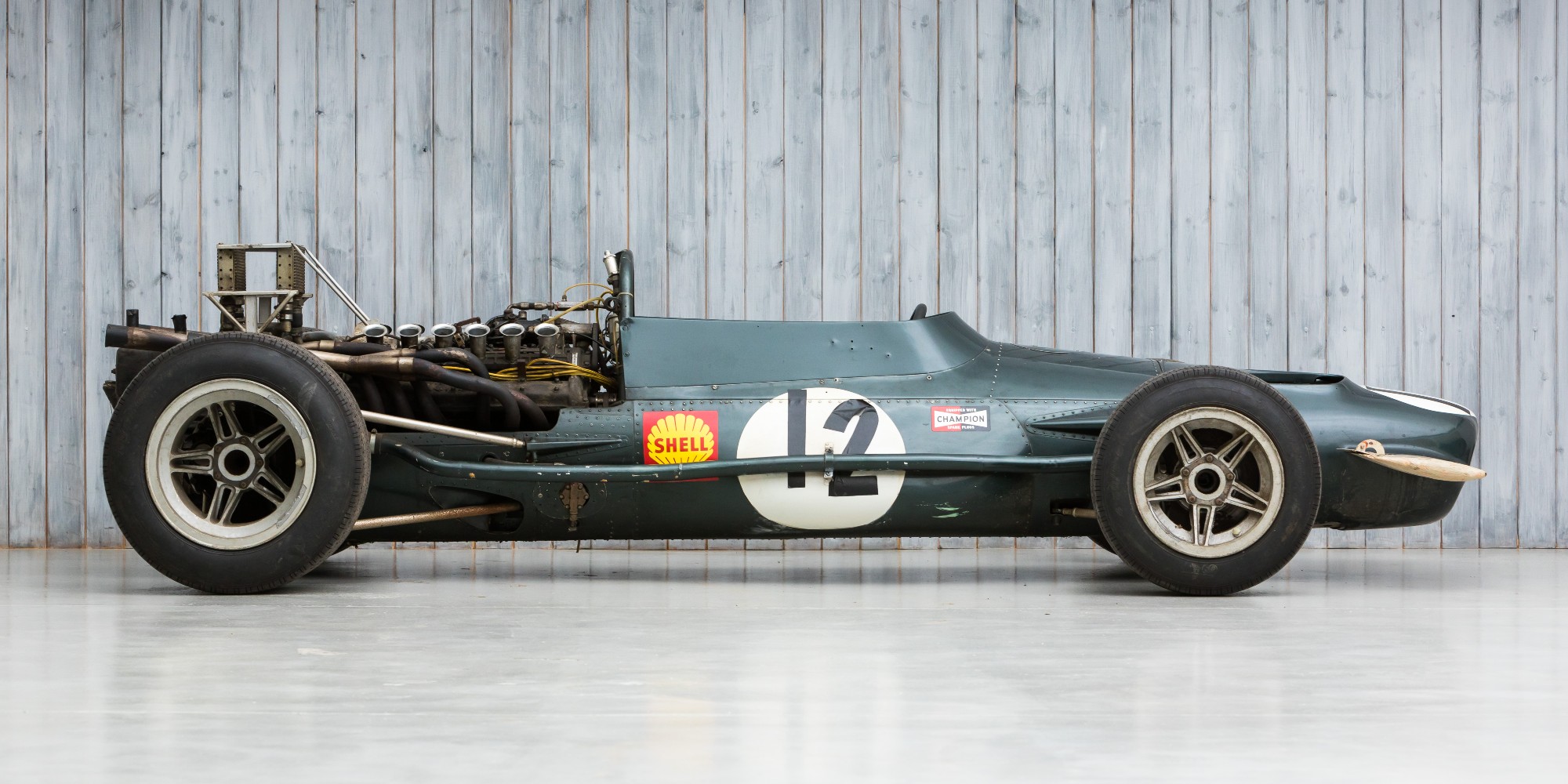 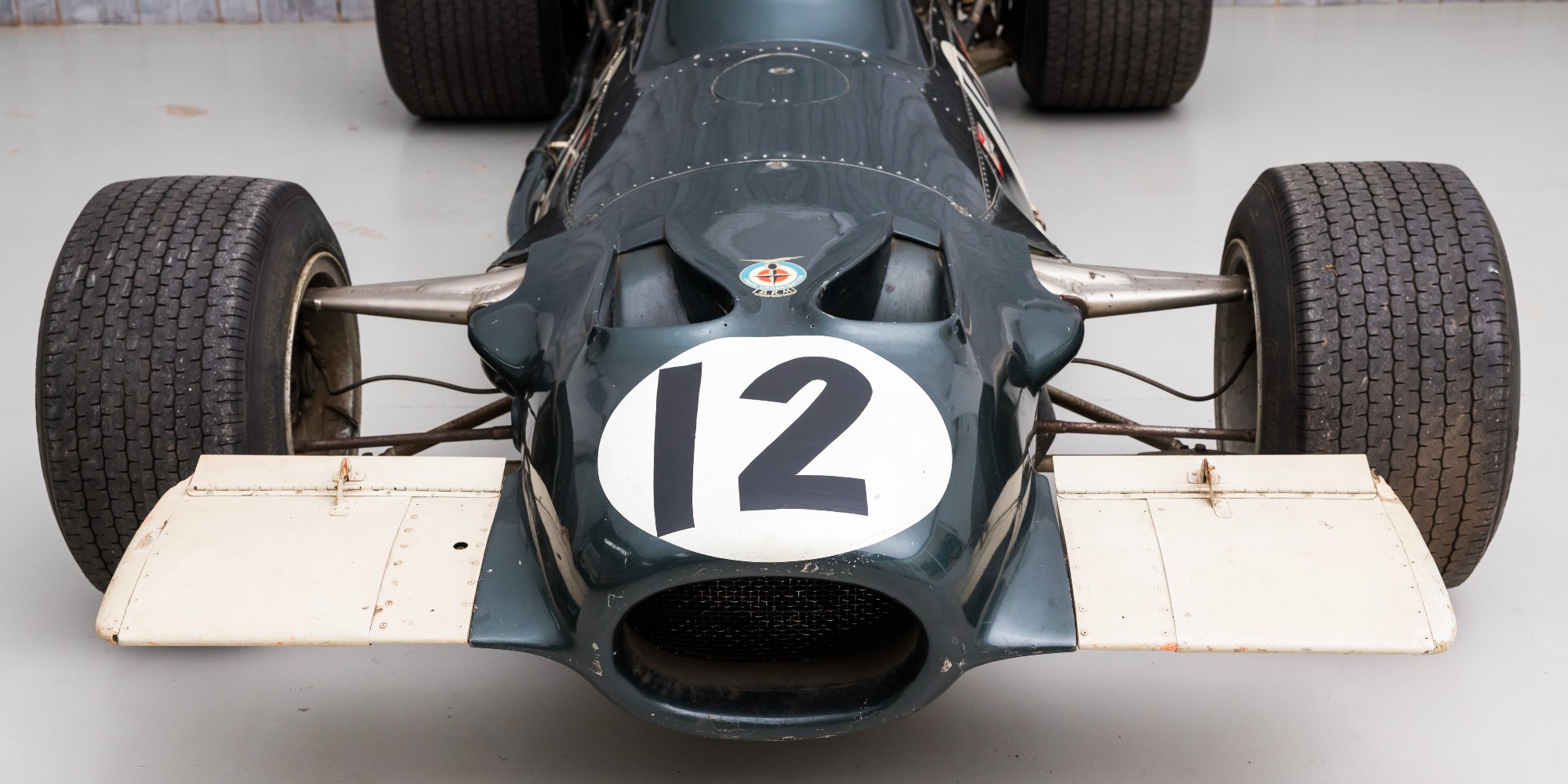 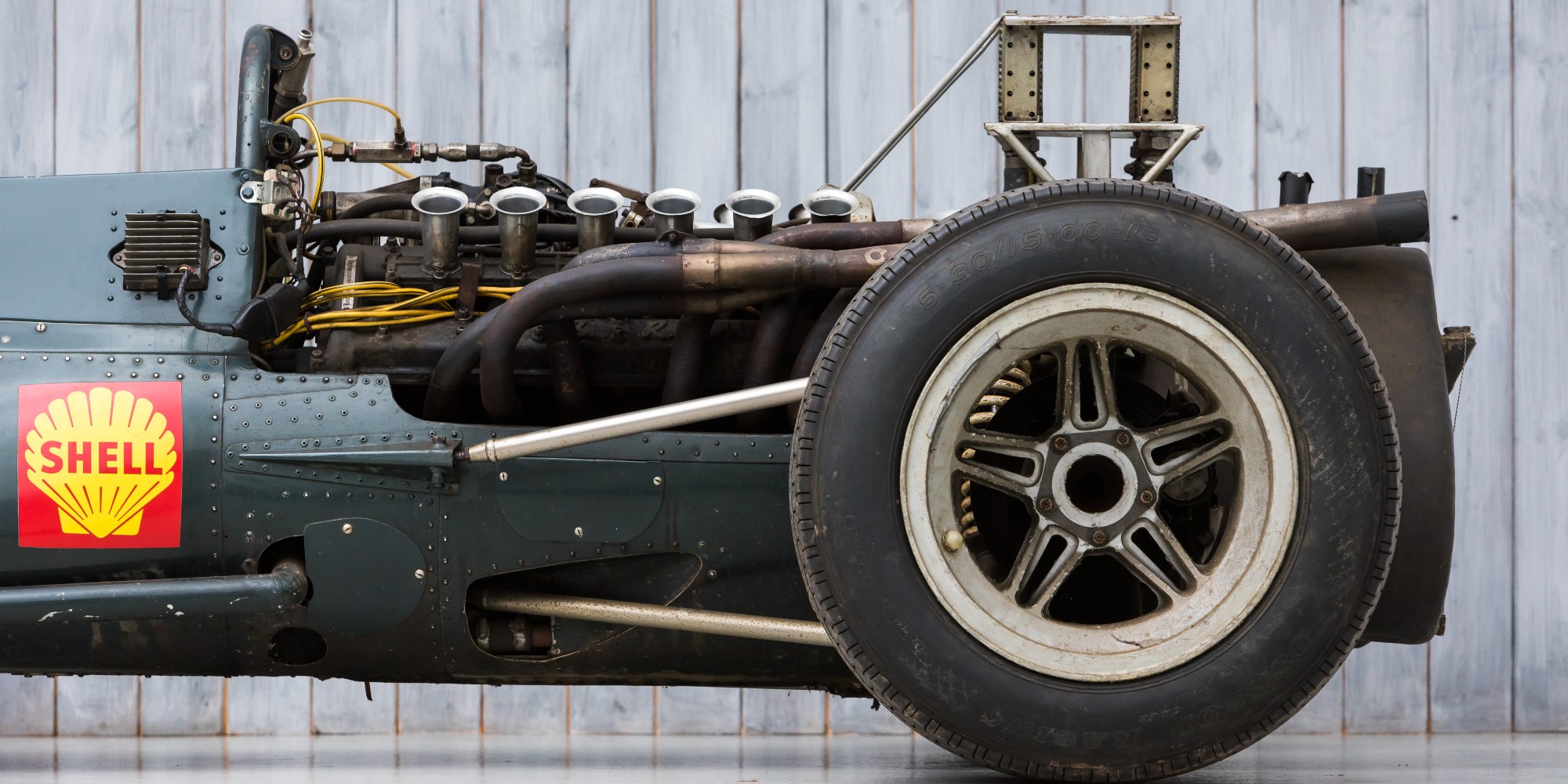 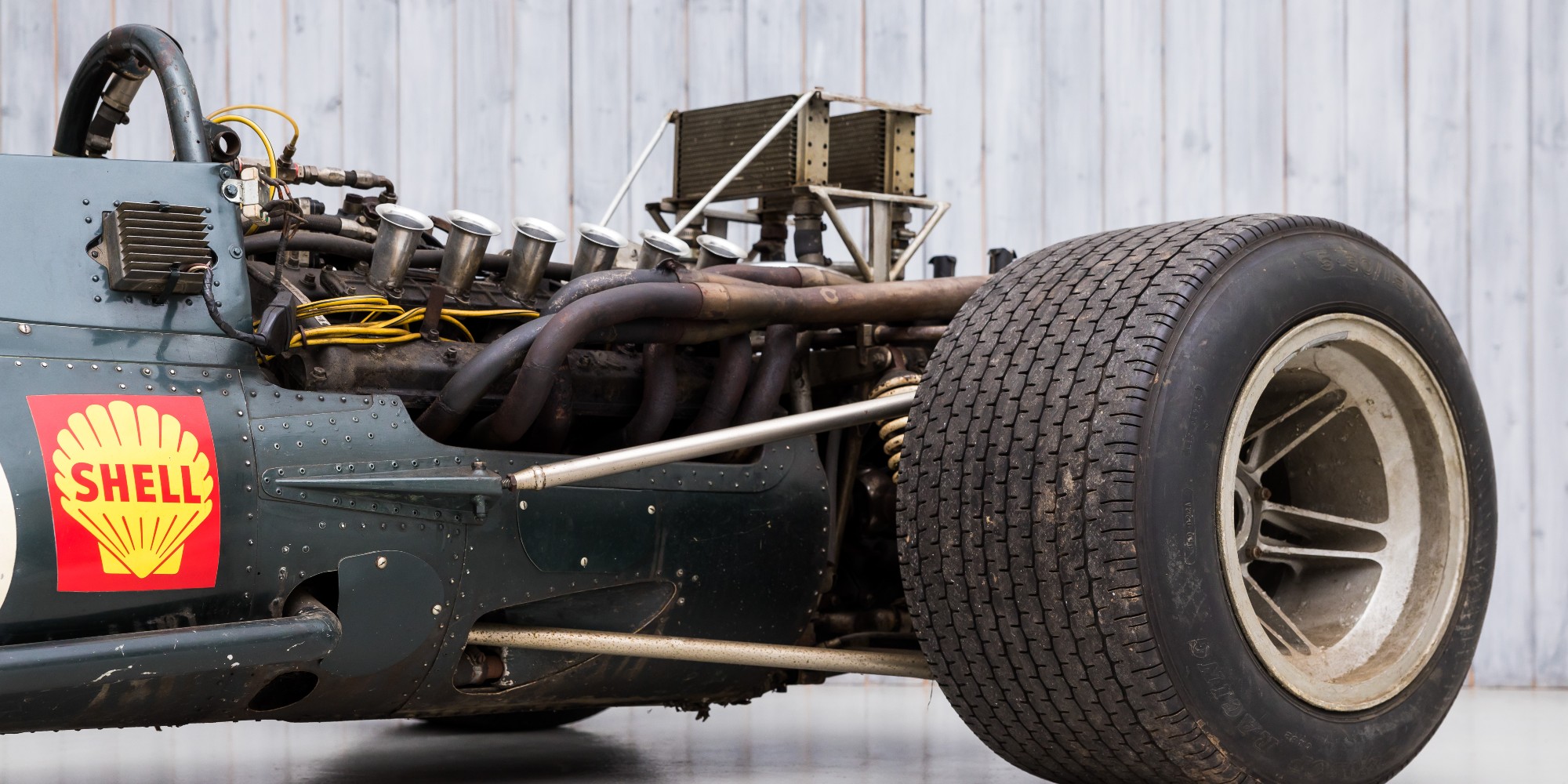 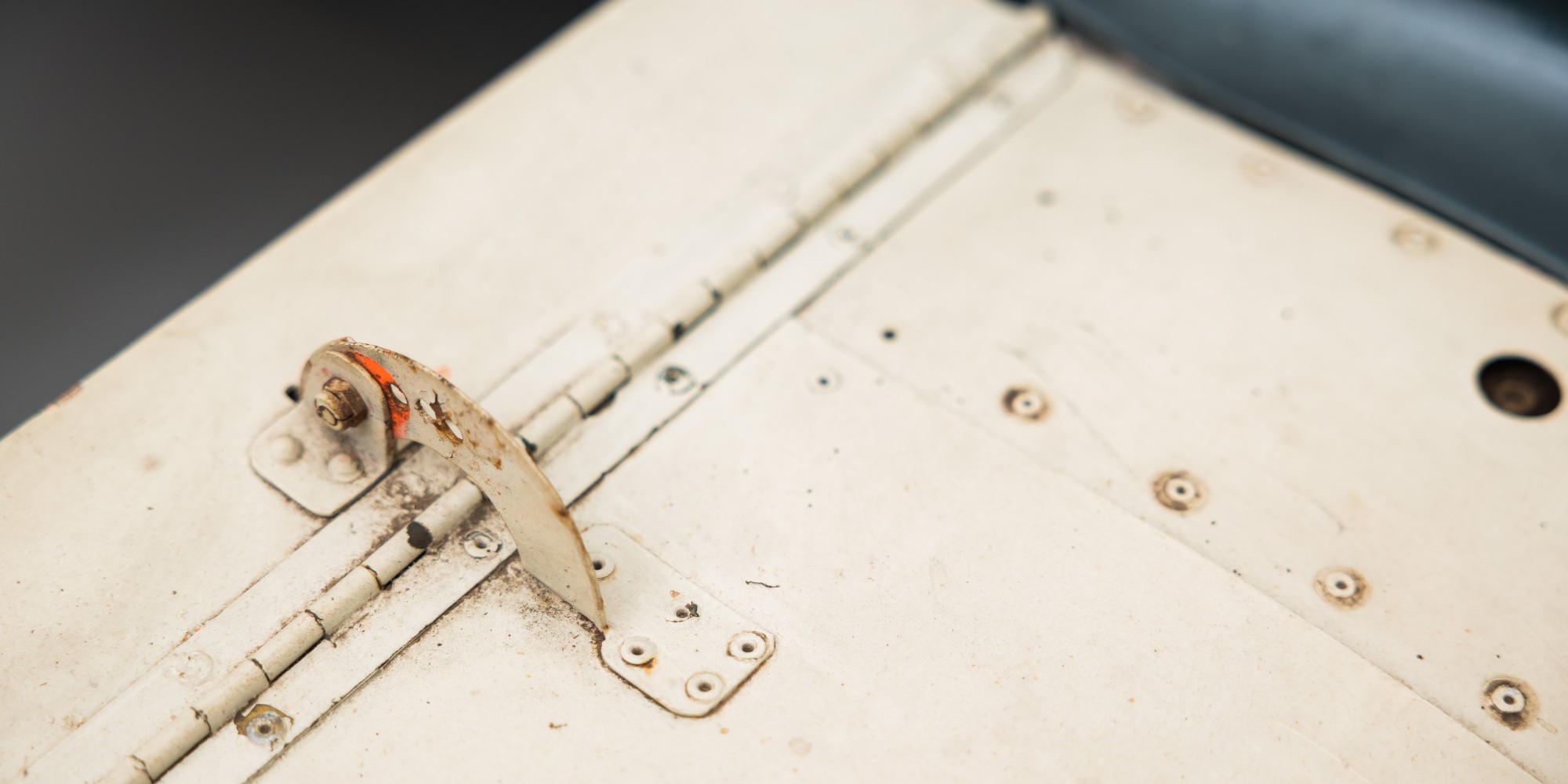 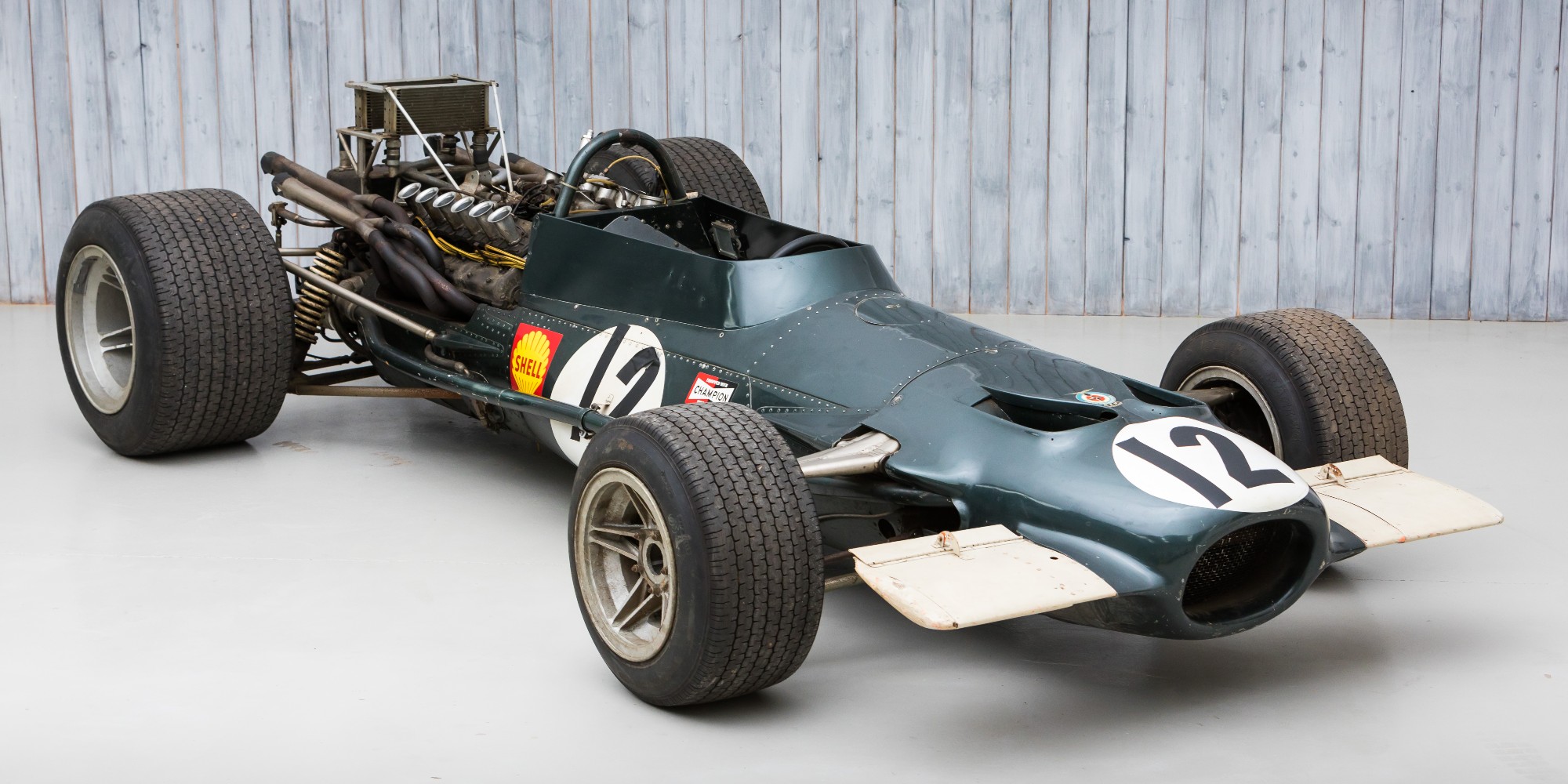 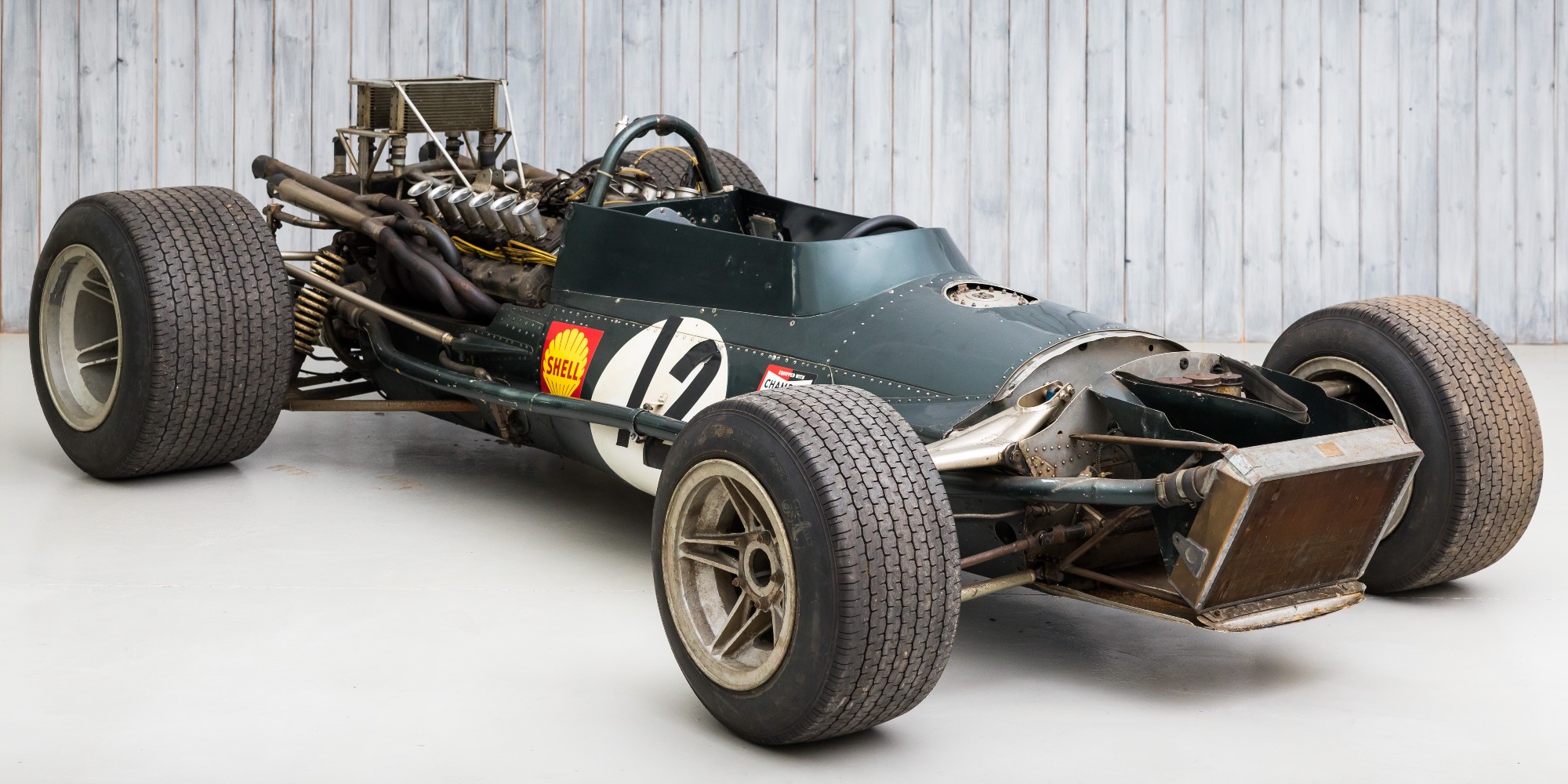 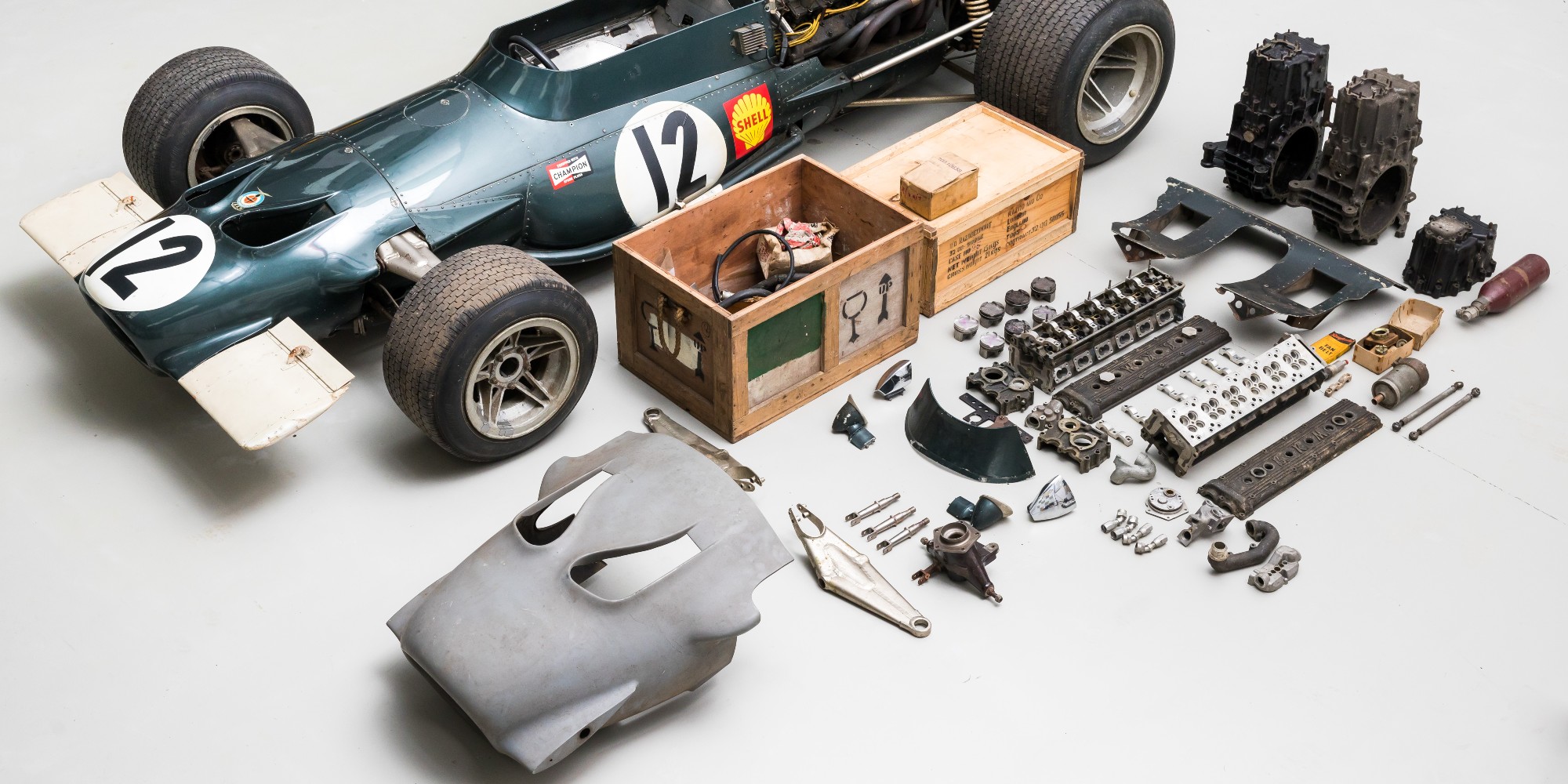 Having begun their engine manufacturing record with the immensely complicated V16, for the 2.5-litre formula of 1956, BRM developed a more straightforward 4-cylinder with which the first Grand Prix victory was taken. With the change to 1.5-litres in 1961, a quad-cam V8 was developed and yielded the maiden World Championship victory in 1962. 1966 saw Formula 1 move to 3 litre capacity and a complex H16 was developed and success was limited.

In 1968, the BRM team led by Tony Rudd developed a 3-litre V12, the P101. The new engine proved a much better proposition than the H16 and was fitted into their new P126 monocoque chassis which had been designed by Len Terry. Driven by Pedro Rodriguez, Richard Attwood and Piers Courage, the V12 powered P126 showed promise with Attwood taking 2nd in the Monaco Grand Prix and Courage 4th at Monza.

As the three P126 chassis had been constructed at Len Terry’s TAC premises in Hastings, when BRM built a further two cars to the same design, they were dubbed the P133. During the 1968 season, Rodriguez had use of the P133s and swiftly wrote one off at the Monaco Grand Prix. With the remaining P133, Rodriguez realised some distinguished results in the shape of 2nd at Spa-Francorchamps, 3rd at Zandvoort and 3rd at Mont-Tremblant.

BRM developed Terry’s design further for the P138 and incorporated a new BRM gearbox in place of the Hewland DG300 which featured in the P126 and P133. Two P138s were built and debuted in 1968 for Rodriguez, though he preferred to continue racing the P133.

With the arrival of John Surtees from Honda in 1969 came a new force and winds of change. BRM had been developing a four-valve version of the V12, the P142 engine, which was ready for the ’69 season and team leader Surtees debuted the new engine in a P138 in South Africa.

BRM’s next design was the P139. Based largely around the principles of the P138 that went before it, the P139 featured increased fuel capacity with ballooned sides to the monocoque. The initial run for the new P139 showed that the design wasn’t yet ready for competition, and it led to Tony Rudd being shown the door.

The first of the new P139 chassis produced in early 1969, P139-01 made its on track debut in practice for the Dutch Grand Prix at Zandvoort in June for John Surtees with a distinctive round nose. Surtees didn’t get on well with the new car, so instead opted to race the existing P138. The P139’s run at Zandvoort would be the only time that a P139 would carry BRM’s fluorescent orange ring around the tip of the nose, and high wings had been banned during the Monaco Grand Prix meeting in May so an aluminium swooping wing around the rear of the engine and over the back of the car was adopted.

With Rudd having exited the Bourne based team, which he had been a key part of since 1951 and their first grand prix, the P139 saw revisions to address the apparent shortcomings. In Rudd’s place came Tony Southgate, returning to the UK from his time in the USA with Dan Gurney’s Eagle outfit.

The French Grand Prix in early July was missed while the revisions were being undertaken, and P139-01 was ready for the British Grand Prix two weeks later. Development work by Southgate, Tim Parnell and Aubrey Woods pushed the P139 forwards and flashes of promise were shown. The rear of the monocoque had been significantly strengthened, the fuel distribution within the monocoque had been lowered and the suspension pick-up points had been repositioned.

As it arrived at Silverstone, P139-01 was reported to be nearly 70kg lighter than the earlier P133, and importantly to the regulation weight limit.

Surtees, much happier with P139-01, qualified in sixth on the grid next to McLaren and Rodriguez’s Ferrari.

In the race, Surtees made a very quick start and climbed to third on the first lap, only for the front suspension to fail and collapse as he rounded Stowe corner which forced retirement when he returned to the pits.

At the Nurburgring for the German Grand Prix in August, P139-01 was fitted with a low mounted, more conventional rear wing for Surtees. It suffered with oil and fuel leaks during practice and was withdrawn from proceedings before the race.

Next was to the Italian Grand Prix at Monza, and P139-01 was refitted with the swoop style rear wing along with a modified rectangular nose with smaller front winglets. A pair of eyelets, perhaps for the fitment of met-elastic bushes, had been welded onto the rear side of the roll hoop but were unused.

Surtees qualified P139-01 in tenth position alongside Graham Hill’s Lotus 49, though was delayed during the race with issues in the pits. Nonetheless, Surtees did carry on and accumulated useful mileage in P139-01.

In Canada at Mosport in September, Surtees again drove P139-01. The modified rectangular nose seen at Monza was retained, though with the winglets lengthened with panels riveted over them. Surtees qualified in 13th position and was forced into retirement on the 15th lap of the race with engine maladies.

From Mosport it was to Watkins Glen for the U.S. Grand Prix at the beginning of October. Surtees qualified P139-01 in 11th place, but ran very well in the race and without problem.

As others faltered around him, Surtees moved up to take 3rd position and maintained it to the finish to take what would be the best result for a BRM P139, and the BRM team’s only World Championship podium of the season.

At the final round of 1969 in Mexico City, P139-01 was driven by George Eaton for BRM as their third entry. The Canadian started at the back of the grid but retired on the 6th lap with gearbox issues.

During the meeting at the Mexican Grand Prix, P139-01’s engine required attention within the sump, and the BRM team accessed this by putting the car on its side, leant on the outside edges of the wheels. This remarkable moment was captured on film and immortalised.

P139-01 was retired from contemporary competition after the Mexican Grand Prix and the P142 V12 engine was removed to be used for the efforts of 1970 with the upcoming P153.

With no P142 V12 engines available at the time, a P101 V12 engine, number 101020 would be supplied, with it initially proposed to be delivered unfitted.

It was later agreed that for a greater price the work would be undertaken at Bourne to install the P101 engine and make the P139 ready for use for its new owner.

After arriving at its new home in 1972, P139-01 was run up though was found to have a misfire. It was returned to BRM at Bourne for the issue to be addressed and P139-01 was subsequently tested on the road to check it was running cleanly!

Back at its home, P139-01 was also run up again by the family owners and to get to grips with it, they tested on a local farm road.

Enquiries were made to Dunlop tyres about the best choice of rubber for hillclimbing and sprints, and a most informative reply was received. The first public outing for P139-01 in its post-works life was at the Shell National Speed Trials at Brighton in 1973. The family and P139-01 received the attention of the Evening Argus newspaper and featured with a photograph in the article on the speed trials.

The second and final public outing for P139-01 came at the Weston-Super-Mare Speed Trials shortly after Brighton. Once parked back in its home after the second speed trials, P139-01 did not leave there again until we transported the car to our showroom.

Today, P139-01 remains exactly as last used and supplied to the current family owners by BRM themselves. It is incredibly rare for any car, let alone a Formula 1 car, to be kept in complete but untouched condition for such a long time.

When researching period photographs of P139-01, a number of details can be seen in the 1969 photos which are still unchanged and visible on the car today. For example, in the photos from the Mexican Grand Prix where P139-01 is on its side with the sump removed, panel work and rivet details are shown, and furthermore paint scratches around the bottom of the monocoque can be seen. Those remain exactly the same today, along with the overspray around the underside of the footwell.

Other details can be spotted with John Surtees seated within P139-01 with a single tie-wrap holding the fuel tank breather valve to the roll hoop, which itself sports a jubilee clip with a distinctive round rear face. Those remain unchanged and in the same position.

Photos taken in the Monza pits with Surtees discussing with Tim Parnell show details of the seat back and inner cockpit, including a strip of velcro used to hold Surtees’ Nomex seat liner in place. The velcro remains and is unaltered.

P139-01 is accompanied by the original parts supplied to the current family owners by BRM.

What’s more, all of the original correspondence and invoices for the acquisition of P139-01 from BRM remain with the car today along with the Dunlop letter. A family friend took a series of very high quality photographs on P139-01’s initial arrival at its family home, and these further document its sheltered life after BRM.

An example of purity with pedigree of the highest level, P139-01 has not been seen since the Weston-Super-Mare speed trials having remained in for the majority of the 50 year current family ownership and is now available publicly for the first time in its life.

As the car which scored BRM’s best result of the 1969, a fine podium with former Formula 1 World Champion John Surtees at the United States Grand Prix, P139-01 hails from a golden era of Formula 1 and is an unrepeatable time-warp.