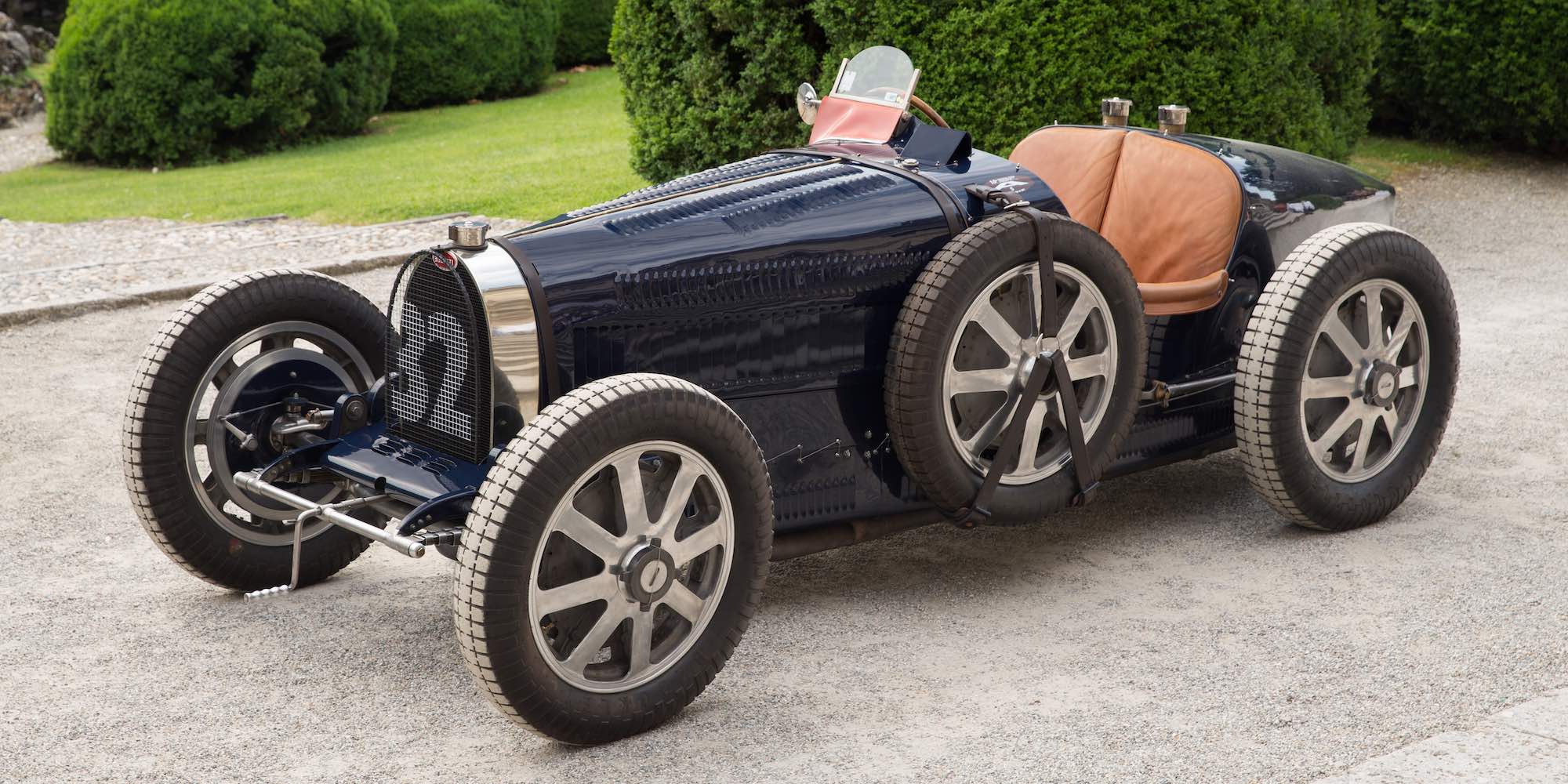 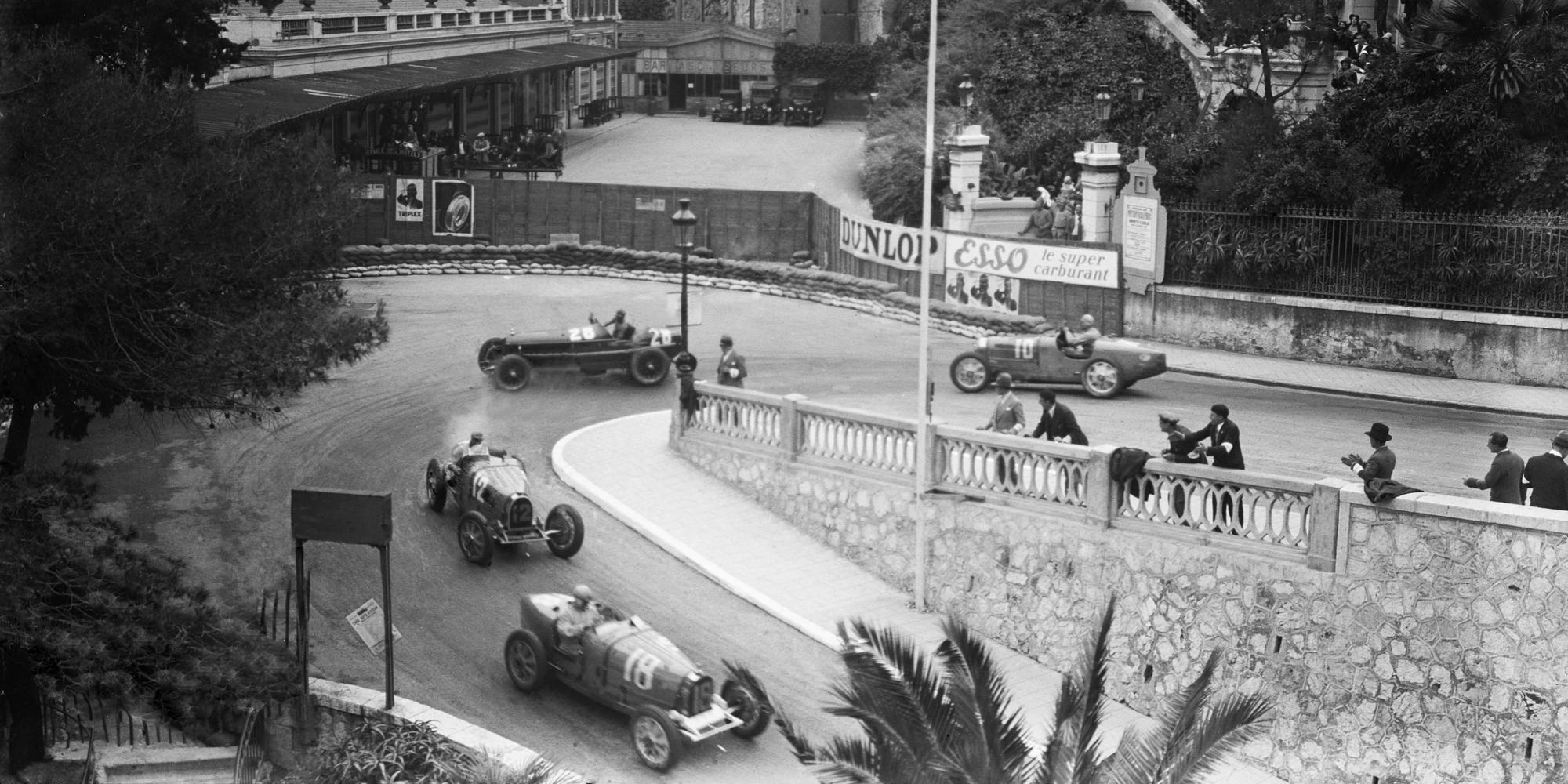 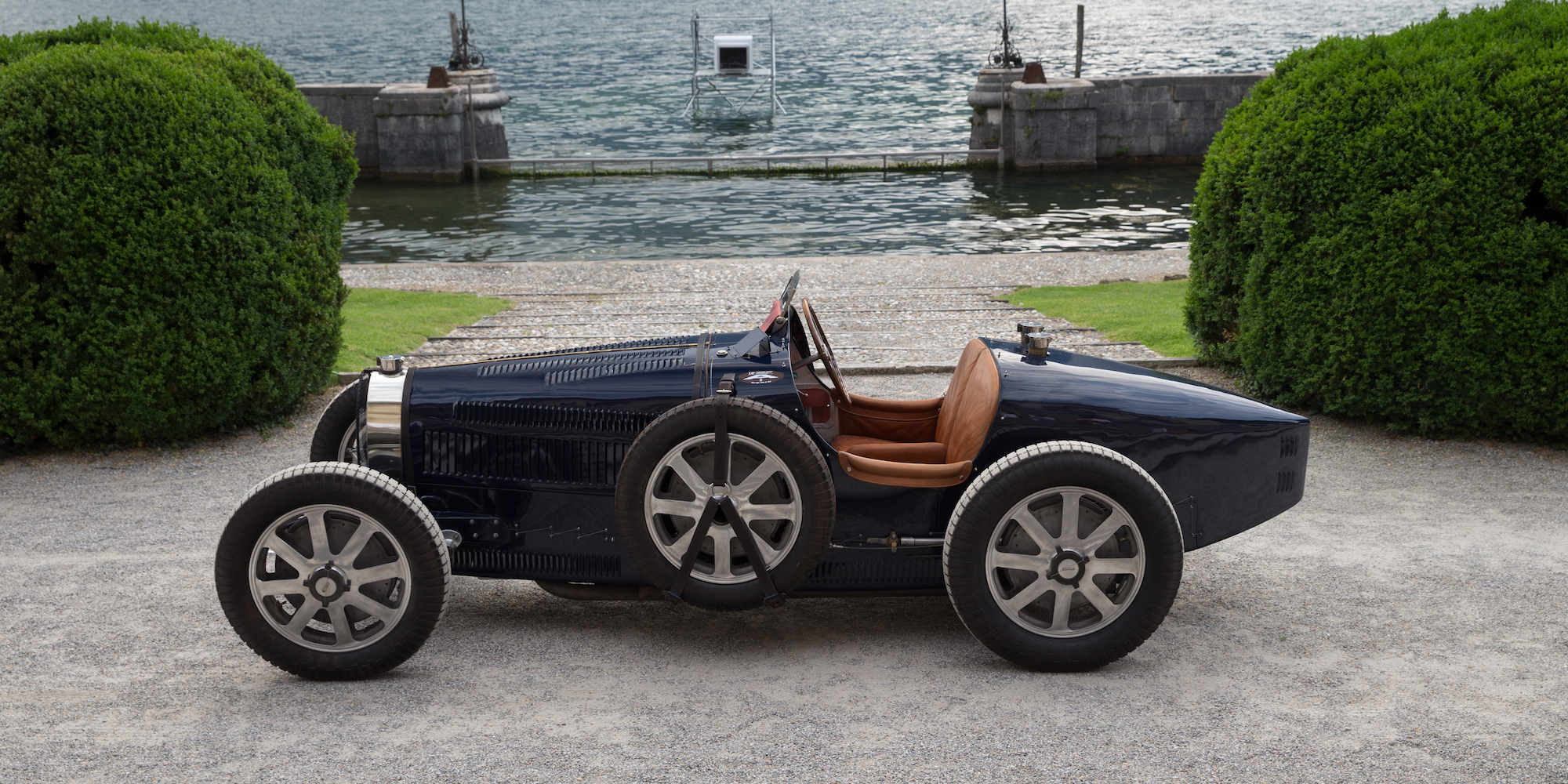 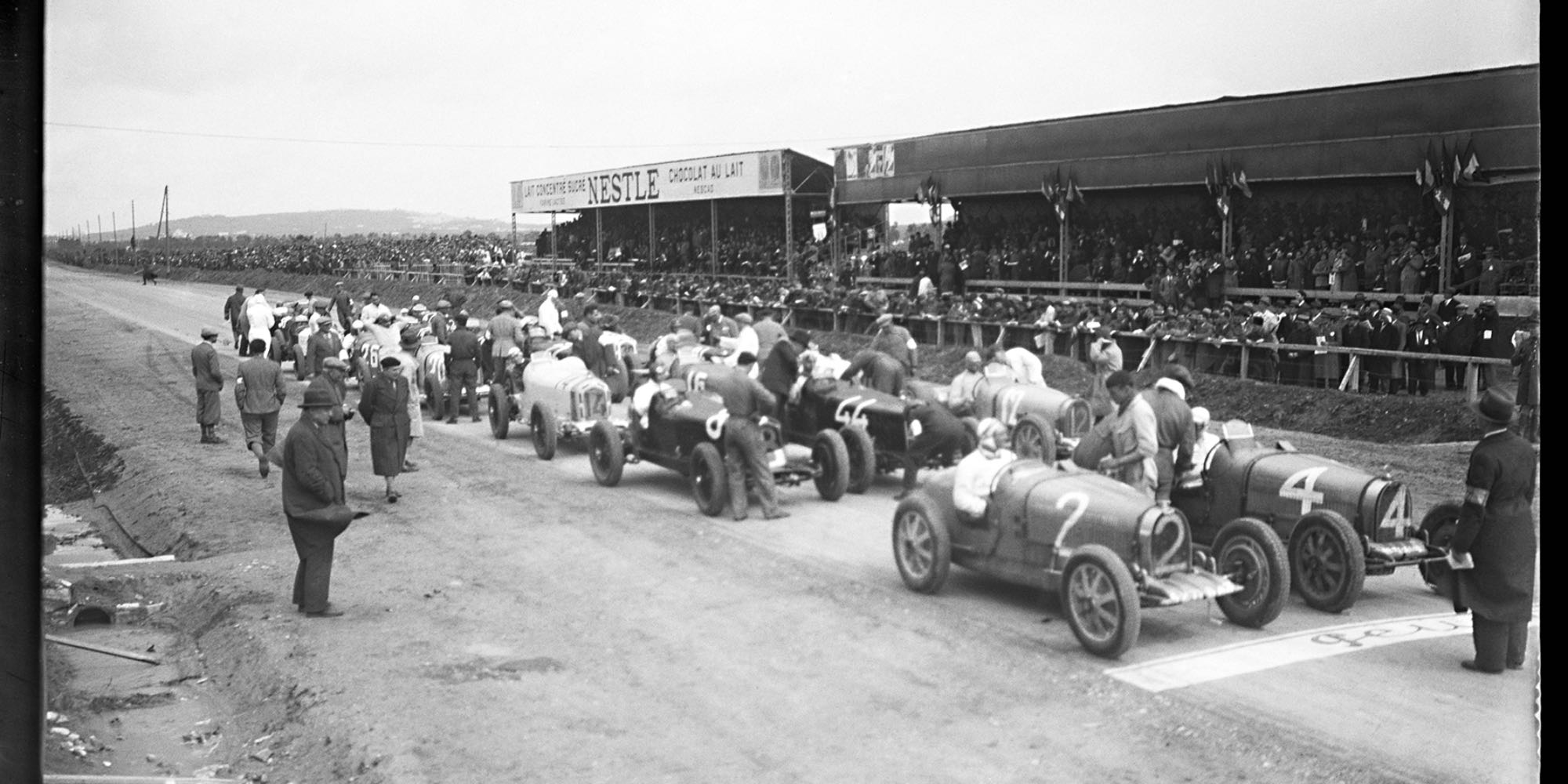 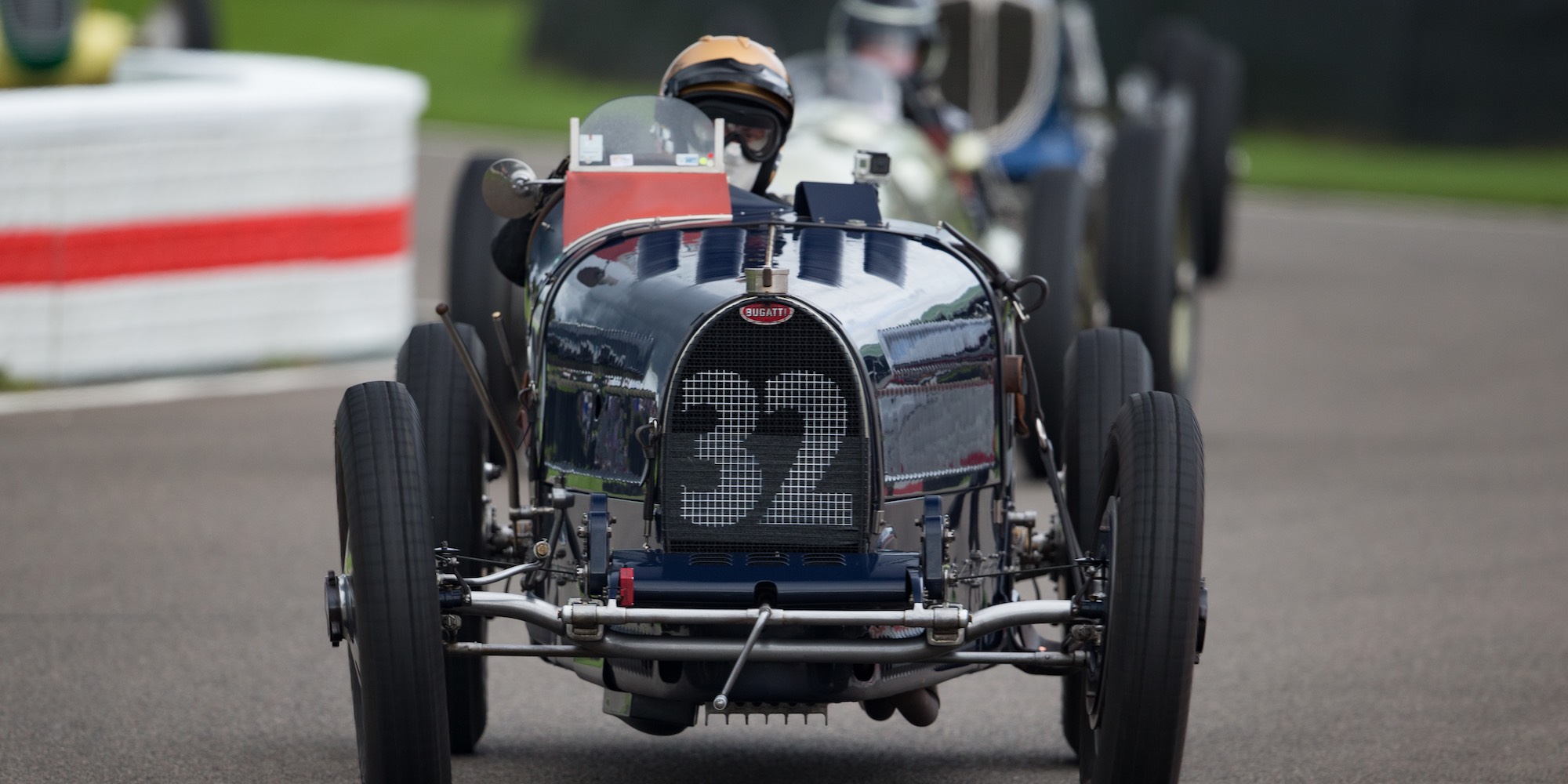 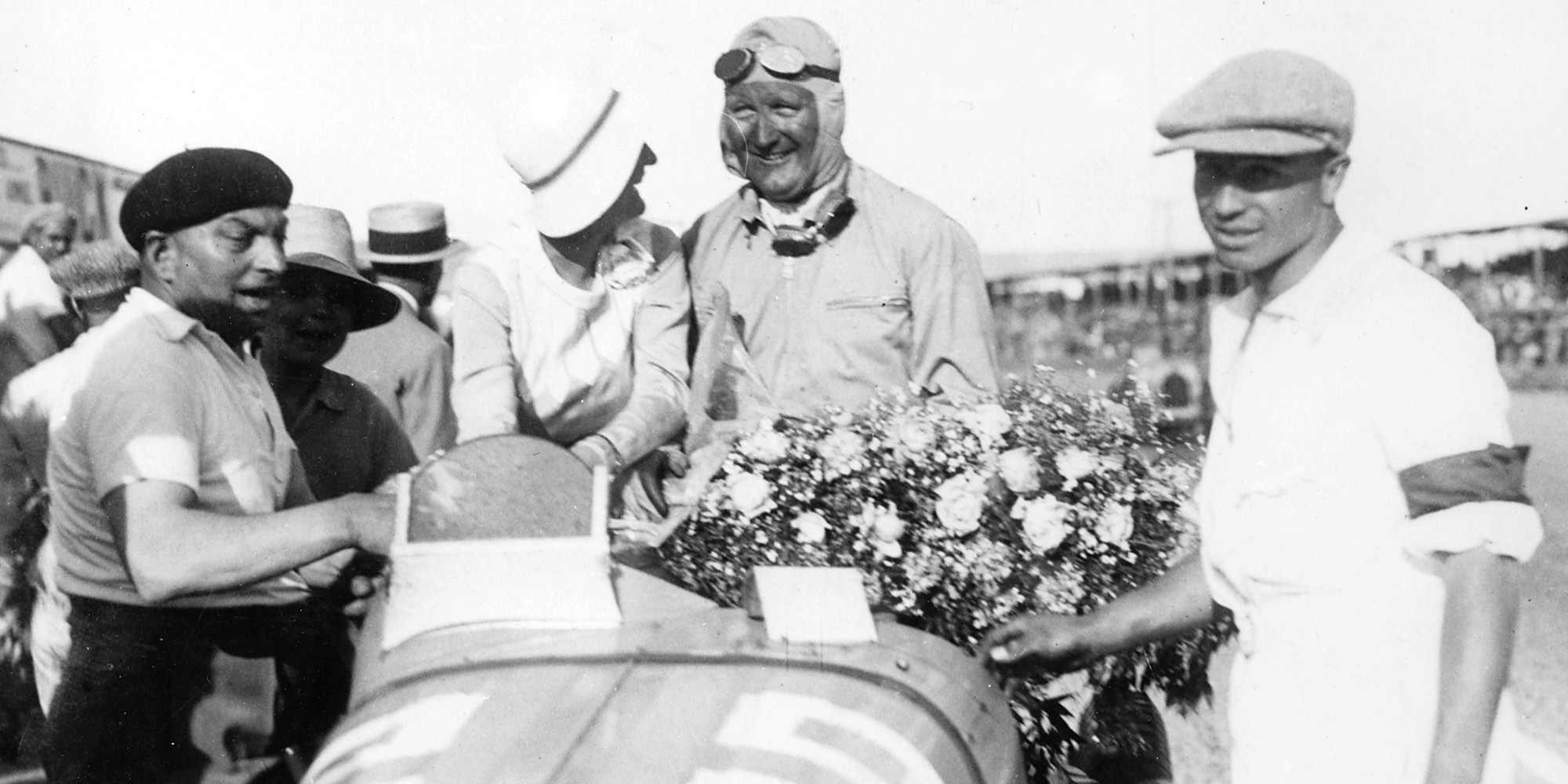 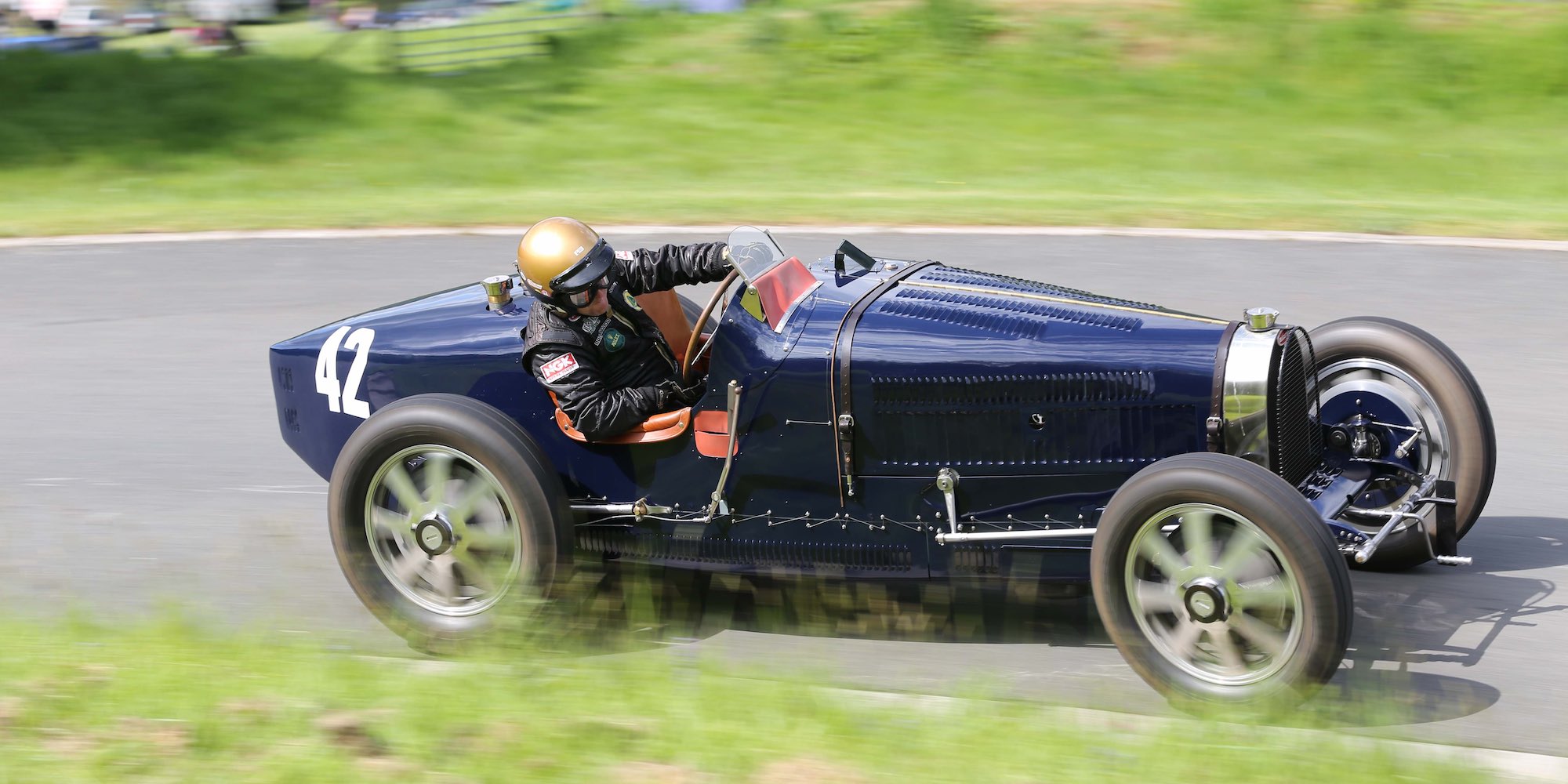 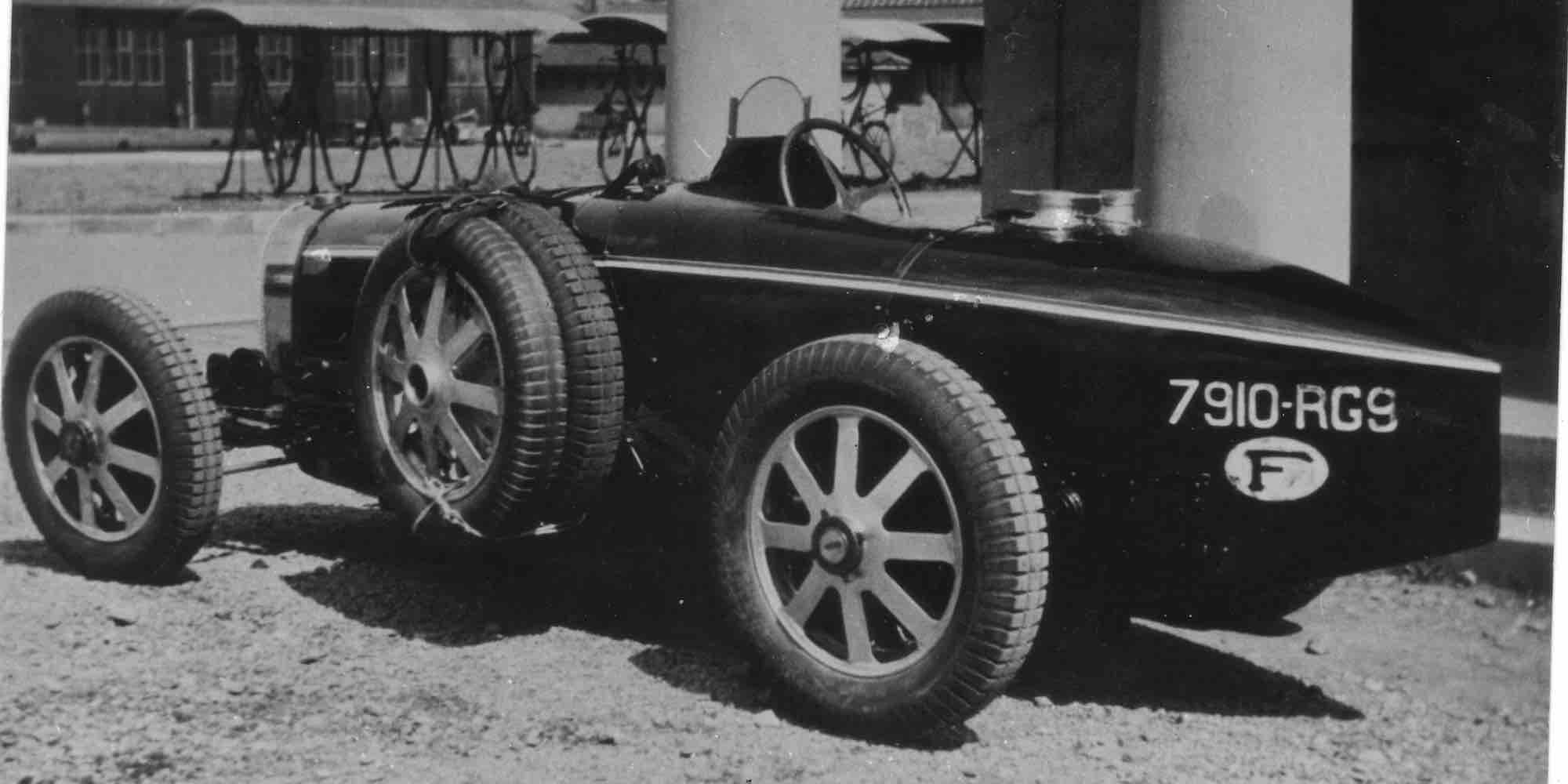 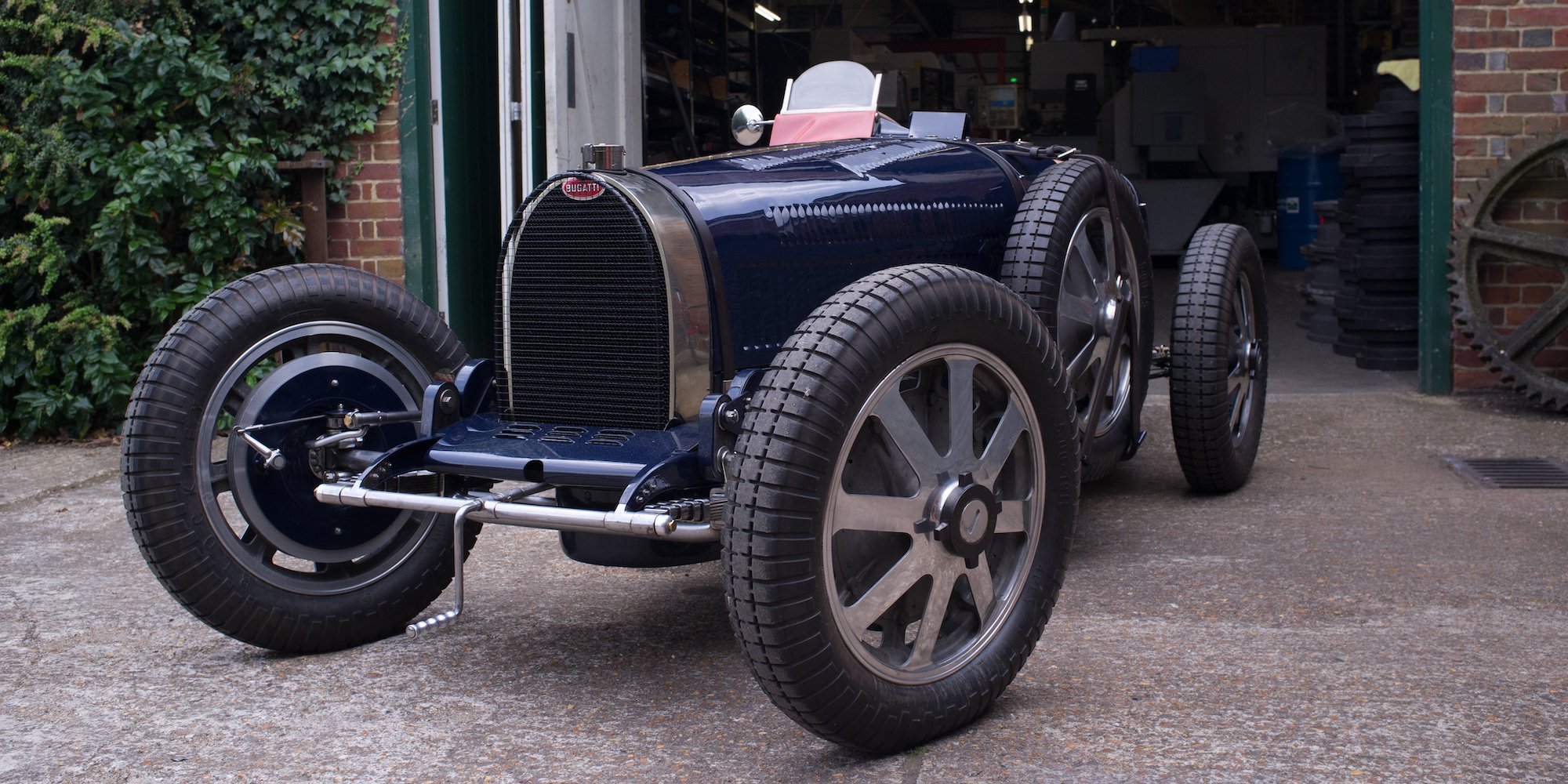 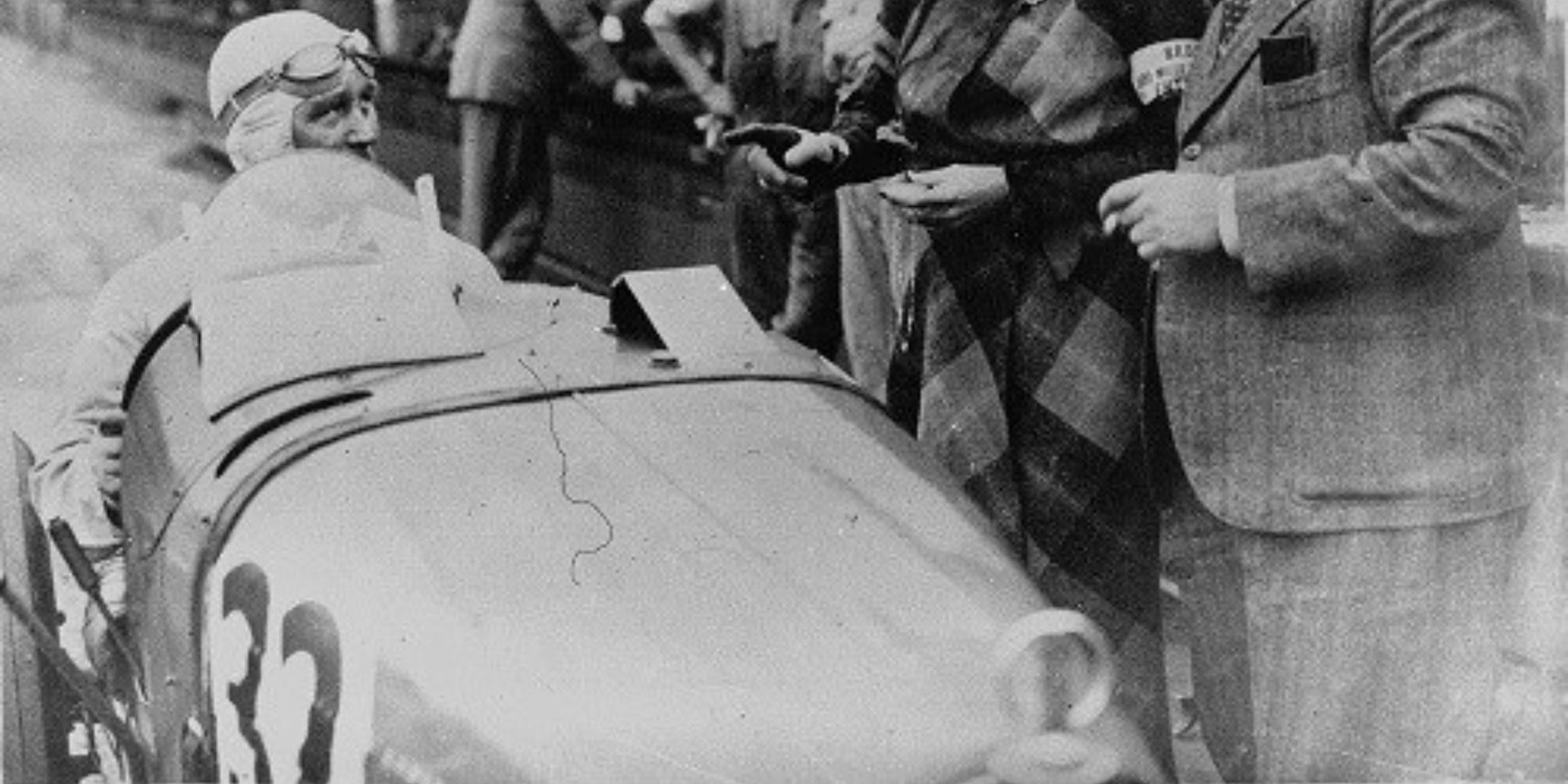 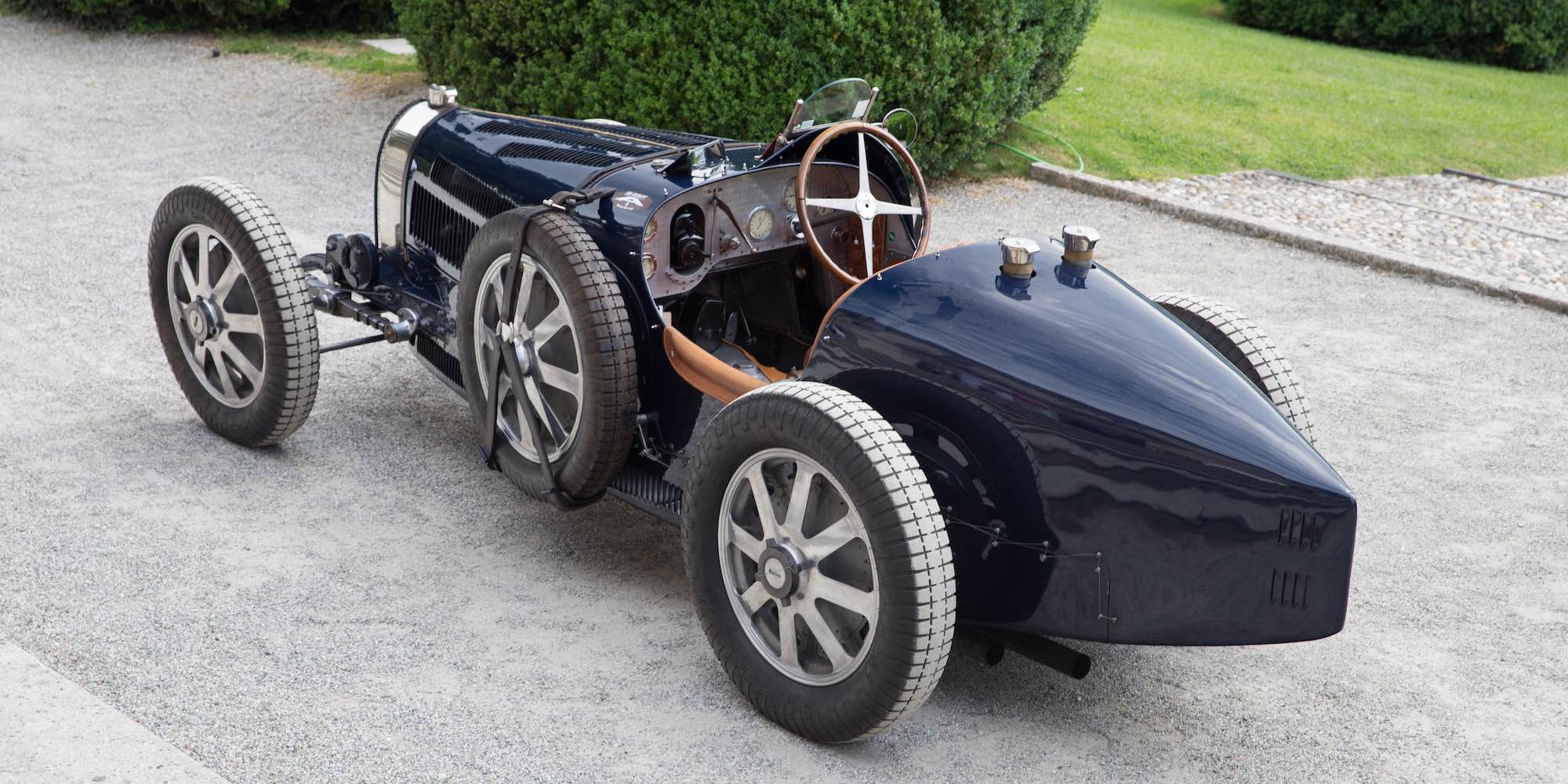 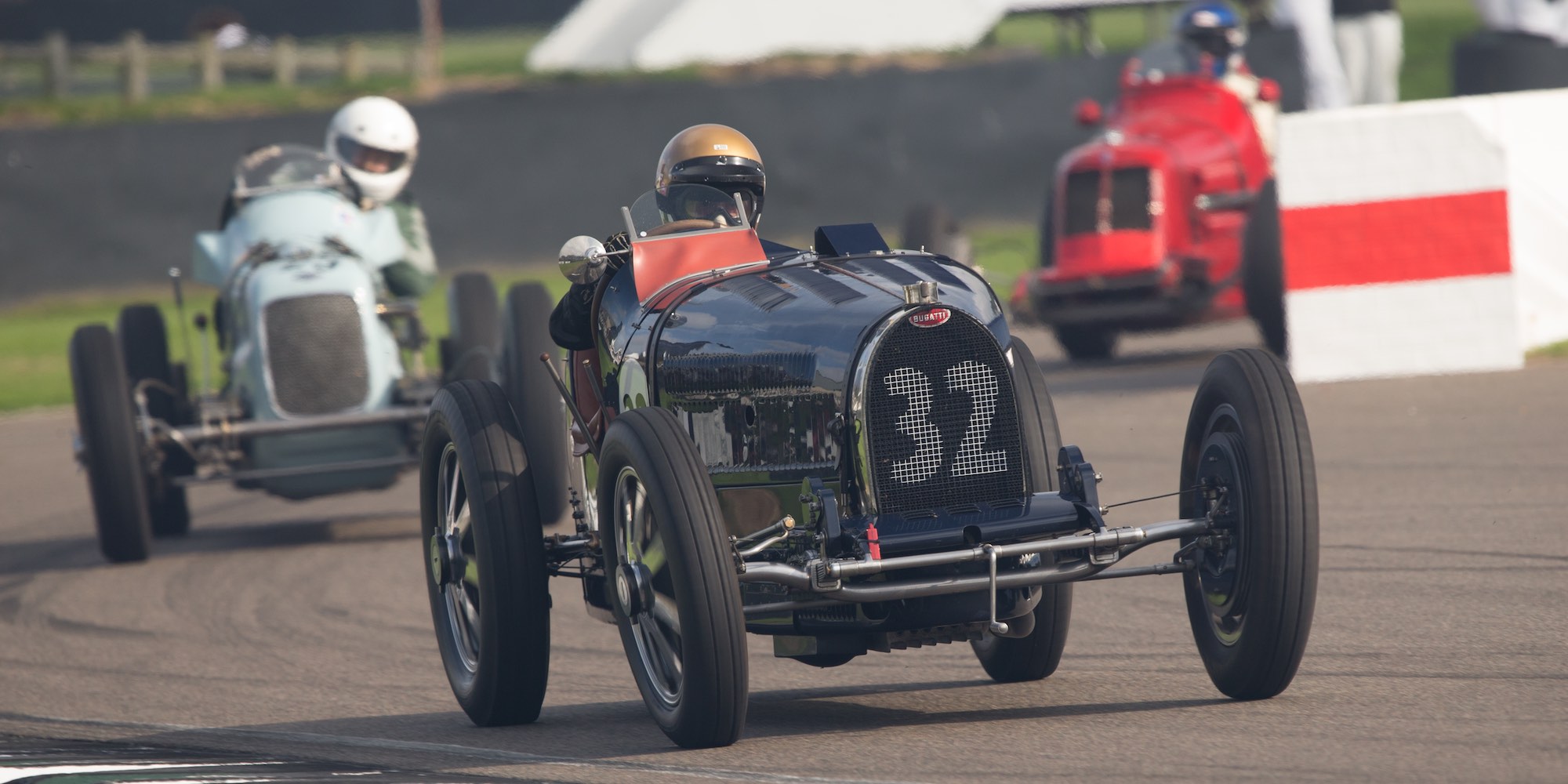 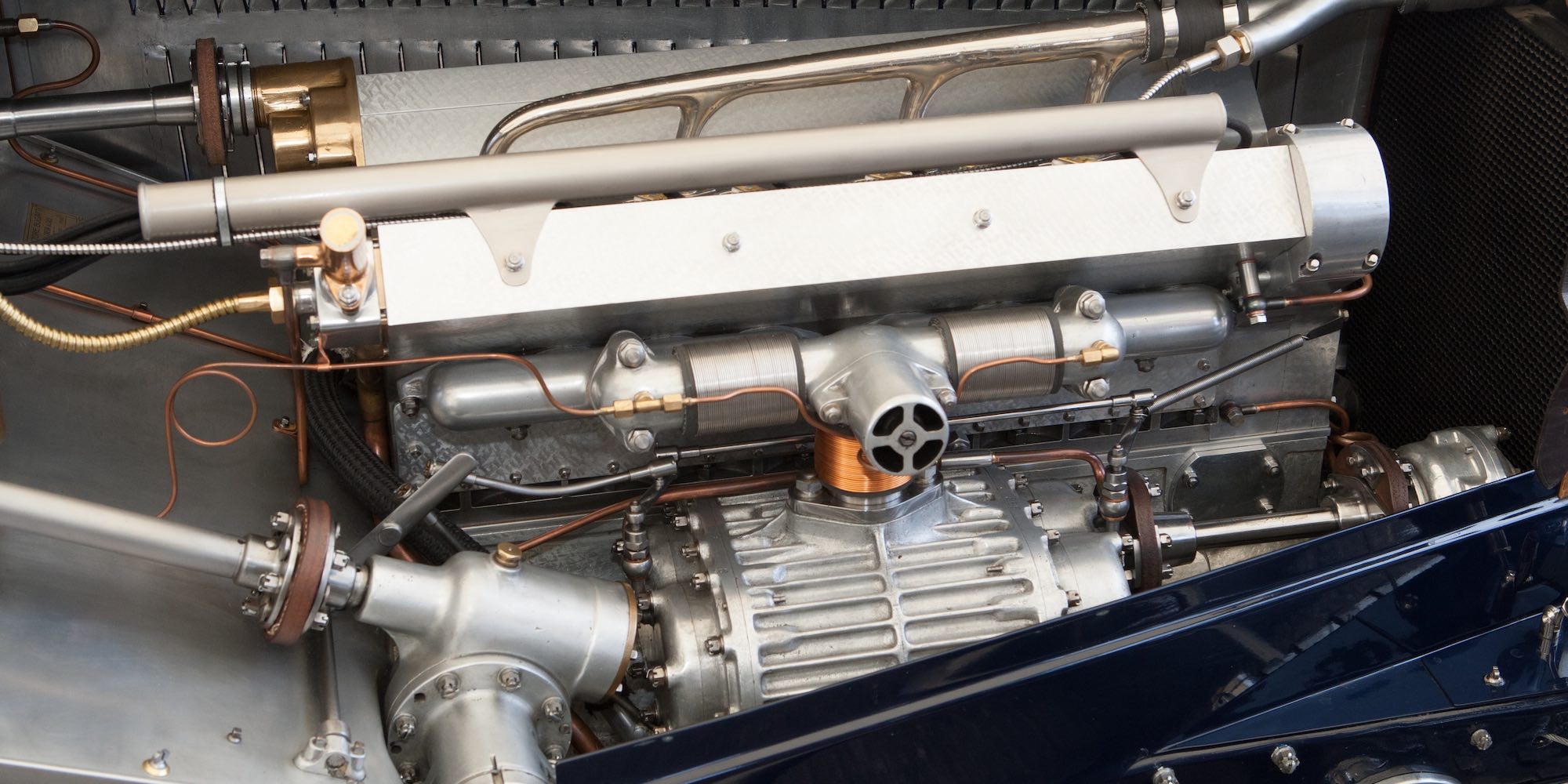 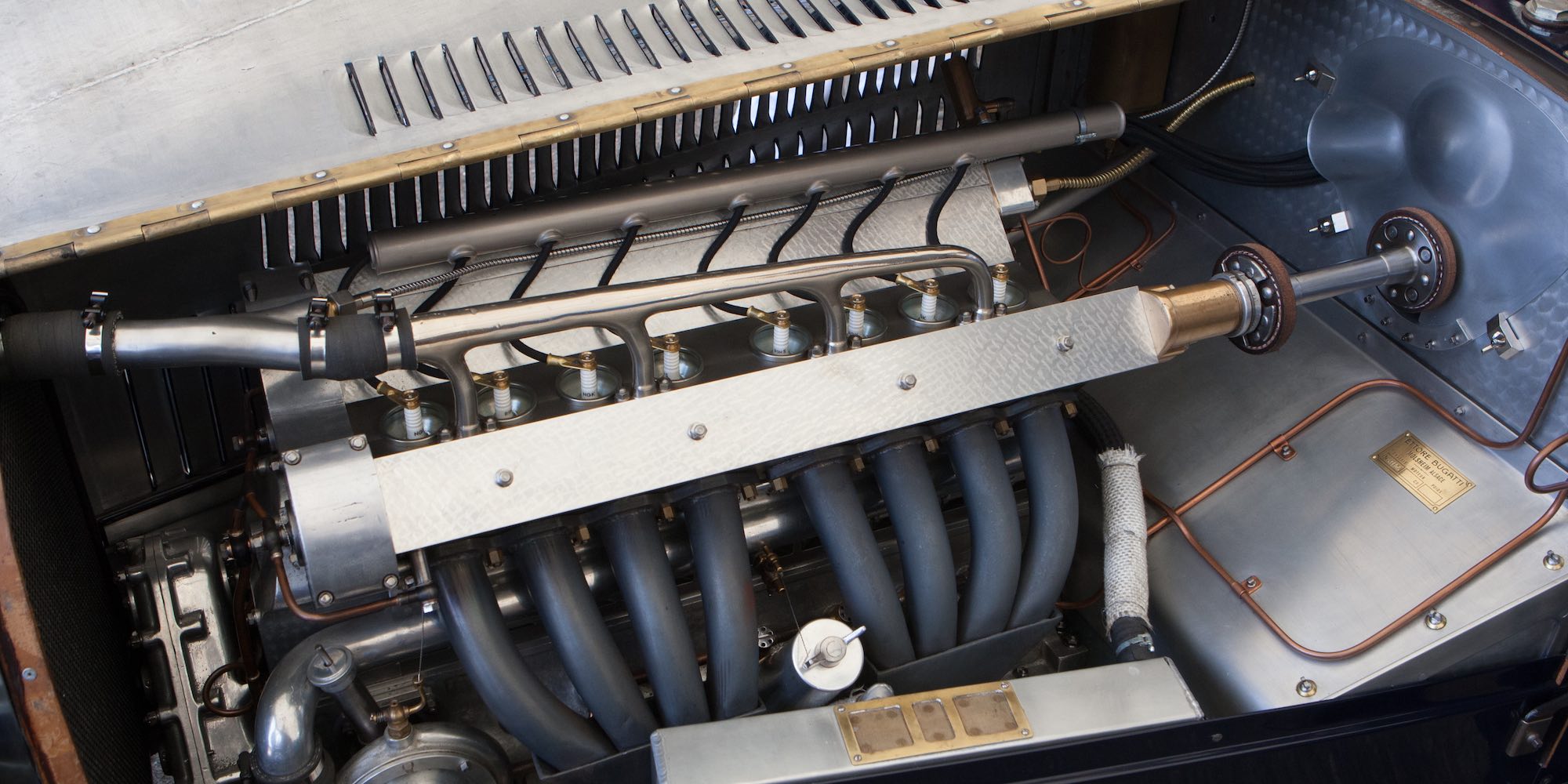 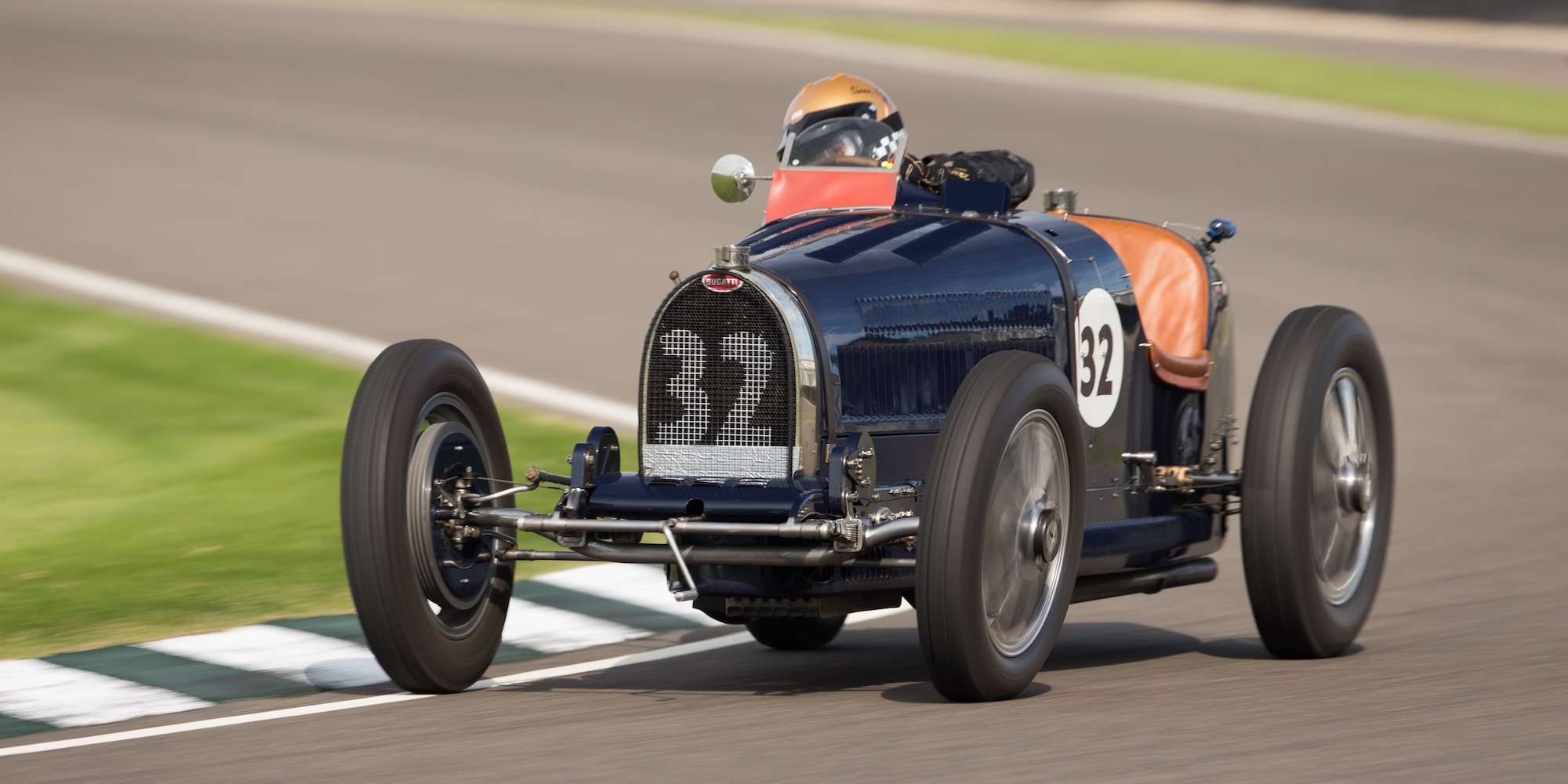 To the Bugatti aficionado the Type 51 has to be the ultimate Grand Prix Bugatti. It was was the final development of arguably the most successful Grand Prix car of all time, the Type 35. The straight 8 2.3-litre, twin-cam, supercharged engine resembles a piece of art as much as a racing engine. With that distinctive sound that you only get from an eight-cylinder Bugatti, their raw speed and legendary road holding, it is not difficult to see why they captivate peoples passion and hold their position at the pinnacle of motor racing history.

Launched at the Paris Salon in 1930 the Type 51 was the direct replacement for the Type 35B, the main improvement being the engine. The never ending quest for speed is at the heart of motor racing and the time had come to look beyond the single camshaft configuration of the Type 35B. The inspiration came not from Bugatti’s European competitors but from the powerful American Millers.

An engine from one of these cars was acquired and put on test at the Bugatti factory and it was not long before the new twin cam engine was born. The Type 51’s crankcase, roller bearing crank, connecting rods and pistons were unchanged from the Type 35B. The significant difference was in the block. The Type 51 has one piece block with an integral head and two individual valve ports per cylinder, twin overhead camshafts and a modified inlet manifold creating a significant improvement in horsepower over its predecessor.

The Type 51 was a success straight from the start winning on its fist ever outing and going on to take numerous illustrious victories including winning the Monaco Grand Prix in 1931 and 1933. Raced by some of the greatest names in pre-war racing like Achille Varzi, René Dreyfus and Louis Chiron, the Type 51 was the pinnacle of the Bugatti’s racing legacy.

Count Stanislaus Czaykowski was a Polish aristocrat born in the Hague and based in Paris. An accomplished gentleman racer, with an evident passion for Ettore Bugatti’s fabulous cars he raced and owned a number of Bugatti from 1929 until his untimely death in 1933.

Buying his first Bugatti a Type 37A in 1929, he competed in the popular Voiturette class before buying the Type 35C chassis 4957 in August 1930 from the famous Nice based Bugatti concessionaire Ernest Fredrich. Having family still down in the south of France Czaykowski clearly had a strong relationship with Fredrich and the factory as in 1931 works mechanic, Jean Georgenthum was recruited, with the blessing of the Patron, to become the Count’s team’s number one mechanic.

Dissatisfied finishing a “lowly” 9th at the April 19, 1931 Monaco Grand Prix in his Type 35B Bugatti and impressed by the faster factory Type 51s, Count Czaykowski promptly ordered one through Ernest Friderich, taking delivery April 27, 1931.  This was the first delivery of a Type 51 to a private driver on the Continent. Only Lord Howe in the UK received an earlier one. Czaykowski went on to race 51126 with immediate success as highlighted on the next page. Winning the Casablancan Grand Prix in May, he went to take the podium three time leaving famous Bugati driver René Dreyfus to drive 51126 to victory in the Grand Prix de Brignoles on the 17th of September.

(Note: Dreyfus was one of the most famous and highly regarded Bugatti drivers during this period. In 1938, he was named Champion of France.)

Success continued on into 1932 with the Count regularly entering two cars per meeting, the 51 in the unlimited class and the Type 35C in the 2-litre class. He also drove 51126 in the jewel of the racing crown, the Monaco Grand Prix.

At the Grand Prix de Comminges on the 14th of August 1932, Czaykowski was left with the dilemma of which car to drive as both the unlimited and the 2-litre class were run together. He opted for the 2-litre class which he duly won. However according to photographs and as described in the detailed article about this car in Bugantics by Terry Cardy, Pierre-Yves Laugier, Sandy Leith and Charles Howard, it shows that he was not driving the 35C but 51126 in 2-litre configuration. As they go on to mention this also ties in with the Motor Sport report of the race which says he was driving a “special double camshaft Bugatti carefully prepared for the race by veteran driver Friderich”.

It is not known whether Czaykowski used the bottom end of the engine from the Type 35C or had a spare 2-litre crank assembly to make the conversion. What is clear from period photos and film footage is that it was 51126 he drove in 2 litre configuration for the BRDC 500-mile Race at Brooklands just over a month later.

For the start of the 1933 season it appears that 51126 was running again in its original 2.3-litre configuration. 1933 also saw a new car for Czaykowski the fearsome Type 54. This and Le Mans, in the Type 35, seems to have become the early focus returning to Grand Prix racing in July in 51126, now back in its 2-litre configuration once again.

Very sadly on 10th September 1933, Czaykowski was killed in his Type 54 Bugatti at Monza.

After his death 51126 returned to the Bugatti factory to be sold on behalf of his widow. This is how it passed into the ownership of well known British enthusiast and Brooklands racer Aubrey Esson-Scott. Starting in a Brescia Bugatti before progressing to a Type 35 (a car we have recently sold). Having sold the Type 35 he contacted the Bugatti factory looking for a competitive car for the 2-litre class at the JCC International Trophy at Brooklands on the 28th of April 1934. The car can be seen above outside the factory awaiting his collection painted in black while still retaining the pinstripes down the side that Czaykowski painted during his latter year with the car. It also has two spare wheels for the drive home. According to the current owner it was sold with the bonnet from Czaykowski’s Type 35C as well as the back axle fitted both of these features have been retained to this day.

Making the race, he went on to win the team prize along with Earl Howe and Tim Rose-Richards also in their Bugattis. Aubrey continued to campaign 51126 sometimes with, and sometimes without, the supercharger through to 1937. In 1936 unable to compete with the 2-litre ERAs he converted the engine to 1.5-litre. For the 1937 season he fitted a single seater body to the car, clearly retaining the original GP body and bulkhead as in November 1937 it was sold to Harry Soutar apparently back in its 2-seat Grand Prix configuration,

In February 1954 51126 was purchased D.F. Mallalieu who is recorded racing the car on numerous occasions throughout his ownership, both in the UK and subsequently in America when he moved there in late 1958 taking 51126 with him.

51126 was shipped to the UK to renown marque specialists Crosthwaite and Gardiner in the 1980’s where it remained until 2006 when the complete and sympathetic restoration back to its exact 1932 Brooklands BRDC 500-mile Race specification was undertaken (bar the addition of an original Bugatti starter motor). The owner recalls that when 51126 first arrived at Crosthwaite and Gardiner Aubrey Esson-Scott got into his E Type with his chauffeur and went to Buxted to see his old car, spending time with John Gardiner pointing out all of his details on the car.

With regard to the bodywork, the tail and bonnet have remained with the car since its ownership by Czaykowski. During the restoration the original uniquely modified scuttle was purchased from Terry Cardy and was more recently refitted to the car.

The stunning restoration was completed in 2014 and is a credit to all involved. Once finished 51126 returned to competition in the capable hands of Simon Diffey. From 2014 to 2017 51126 was raced at Goodwood every year as well as taking an impressive 4th and 3rd place in the prestigious Williams Trophy, run by Crosthwaite and Gardiner on every occasion. In 2018 well known Bugatti racer and restorer Charles Knill-Jones drove 51126 to 1st place in the 10th Bugatti Grand Prix at Lime Rock Park in the USA.

51126 has been maintained by Crosthwaite & Gardiner since their 2014 restoration.

Since then, 51126 has been shown at the 2017 Villa d’Este making it the first Grand Prix Bugatti to be invited to do so. At the 2020 Amelia Island concours it was awarded Best in Class of the Prewar Racing Car Class. 51126 also took Best in Show at the 2019 Camden Foreign Car Show.

The chance to own a Grand Prix Bugatti this complete and original does not come about very often, let alone a Type 51 with such a well known and prominent history as 51126. As such this represents a truly exciting opportunity to become the first new owner in 60 years of quite literally one of the finest examples of Bugattis legendary Type 51 you will ever have the opportunity to own.