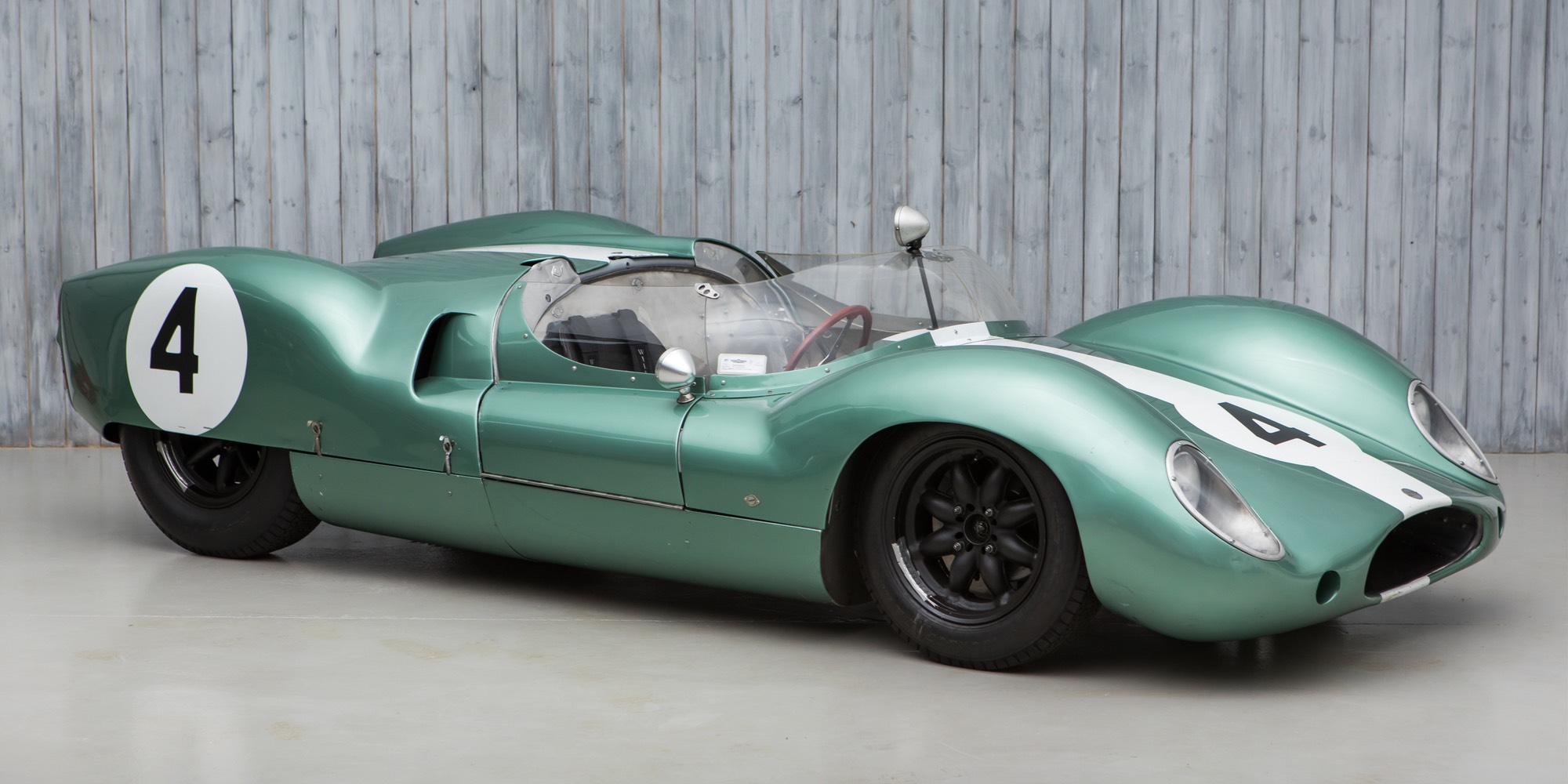 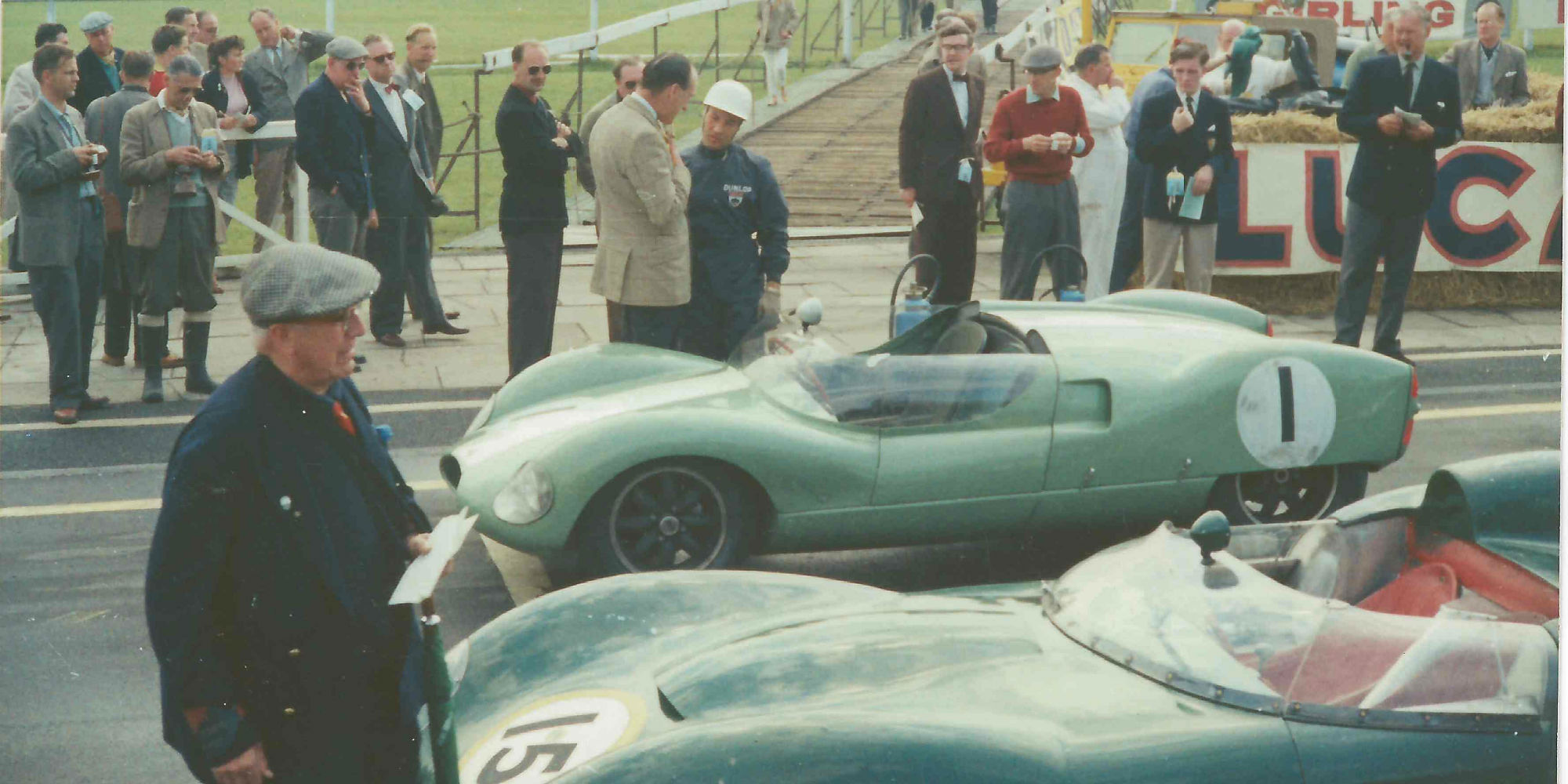 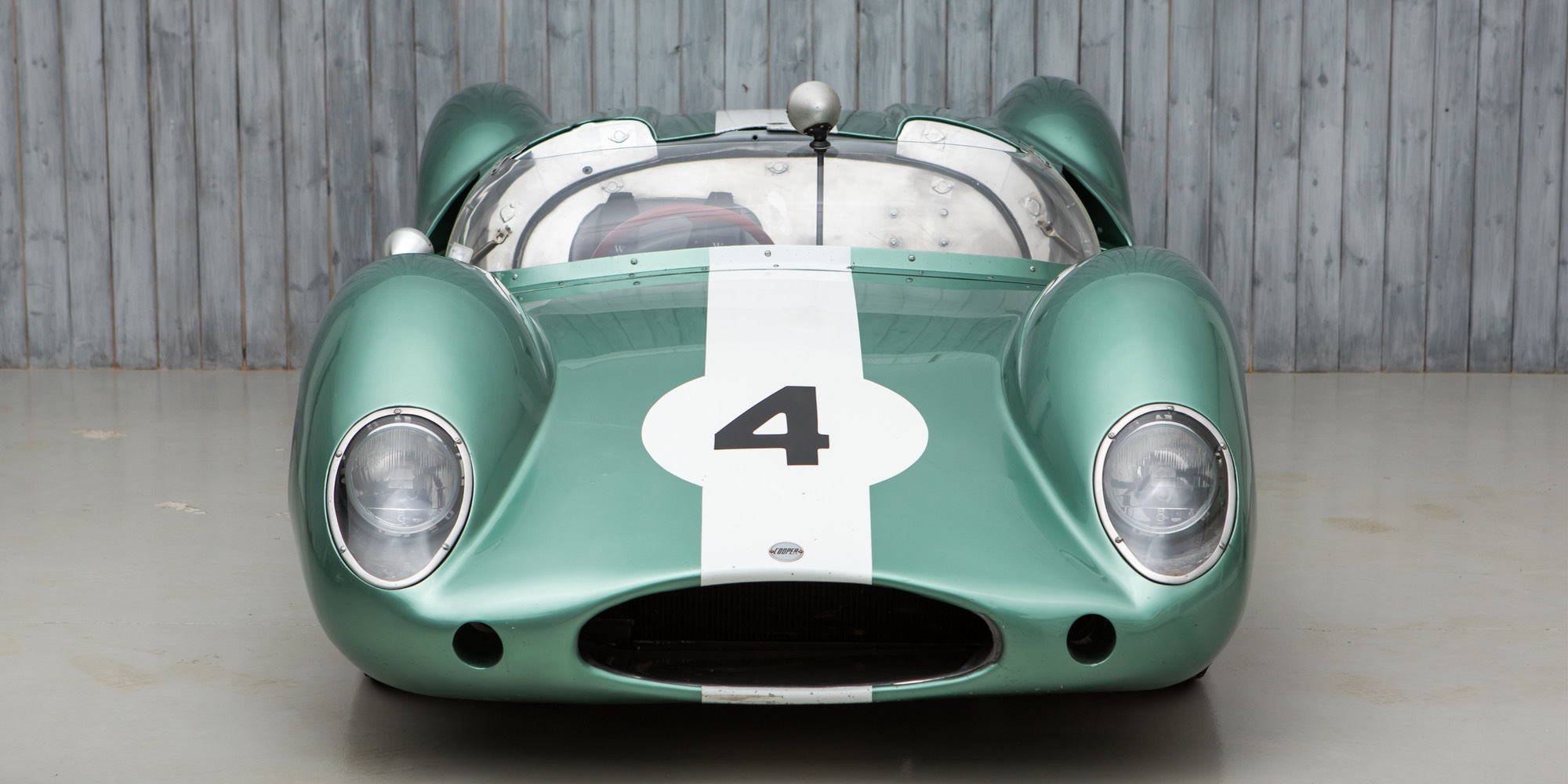 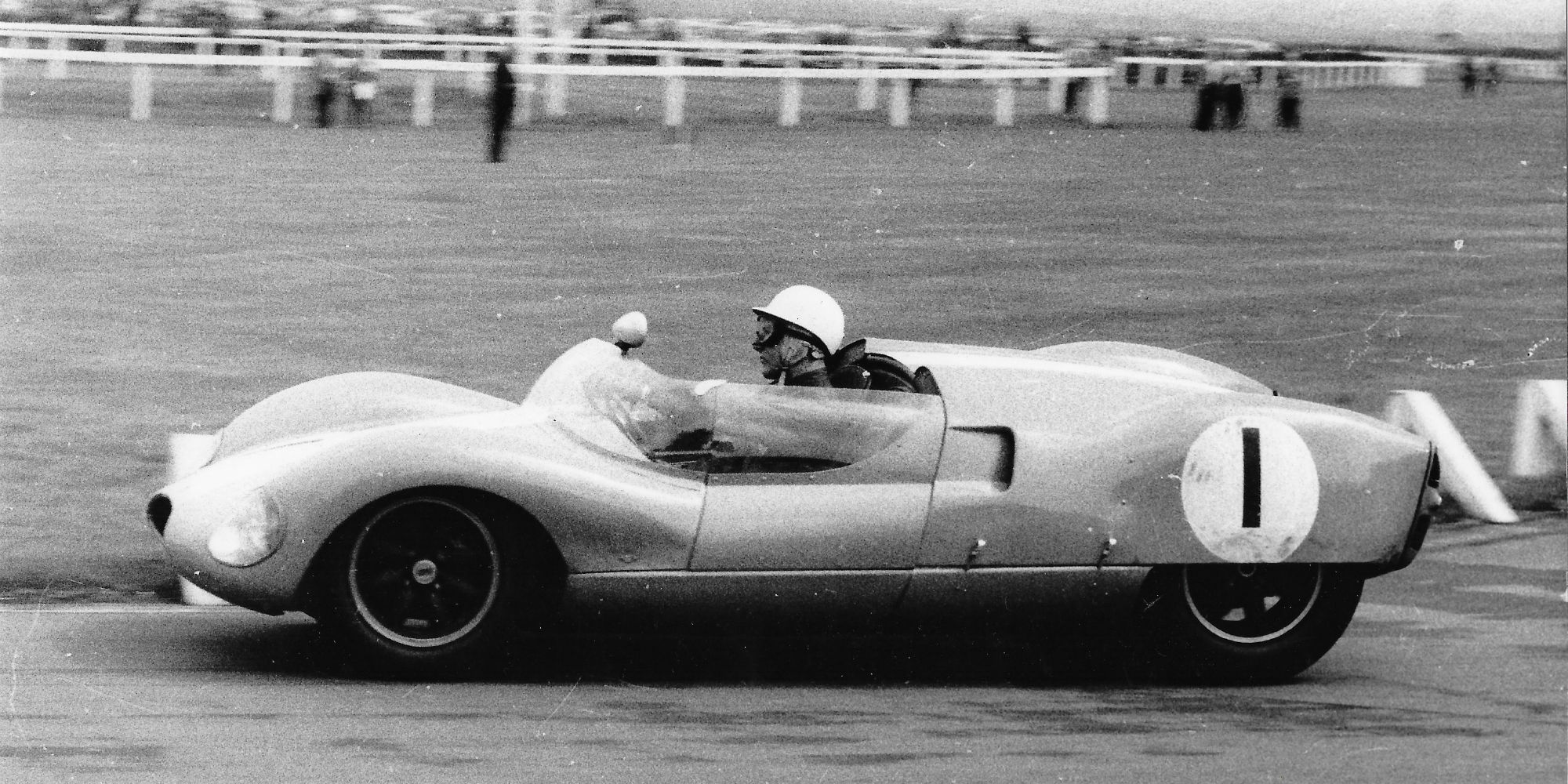 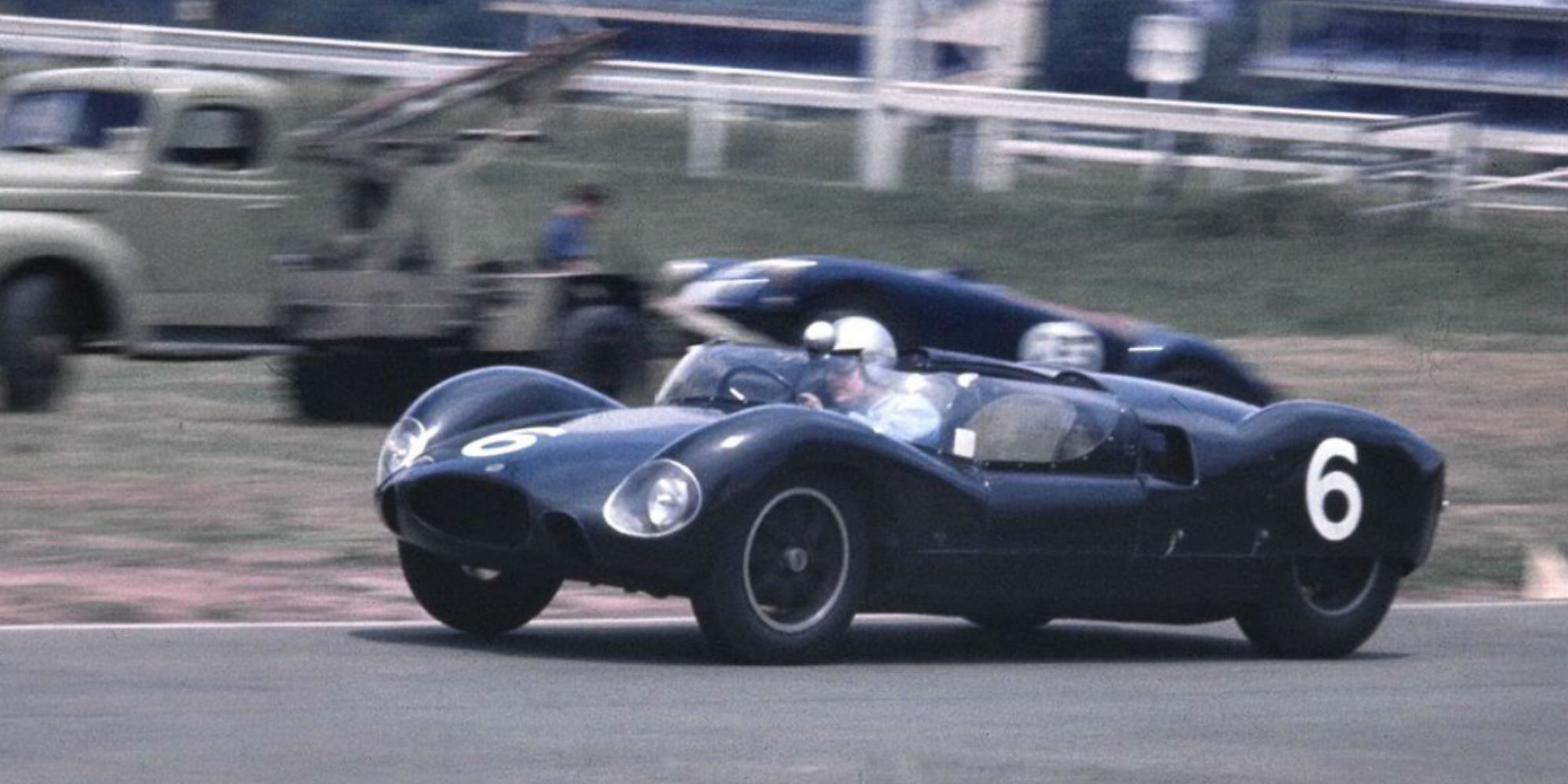 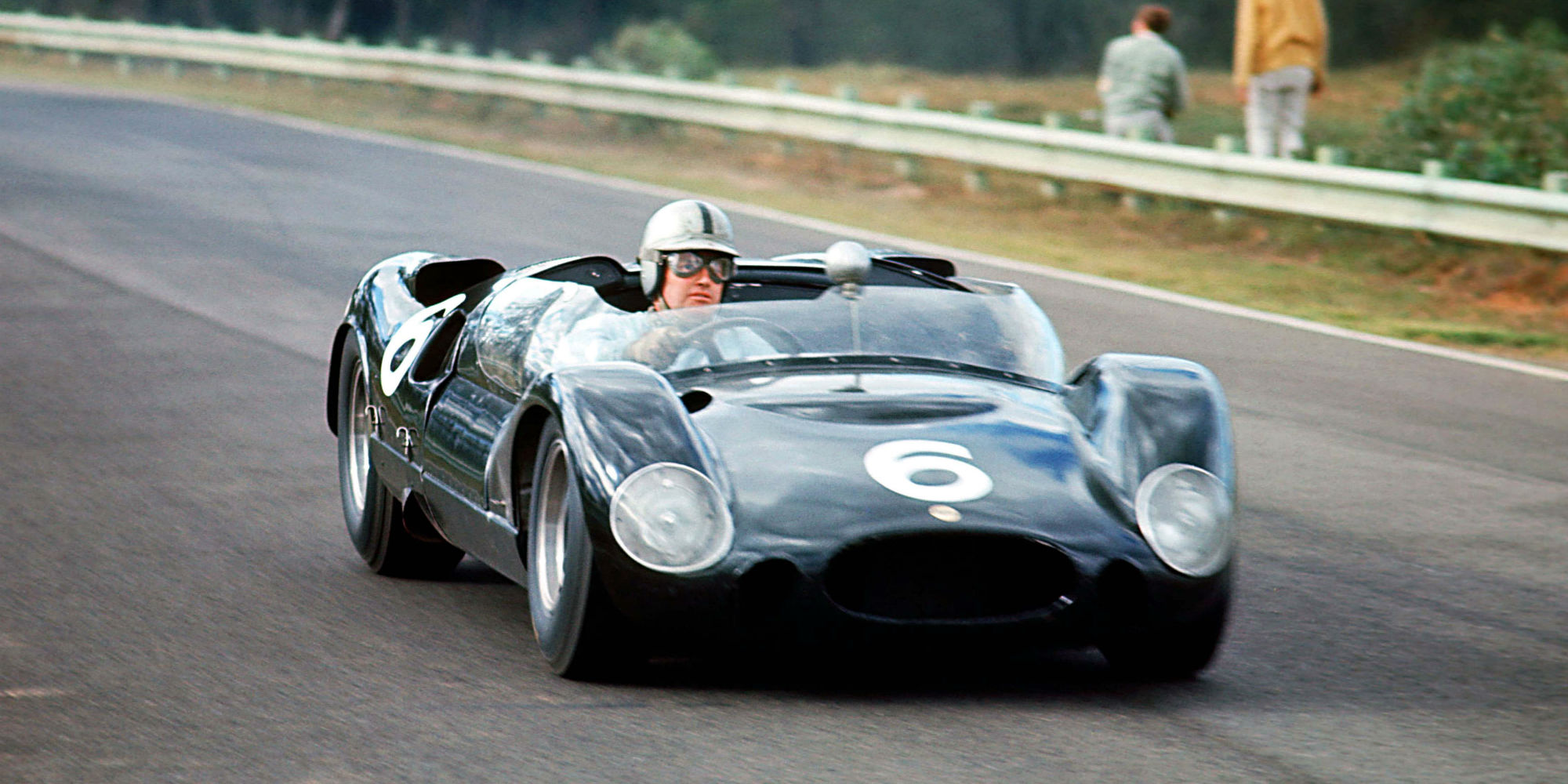 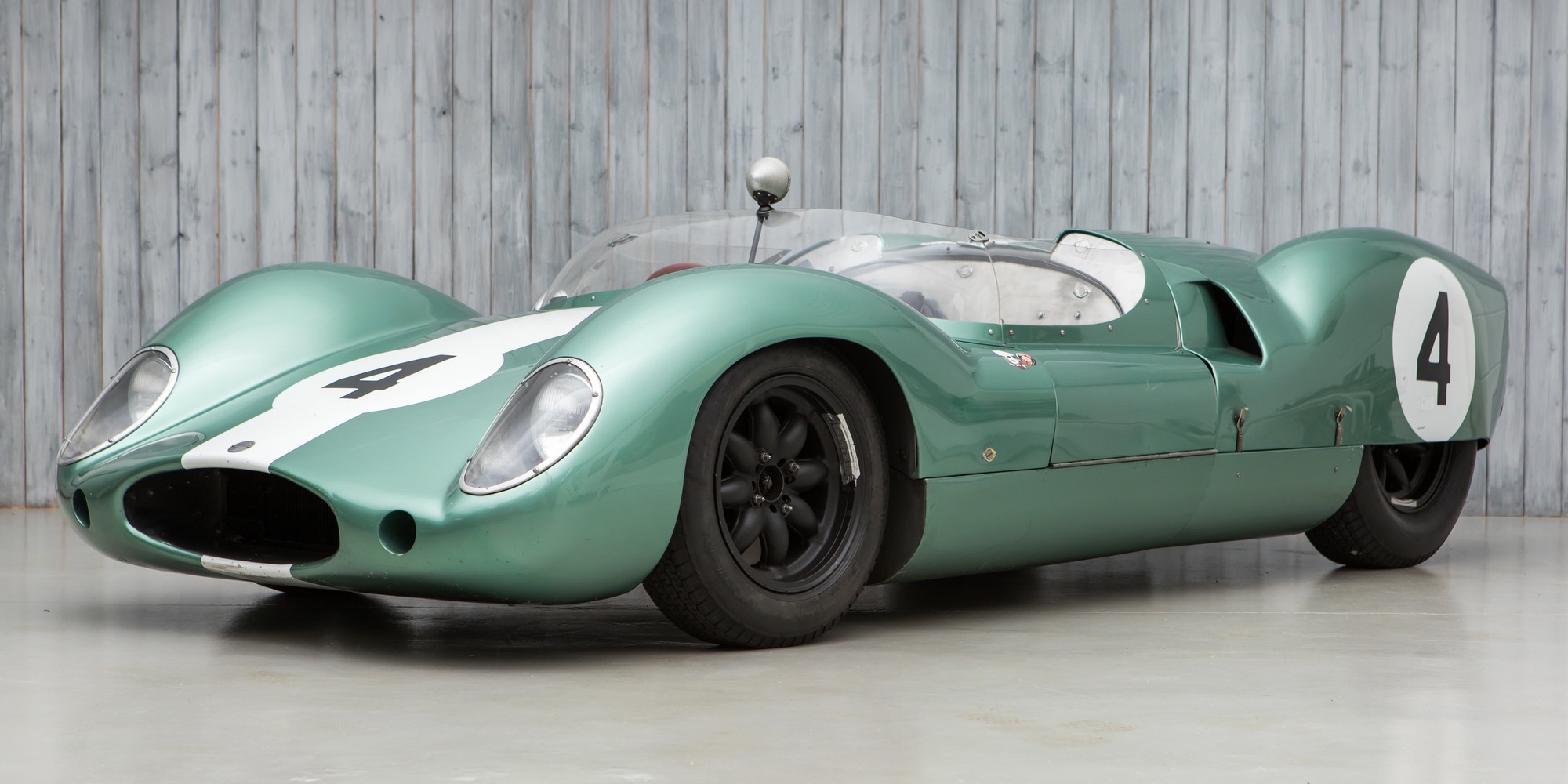 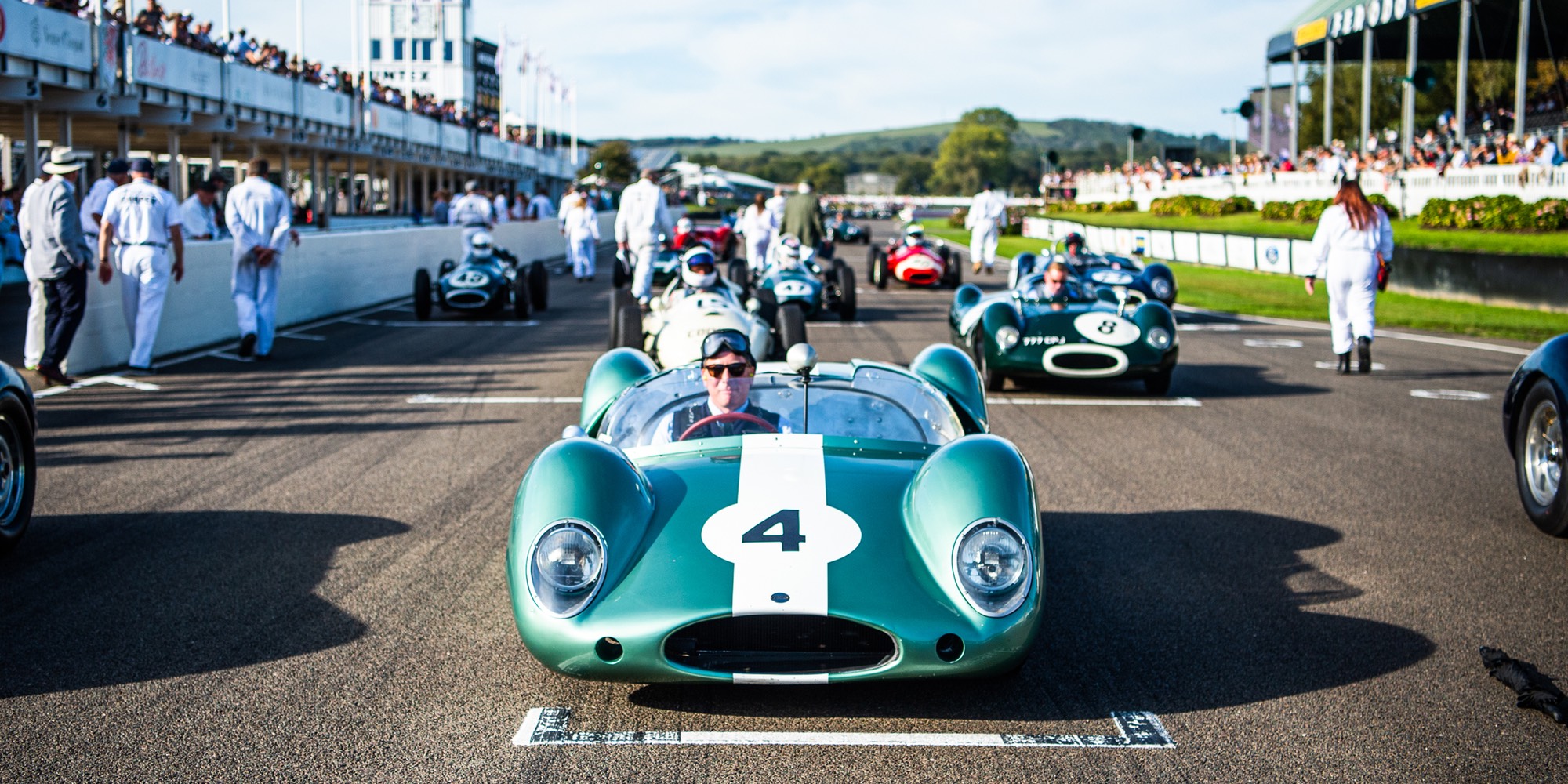 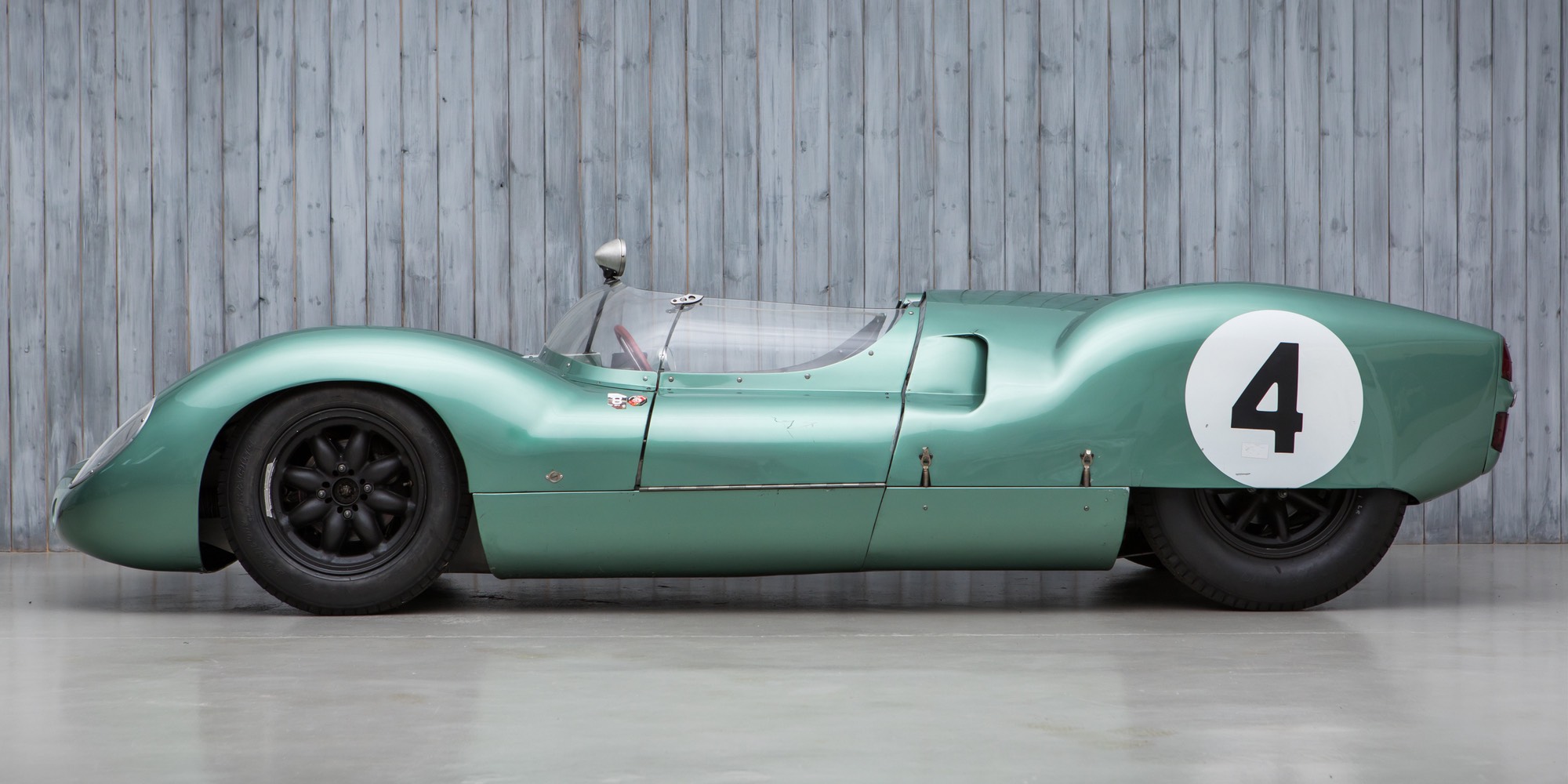 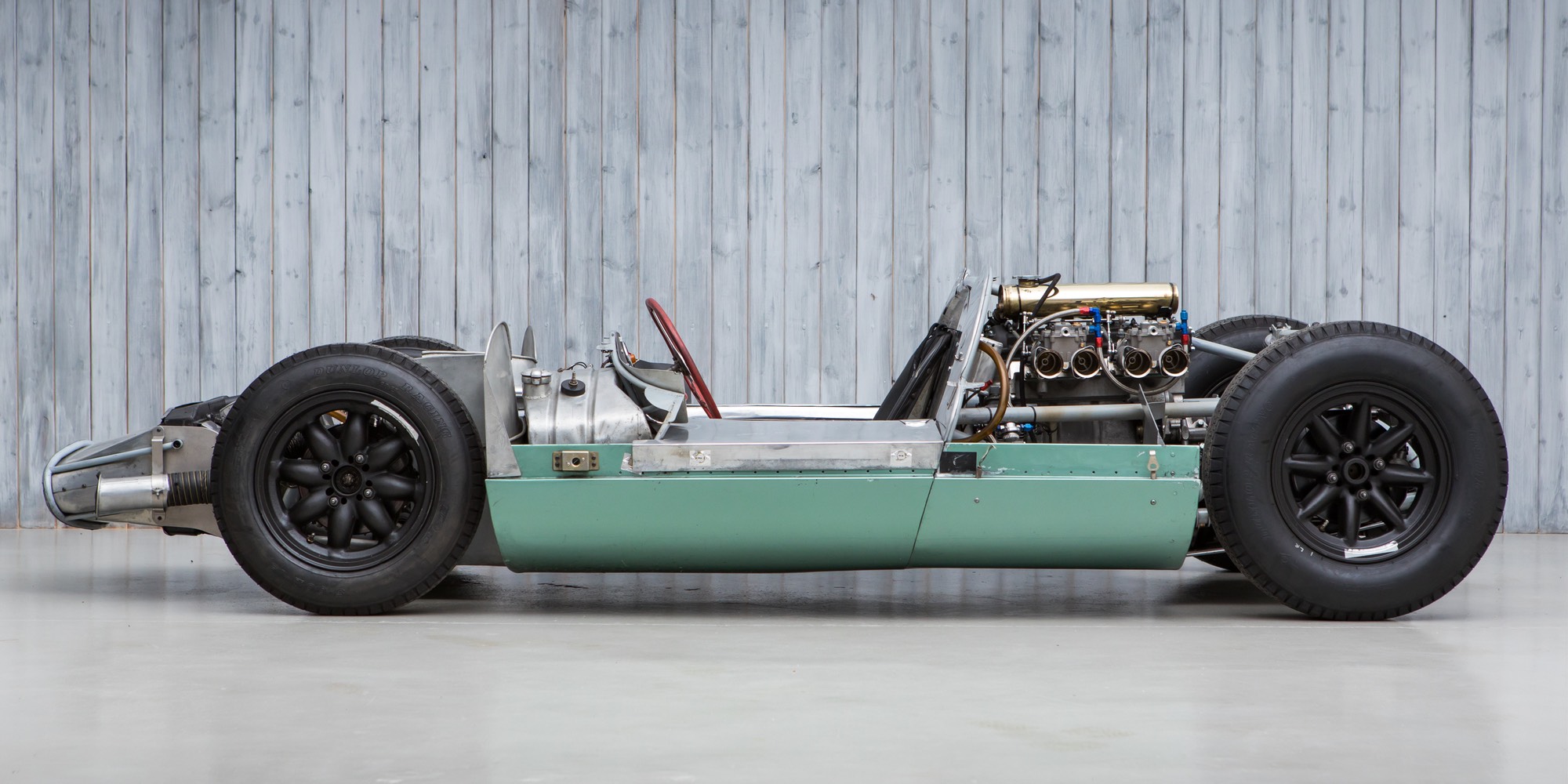 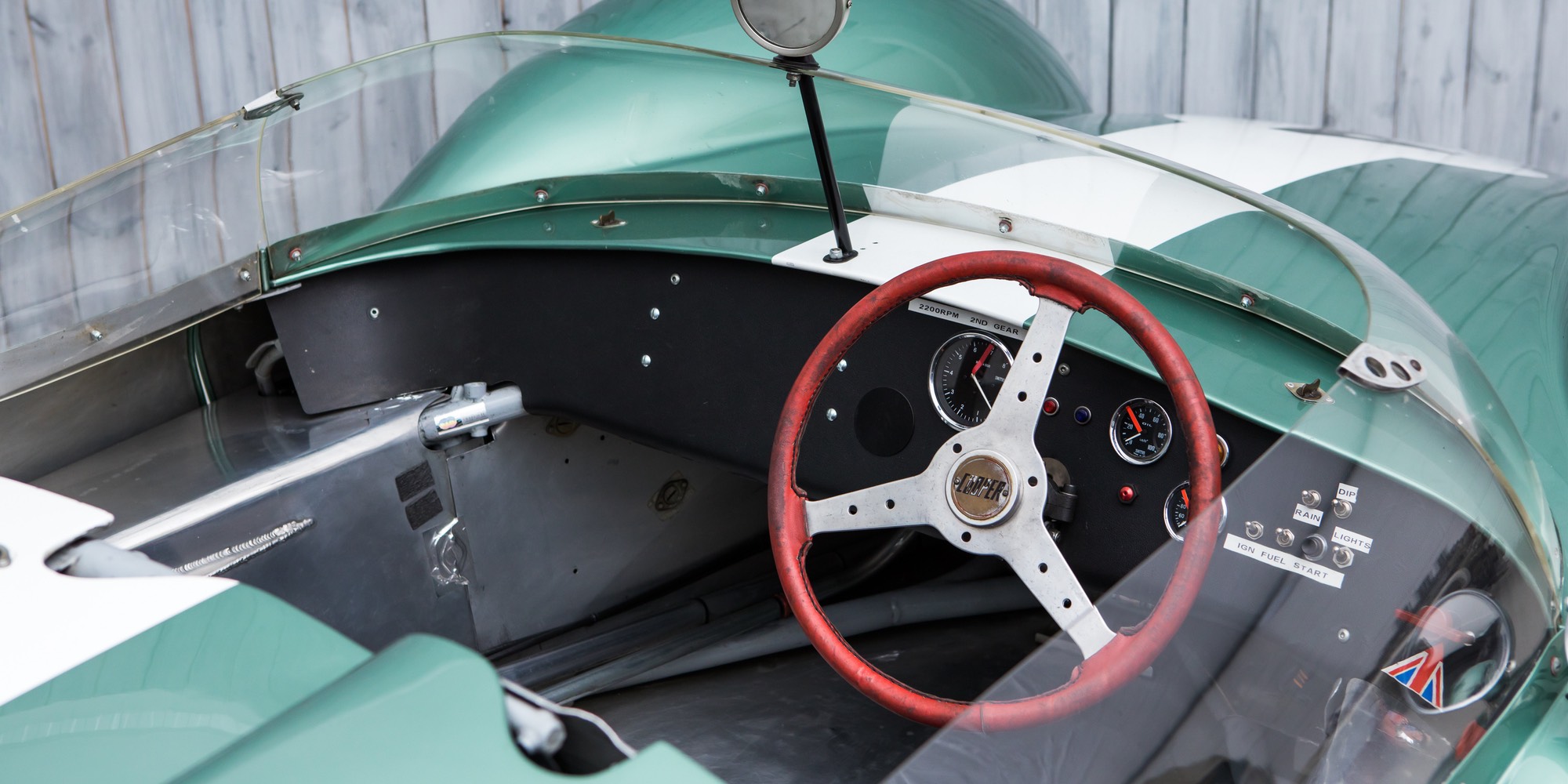 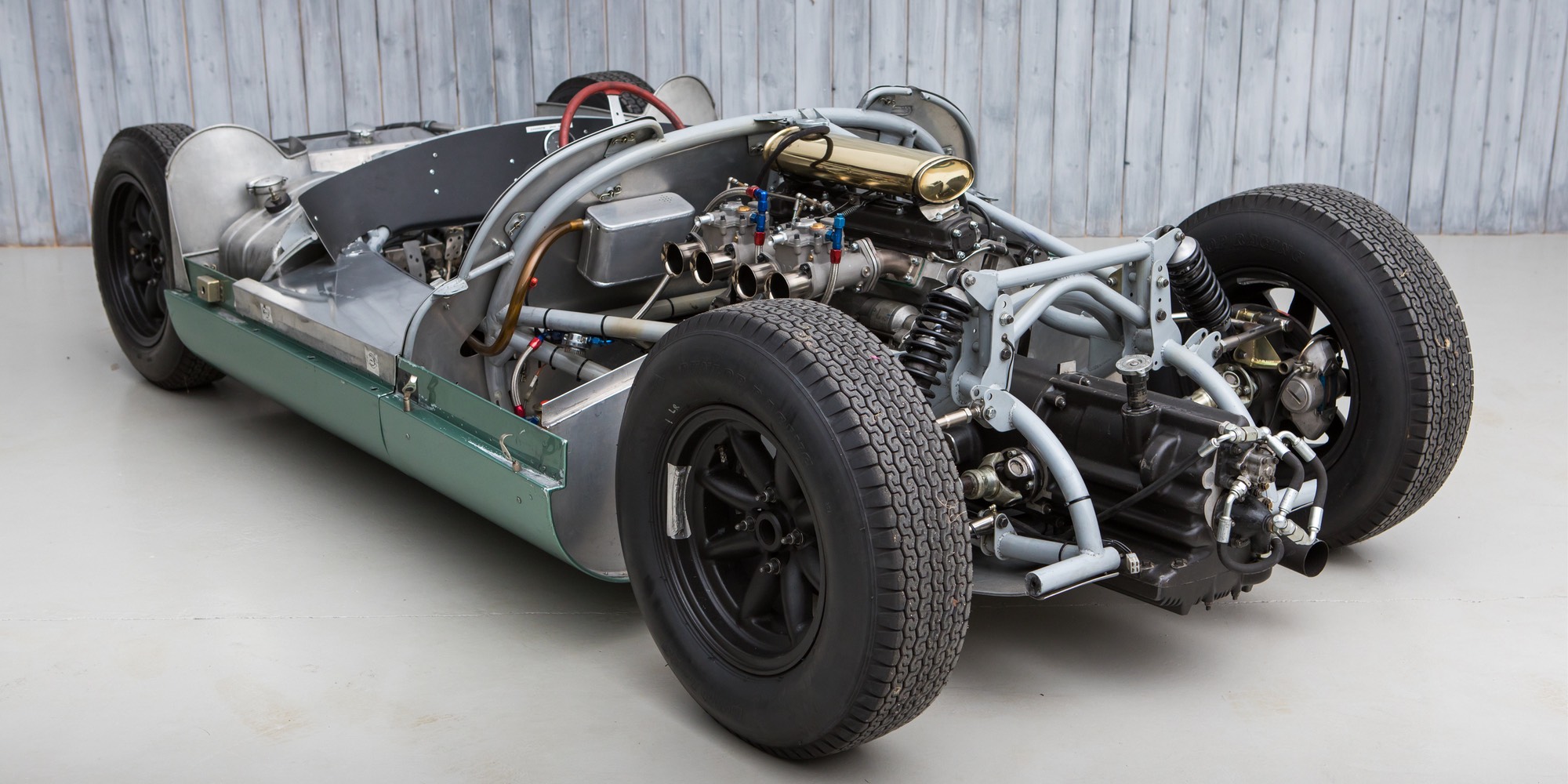 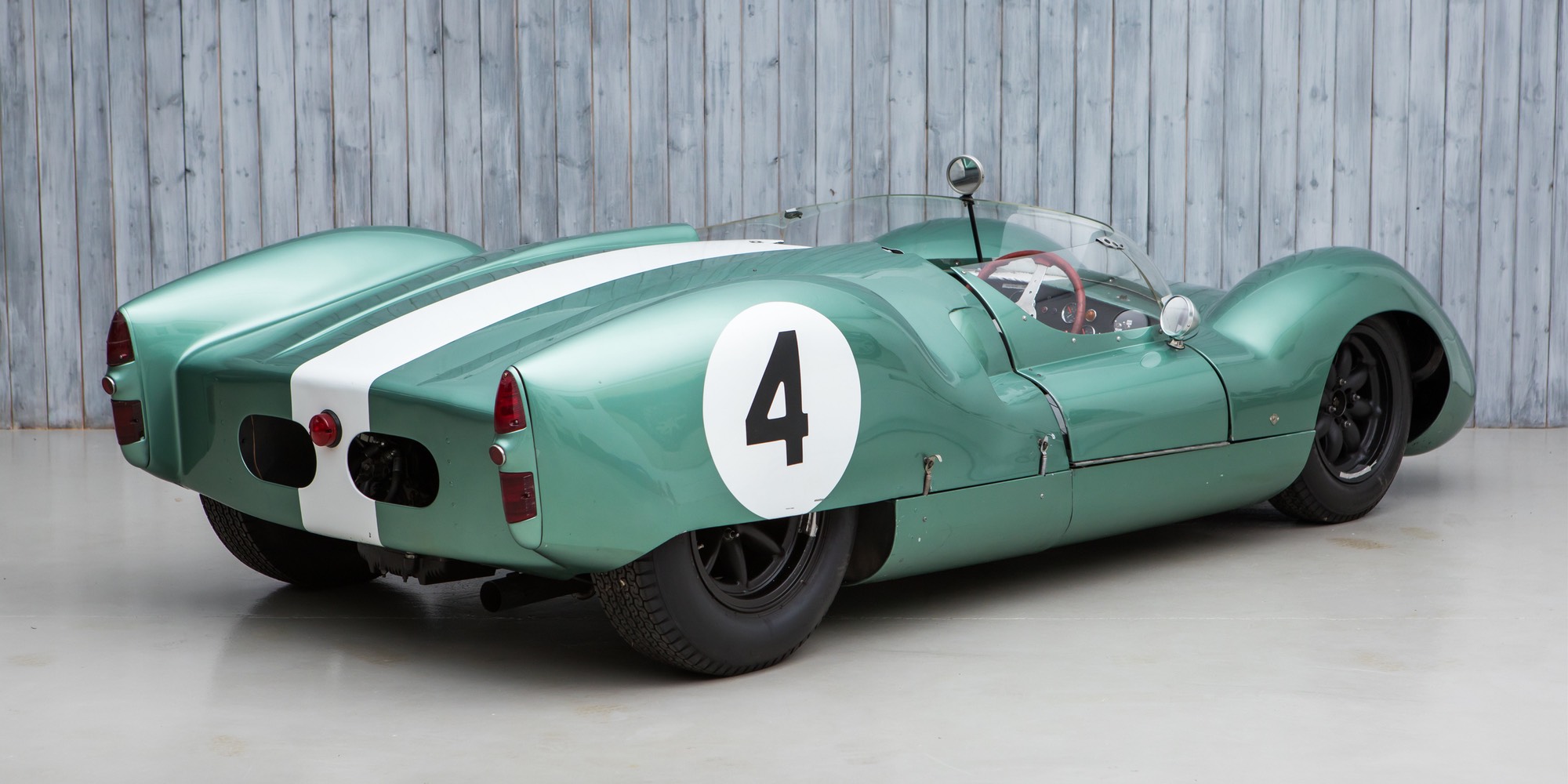 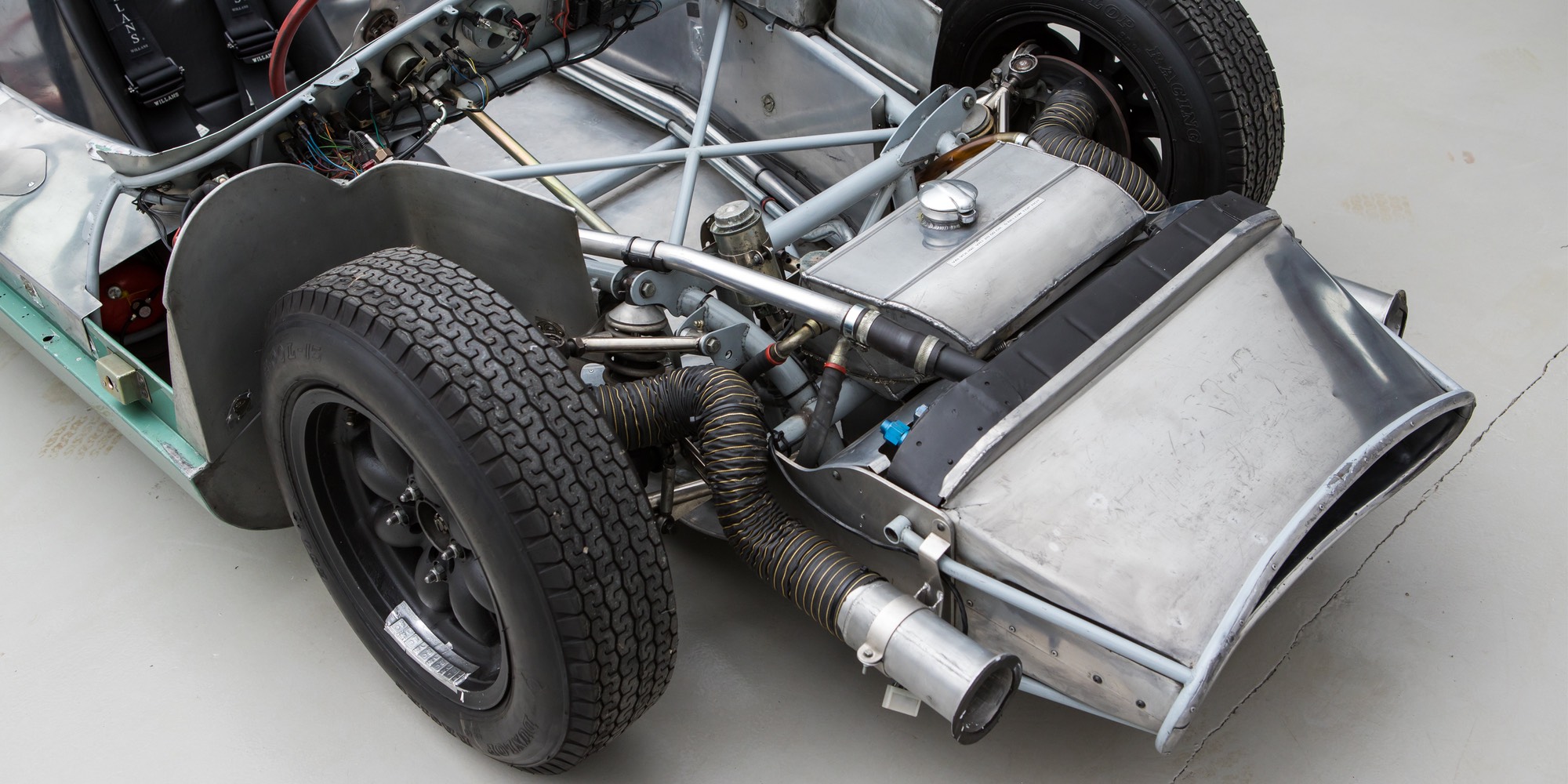 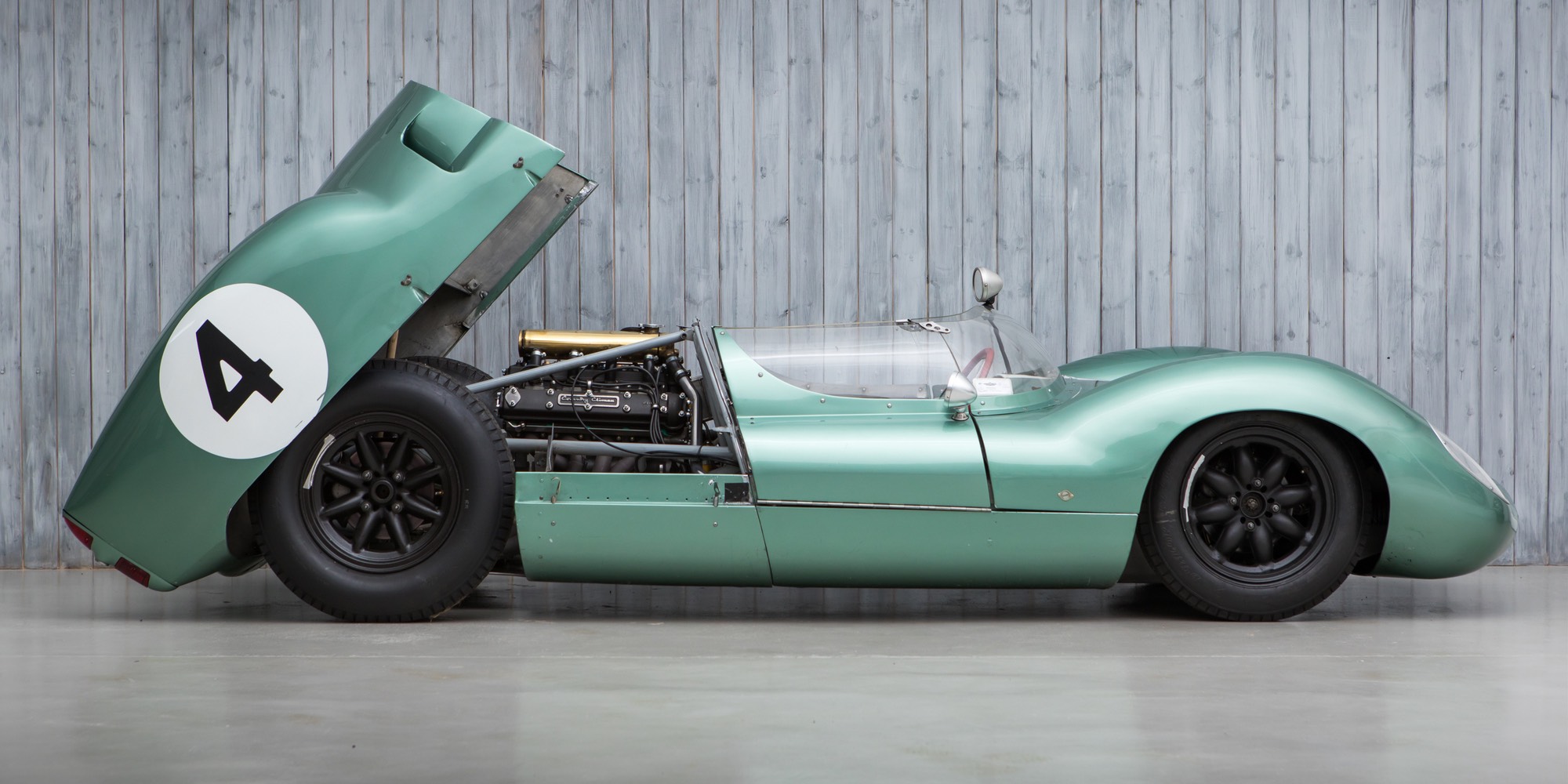 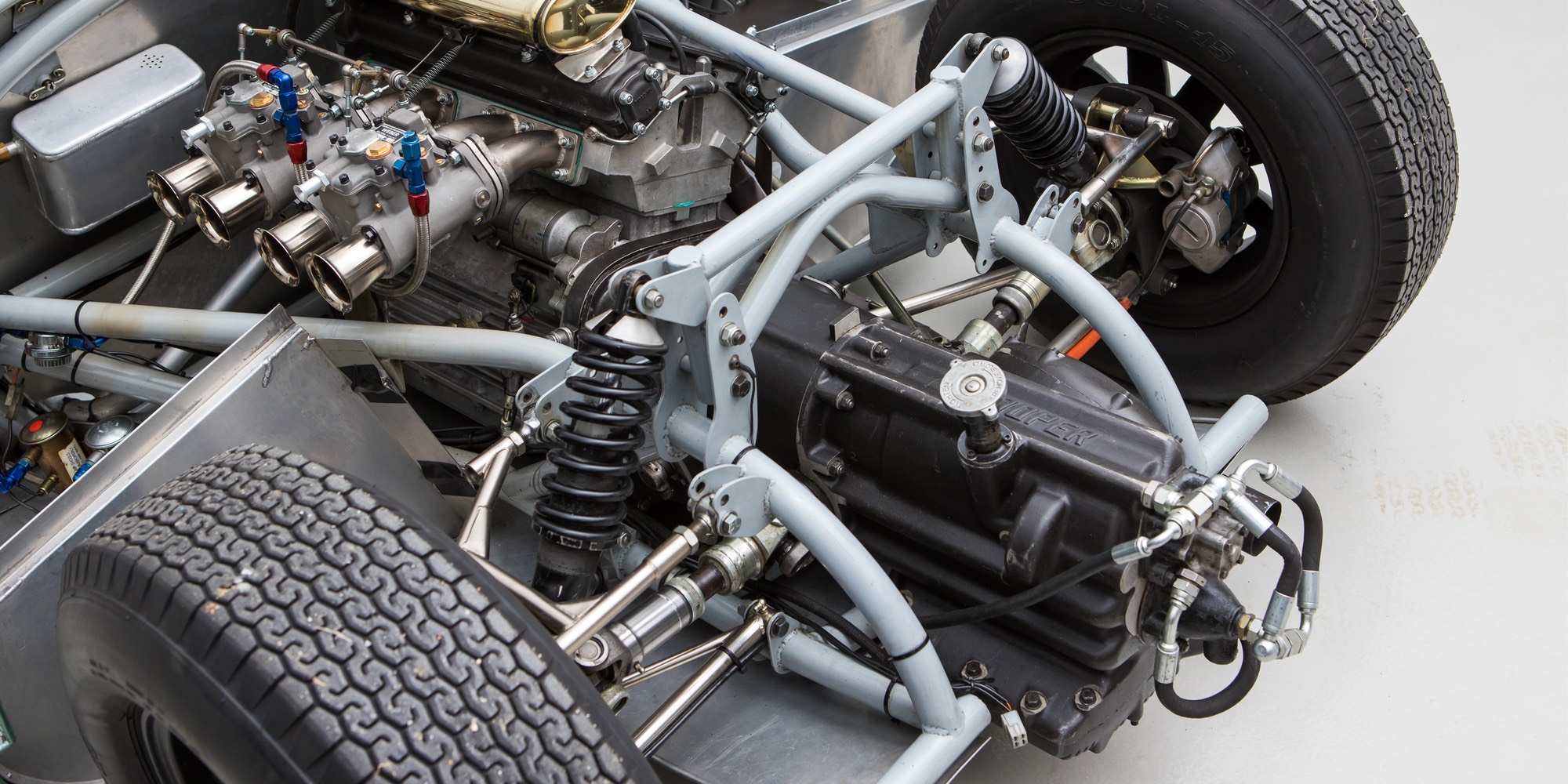 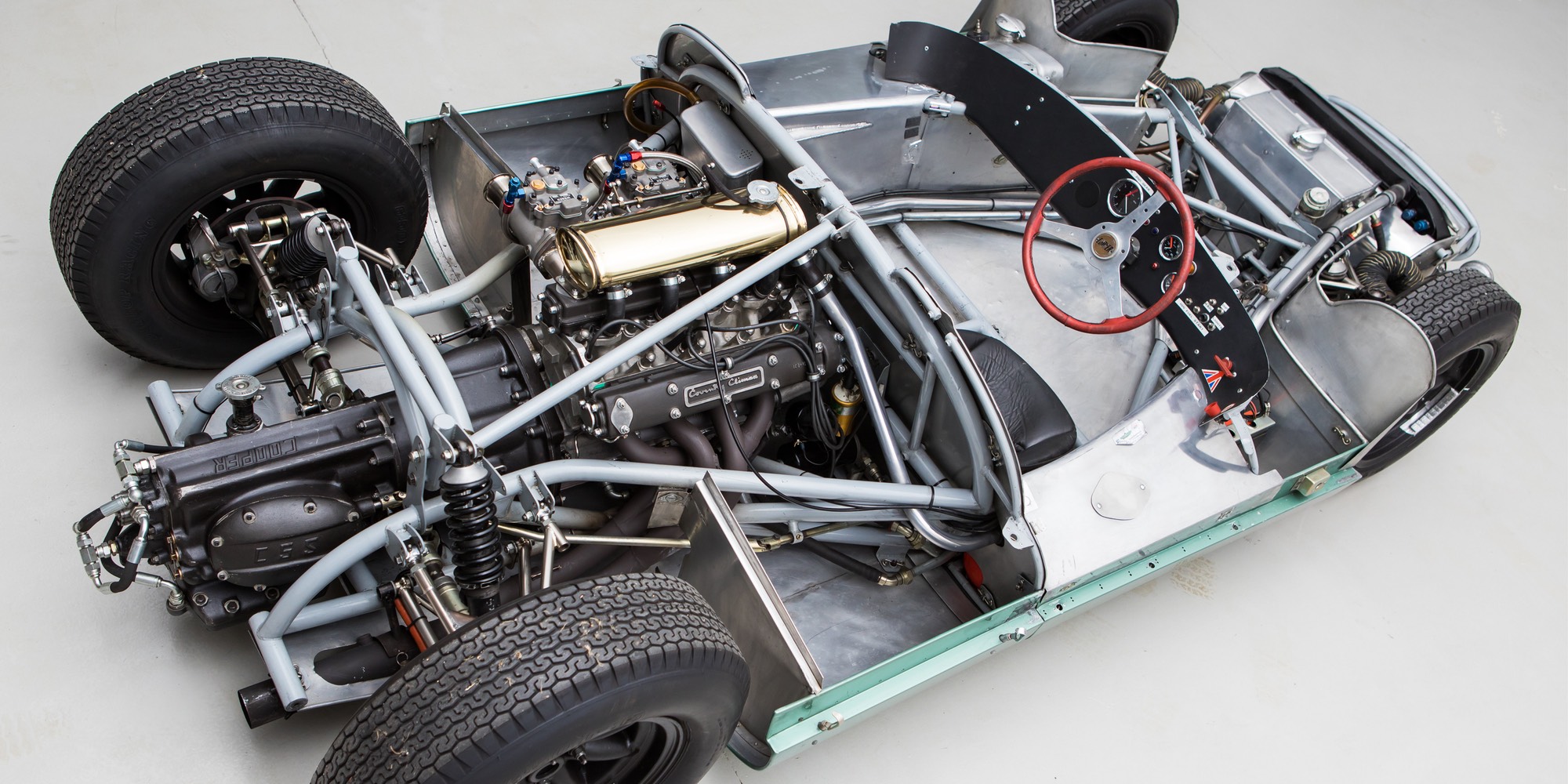 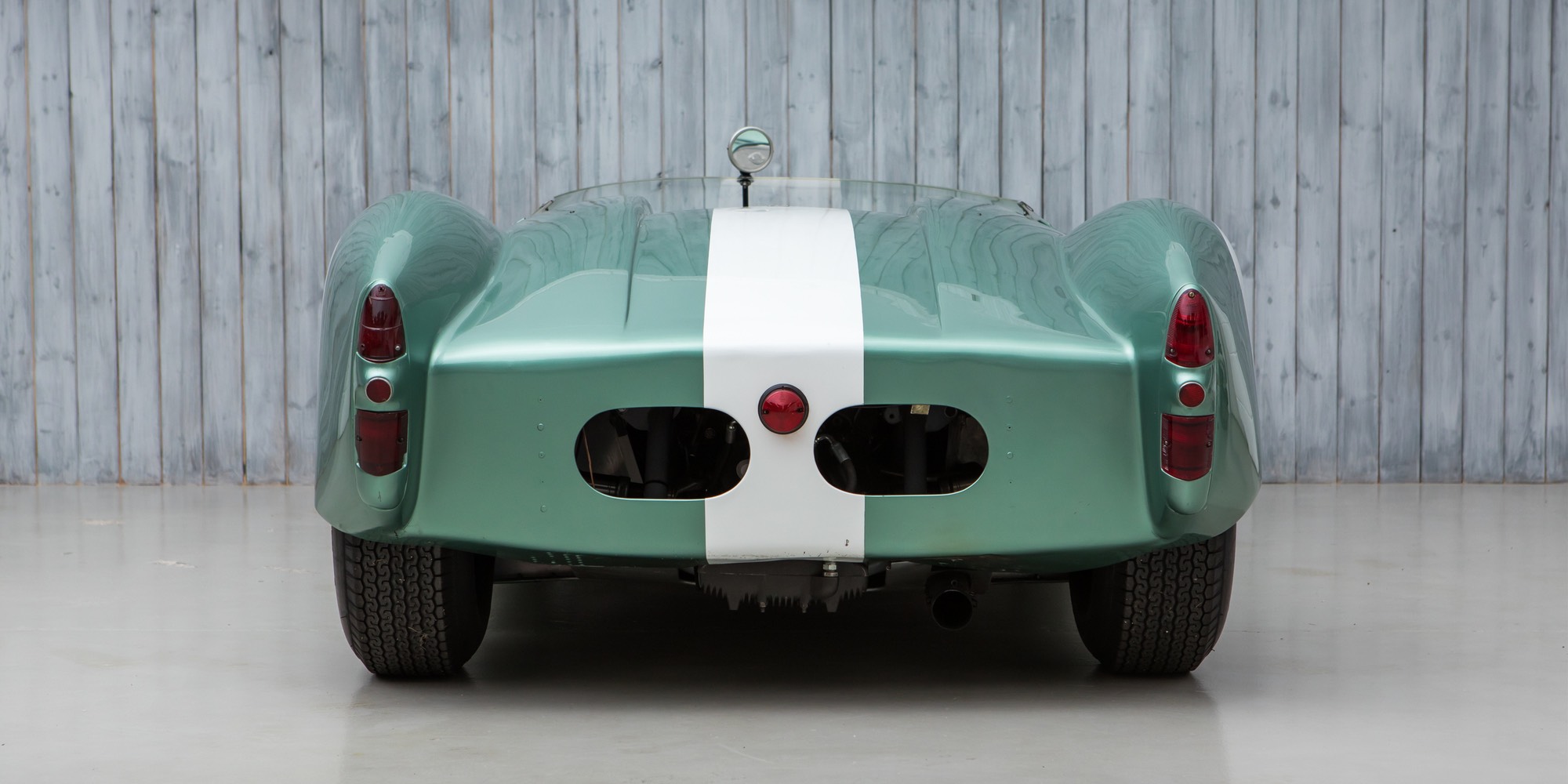 To many the 1950’s is still the most evocative era of sportscar racing. Le Mans at its heyday, the Mille Miglia, names like Moss, Hawthorn, Fangio and the start of transition of power from the big manufacturers like Jaguar and Ferrari to the more bespoke race car manufacturers like Cooper and Lotus.

Colin Chapman and Lotus often get the credit for revolutionising the racing world in the late 1950s and on into the 1980s, but it was Charles and John Cooper and their team who started it all and to some extent had an even greater impact on the racing world back in the early 1950s. The advent of the lightweight, rear engined and very competitive Cooper 500 put the Cooper Car Co. firmly on the map and launched the career of a number of great drivers including Sir Stirling Moss.

International success soon followed in 1955 with the first of Coopers rear engine sports cars, the distinctive Type 39 Bobtail.  Formula 2 and then Formula 1 successes followed and by the late 1950’s Cooper were a household name and very much the class of the field.

In November 1958 Cooper replaced the highly successful Bob-Tail with the even more revolutionary looking Cooper Monaco Mark I. Named ‘Monaco’ after Maurice Trintignant’s 1958 victory in the Monaco Grand Prix, behind the wheel of a Rob Walker-entered Formula 1 Cooper-Climax.

Penned by Owen Maddock, the new Monaco utilised many common components with the Formula cars being produced at that time and maintained similar weight distribution, with four main 1 ½ inch, 18-gauge tube longerons spanning the two-seat width amidships and the engine and gearbox mounted in the rear. The original Cooper Monaco Mark I model combined coil-and-wishbone front suspension with a transverse-leaf rear end, disk brakes all round and was a notably short-wheelbase sports-racing car, amazingly low and light for the period, clothed in sleek and purposeful aluminium bodywork.

The Monaco was a success straight out of the box taking the fight to the likes of Graham Hill in the 2 and 2.5-litre Works Lotus 15. Several cars were sold as self-assembly kits for tax reasons or collections of suitable parts for the customer teams to assemble, or have assembled, for themselves.

This stunning example is arguably the most special of all the Monacos. Commissioned new in 1959 by Sir Stirling Moss, it was prepared and entered, for Moss, by Keele Engineering. Known for building Go-Karts they were based in Stirling’s home town of Tring and Stirling was a director of the company. Sold to Moss in chassis form, and fitted with a then rare 2.5-litre Coventry Climax FPF engine, this car is unique in that it was fitted with a special coil sprung rear suspension set up developed by Alf Francis for Moss’ GP car and the 5-Speed gearbox. The photographs below show the car in build at Keele Engineering in 1959.

Known as Chassis No. 20, Stirling qualified the car on the front row of the grid for the 1959 British Grand Prix Sports  Car Race at Aintree as seen above. After stalling on the start, he was hit from behind. The bump, started the engine and he was charging through the field when he had to retire with a burst oil pipe.

After Aintree, Moss took the car on a successful Scandinavian Tour, racing the car at Karlskoga in Sweden and the Roskilde Ring, near Copenhagen in Denmark. Moss won both races with the car. In Stirling’s diary, according to Doug Nye’s book – Cooper Cars – the Monaco was geared to 160mph at 7,000 rpm and he comments: ‘Karlskoga – bad brakes, broken roll bar, jumping gears etc…. led start to finish, beat Brabham &Bonnier; 137 at 7,000 gearing, got 6,700rpm…’

After the success of his Scandinavian tour, Moss then moved his focus onto the new Lotus 19 and the Monaco was laid up and the engine and gearbox were removed. According to John Bladen’s book Historic Racing Cars in Australia, Australian Bib Stillwell was looking for a Sportscar and heard of the Monaco. A deal was done with Stirling and the car was shipped to Australia without its engine and gearbox and with what looks like both the Keele Engineering coil sprung rear end modification and the standard leaf sprung set up. On its arrival it was painted in British Racing Green and was fitted with a spare 2.5 litre Coventry Climax engine from one of Stillwell’s single seater Coopers. From its debut at Warwick Farm on the 16th of September  1961, Stillwell immediately had great success with the  Monaco racing it alongside his T53 Low-Line Cooper single seater. He won the Australian TT in both 1961 and 1962, he won the 1962 South Pacific Sports Car Championship in 1962 and was runner up in 1963 and won the Victorian Sports Car Championship in both 1962 and 1963.

For the 1963 Australian TT the car was fitted with a 2.7 Climax engine and was timed at 160mph for a flying quarter mile at Longford on the 2nd of March 1963. The car was believed to have been run in both its coil and leaf sprung configuration, as can be seen the photo above (bottom left), taken at Warwick farm in 1961.

According to John Blanden, during 1964 Bib’s mechanic Gerry Brown obtained a special Chuck Daigh Buick V8 from the Scarab that made it to Australia. The Cooper first appeared with the V8 at Mallala on the 13th of October 1964. In late 1965 the car was sold to Dick Thurston who fitted an Oldsmobile engine. His first outing was at Calder on the 16th of January 1966, shortly followed by the Australian TT on the 5th of March where he came 5th outright and 3rd in class.

Not long after the TT the car was sold to Tony Osbourne who is first recorded as driving it at Calder on the 22nd of May 1966 now painted red with a silver stripe and nose. On the 21st of August it ran in the Surfers 12-Hour race, co- driven by Murray Carter. The car was then advertised for sale in both January and December of 1967. On the latter occasion without engine for $2,900.

According to John Blanden the next few owners are not certain for sure but Fred Wheelhouse, Peter Nielson and Charles Tominello were all involved at some point. In late 1970, it appeared for sale with Express Car Sales in Dandenong from where it was purchased by Pat McLernon of Morwell on the 4th of February 1971 for $1,600. By now the car was apparently starting to look tired, so he had a new body made by Ted Proctor of Sydney. The car was fitted with a 302 Ford V8. In 1976 it was offered for sale for $3,500 before being sold to Stan Rumble of Sydney and in 1987 Paul Moxham.

At the time the chassis is described as being in reasonable condition and fitted with an Oldsmobile engine. Paul Moxham set about returning the car to its original condition. A 2.5-litre Climax FPF was sourced and an aluminium body was built by Wall Hadley. On completion the car made a few appearances before it was sold to well known racers and BRDC members Frank Sytner and John Coombs in late 2000.

Ownership of the Cooper soon moved solely to Frank and he repatriated this famous car back to the UK and entrusted highly regarded racing specialists Simon Hadfield Motorsport to completely restore the car back to its original Moss race winning coil sprung configuration.

Simon and his team meticulously retuned the rear end of the chassis back to its original 1959 specification with the help of the former foreman from Keele Engineering (who had been present when the car was converted from new), using period photographs and studying the original Alf Francis modification on the T51 Grand Prix car.

Once restored, the car returned to the track in 2-litre format in the hands of Frank Sytner, with Frank and Simon Hadfield together, it had an almost unbroken record of race wins and podiums. Frank won nearly every race in 2001 and 2002, winning all bar one rounds of the BRDC ’50s Sportscar Championship and the championship itself. He also won the competitive ’50s Sportscar support race to the British Grand Prix.

In his ownership the car continued to be maintained and raced with great success by Simon Hadfield and his team. In  2010 the car was fitted with a new Crosthwaite and Gardiner 2-Litre Climax FPF engine.

In 2011 No. 20 was purchased by its current owner, himself a well-known and competitive racer. He has had the car maintained with no expense spared by equally respected race preparation specialists, Pearsons Engineering and has gone on to race the car in the Stirling Moss Trophy partnering with Gary Pearson. In 2018, the car was invited to the Goodwood Revival for the Sussex Trophy.

Most recently, the Coventry Climax FPF engine received a rebuild by Ray Buckley, and has been fitted with a new pair of sand cast Weber 45DCO carburettors. Since this work, the only use for the Cooper was at the 2019 Goodwood Revival, where it was invited to be part of the Cooper celebration demonstrations.

Accompanied by past FIA papers and an extensive history file, including period photographs from both Moss’ and Stillwell’s ownership, as well as more contemporary historic racing and a comprehensive collection of invoices for work both during Frank Sytner’s ownership and the current owners time. The Cooper is also accompanied with a removable roll-hoop.

This is a unique and exciting opportunity to own such an important and highly competitive car. Supplied to and driven to victory by the great Sir Stirling Moss, recipient of a decorated racing career with Bib Stillwell in Australia, winner of the prestigious BRDC ’50s Sportscar Championship and most importantly built in 1959 with development coil sprung rear suspension and 5-speed gearbox.

Surely this is the ultimate ’50s sports racing car. This is your chance to join the Stirling Moss Trophy amongst others   and the ever popular ’50s Sportscar grids including the prestigious Goodwood Revival.