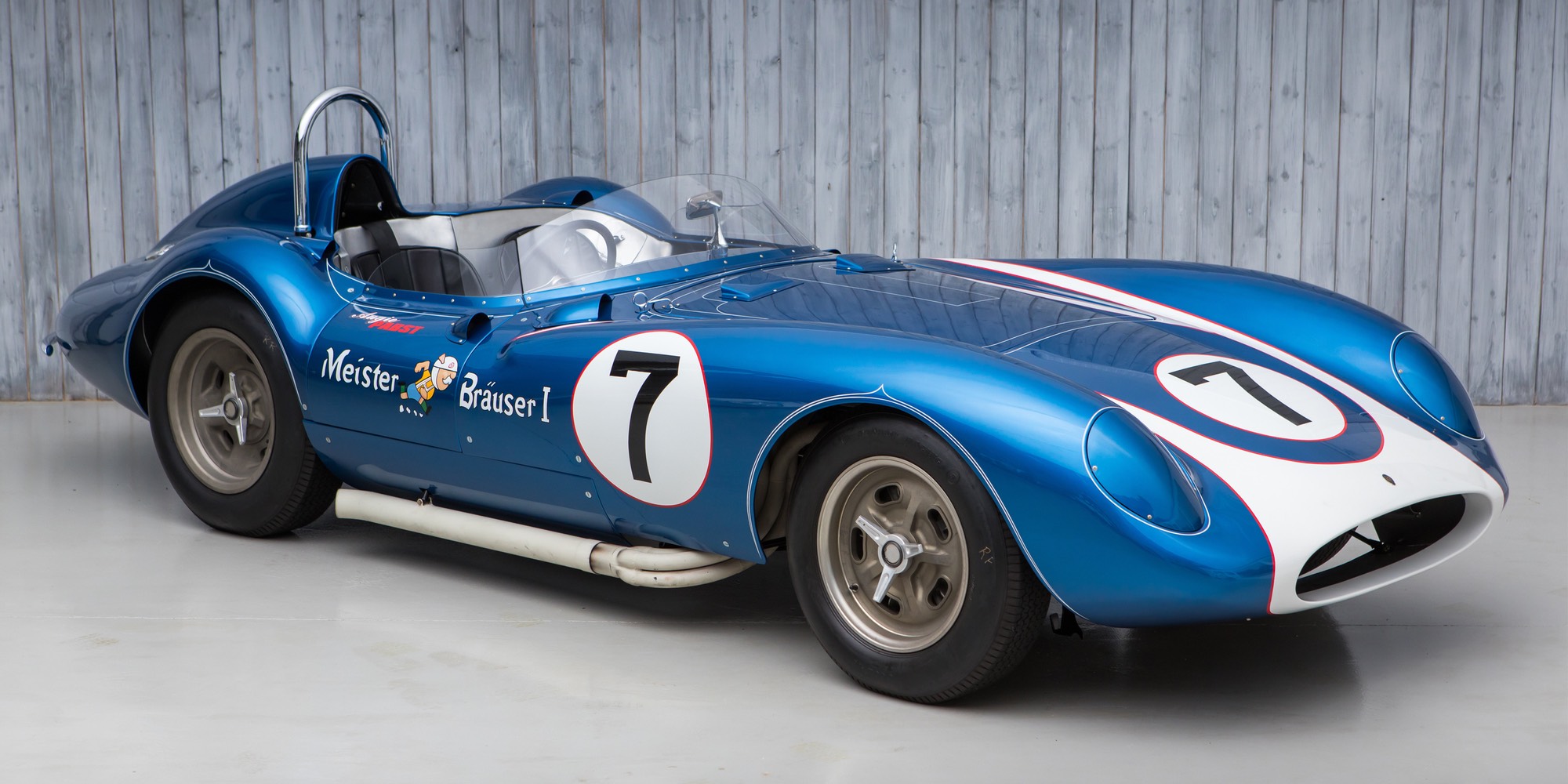 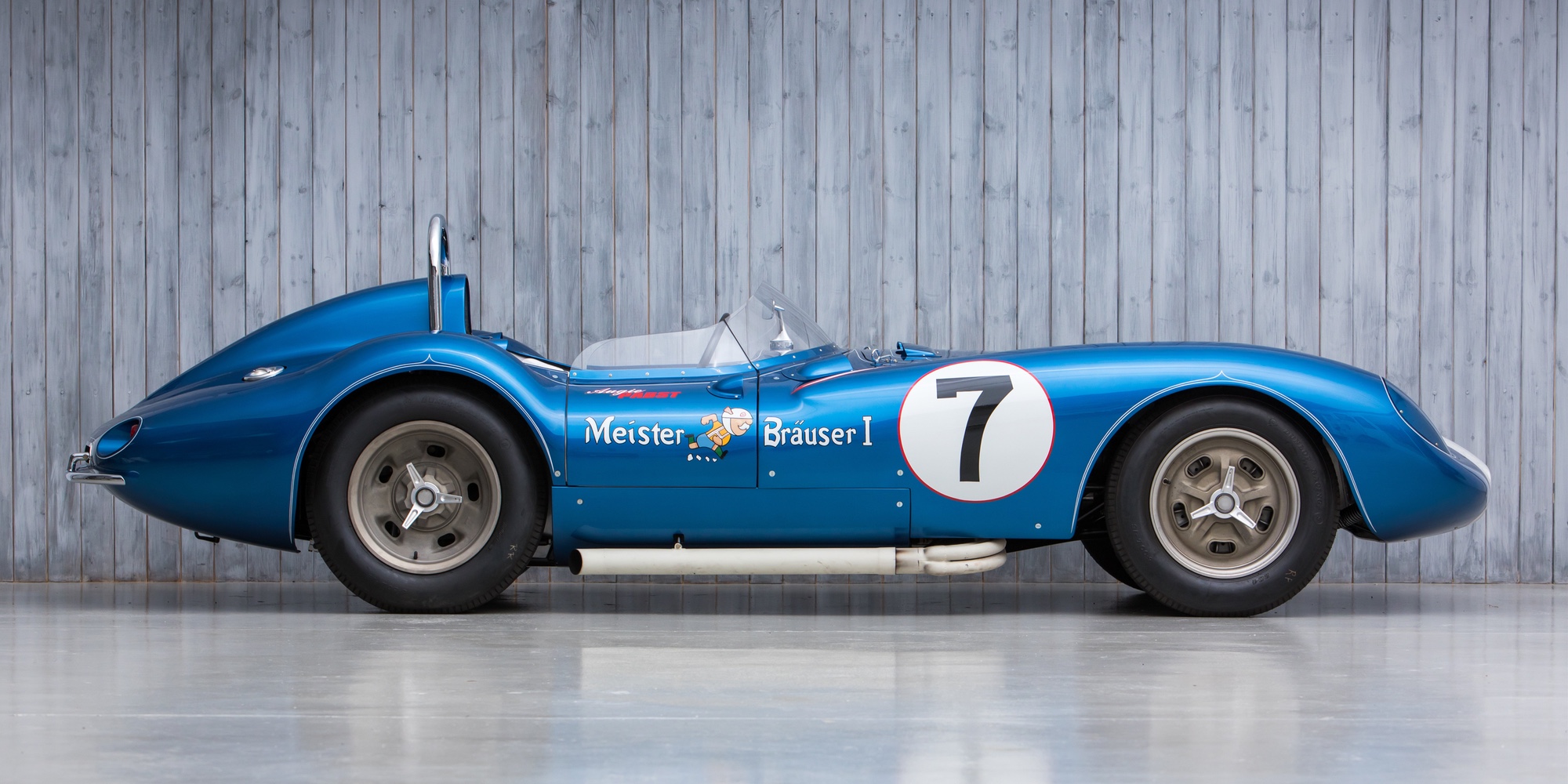 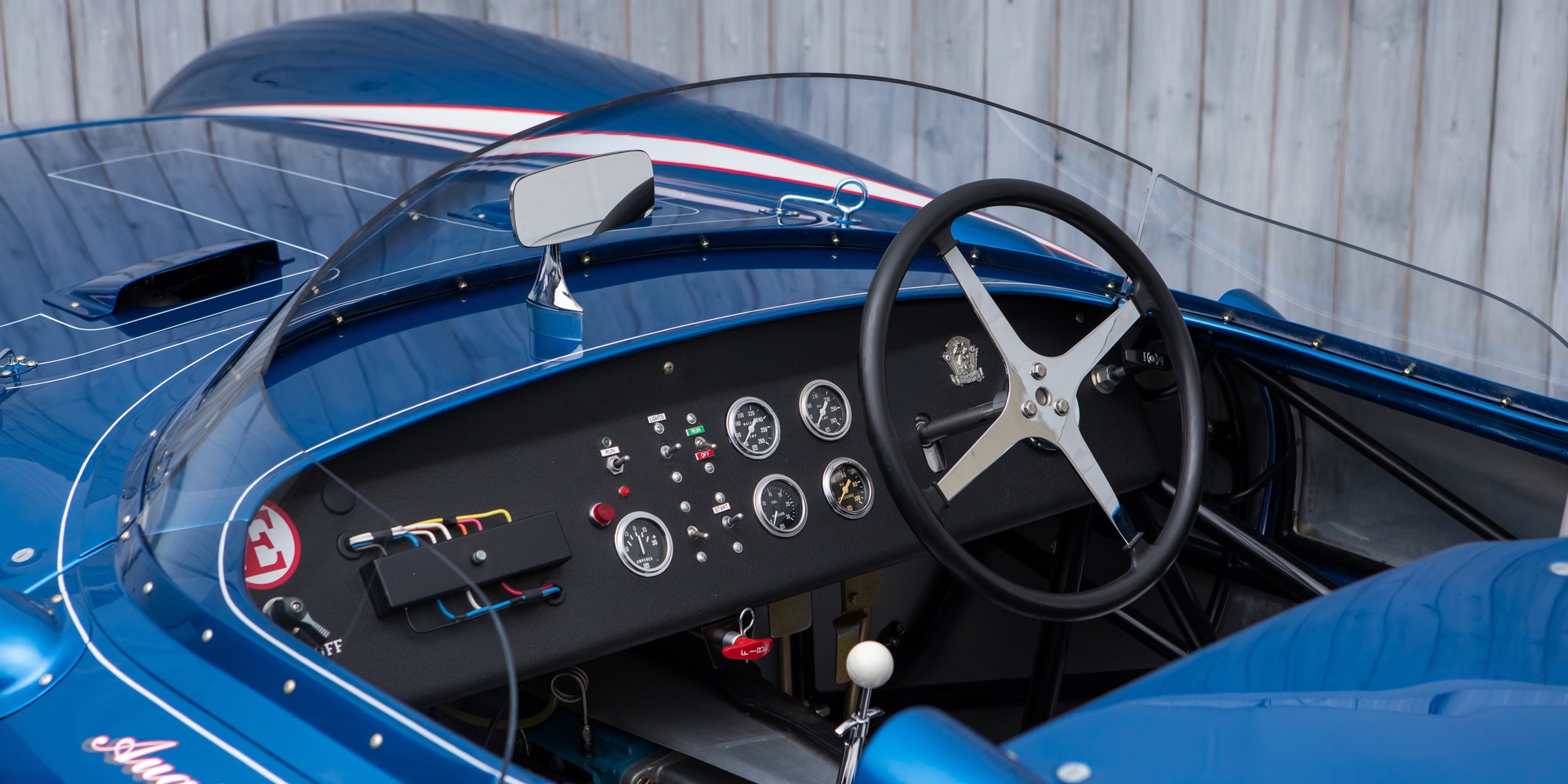 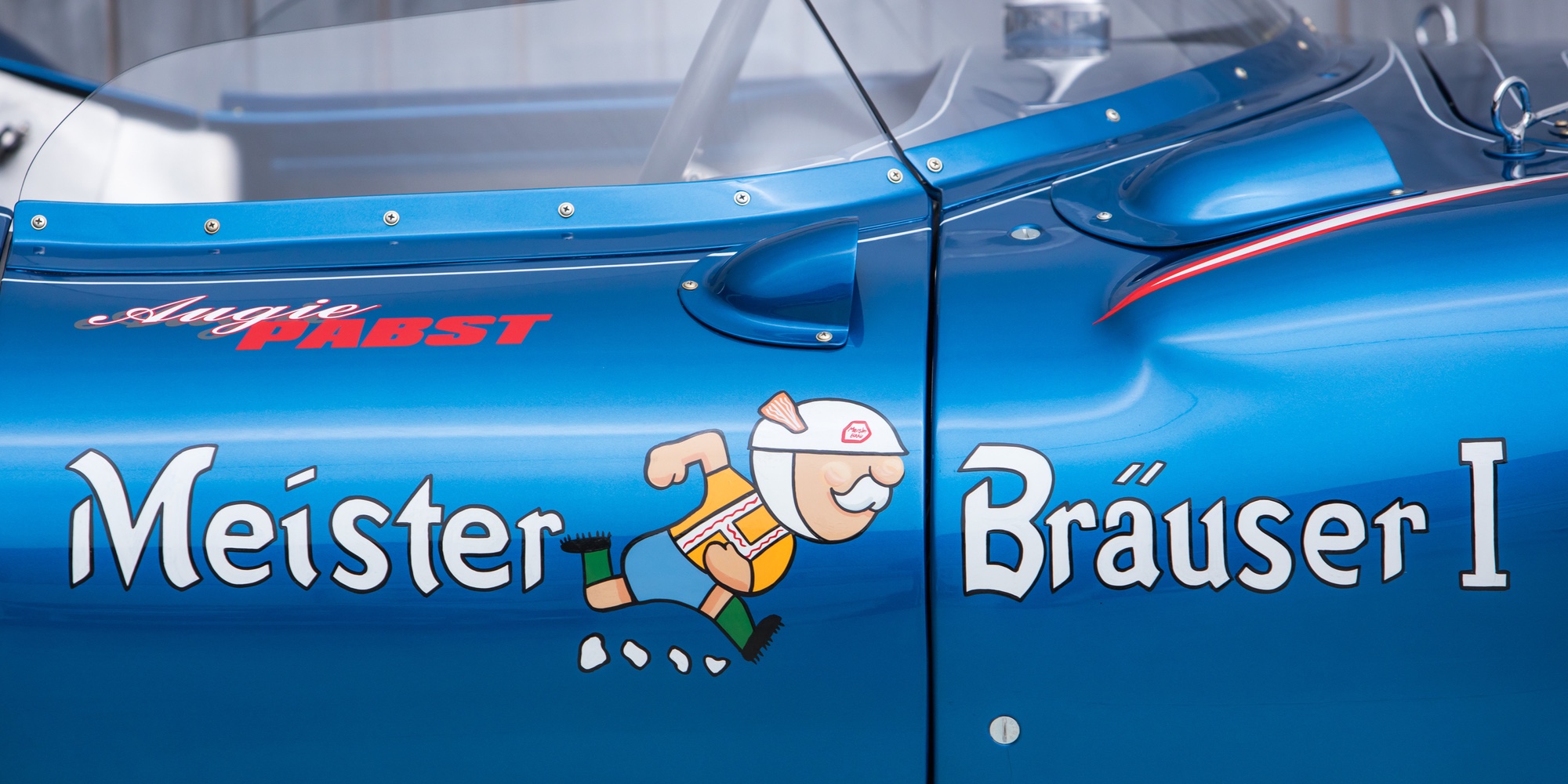 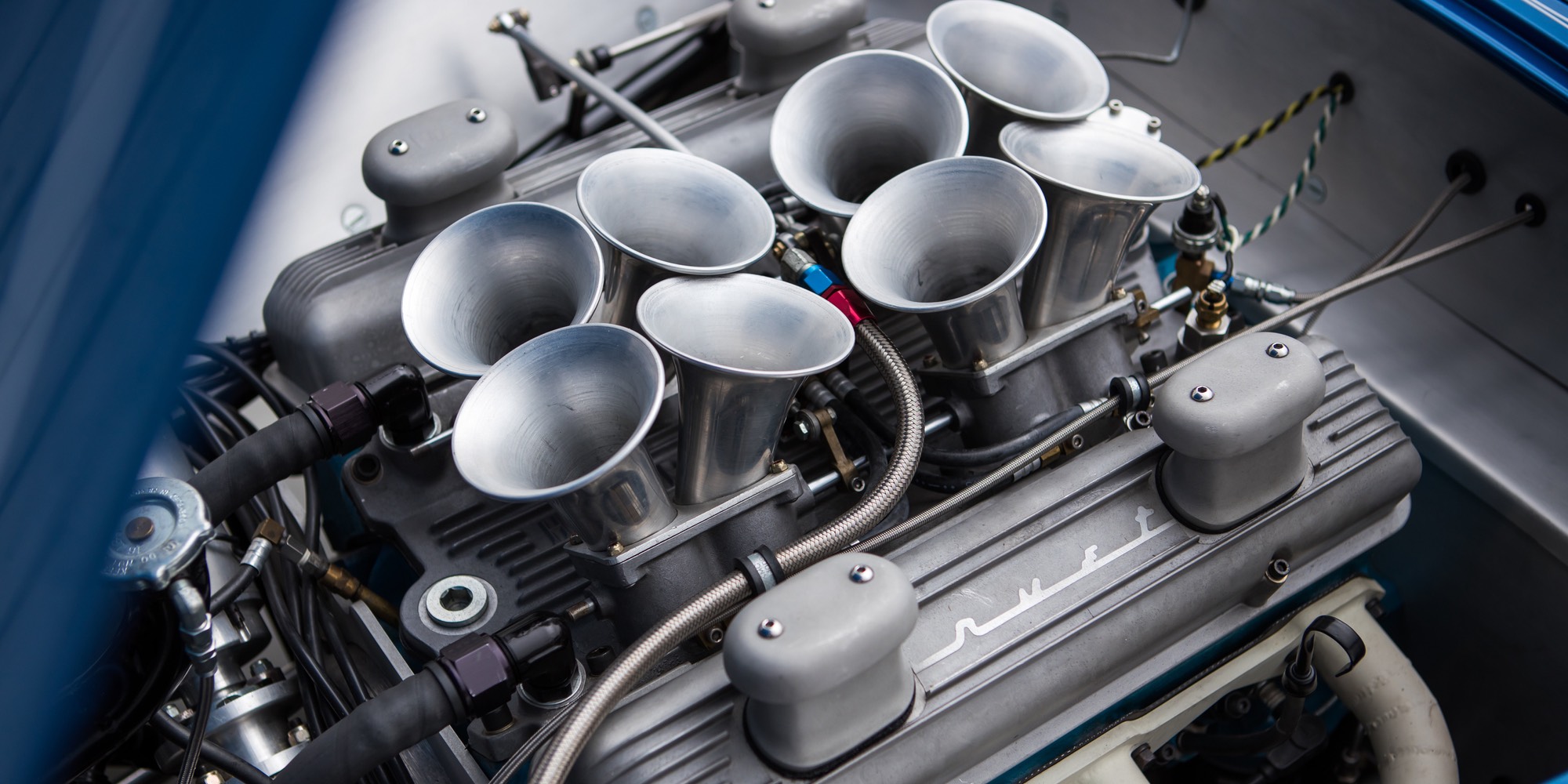 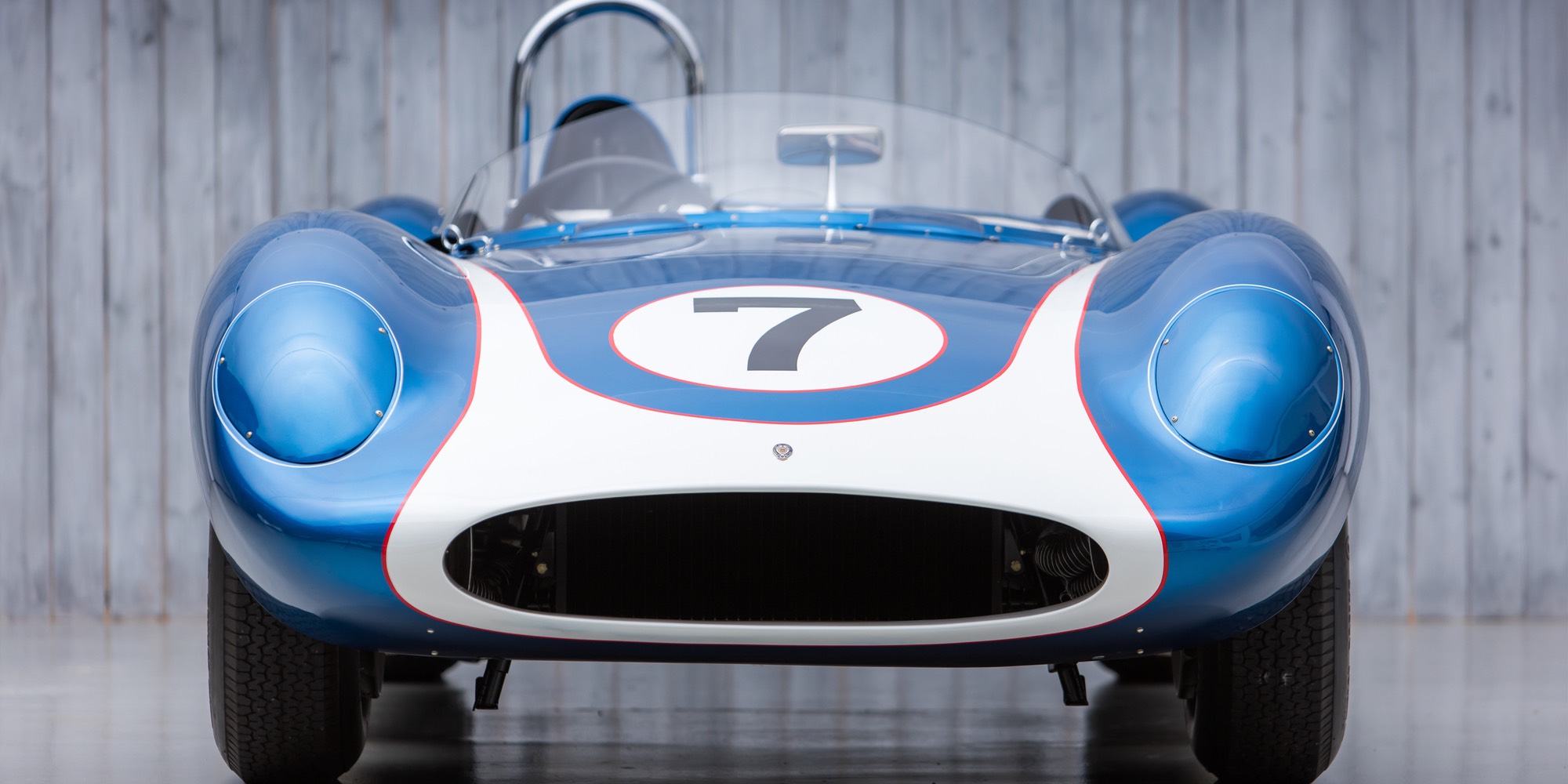 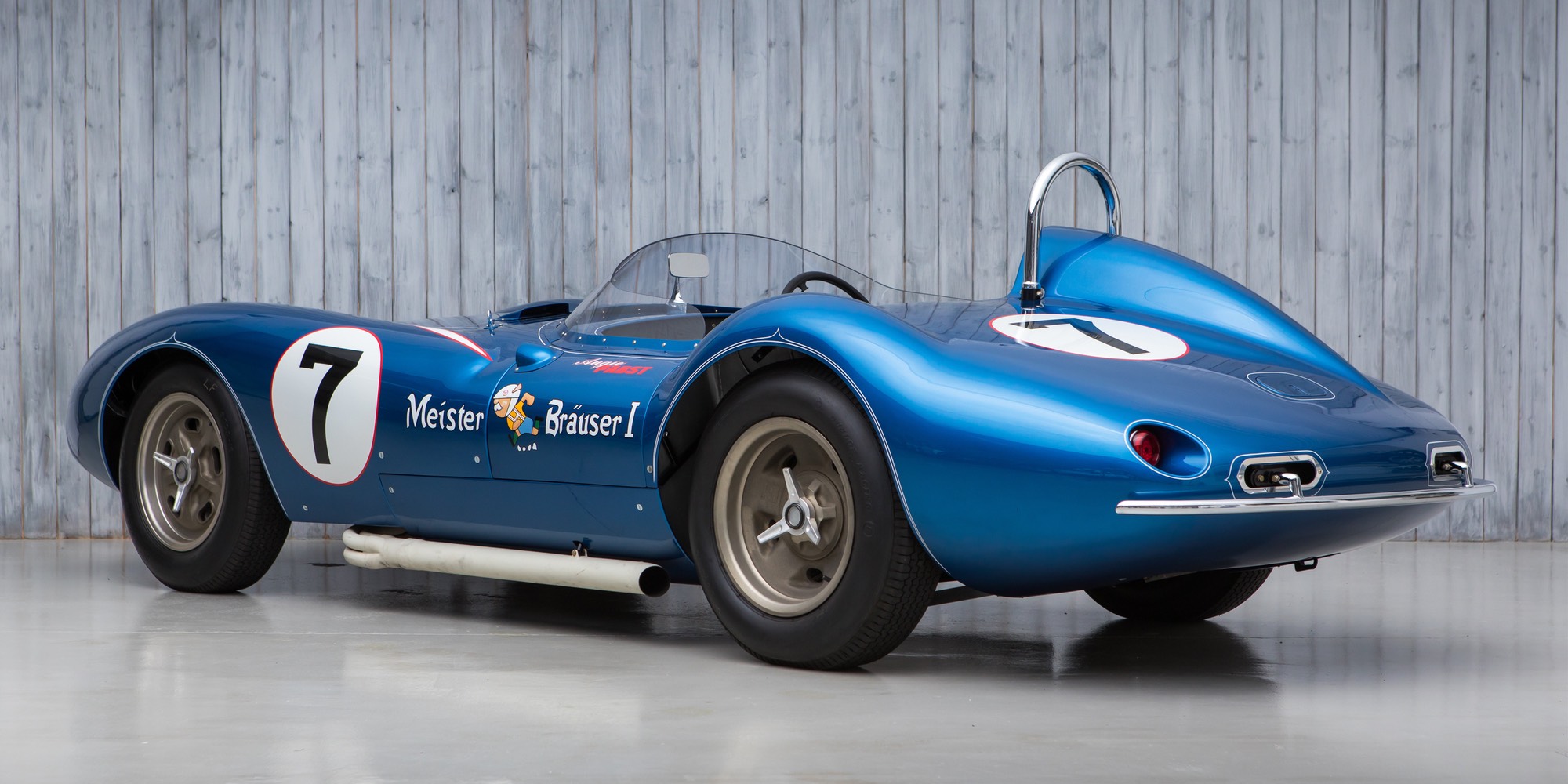 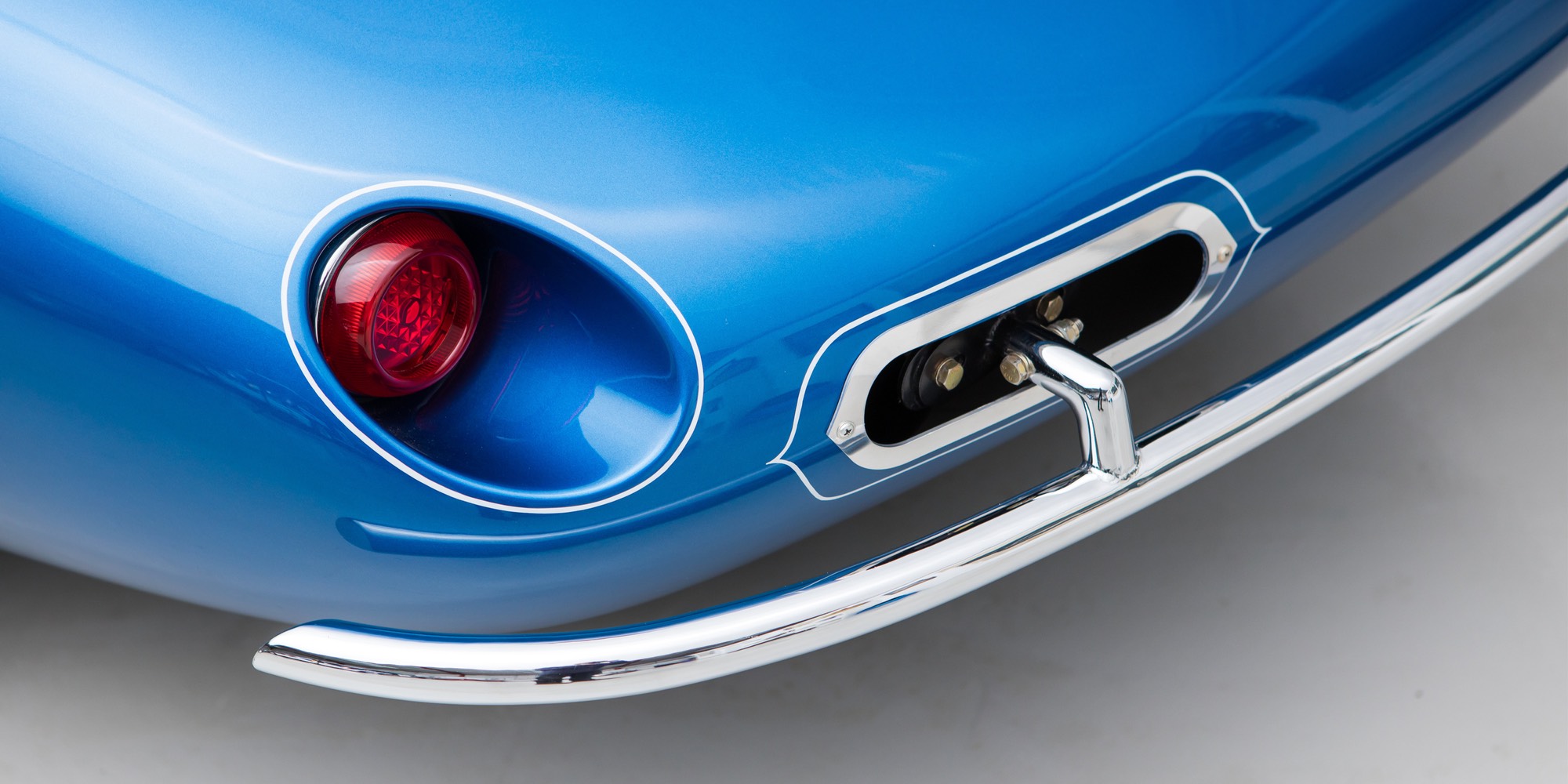 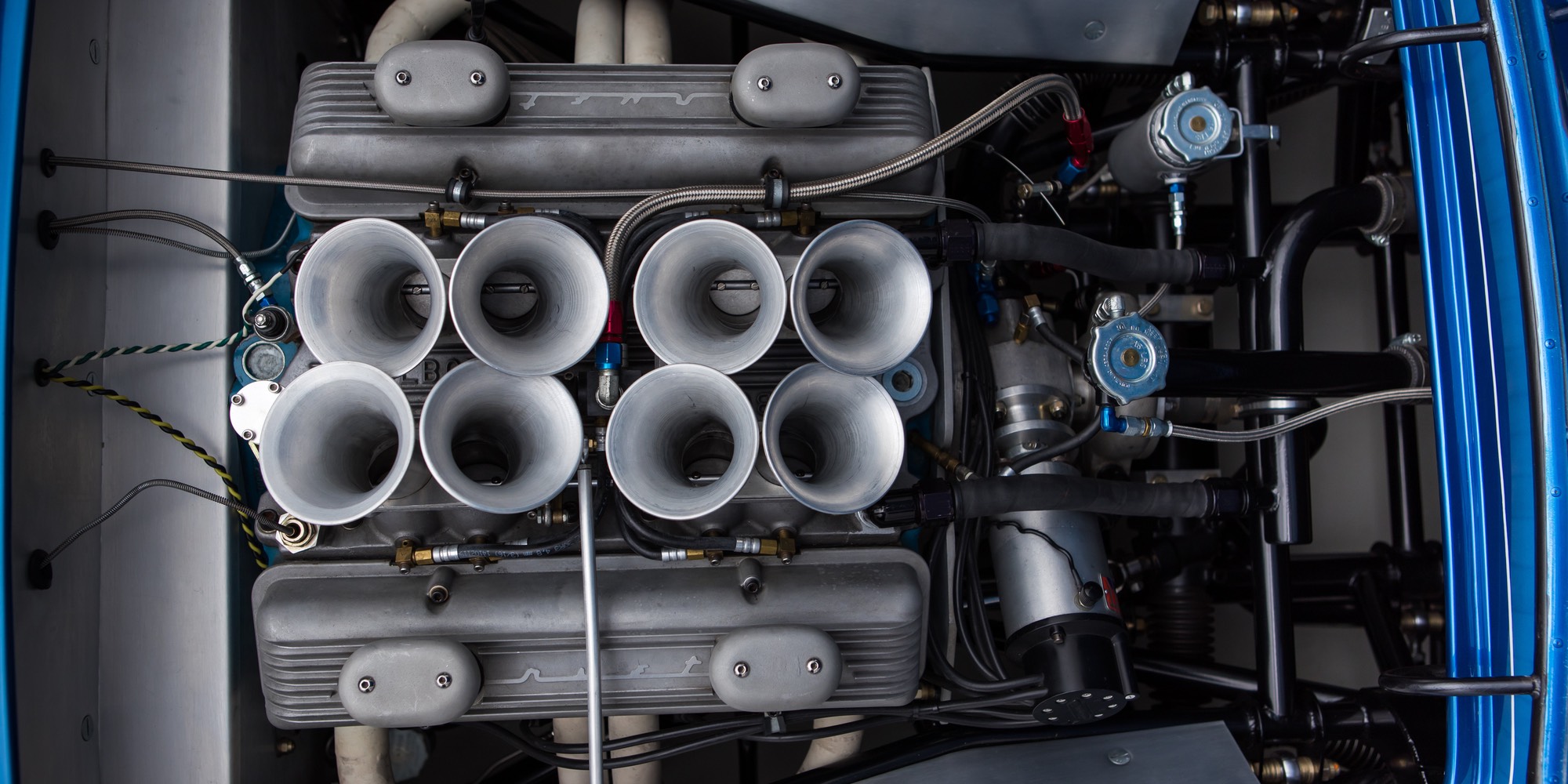 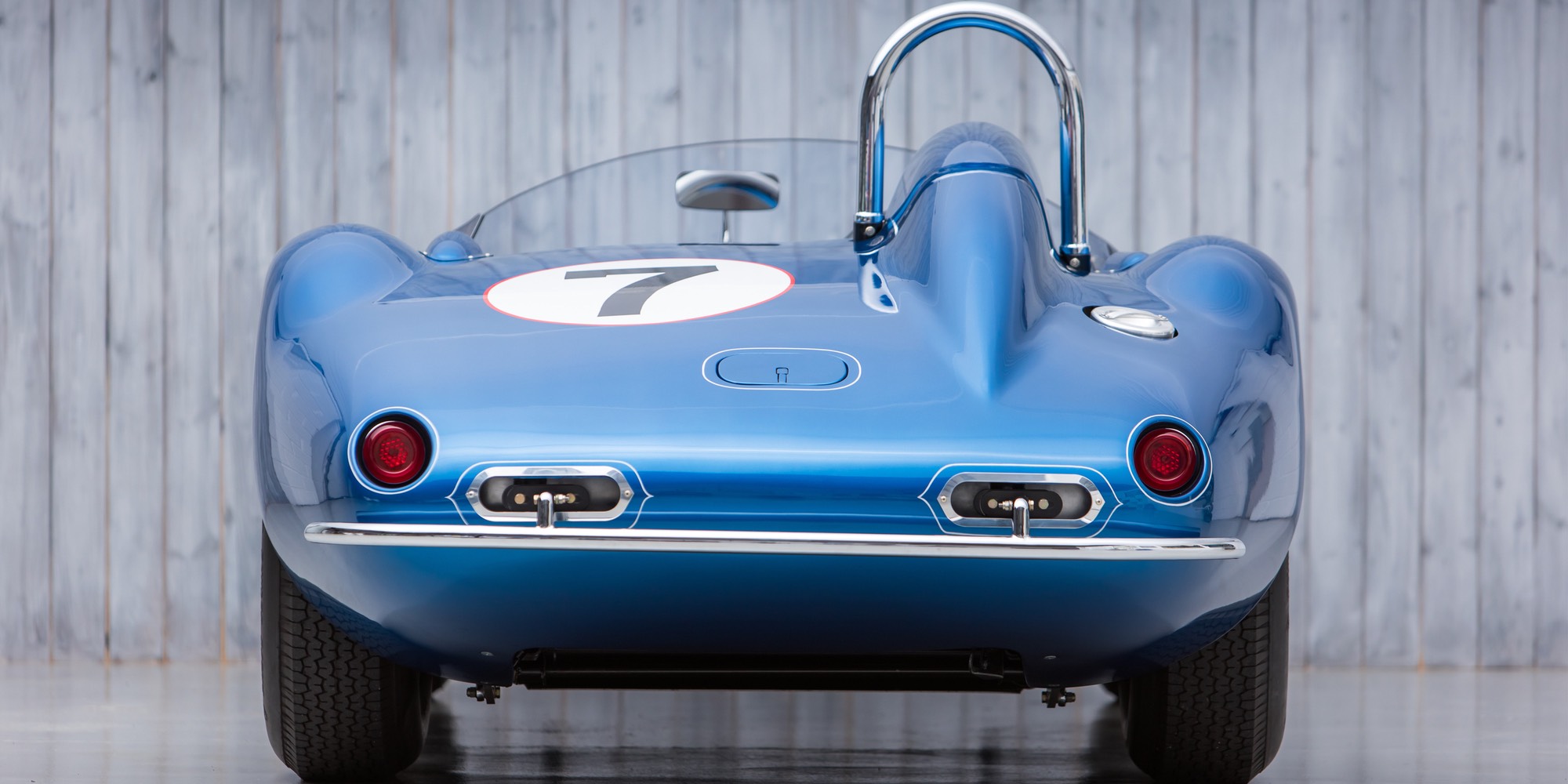 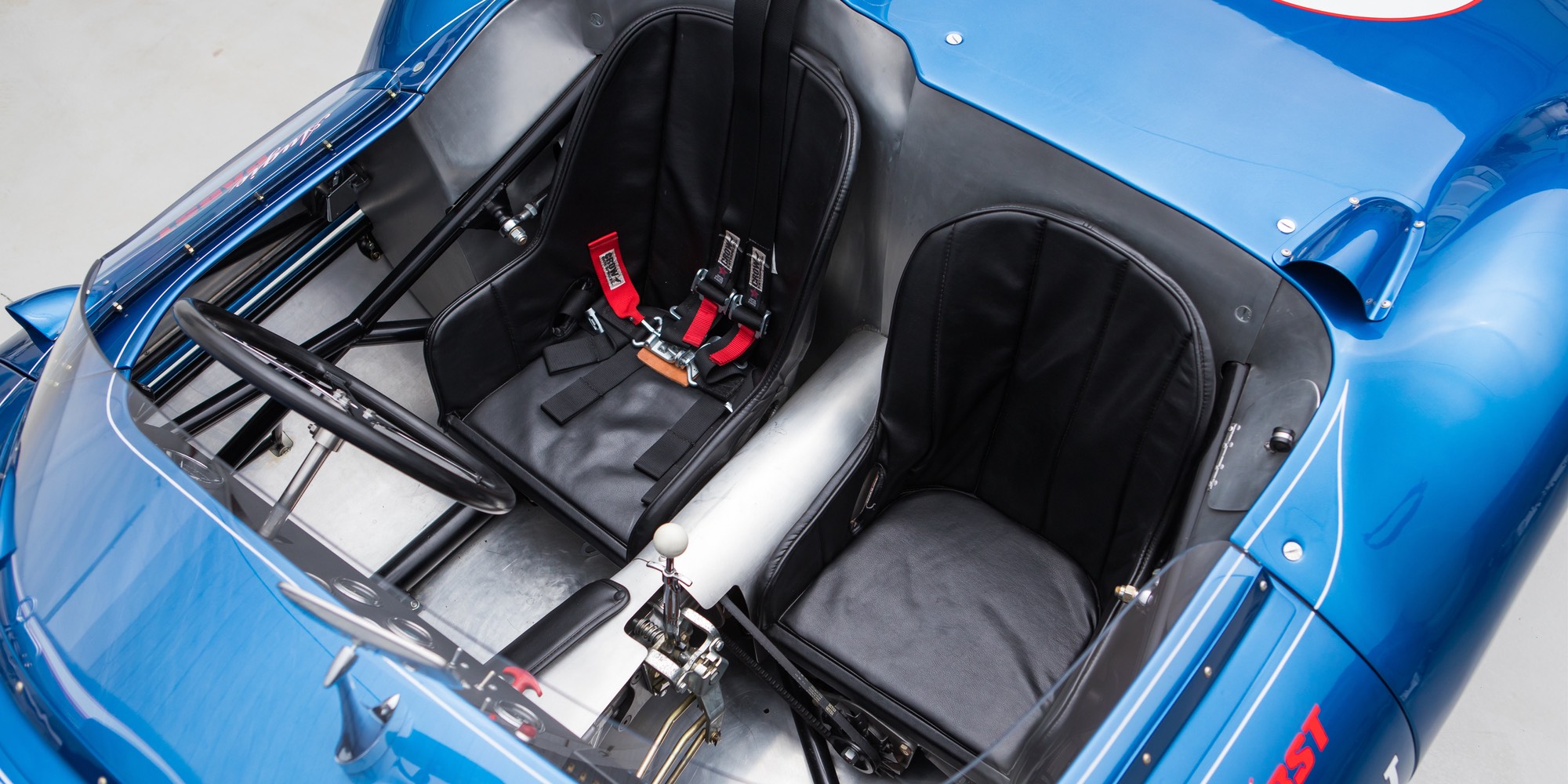 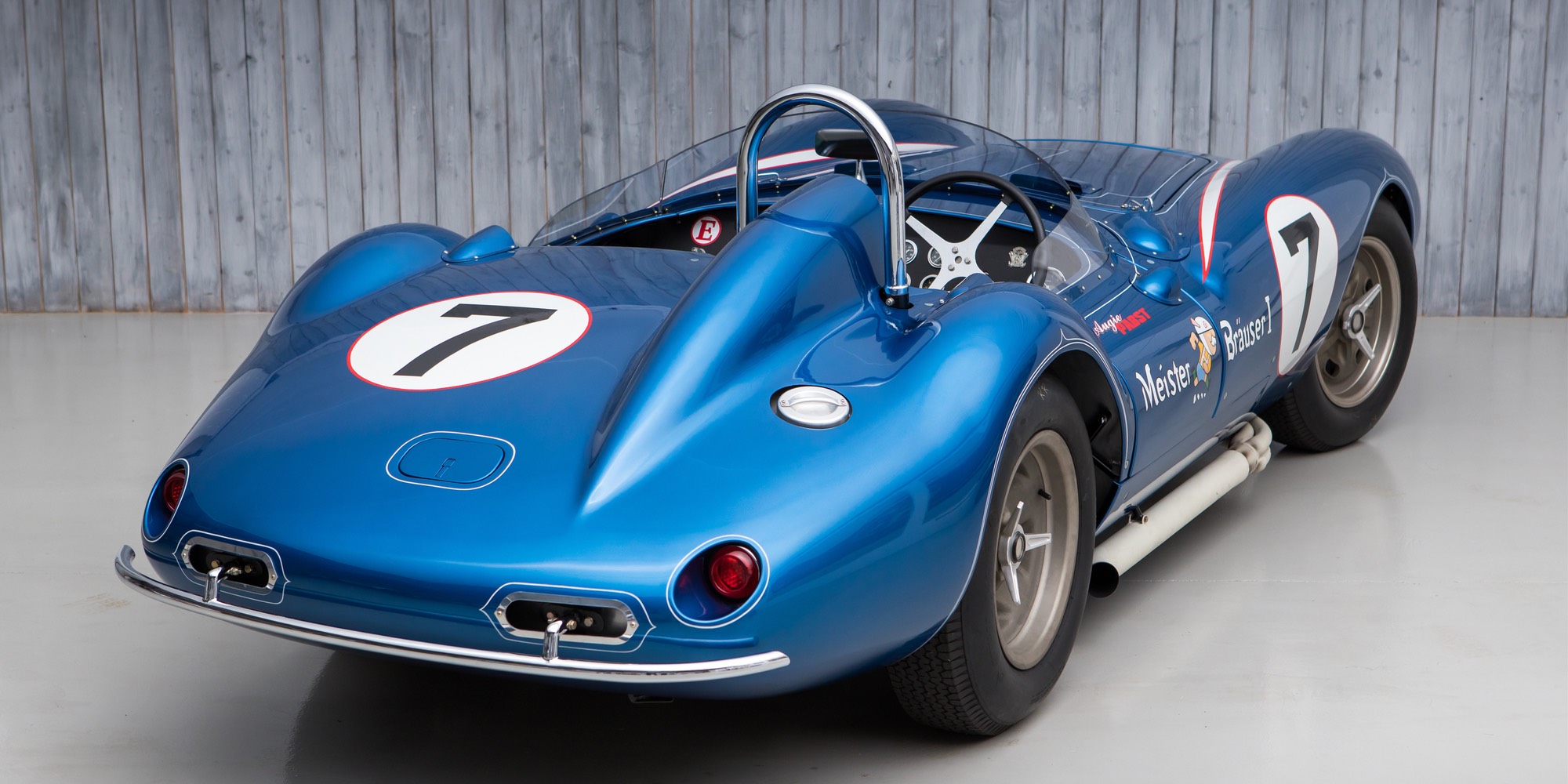 The Scarab racing car was the brainchild of young Lance Reventlow and his friend Bruce Kessler. Reventlow, just 22 years old at the time, the son of Woolworth heiress Barbara Hutton, had travelled to Europe with Kessler with the idea to buy a sports-racing car to campaign in the U.S.A. Having visited various manufacturers, the pair returned home unsatisfied and decided that they would have to build a car themselves.

For power, tuning experts Traco prepared an over-bored small block Chevrolet V8 engine with Hilborn fuel injection. The high performance engine was mated to a Borg-Warner T10 gearbox, and distributed to the magnesium Halibrand wheels via a Halibrand quick change differential. For braking, the all-American outfit used huge finned aluminium drums with iron liners, mounted outboard at the front and inboard at the rear.

The car was clothed in a striking, lightweight removable aluminium body, penned by Chuck Pelly, who was just 18 at the time, and formed by Emil Diedt. With Reventlow christening the cars as Scarabs, after the Egyptian good luck charm, the metallic blue and white pinstripe paintwork was done by legendary painter Von Dutch.

Much success followed, both with the works Reventlow Automobiles Incorporated team in 1958, and then with the private Meister Bräuser Racing Team. A close associate of the Peter Hand Brewery, Harry Heuer secured sponsorship from them to form the Meister Bräuser Racing Team. Heuer’s team ended up with both of the Scarab MkIIs, and swiftly delivered on his promise of winning the sponsors a national championship, with his driver Augie Pabst taking consecutive national titles in 1959 and 1960.

The car we have the pleasure of presenting today is an exacting reproduction of the ex – Augie Pabst, Meister Bräuser Racing Team Scarab MkII. It is the product of three year and countless hours of research and development, with the help of several members of the original team throughout the build process.

All of the parts needed to recreate the Scarab MkII were specifically designed, engineered and developed to be accurate to the originals.

The specification of mechanical components have also been matched to the originals, with the 339ci Chevrolet V8 featuring an original Lehmann front drive, Joe Hunt magneto and Hilborn fuel injection. The product of the engine is a mighty 446hp and 407 lbft.

Magnesium wheels are utilised, rather than heavier aluminium alternatives, an accurate brass radiator was made, Stewart Warner gauges fitted, and correct to period Porsche 550 taillights used. For safety, the aluminium fuel tank is fitted with an FIA compliant fuel bag, and 5-point seatbelts are installed.

The Meister Bräuser I recreation was completed in 2017, and subsequently it has been issued an FIA HTP, making it eligible for the Stirling Moss Trophy with the possibility of the some of the Pre-’66 series which allow early sports racers. Since completion, the Scarab has completed minimal running and presents immaculately, with the attention to detail plain to see.

Accompanying the Meister Bräuser I recreation are signed letters from Bruce Kessler, Sonny Balcaen, Chuck Pelly and Harry Heuer, complimenting the framed certificate signed by members of the original Meister Bräuser Racing Team. Furthermore, road registration has been granted for the car in California.

With the three original cars remaining in long term ownerships, the Meister Bräuser I recreation is out of the ordinary and has all the makings of being an exceptionally fast and competitive ‘50s sports car, as the original cars proved to be in period. With high performance, yet widely available drivetrain components, the Scarab should also be practical for the historic racing of today, and will certainly stand out from the crowd!