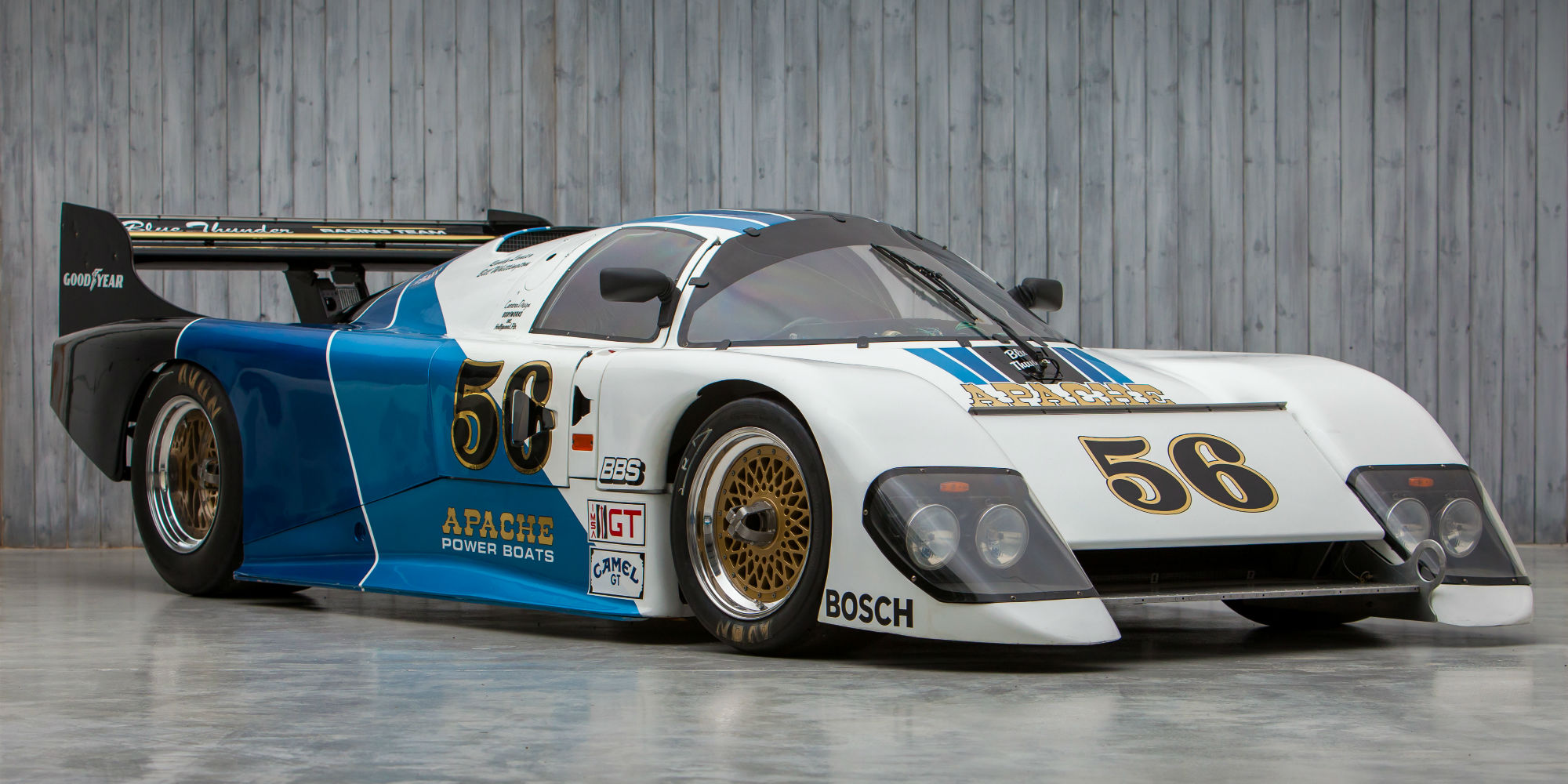 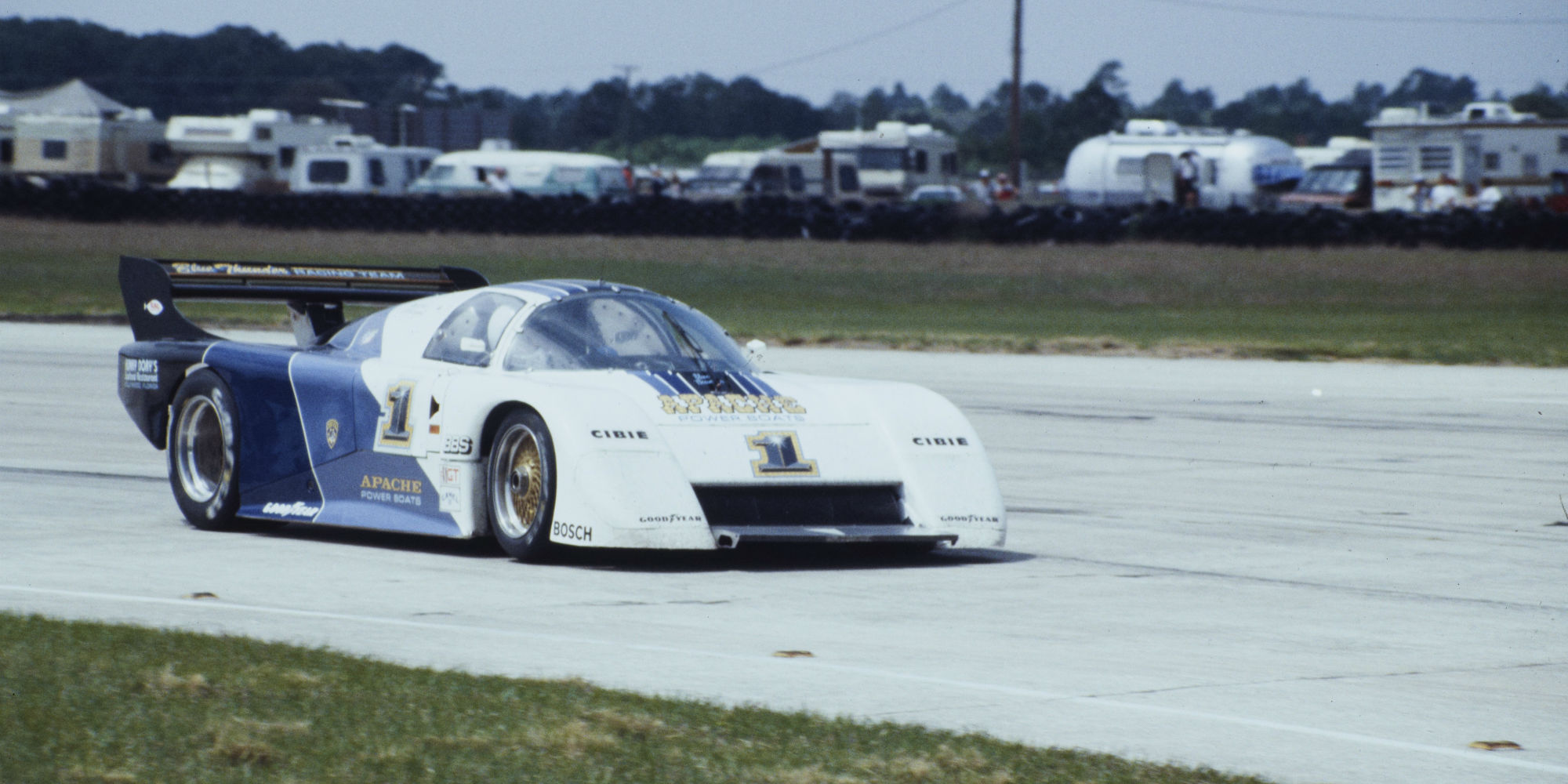 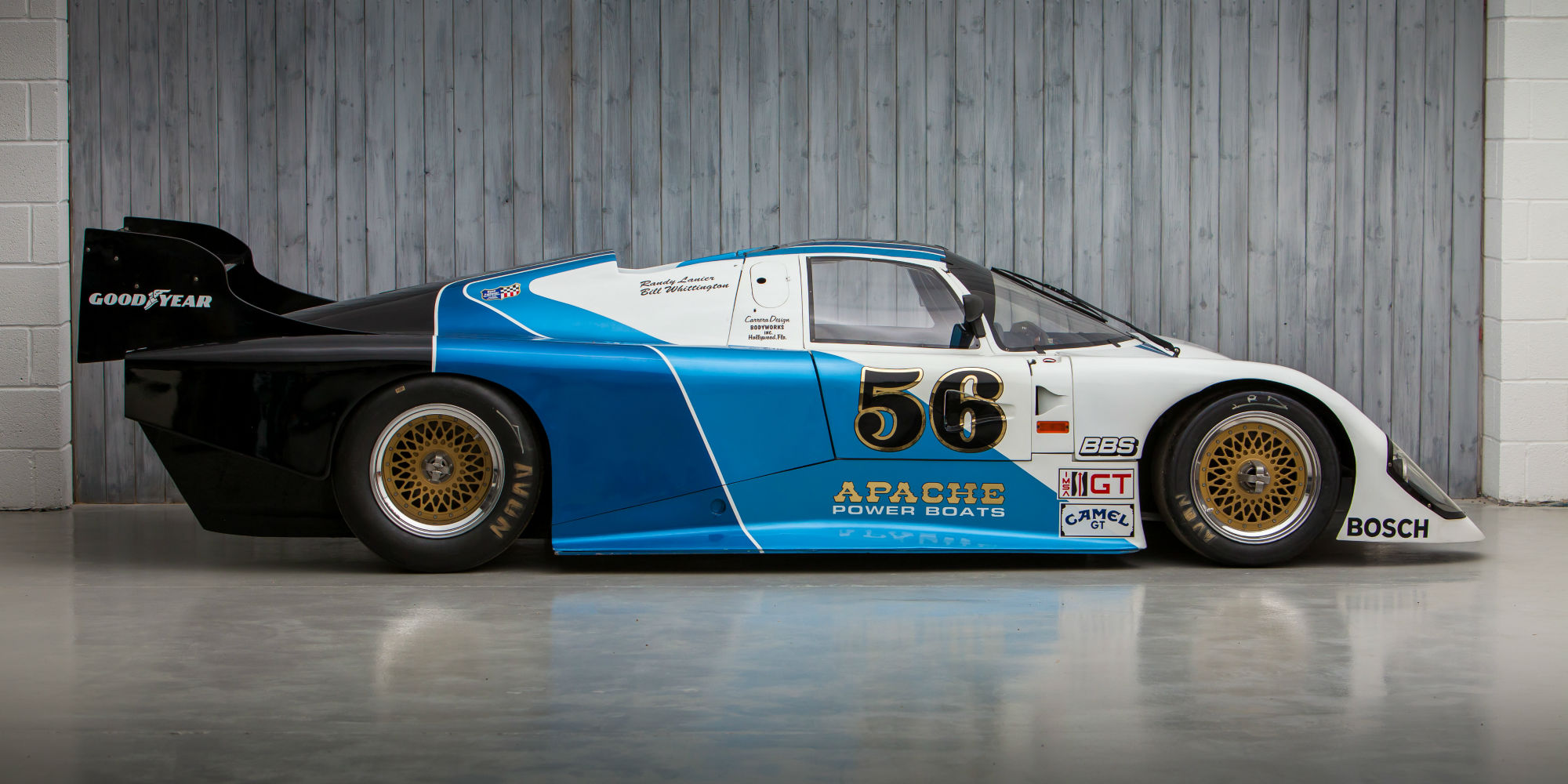 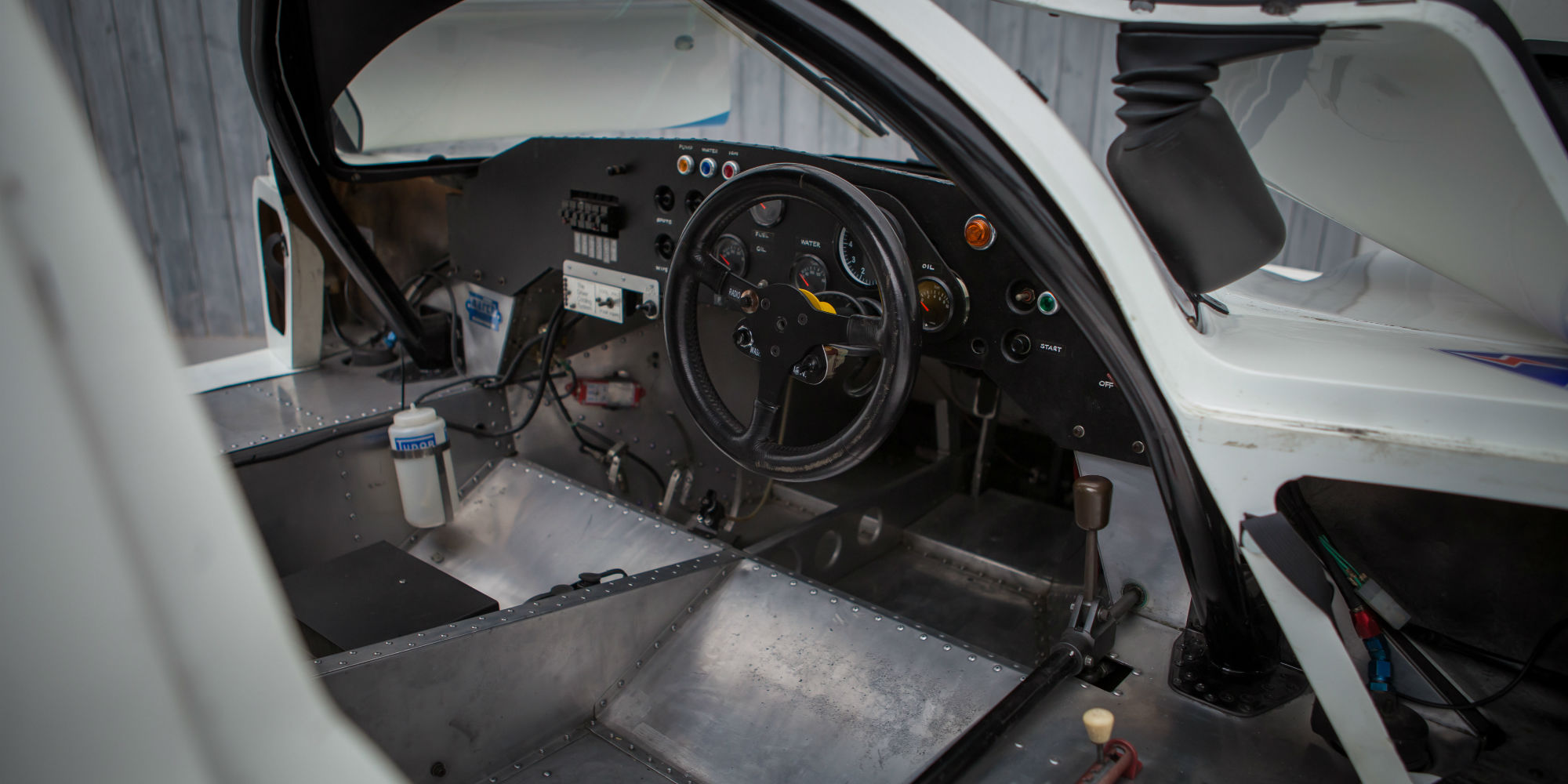 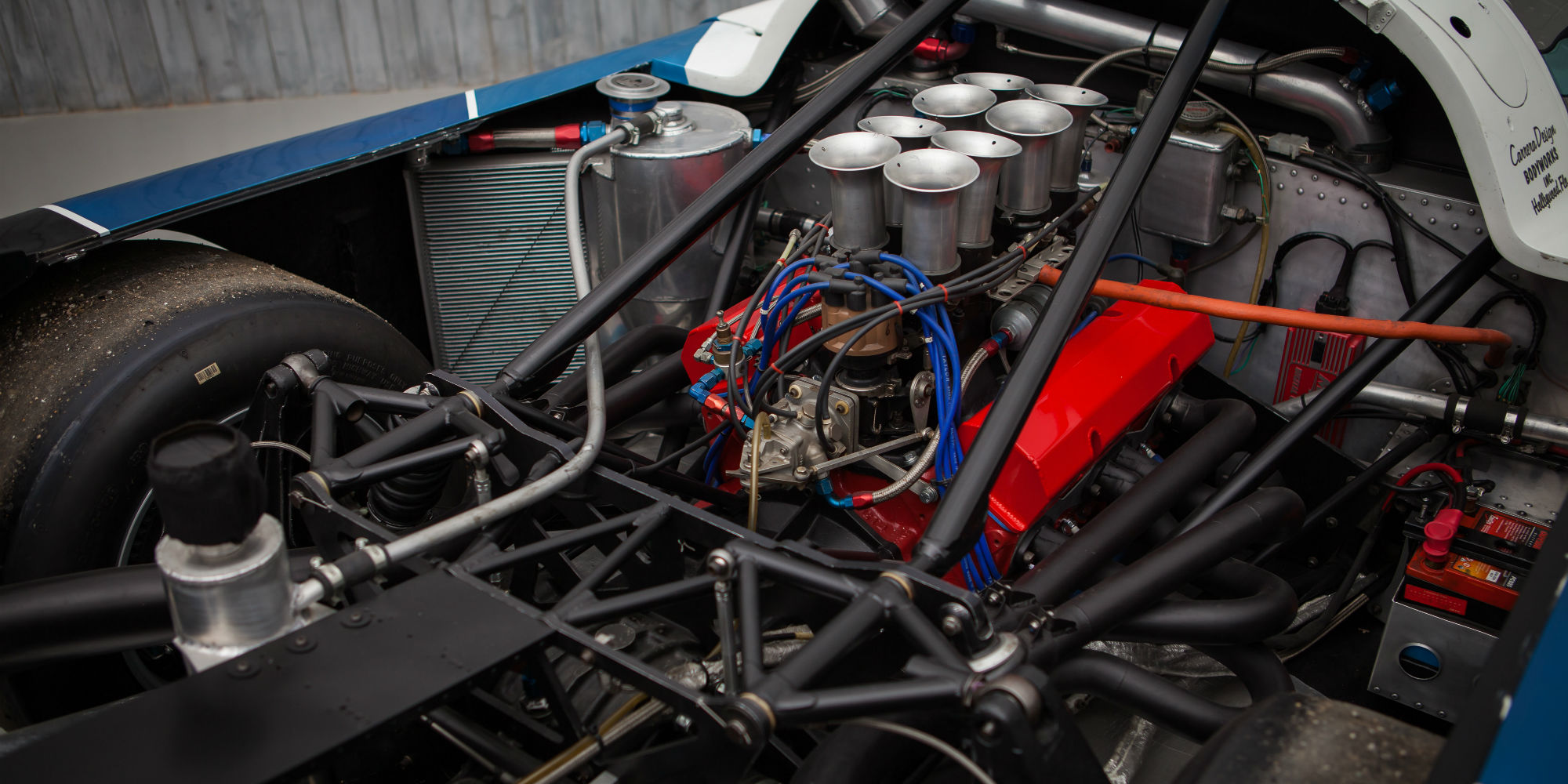 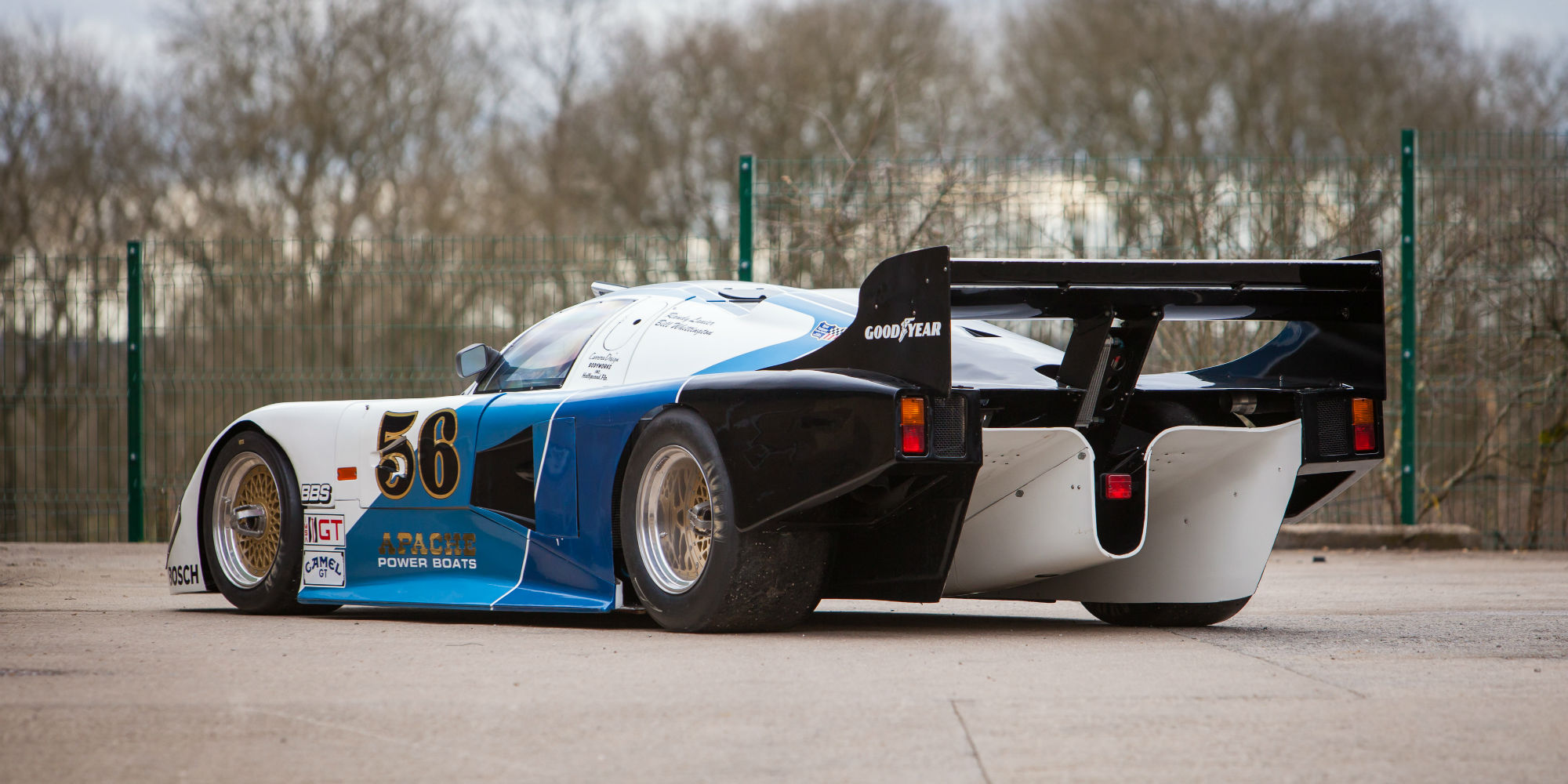 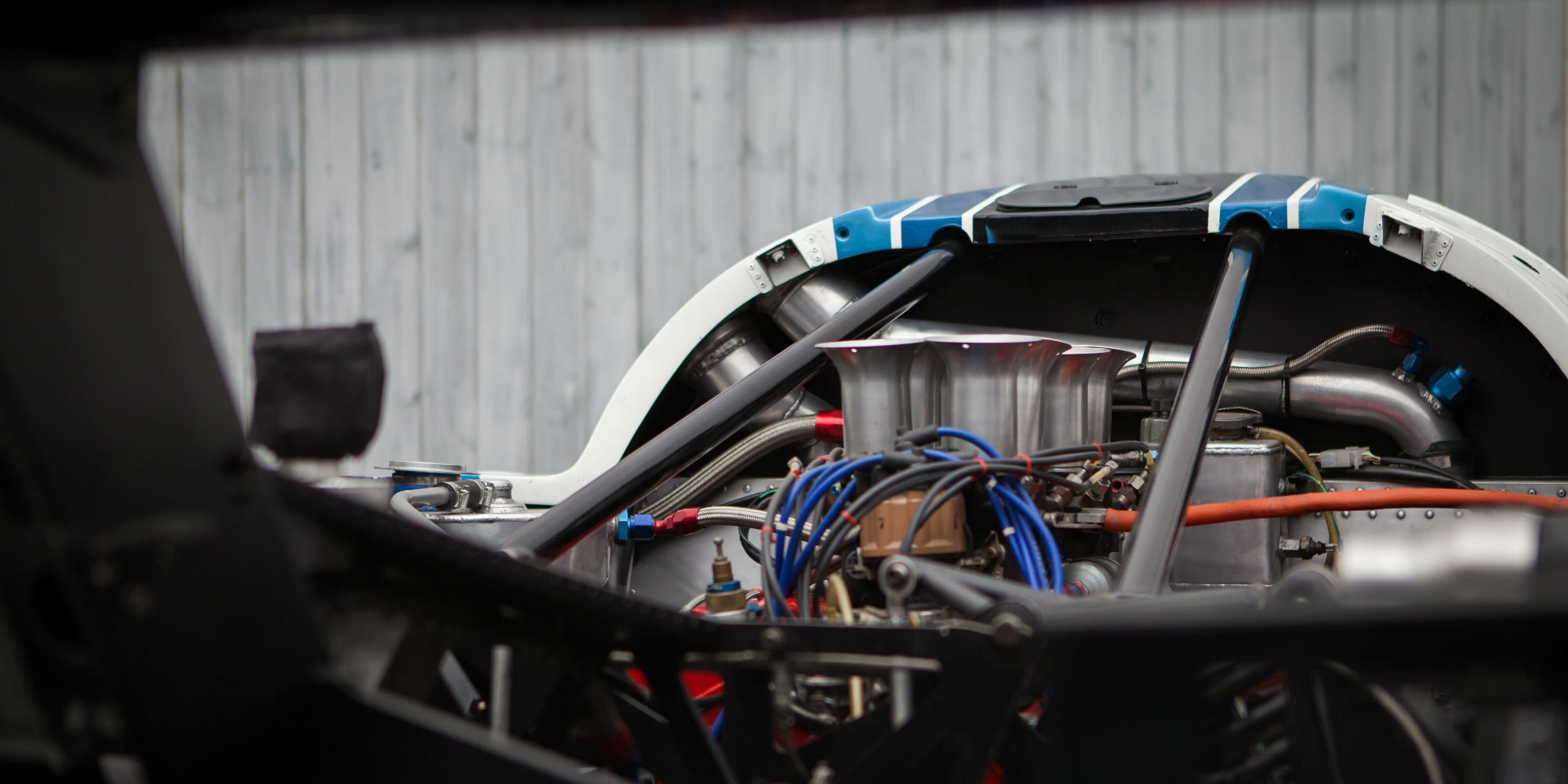 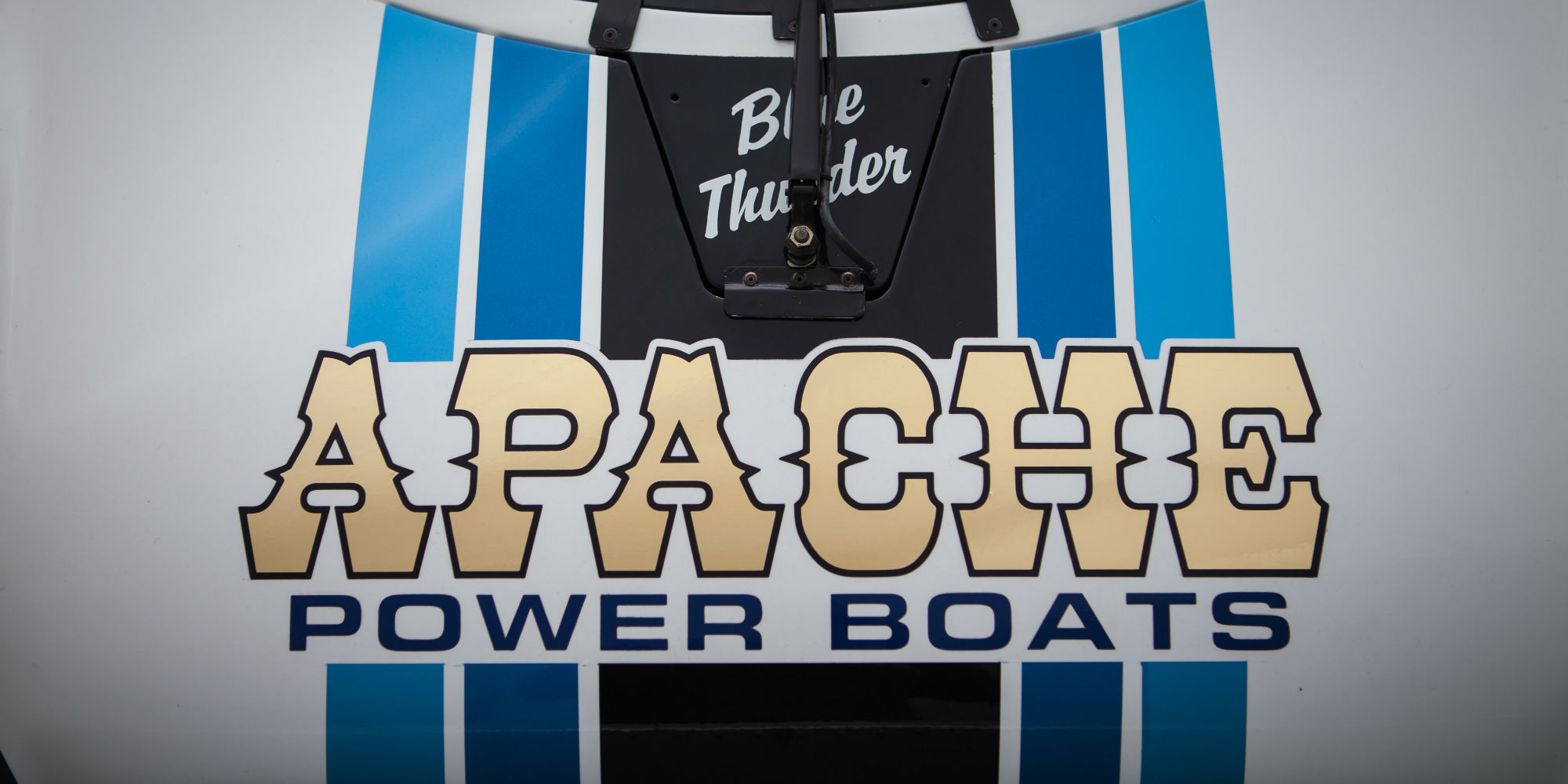 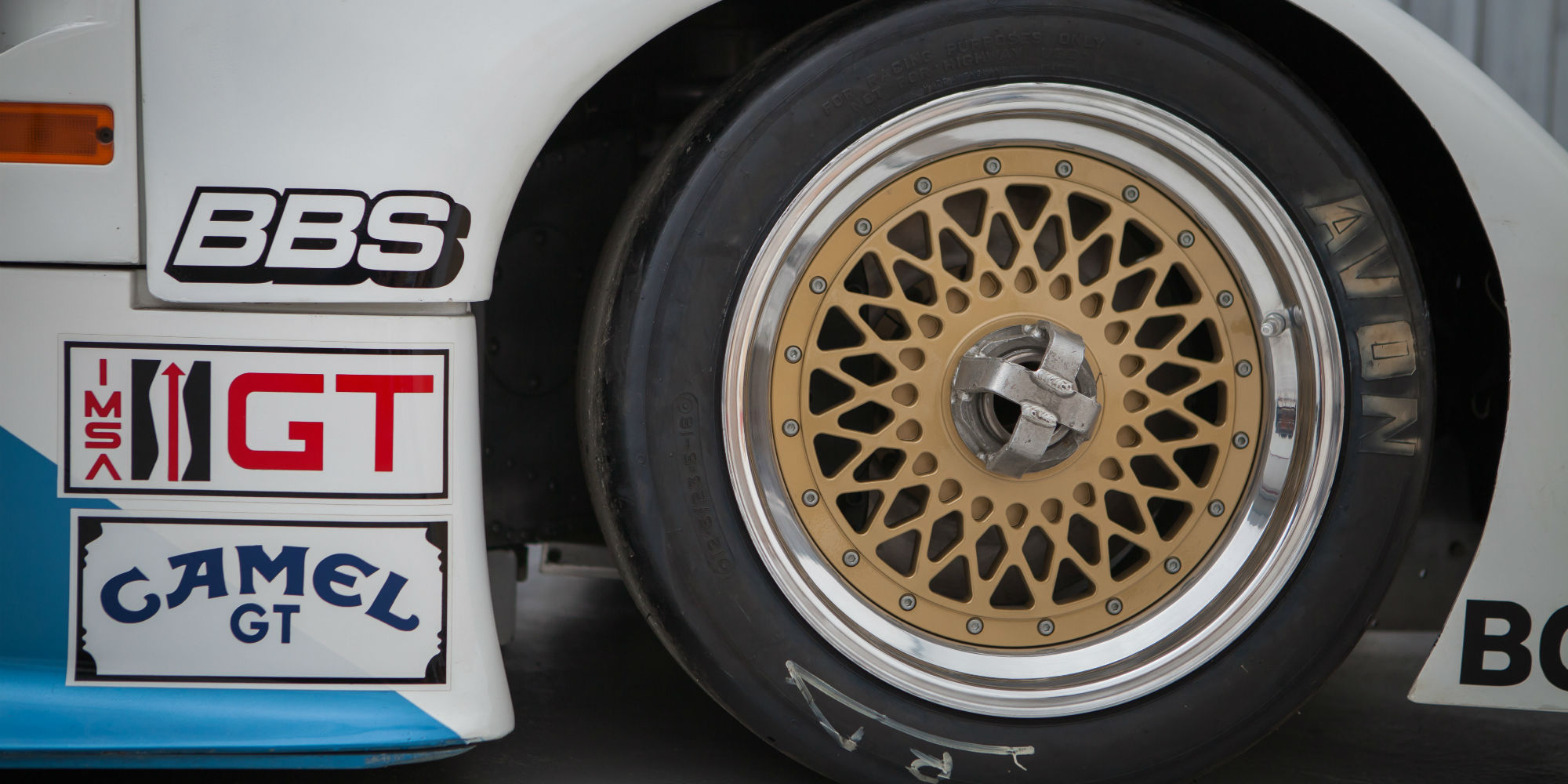 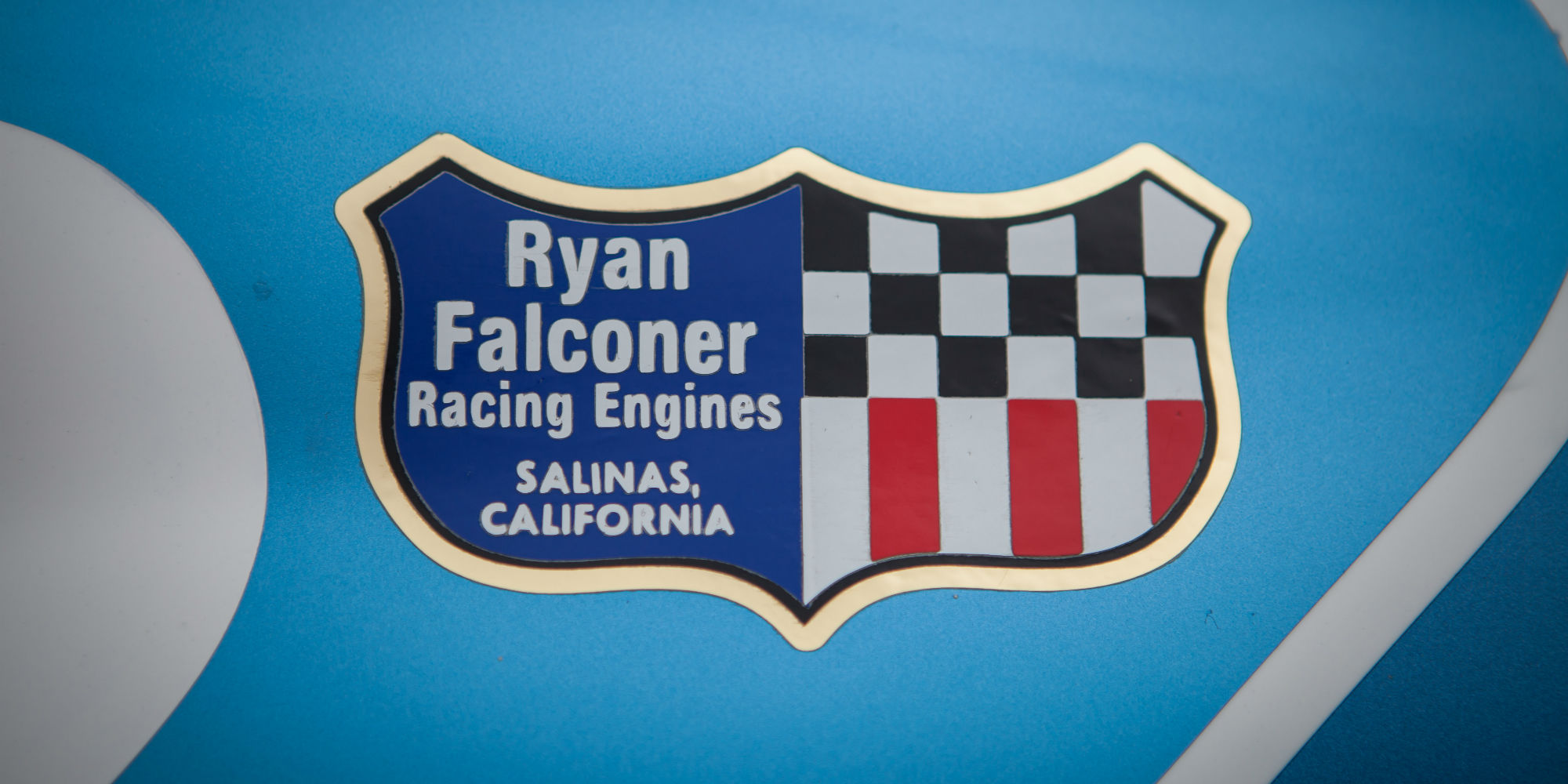 The Primary Car in the 1984 IMSA Championship Winning Season,

March’s foray into sports prototype racing was aided by the services of experience and youth combined. One Adrian Newey redesigned an earlier March sports prototype under the wise eye of Robin Herd to form the 82G, a challenger for the USA based IMSA GTP series. With a few differences to the World Championship Group C regulations, GTP rules didn’t limit fuel available during a race, but rather set a minimum weight limit depending on the engine capacity of each car.

Part of the reasoning behind IMSA’s split from the Group C regulations was to open the category up to more than just Porsche, who at the time were dominating in Europe with their production based engine in the 956. Newey’s monocoque design allowed for the fitment of a wide range of engines, making it a very popular customer choice in the United States. The new 82G featured a body which incorporated huge venturi to create a large amount of downforce.

The 82G was developed with strong promise in ’82 including qualifying on pole for the Daytona 24 Hours with Chevrolet power. Lessons learnt through the ’82 season were incorporated into the 83G by Herd, Newey and the team at March. A Porsche engined 83G proved highly successful for Al Holbert, with him winning every race he did that season and taking the IMSA title. For 1984, another design revision led to the 84G, an example of which we are proud to offer for sale today.

Lanier would team up with 1979 Le Mans 24 Hours winner Bill Whittington for the majority of the season, and 84G-4 became their primary car. Despite being entered for the Road Atlanta 500km in early April, the race debut for 84G-4 was at the Riverside 6 Hours at the end of the month. Running with race number 56, Lanier and Bill Whittington qualified 2nd ahead of Al Holbert and Derek Bell’s Lowenbrau Porsche 962. Lanier and Whittington went on to take the race win after 6 hours by just five seconds over Holbert and Bell.

The next outing for 84G-4 was the Laguna Seca 100 Miles on the 6th May. For this shorter event, Lanier and Whittington drove separate cars, with Lanier in 84G-4 and Whittington in the 83G. Lanier qualified in 5th, and then proceeded to head through the field and won the race by a narrow three seconds over the Red Lobster Racing March 83G.

On the 20th May, Lanier, Whittington and 84G-4 went to Charlotte Motor Speedway for the Charlotte Camel GT500. This time it was Holbert/Bell’s Porsche 962 who took the pole position, with Lanier and Whittington hot on their heels in second place. The Blue Thunder 84G-4 went on to have it’s most convincing victory yet, this time having a margin of 3 laps over the second placed Bob Tullius in his Jaguar XJR5.

From Charlotte, the Blue Thunder Racing team travelled to Lime Rock for the 1 hour Coca Cola 500, held the week after. Again, for the sprint race distance, Lanier and Whittington drove single-handedly, with Lanier in 84G-4. Whittington took pole position and Lanier was close behind in second place, making it a front row lock-out for Blue Thunder Racing. In the race, the Kreepy Krauly March 83G took the win on a wet track, with Lanier a minute behind in second place.

The 8th July saw the Watkins Glen 6 Hours, and a second place grid position for Lanier and Whittington in 84G-4. In the race, they didn’t fare so well with a gearbox failure resulting in a retirement, the first for 84G-4.

At the end of July, Lanier and Whittington took 84G-4 to Portland for the G.I. Joe’s Grand Prix. Second place was taken in qualifying very close behind the Porsche engined Kreepy Krauly 84G. In the race, 84G-4 went on to take another convincing victory, six seconds clear of Tullius’ Jaguar XJR5.

On the 5th August, it was to Sears Point for the 100 miles. Again for this short race distance, Lanier and Whittington drove separately with Lanier taking the controls of 84G-4. Lanier qualified in 4th while Whittington took pole position with the 83G. In the race, Lanier went on to finish 7th, a lap down on the winner, Whittington.

Later in the month at Road America, the two paired up for the Budweiser 500 in 84G-4. They qualified the Blue Thunder Racing March in 2nd, just a fraction behind Holbert and Bell’s Porsche 962. At the end of the 500 mile race, Lanier and Whittington finished in 3rd, behind the pole sitting 962 and the similar car of Bruce Leven and David Hobbs.

At Pocono Motor Speedway in early September, Lanier and Whittington took 84G-4 to pole position, with six tenths advantage over Holbert and Bell in their 962. In the race, they retired before the finish yet were still classified 5th. It was a return to form at Michigan a week later when the pairing qualified second in 84G-4 for the 500 kilometres. Lanier and Whittington went on to take the race win by two laps over the Red Lobster Racing 83G.

The penultimate round of the IMSA season was held at Watkins Glen on the 30th September. Called The New York 500, 84G-4 was qualified by Bill Whittington where he took pole position ahead of Holbert and Bell’s Porsche 962. On this occasion, Lanier shared with Bill’s brother Dale in the team’s 83G, qualifying third. In the race, Bill Whittington retired 84G-4 while Dale and Lanier went on to take victory.

By the season finale at Daytona for the 3 Hours, Randy Lanier and Blue Thunder Racing had clinched the IMSA Camel GT title, a mighty achievement for the relatively small team. 84G-4 was adorned with the number 1 and was driven single handedly at Daytona by Bill Whittington, qualifying third before retiring with transmission problems.

For the Miami 3 Hours in February 1985, 84G-4 was loaned to Ralph Sanchez Racing for Emerson Fitipaldi and Tony Garcia to race with Spirit of Miami and Farm Stores sponsorship. The pairing qualified 4th and went on to finish the race in third position.

84G-4 returned to normal Blue Thunder Racing service with Lanier and Bill Whittington for the Sebring 12 Hours in April 1985. Still sporting number 1, the 84G qualified 4th and ran well in the race until retirement was forced by engine failure. The season closing Daytona Finale 3 Hours, was not only the finale for 1985, but for 84G-4’s contemporary racing career. Lanier and Whittington were joined on this occasion by Irishman Michael Roe. The trio qualified 14th and raced through to a fifth place finish.

Lanier had decided to focus his main efforts on Indycar by 1985, with the aim of winning the Indianapolis 500 and 84G-4 remained with the team. However, the public success of Blue Thunder Racing, a small amateur team, against the Group 44 Jaguars and Lowenbrau backed Porsche 962 effort, had started to raise questions. Lanier was soon under investigation by the FBI, as were Bill and Don Whittington, and Ben Kramer of Apache Power Boats.

A week before Lanier was due to compete in the Indy time trials, Bill Whittington was arrested and Lanier’s name began being mentioned. Lanier made the Indy 500, and shortly after apparently made his largest haul of 165,000 lbs of marijuana after which he considered retiring. After others in the circles had been arrested, Lanier was convicted of importing and distributing over 300 tons of Colombian marijuana, at which time he disappeared.

At the time it was believed that he had fled to Puerto Rico but had first gone to France before then going into hiding in Monaco. After Monaco, he went to Antigua but was caught and arrested while fishing. Lanier was sentenced to life without parole when he refused to testify against Jack Kramer, Ben Kramer’s father. By the end of 1988 both Lanier and Ben Kramer were in prison.

84G-4 was seized by the FBI in October 1987 and in the following year Turky Burky’s Auto Sales bought the March from the U.S. Government in October 1988. The transfer of ownership was done, listing the General Services Administration, Personal Property Center, Kennedy Space Center as the previous owner. By November ’88, 84G-4 had been bought by Jim Briody, New Jersey.

Over the next couple of years, Briody and his wife Patricia were persistent in obtaining further information on the 84G-4, which they eventually managed and the correspondence remains in the history file today. The Briody’s also owned and raced 84G-2 at this time, which ran with a Buick V6. Both cars came to the U.K. in 2007 and 84G-4 was bought by Chris Goodwin, through John Starkey.

Chris set about going through 84G-4 in his ownership but did not race the car before advertising it for sale. In 2015, 84G-4 was bought by the current owner who tasked Forward Motorsport with preparing the car. A full rebuilt was undertaken, with the car being stripped down to the bare tub before being put together with new parts where necessary.

The 5800cc Chevrolet V8 went to Kenny Coleman of EDA Racing for rebuild, and now produces 580hp and 550lb/ft. The Hewland DG gearbox was taken to Hewland Classic to be rebuilt, and as such the car remains with 0 hours on these components.

Accompanied by history file including original correspondence with the FBI, set of wheels with wet tyres and two spare wheels with slicks mounted. The March 84G-4 presents an opportunity to acquire a significant part of the historic Blue Thunder Racing, IMSA GTP championship winning team and an immersed part of the ‘80s narcotic entwined IMSA story. A very accessible and competitive choice for the Historic Group C series, which includes Le Mans Classic for 2018.