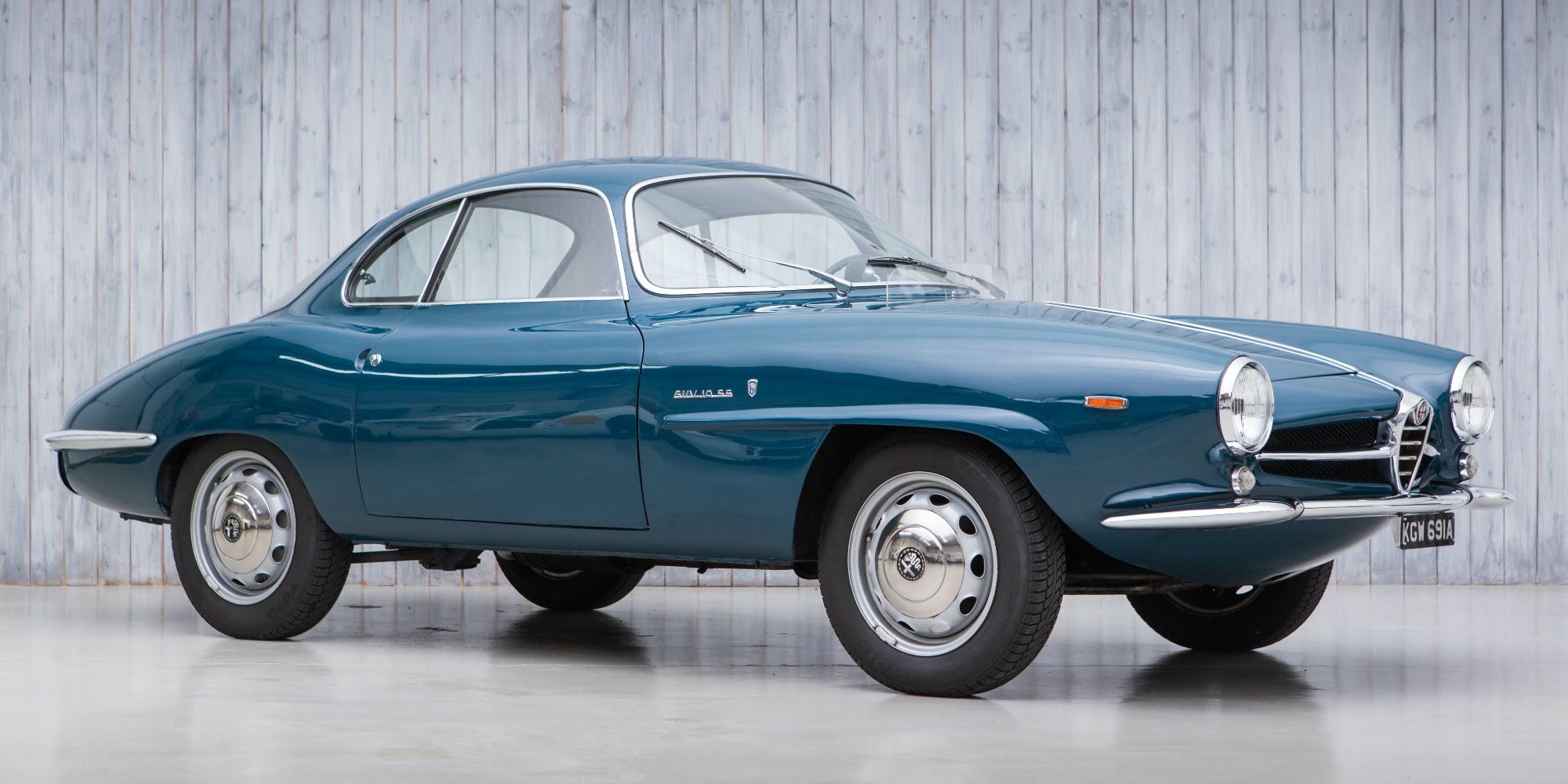 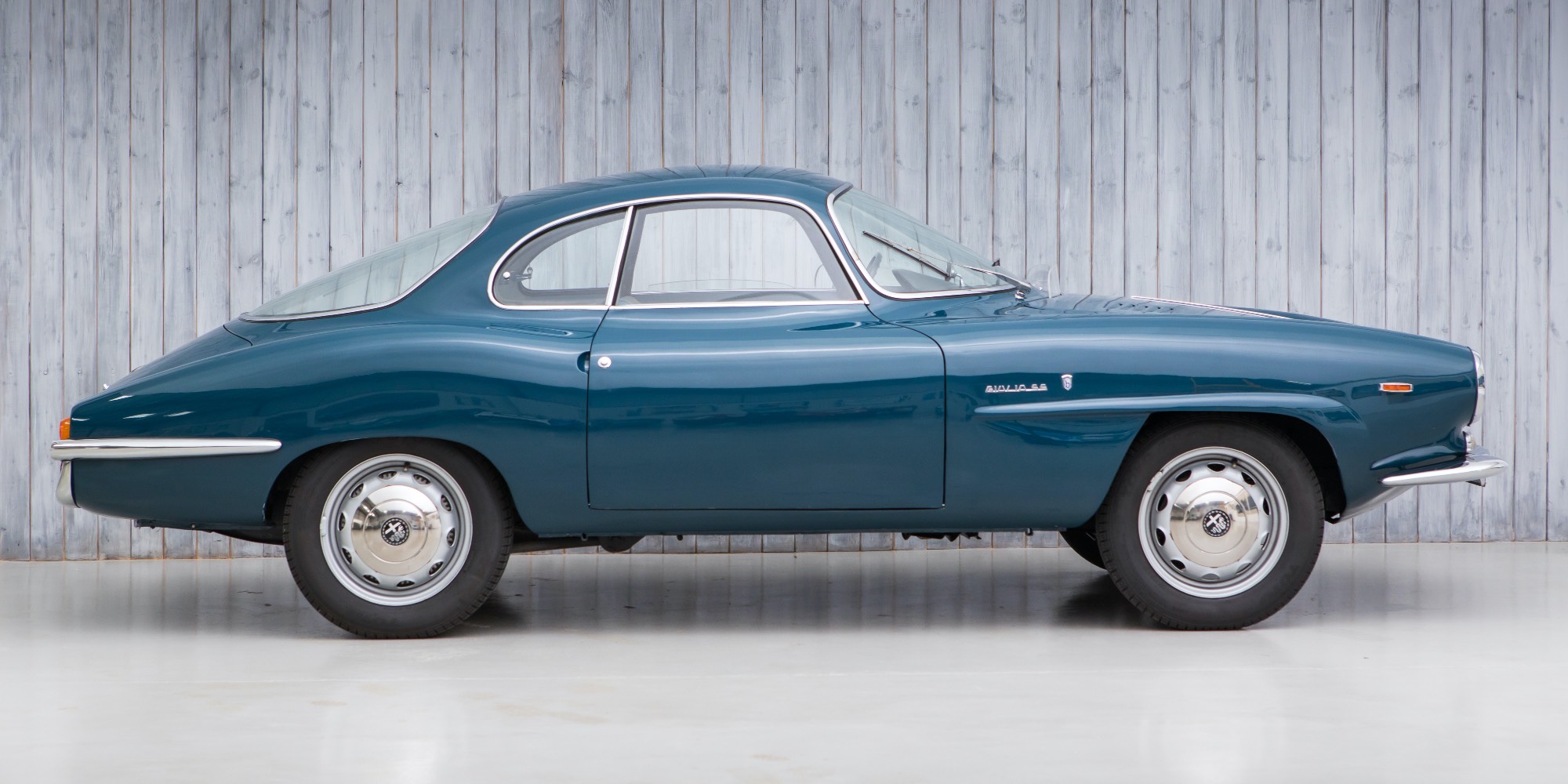 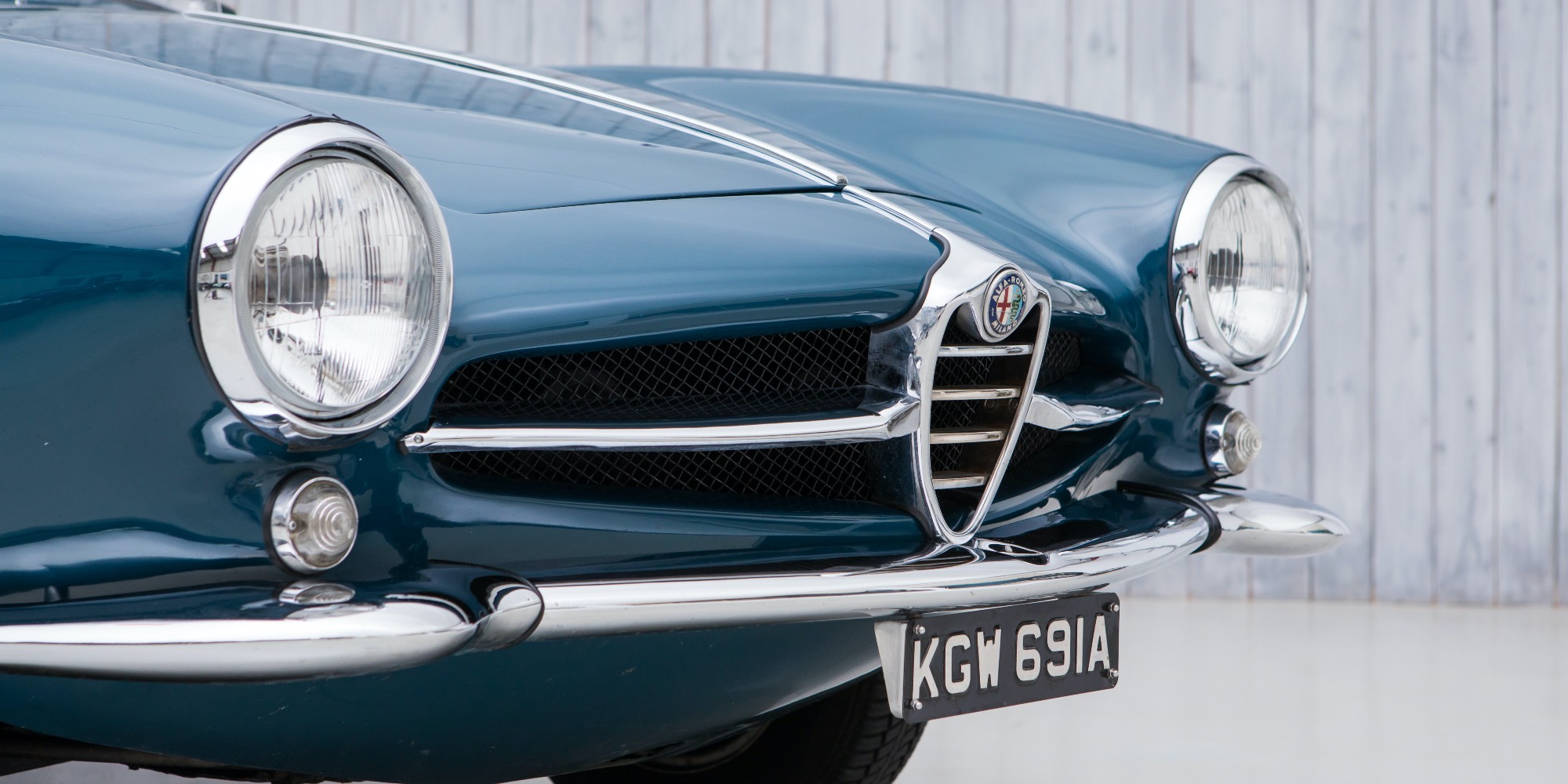 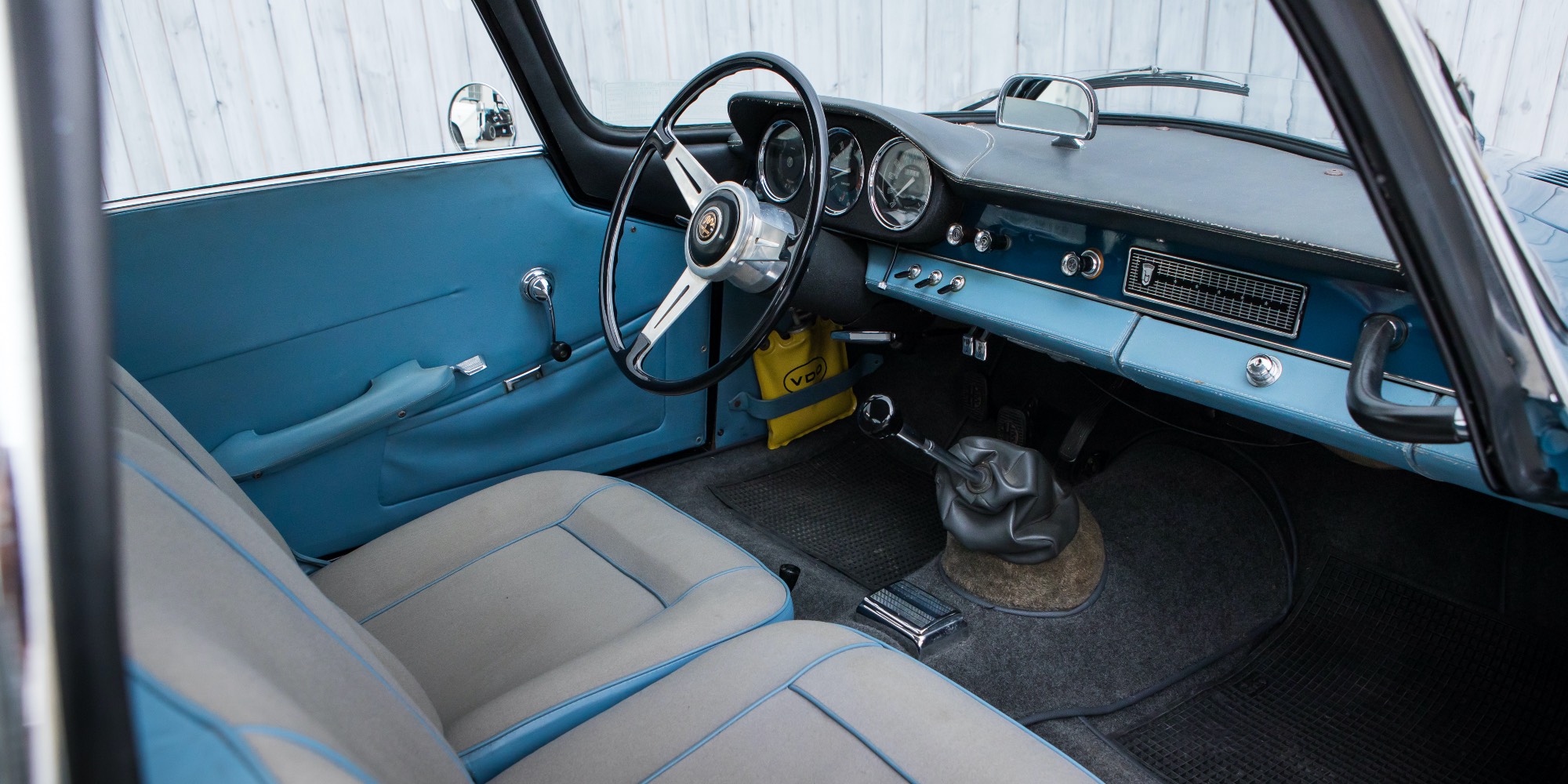 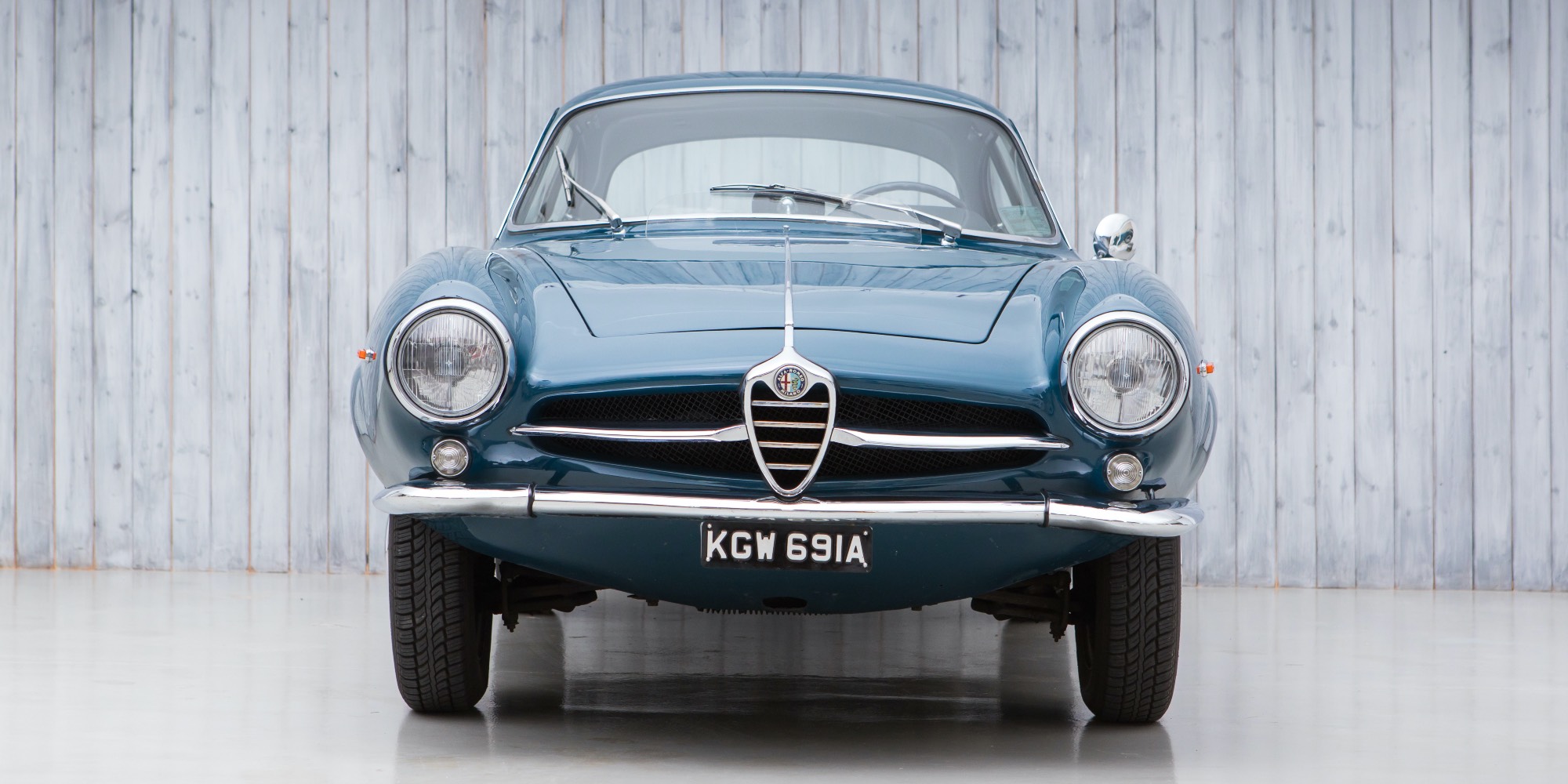 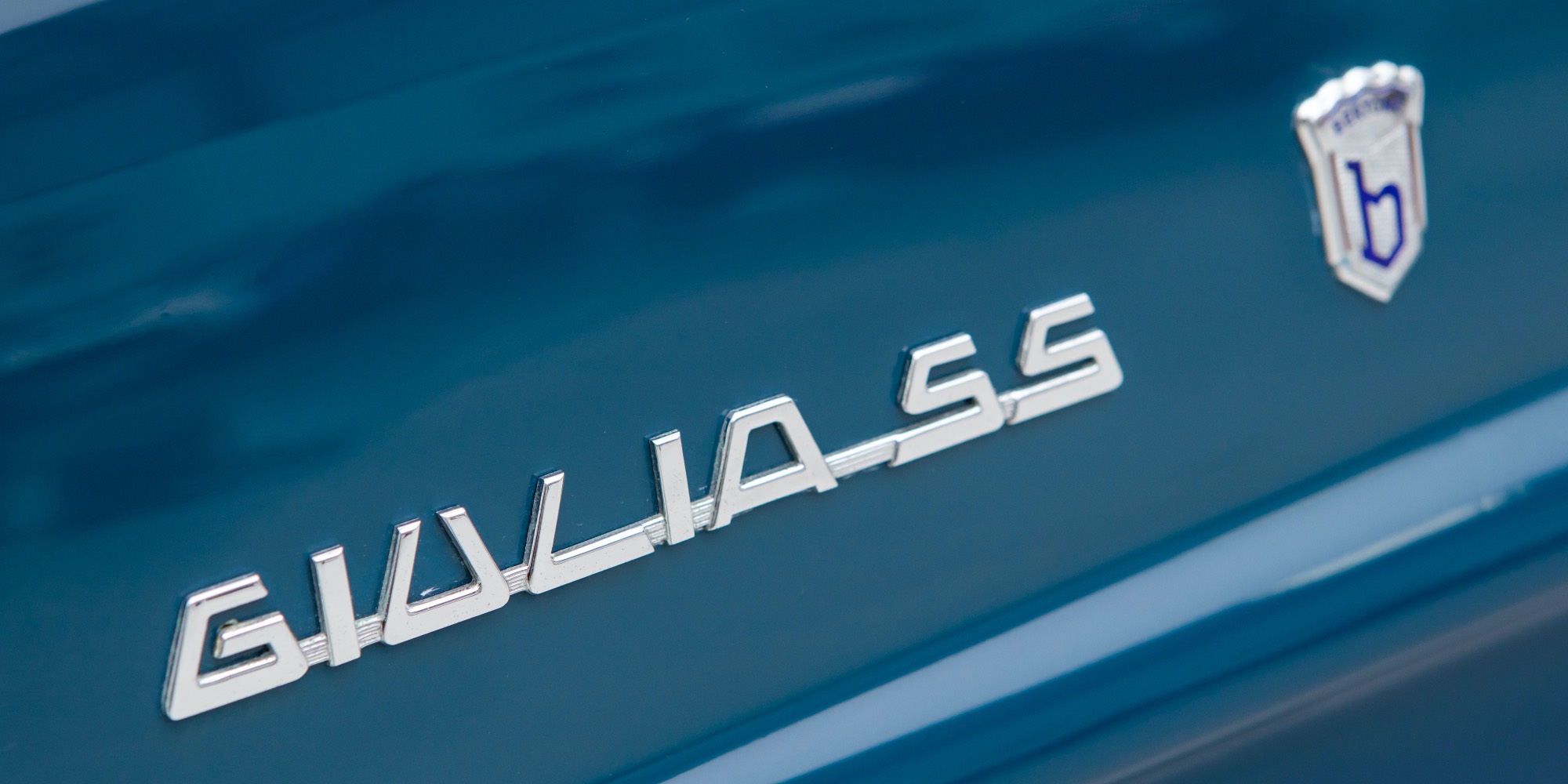 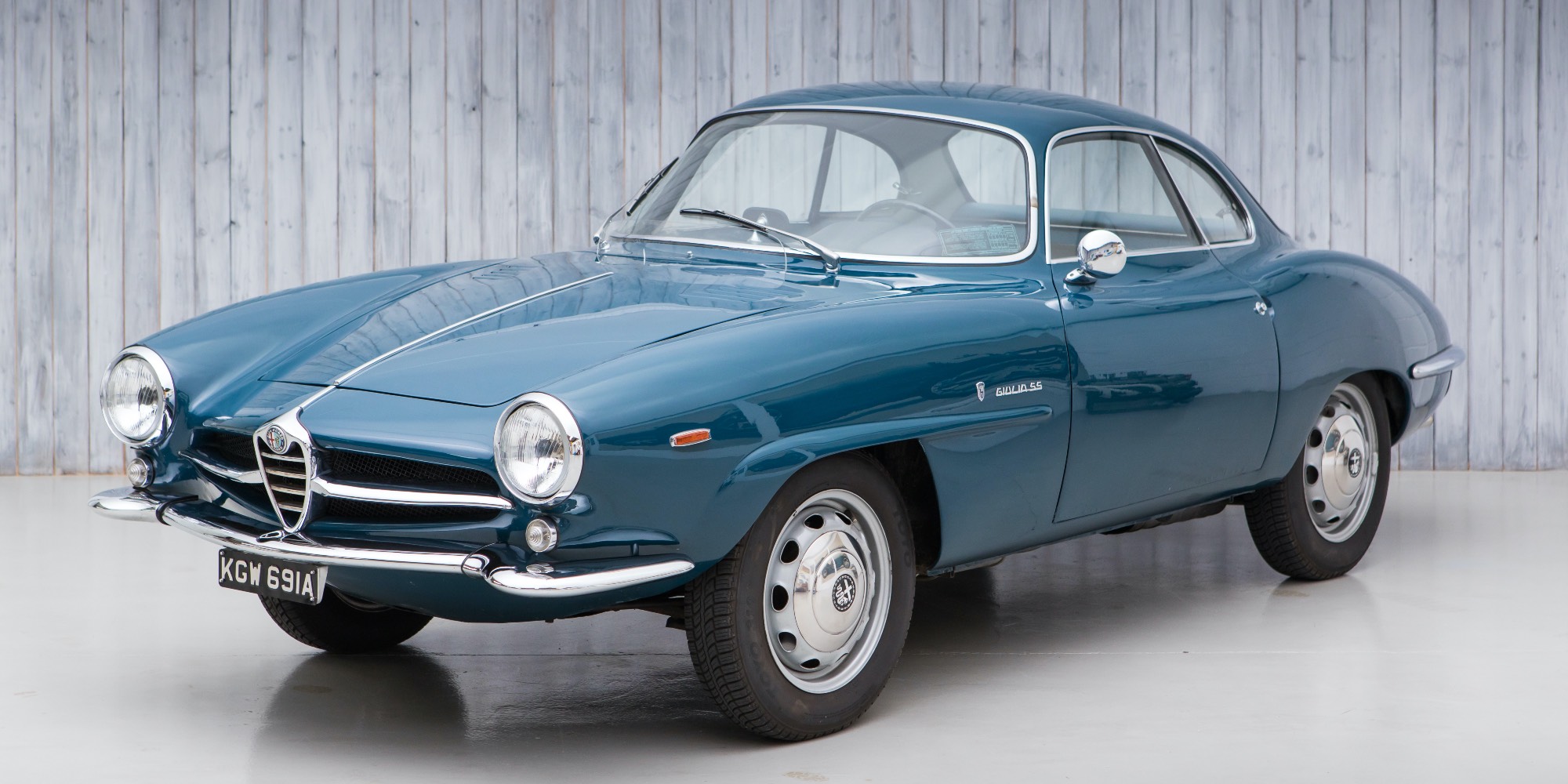 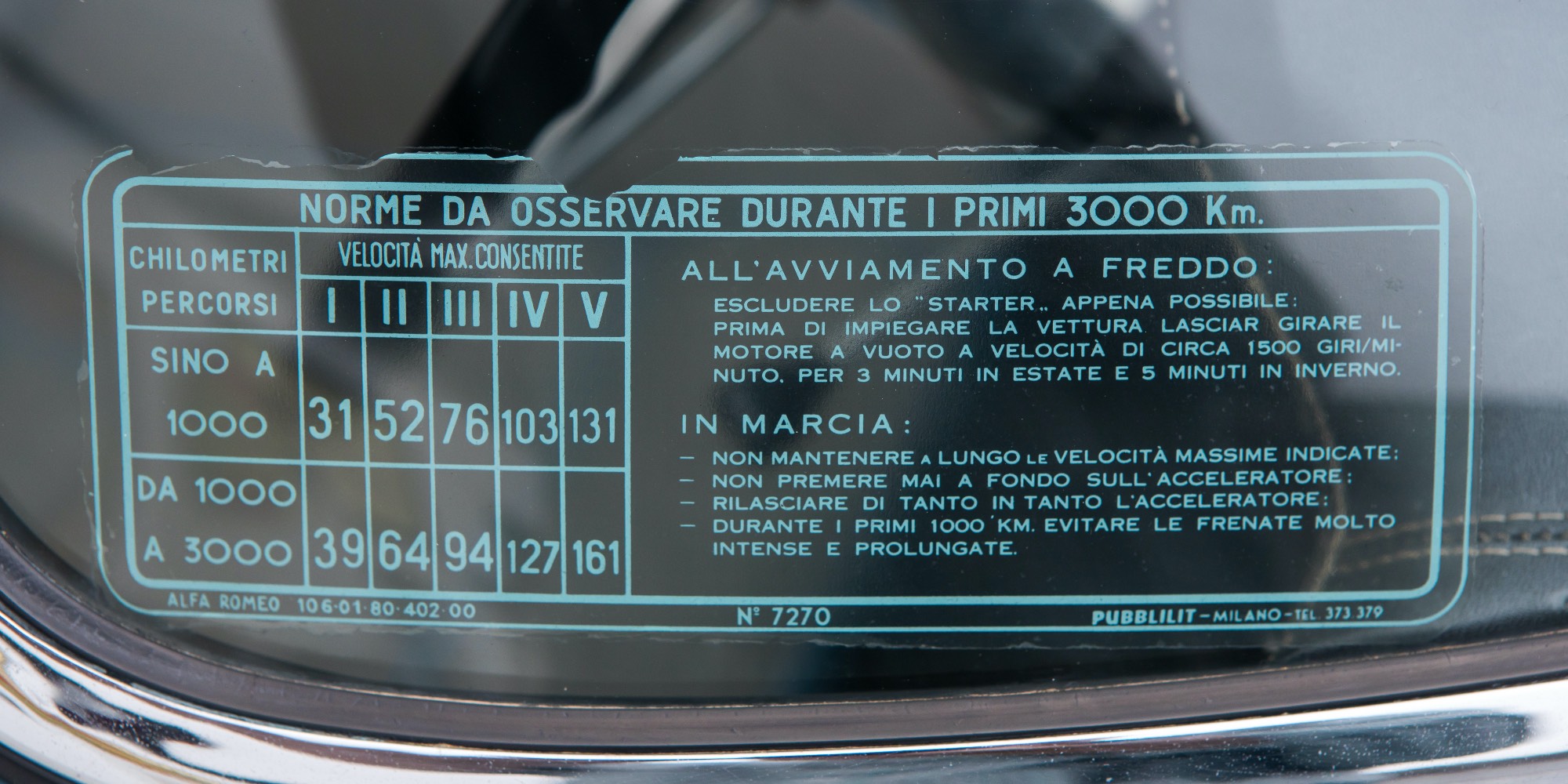 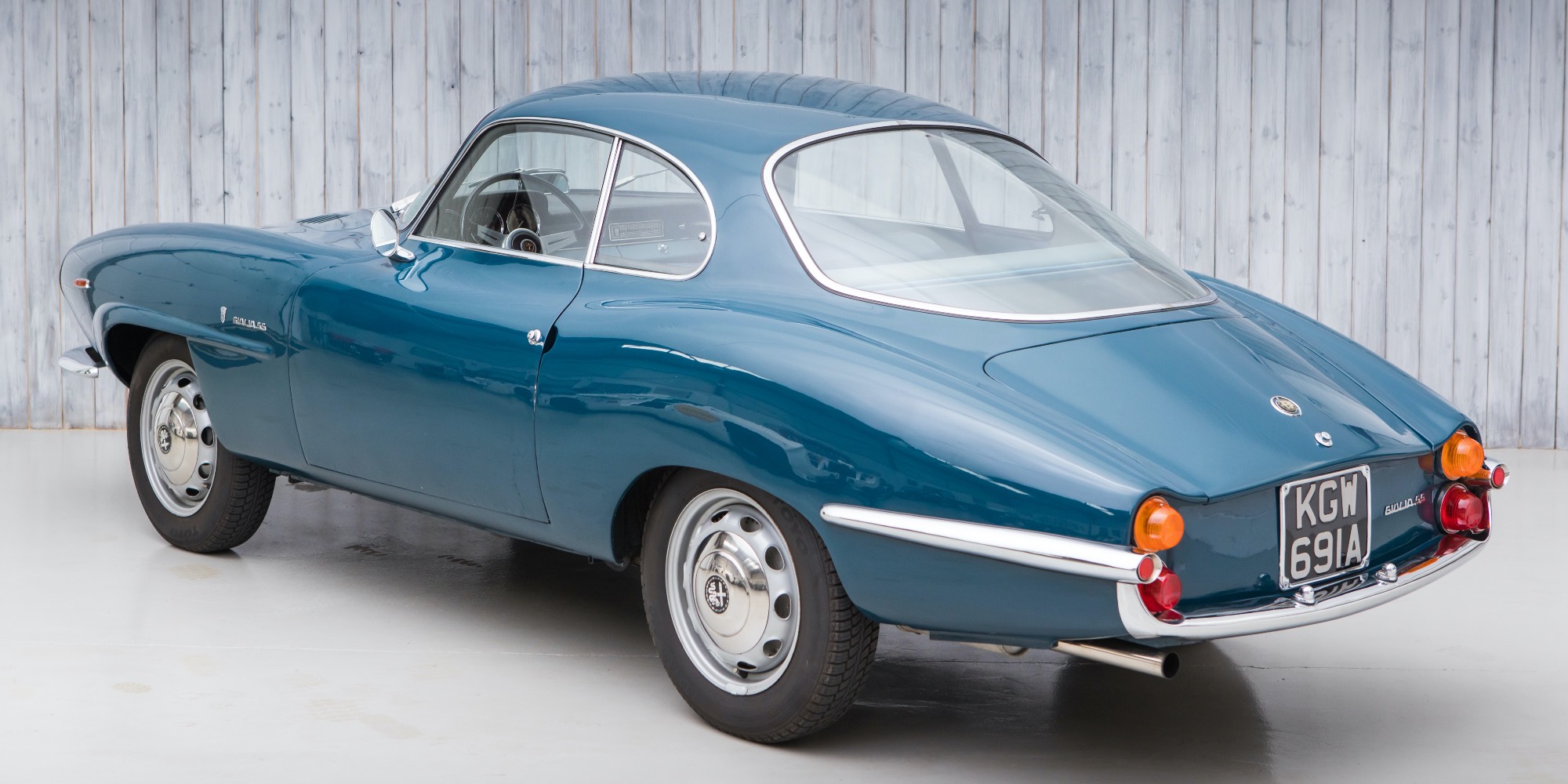 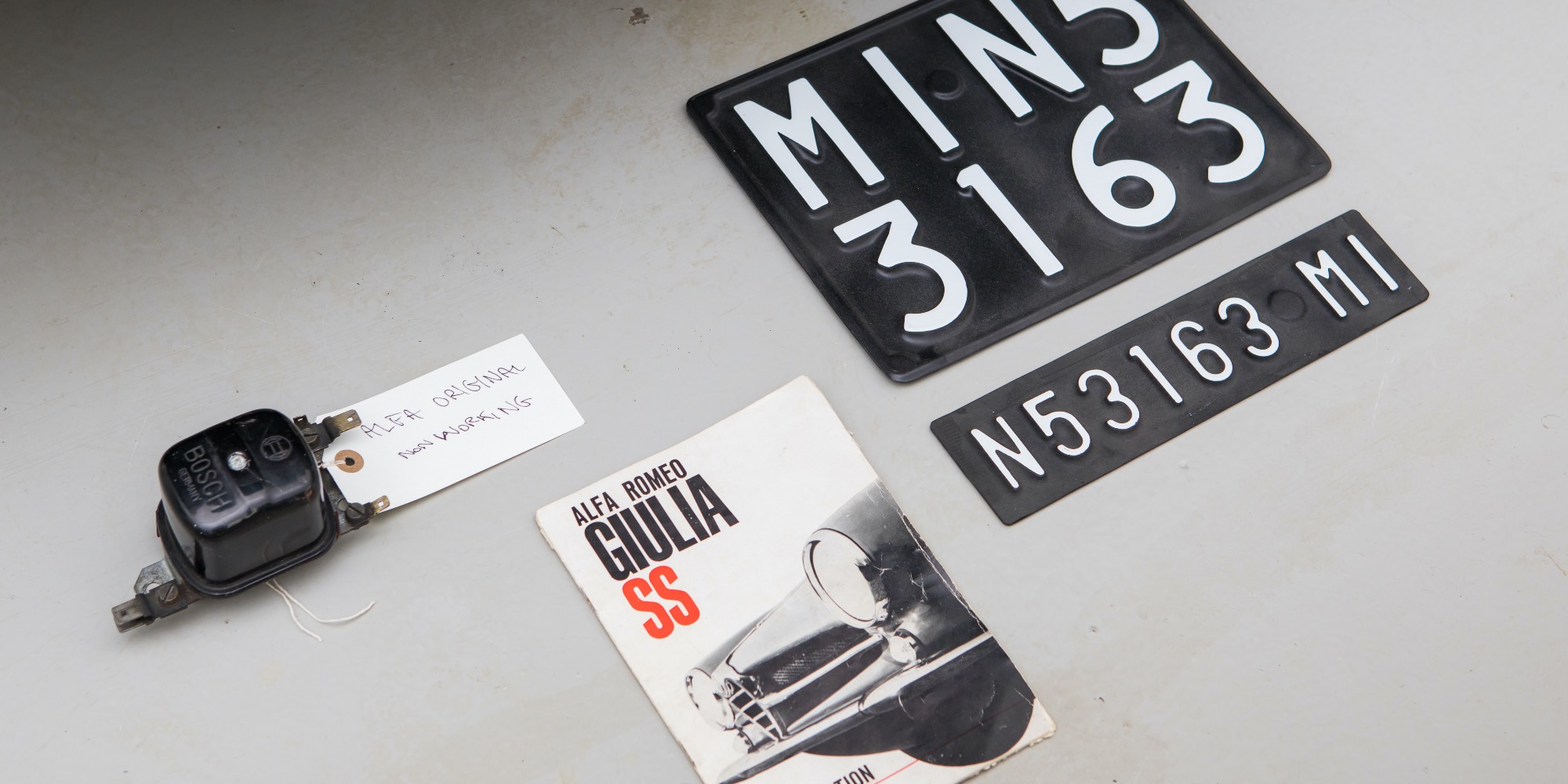 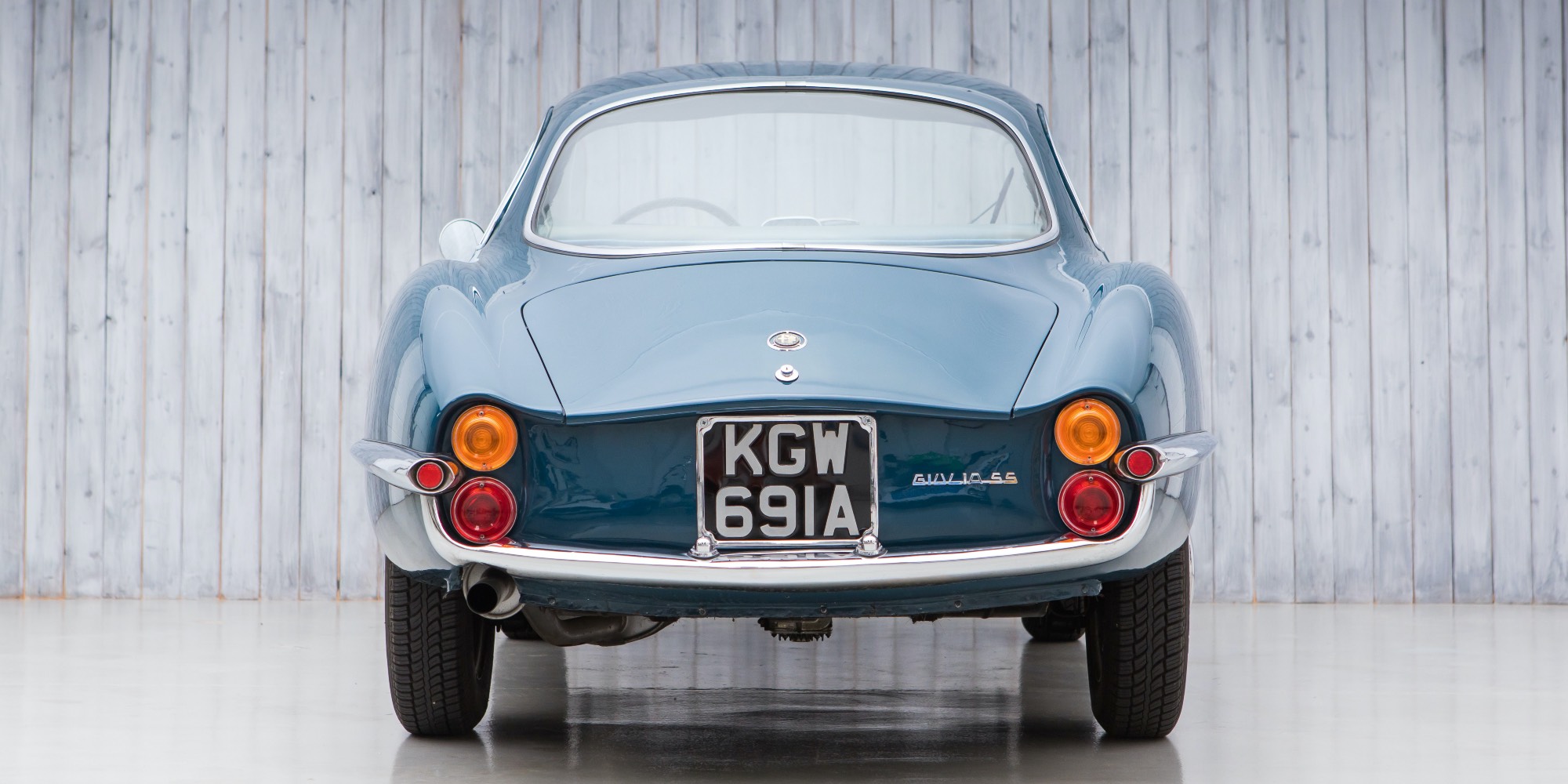 Having begun in 1954, the 1300cc Giulietta range embodied the ethos of ‘small car, big performance’, the successor to which came about in 1962 with the launch of the 1600cc Giulia. Many evolutions followed in the series, and from the Giulia Sprint GT came the GTA. The GTA, with the A standing for Alleggerita, or lightweight in Italian, was introduced in 1965 and was the official competition version of the Giulia Sprint GT, which brought strong results for the Quadrifoglio marque.

At the top of the road based range was the stunning Giulia Sprint Speciale. Designed by legendary Bertone chief Franco Scaglione, the Guilia SS’s aerodynamic form was developed in the wind tunnel and bears obvious resemblance to the famed trio of BAT concept cars. With front disc brakes and the 1600cc Alfa Romeo twin cam engine breathing through twin Weber carburettors, the Gulia SS weighed just 950kg and yielded an impressive top speed of 125 mph.

This car, chassis number AR*380576* was completed by the Alfa Romeo factory on the 23rd November 1963, understood to have been in dark blue with grey and blue cloth interior. Sold to it’s first owner Giovanni Perfetti on the 10th December 1963, 380576 was registered PC 60782 and resided in Piacenza.

From Perfetti, 380576 was bought by Luigi Germimario of Milan in the late 1960s and registered MI N53163 in September 1971. In June 1973, a change of address for Germimario was logged in the registration document, of which a copy remains in the file today.

380576 passed to Germimario’s grandson and remained in the same family for over 40 years. It is noted that 380576 was always been looked after, receiving only a repaint and engine overhaul in around 2011, after which it is thought to have covered only 5000km. 380576 also took part in the Tuscany Classics event in the time after this work, covering 1500km without trouble.

After a brief ownership with Iron Motors S.r.l. in Magione, Italy, 380576 was sold by Bonhams to its current owner at the 2015 Goodwood Revival sale. Most recently, having been road registered KGW 691A in England, 380576 has benefitted from the replacement of the dynamo and regulator, and currently shows 87,347km on the speedometer.

Today, 380576 is understood to retain its original engine, along with a plethora of original details including the stamping, interior, Securit glass, window stickers and manufacturer labels, crayon markings on the rear of the seats, jack, instruction book and Milanese number plates.

An attainable icon of Italian Bertone design, the Giulia SS has been enjoyed by the current owner and awaits the road with its next custodian.