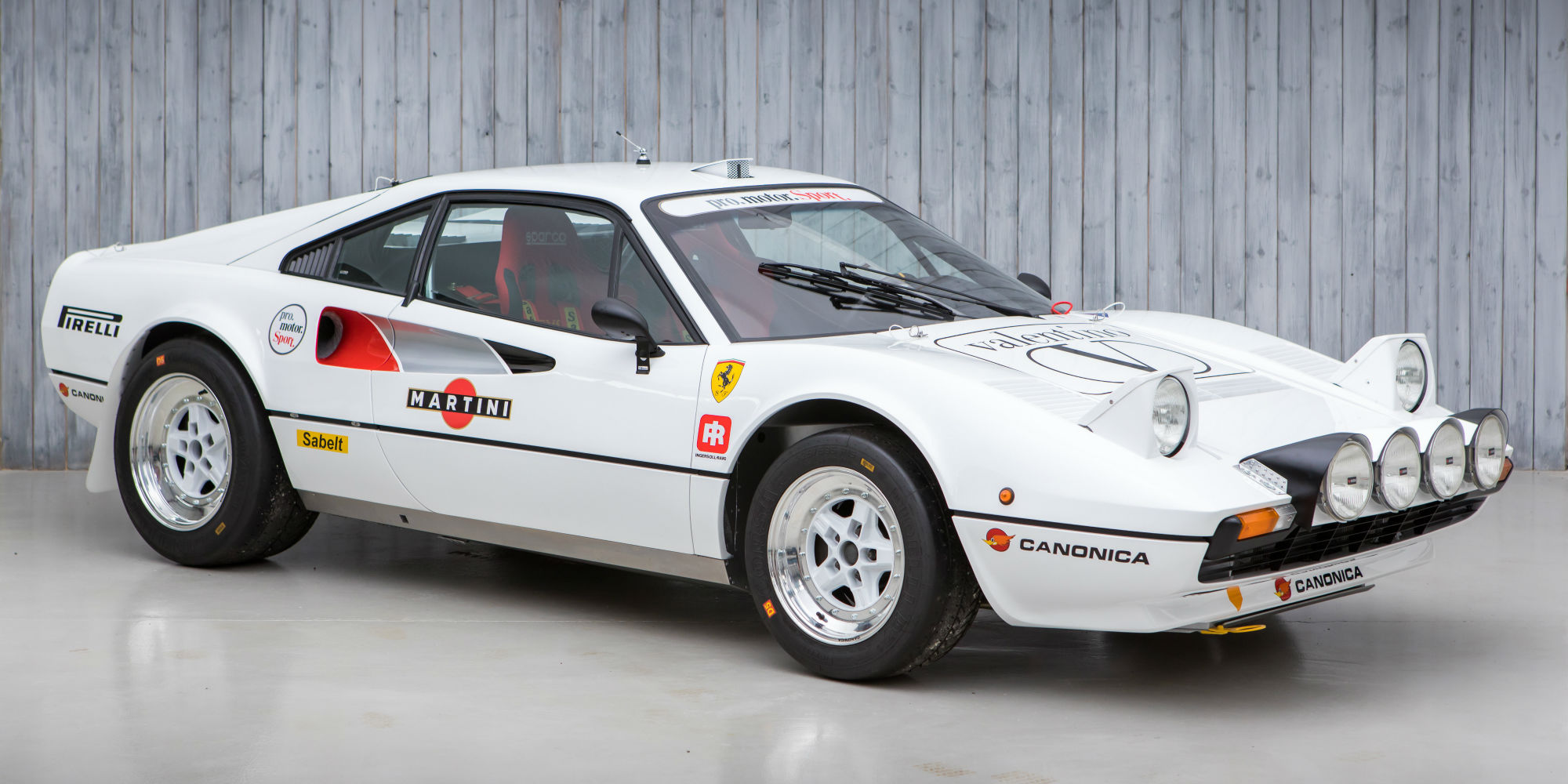 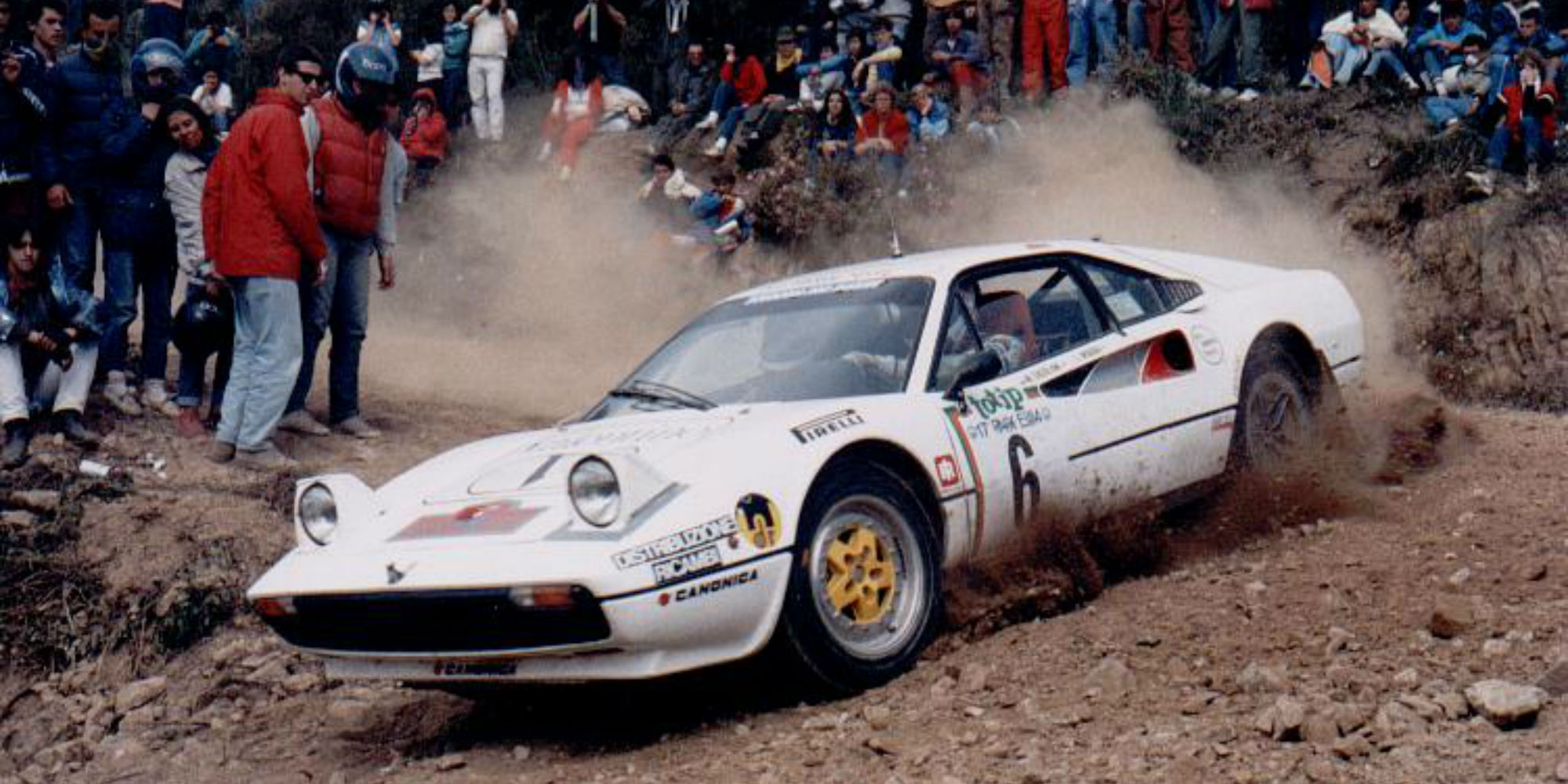 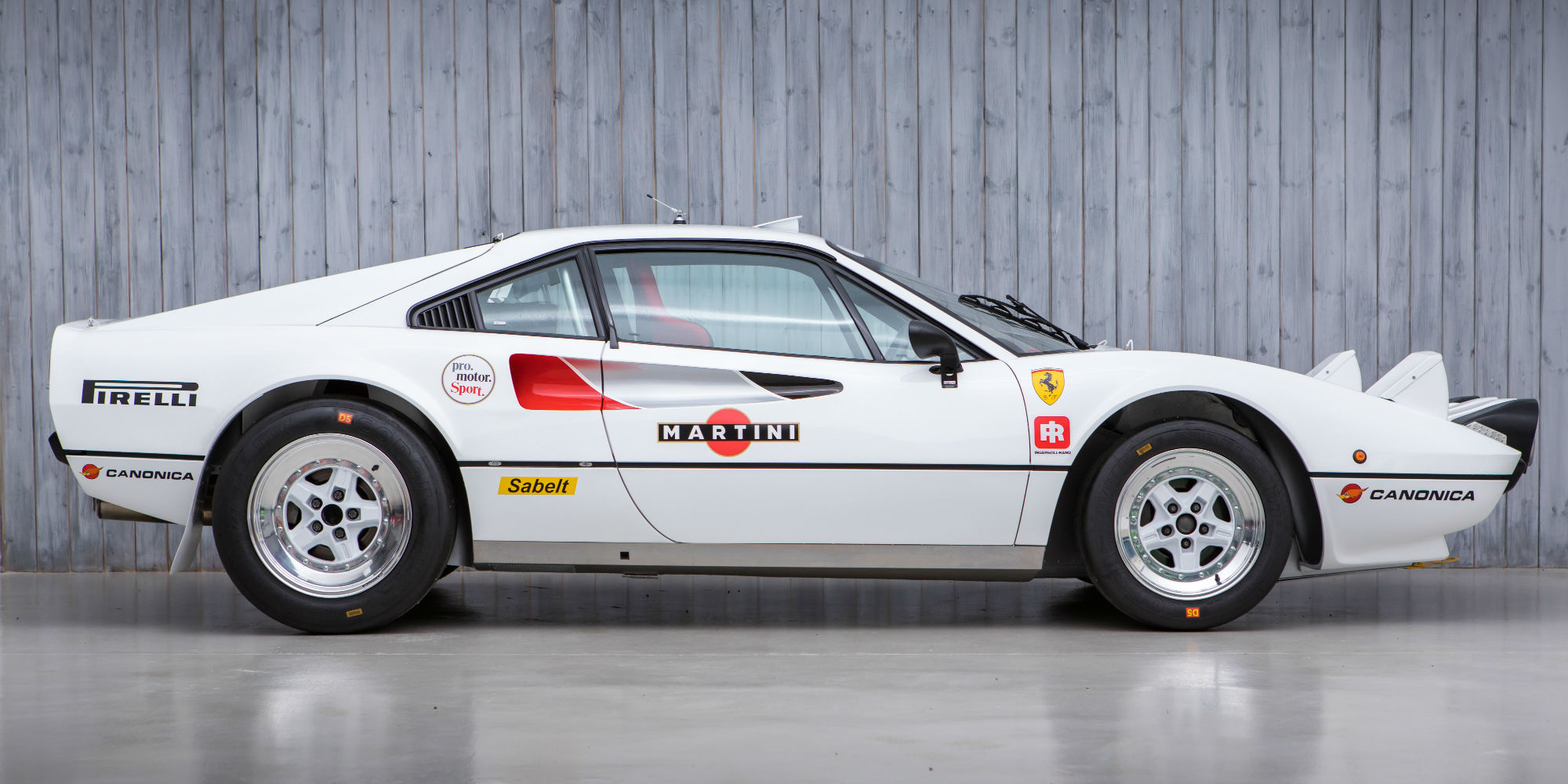 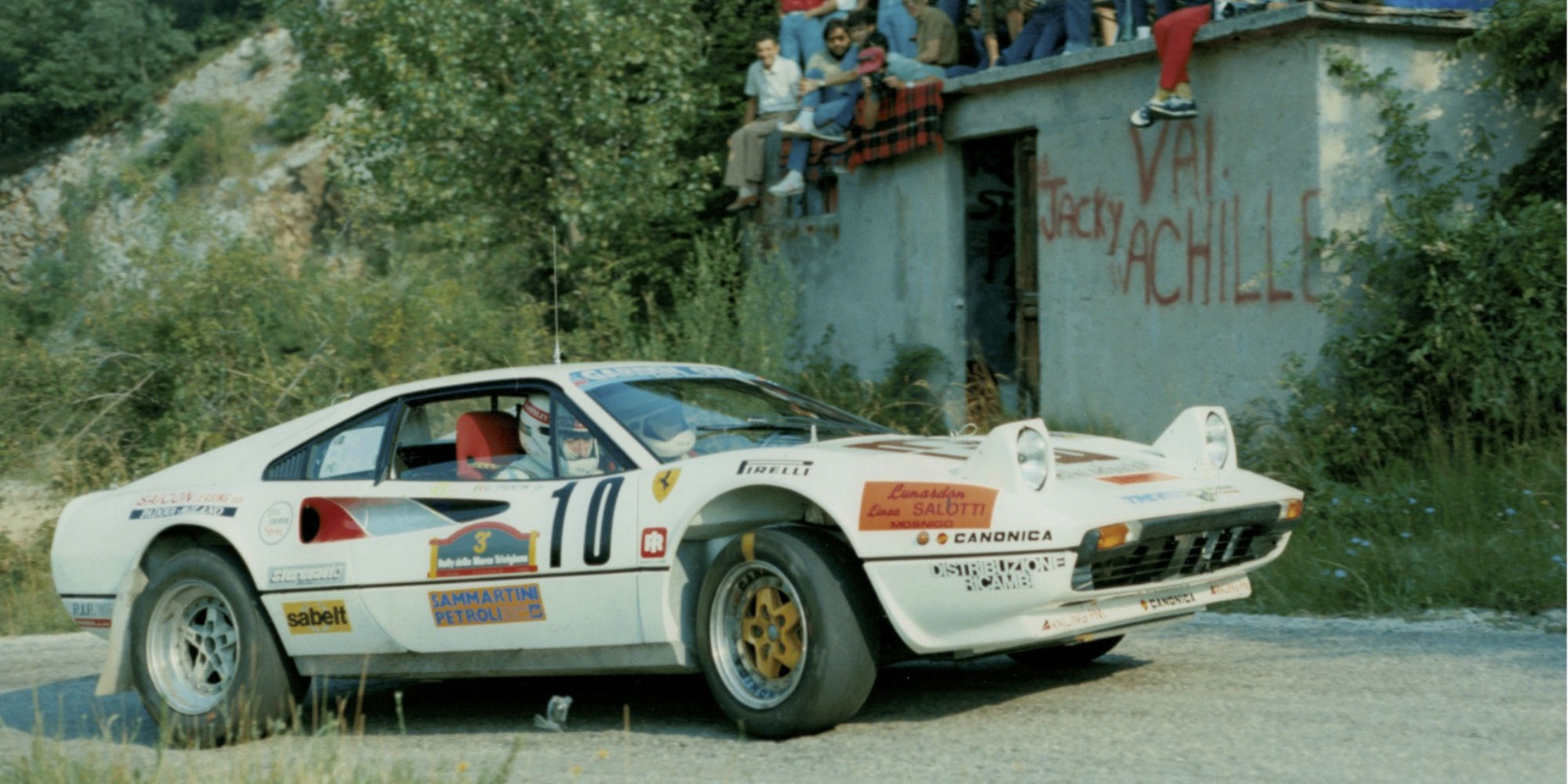 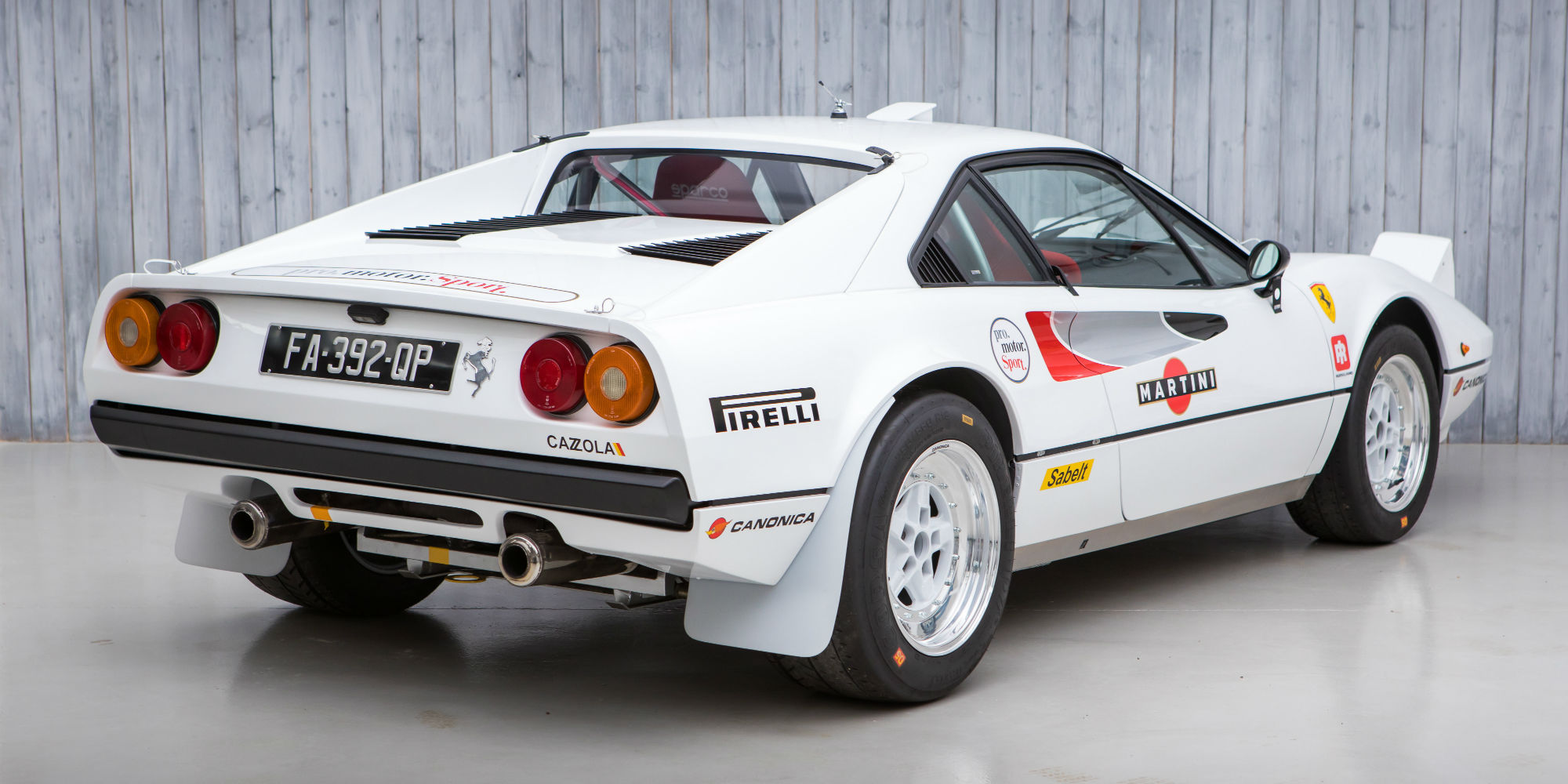 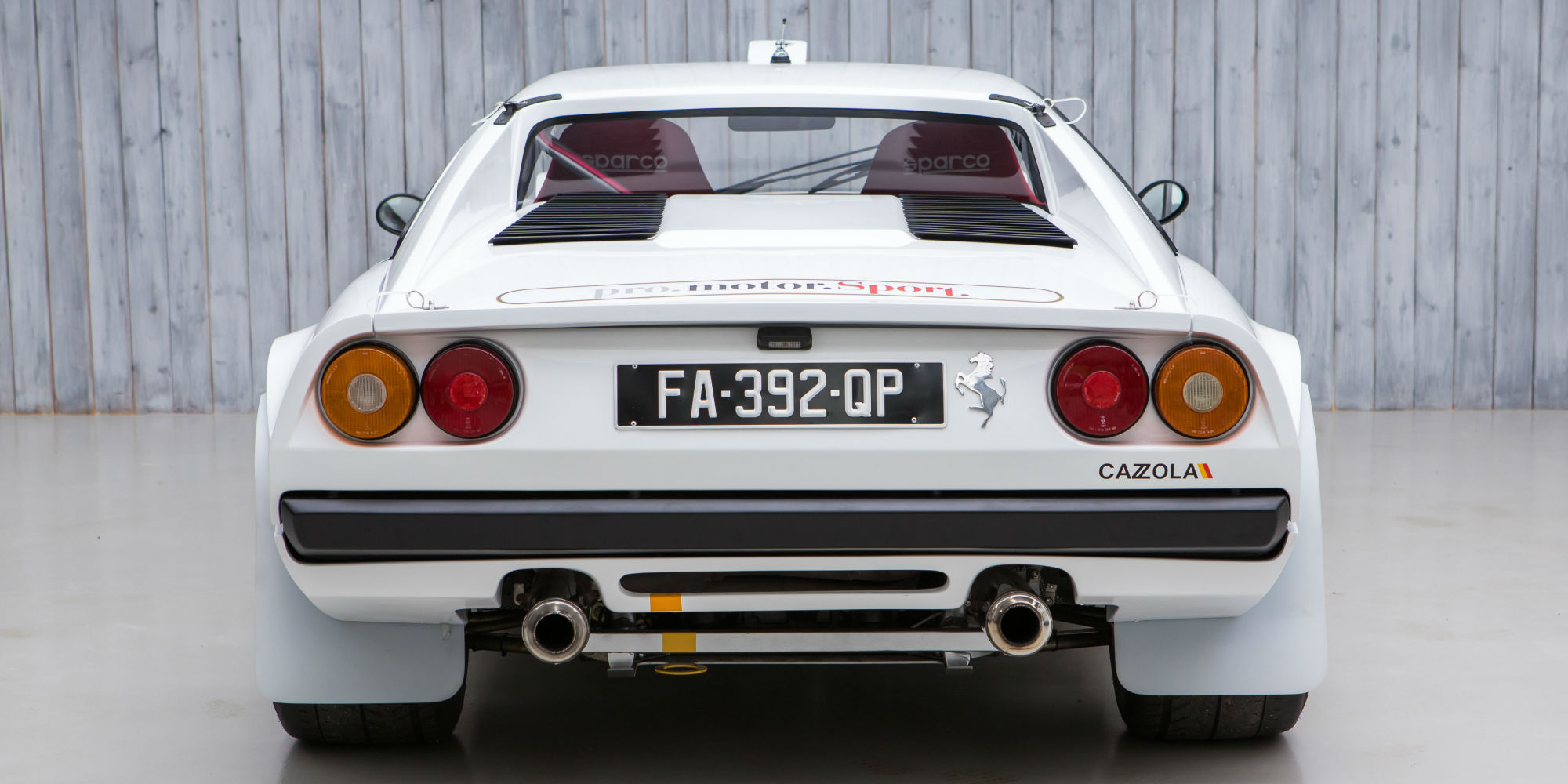 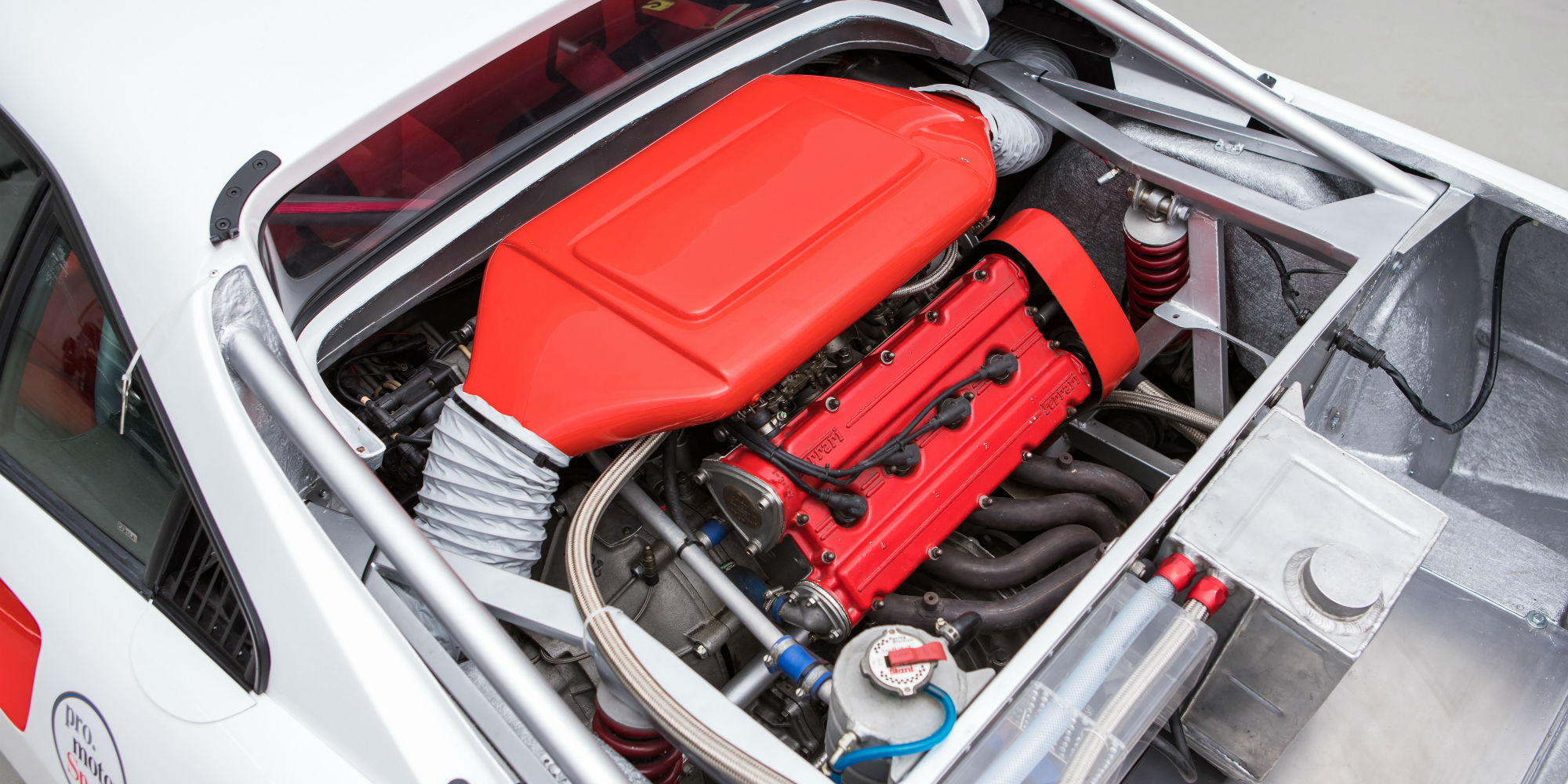 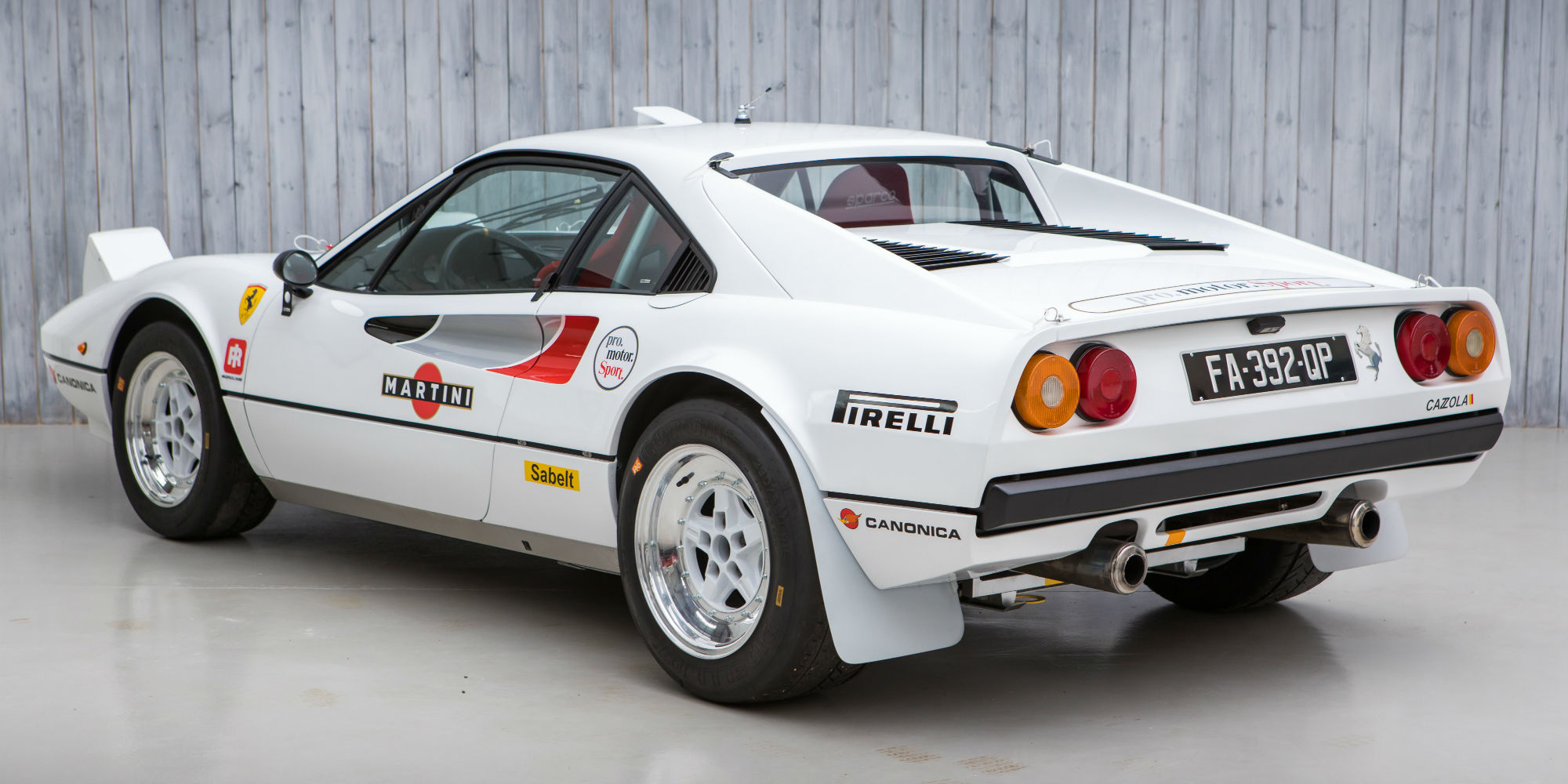 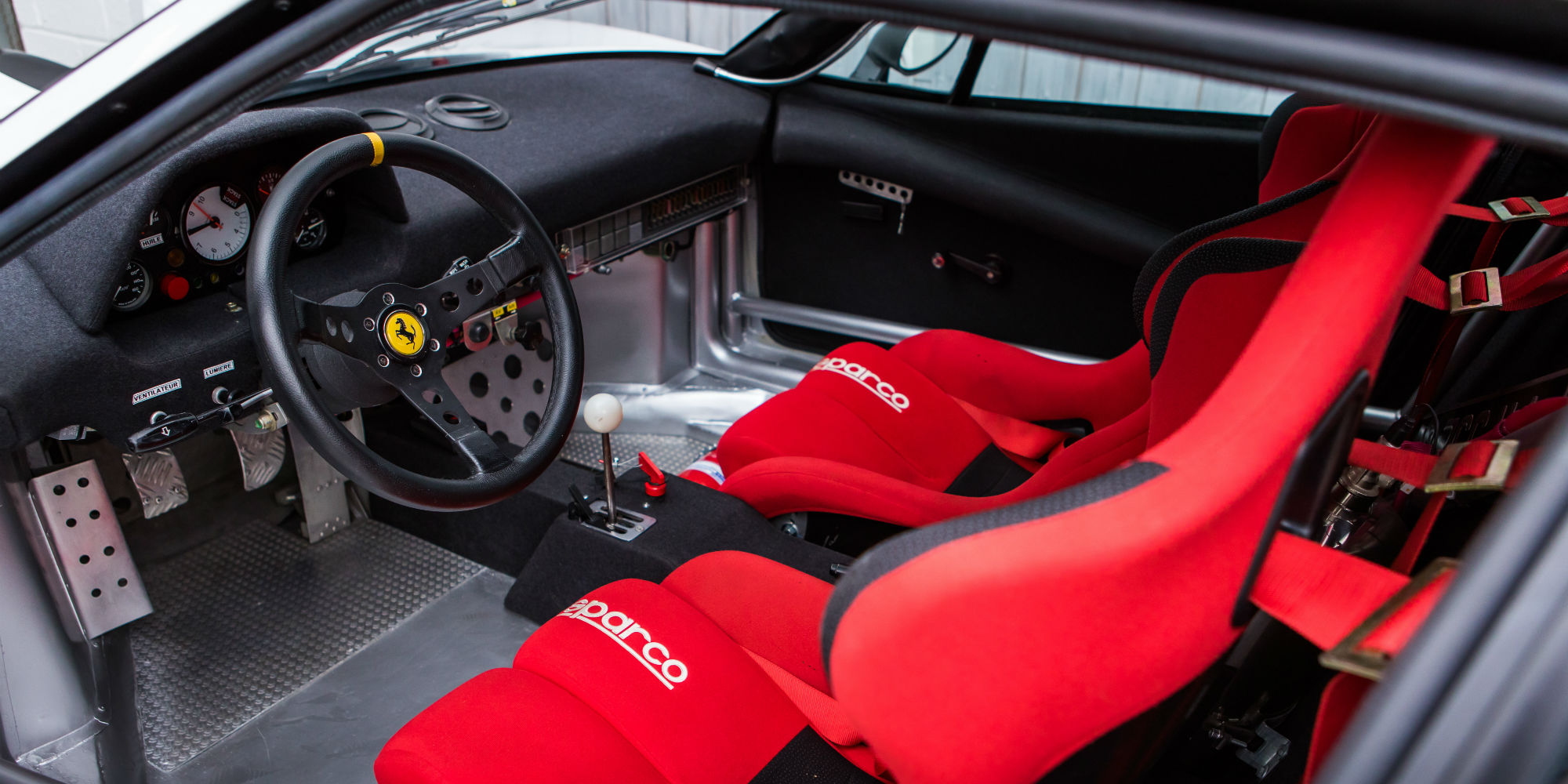 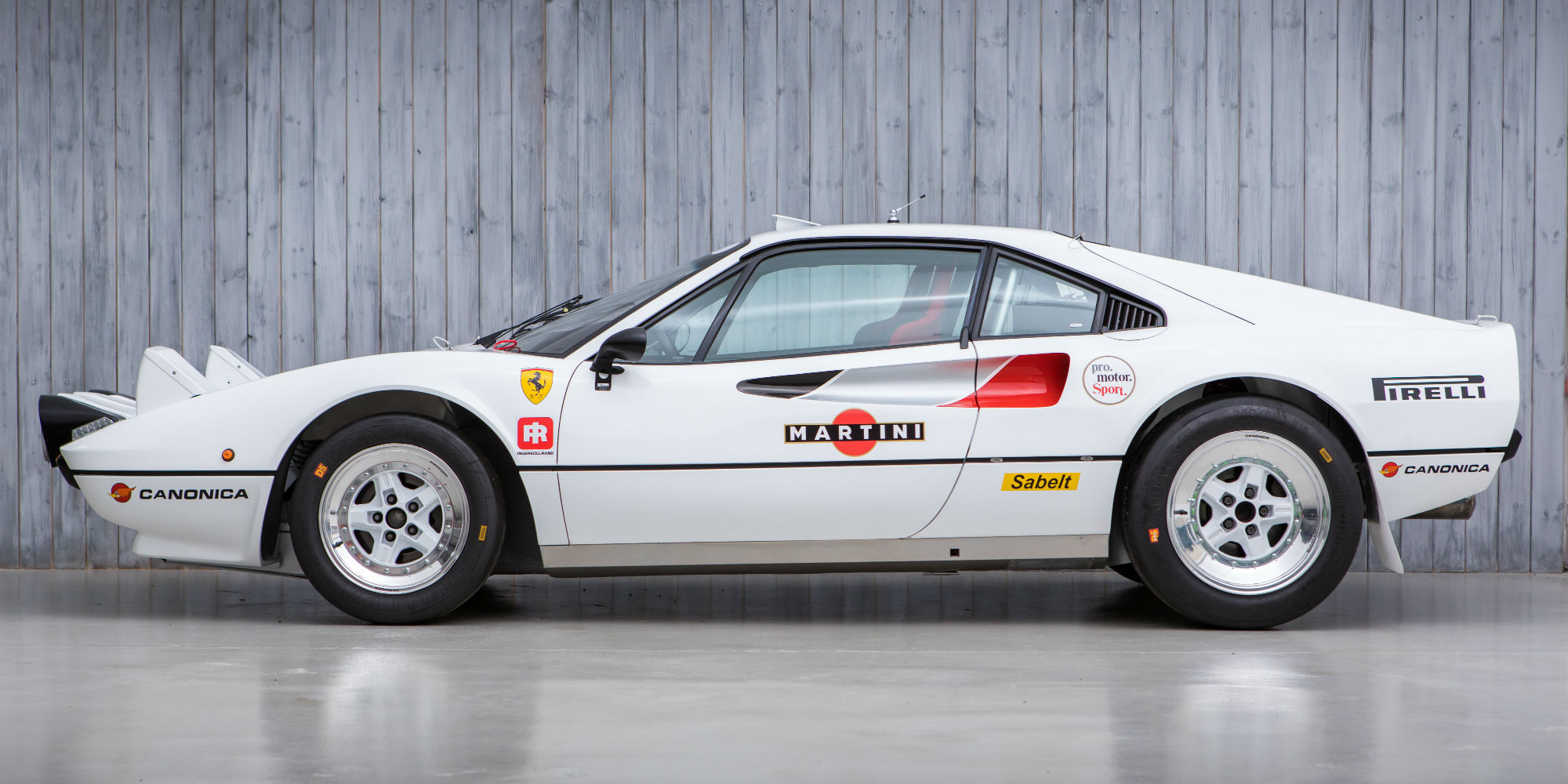 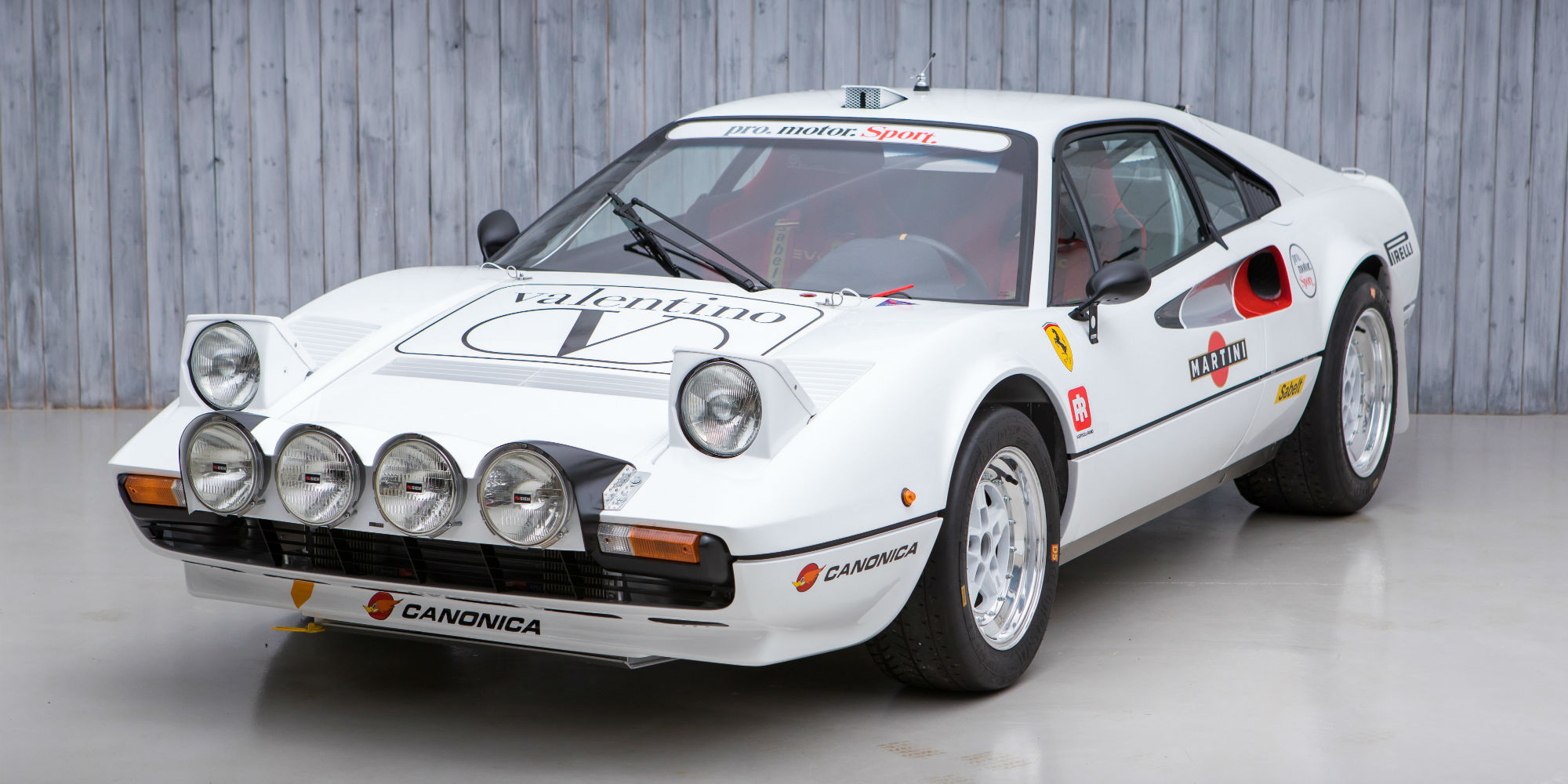 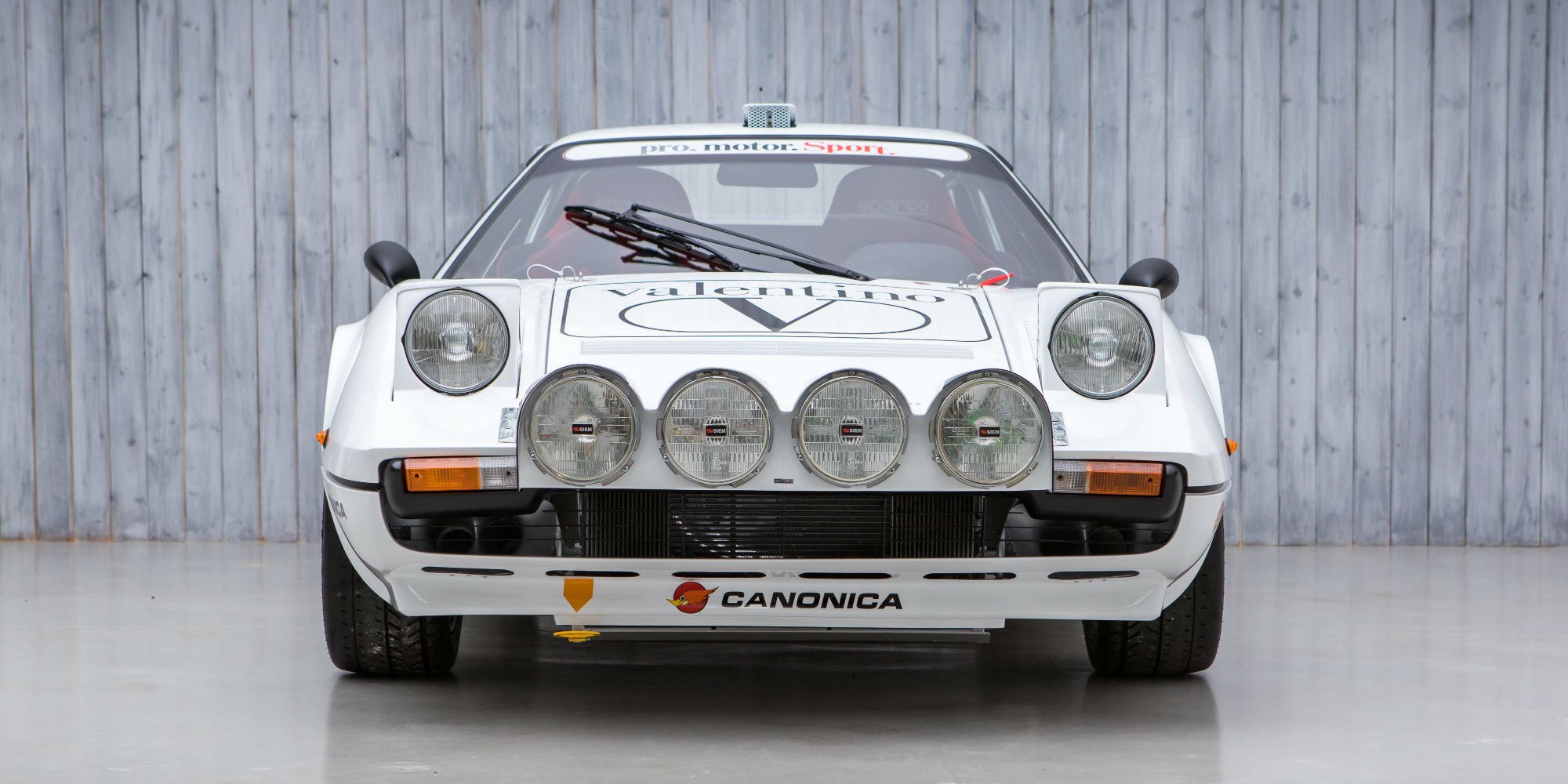 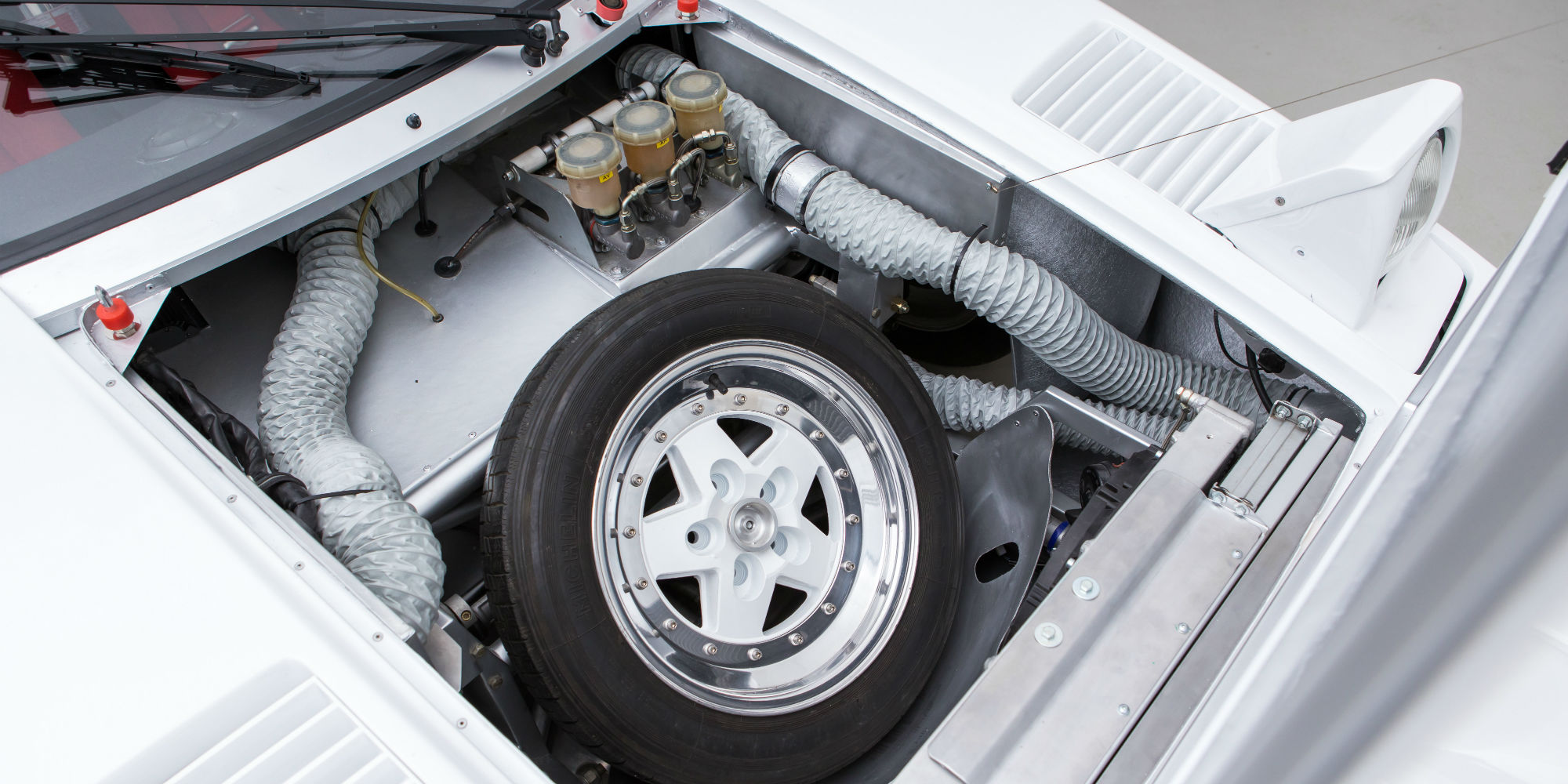 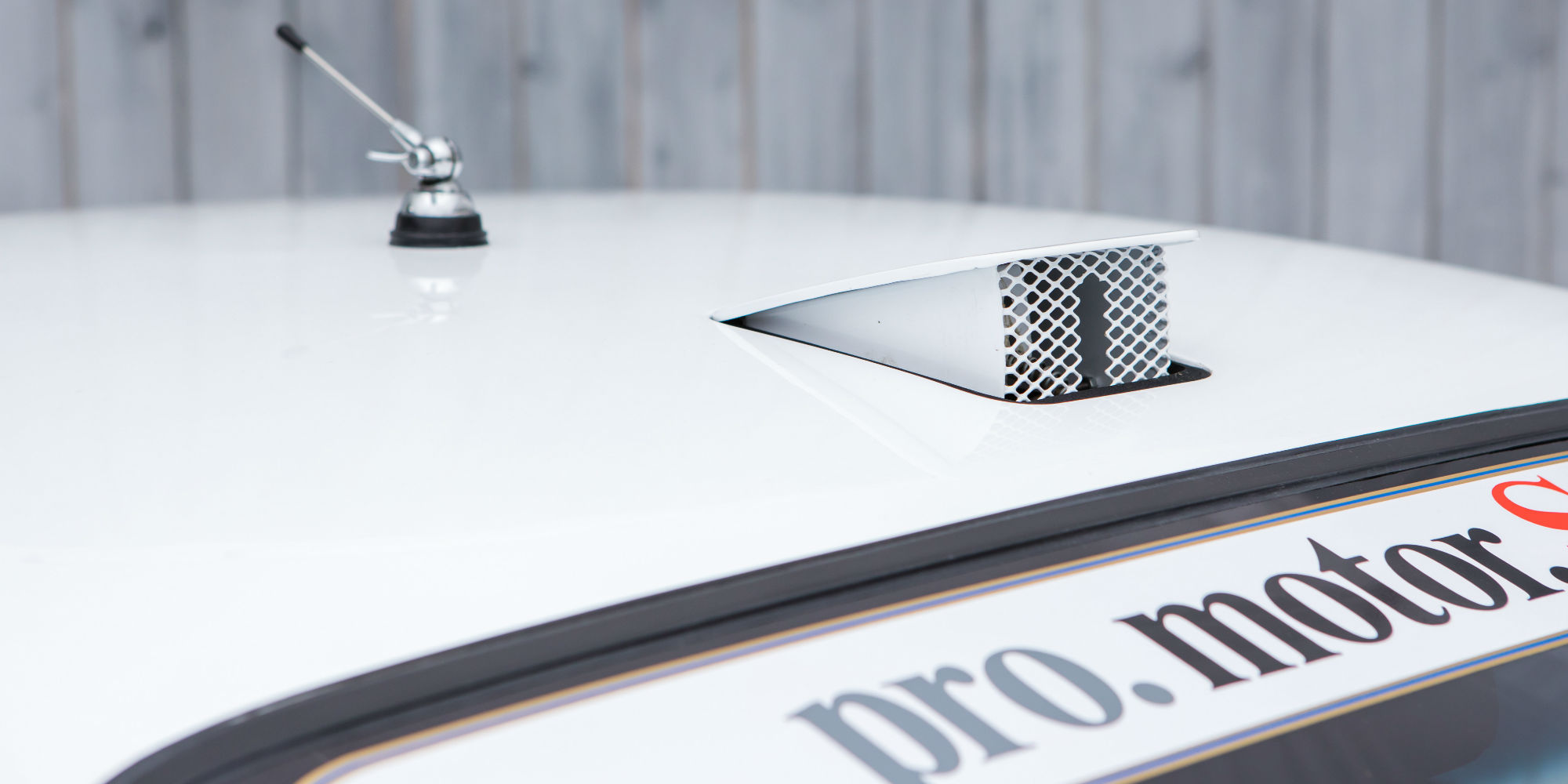 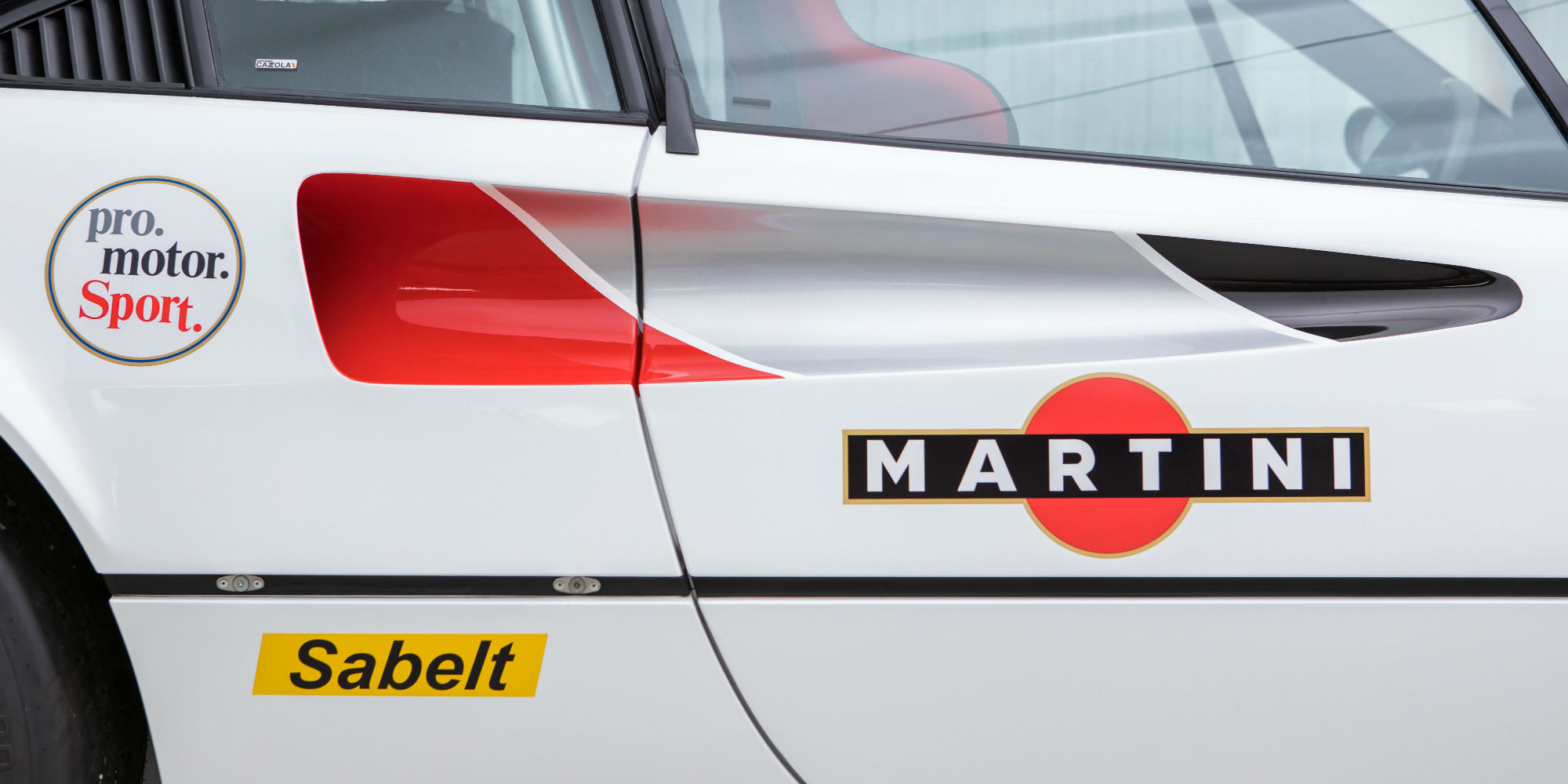 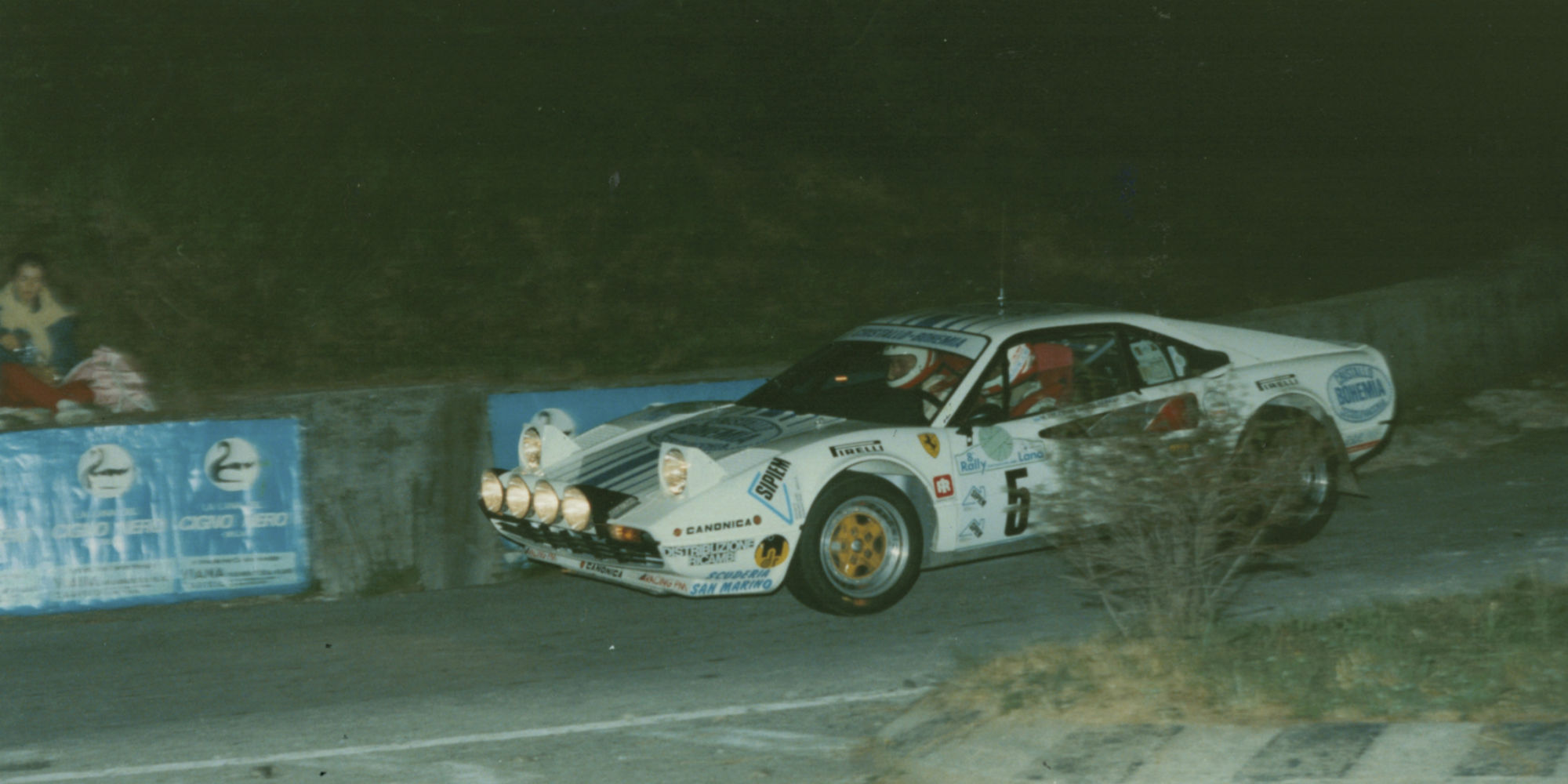 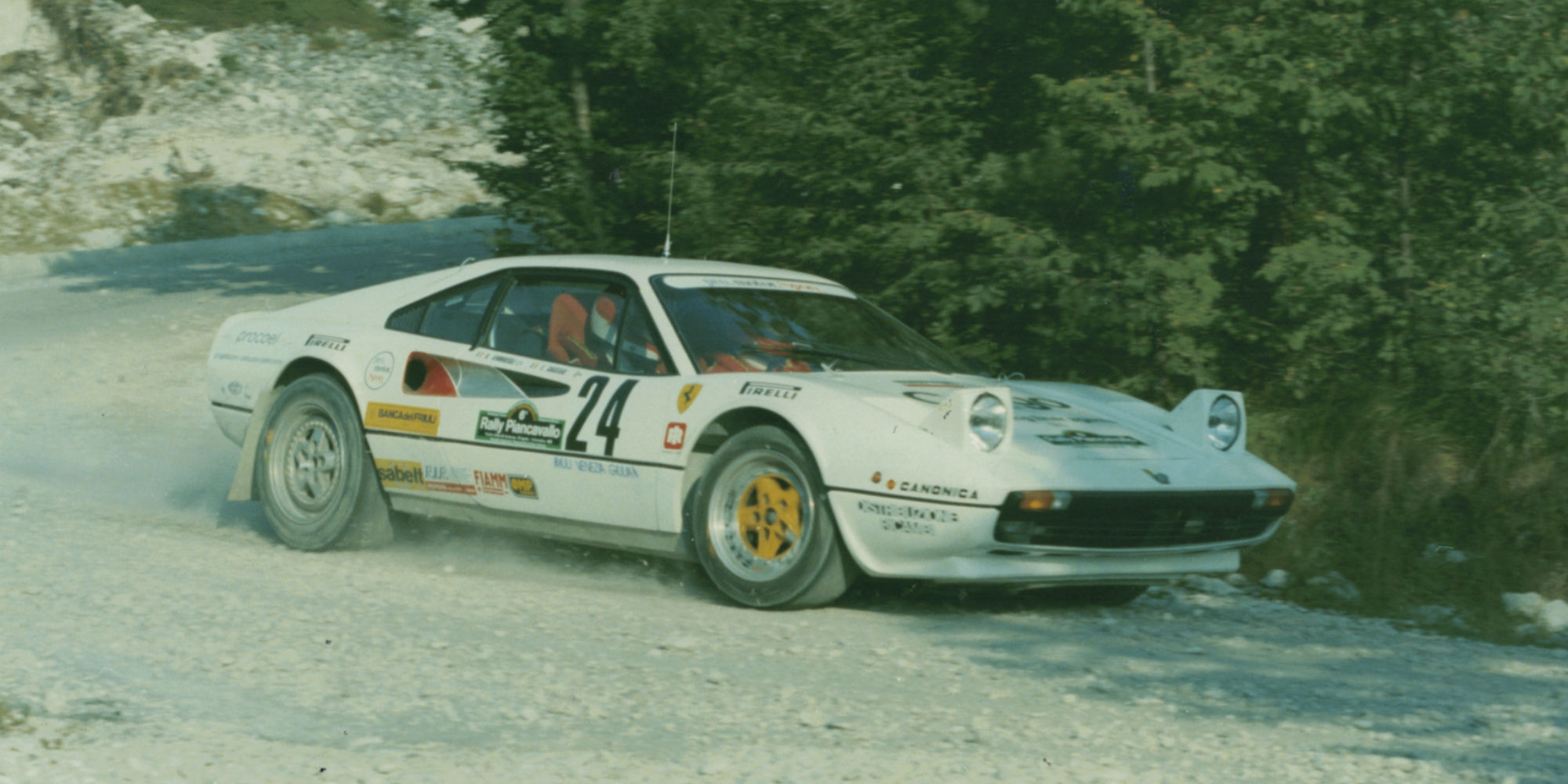 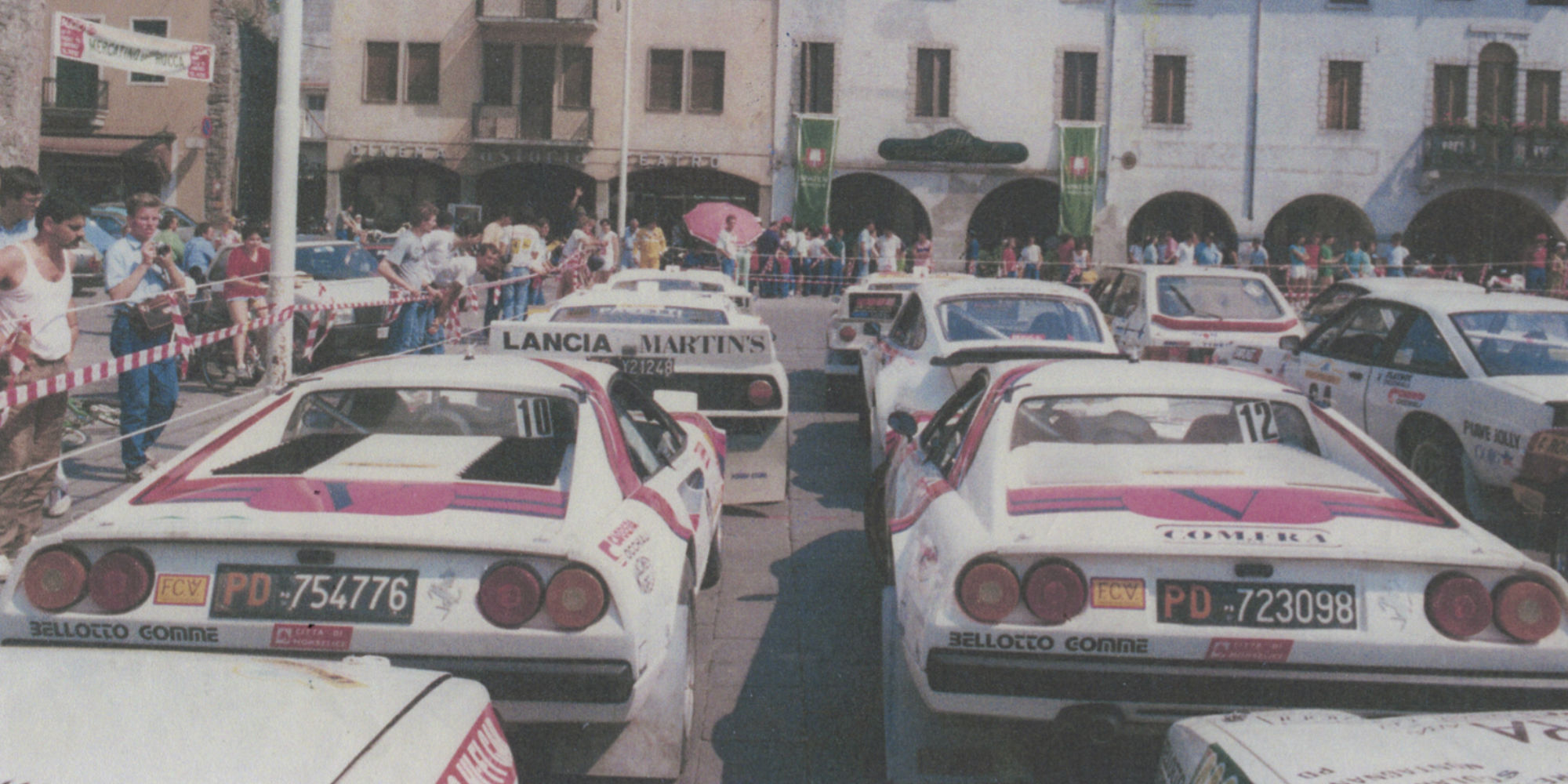 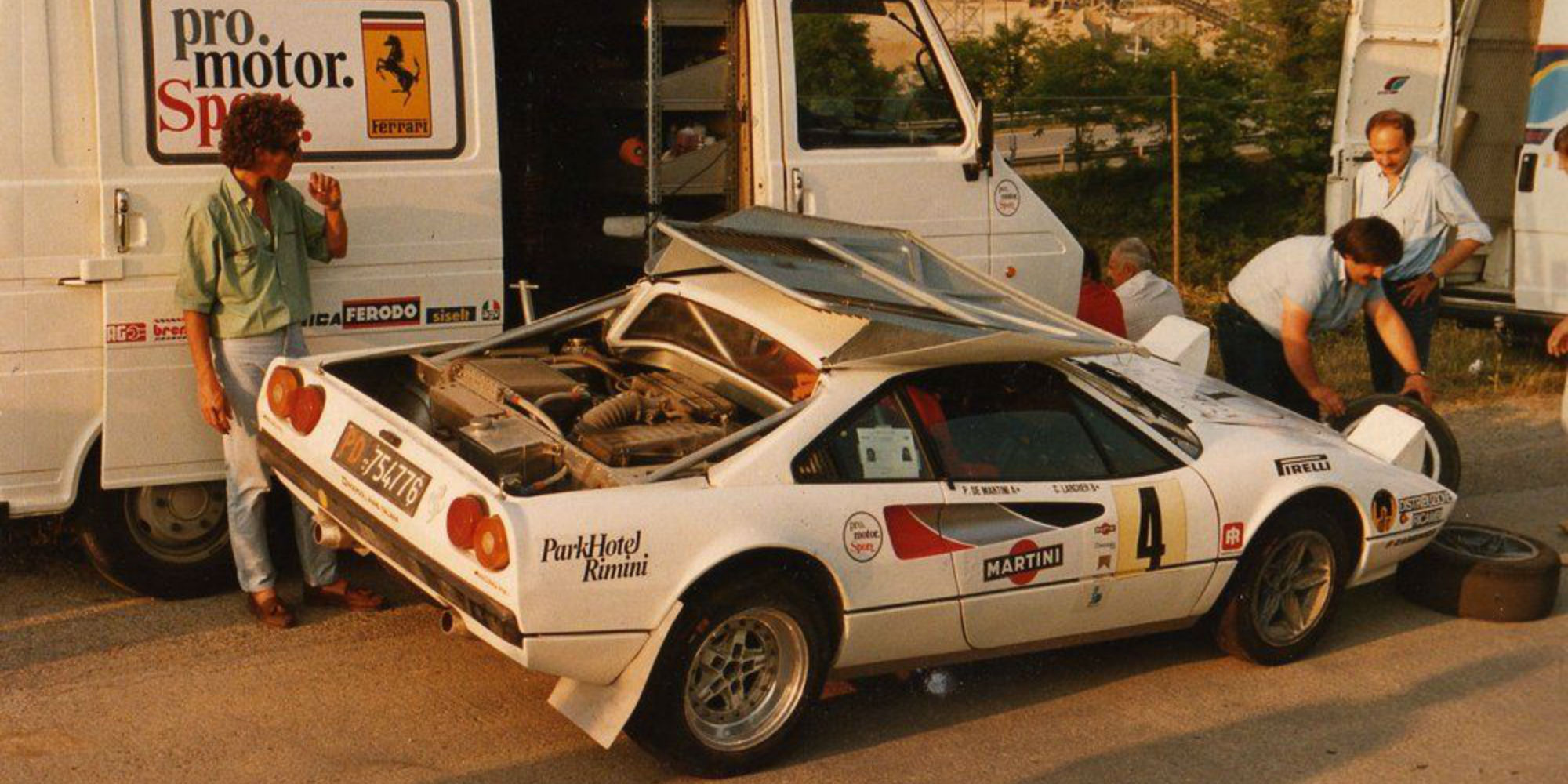 Often referred to as the golden era of rallying, Group B was introduced in 1983 to replace Group 4. The outgoing Group 4 regulations required a minimum of 400 cars to be produced in order to gain homologation status as a rally car. The new Group B regulations only specified a production run of only 200 cars for homologation, along with fewer restrictions on design and the technology employed. These more liberated regulations resulted in some of the fastest and most competitive rallying ever seen.

As a member of the Fiat Group, Ferrari were assigned with the on track competition duties, while Lancia were entrusted with the rallying. Padova based official Ferrari dealer Michelotto had begun modifying and preparing 308 GTBs for use in Group 4 rallying by various Italian privateers and Ferrari France in the guise of Pozzi. Therefore, as Ferrari were not able to carry out this work in house, they backed Michelotto with official authorisation and subtle support. Michelotto’s effort was also assisted by Ferrari homologating various upgraded components in 1976.

In 1983 when the rules changed over to Group B, Michelotto continued to build the Ferrari 308s and produced a total of four to Group B specification. One had a 2-valve engine producing 288bhp, while the following three featured the 2927cc V8 Quattrovavole engine on Bosch K-Jetronic injection turning out 310bhp, and revving to 8,000rpm. They had the competition ‘quick change’ gearbox where in the rallying days the final drive ratio could be changed in a matter of minutes by removing a cover to expose a pair of drop gears.

However, due to homologation these Quattrovalvole engined 308s had to run with a steel body and to a heavier weight limit than the fibreglass bodied 2 valve teammates. Michelotto began developing the 308 GT/M as a solution to this, which combined the moving components of the 288 GTO with the 308. With them busy on this project, the running of the Group B cars fell to Pro Motor Sport.

Pro Motor Sport developed a business model where they would provide competitive cars and the services that are required with them on an ‘arrive and drive’ hire basis to capable drivers. Following wins in the 1983 and 1984 seasons, Pro Motor Sport had two more cars built by Lino Cazzola. Cazzola who had been responsible for building the chassis and bodies for Michelotto, built these two cars exclusively for Pro Motor Sport when Michelotto had become busy with other projects. Using lightweight fibreglass and kevlar body panels, they were equipped with 2-valve engines running on Bosch K-Jetronic fuel injection and were completed in time for the 1985 season.

This car, chassis 24751, is one of those two and started life as a 308 GTS in 1978 before being built for Group B by Cazzola over the winter of 1984/1985. The GTS chassis was chosen due to the increased strength they were designed with to support the open roof. As detailed by the invoices from Cazzola in the file, Pro Motor Sport registered 24751 in Padua with the number PD 754776 which adorned it during it’s rallying career with Pro Motor Sport.

Distinctive with the red, silver and black flashes in the side air intakes, 24751 made its competition debut on the 23-25 May 1985 at the European Championship round of Rally Dell’ Isola d’Elba with Ercolani and Roggia. Carrying the number 6 and a Valentino livery, the pairing took 6th place at the finish. 24751 continued through the ’85 season with a variety of different pairings, and Ercolani/Roggia competed with the car in a further round of the European Championship, and then in the World Championship Rally San Remo, where they retired.

24751 also competed in a number of Italian rallies through ’85, ’86 and ’87 with crews including De Martini/Larcher,  Pasutti/Trentin, Guggiari/Ambrosoli, Zanon/Zanella, and Ancona/Parri. It is believed that 24751 was driven by the legend Henri Toivonen at the Memorial Bettega Motor Show de Bologna in December ’85. In November ’86, Gechele and Cracco drove 24751 in the European Championship Rally San Marino, its final European Championship outing. The full rally results for 24751 are shown below:

After its Group B career, 24751 remained with Pro Motor Sport in Padova until it was bought by Stefano Durelli of  Vicenza directly from Fabio Pennariol of Pro Motor Sport, and he registered it April 1991. Durelli, a collector of fine Ferrari, kept 24751 until the opportunity to buy the Group 4 308 in which Jean-Claude Andruet won the Tour de France came up, and he sold 24751 to Alain Pages of France in 2004.

Remaining in the last period livery in which it ran, a Valentino livery, Pages used 24751 in historic events including the Tour Auto. In 2018, 24751 was bought from Pages by the current owner, and entrusted to Luigi Cazzola for restoration. As can be seen in the photographic record, Cazzola went right through the car in the restoration which totalled over 100,000 Euro.

Presented today with French registration FA-392-QP and having received minimal use since the restoration was completed, 24751 is in exceptional condition. It is accompanied by the original Bosch K-Jetronic fuel injection system, the original Padova registration plate, Italian registration documents, French Carte Gris, correspondence between former owners detailing their ownerships, period rally reports and invoices from Cazzola, both in period and for the restoration.

With only 6 factory supported Group B 308s constructed, it is a chance seldom had to acquire one. 308s are afforded the option to compete in popular events such as the Tour Auto, Modena Cento Ore, Tour de Corse Historique and more.