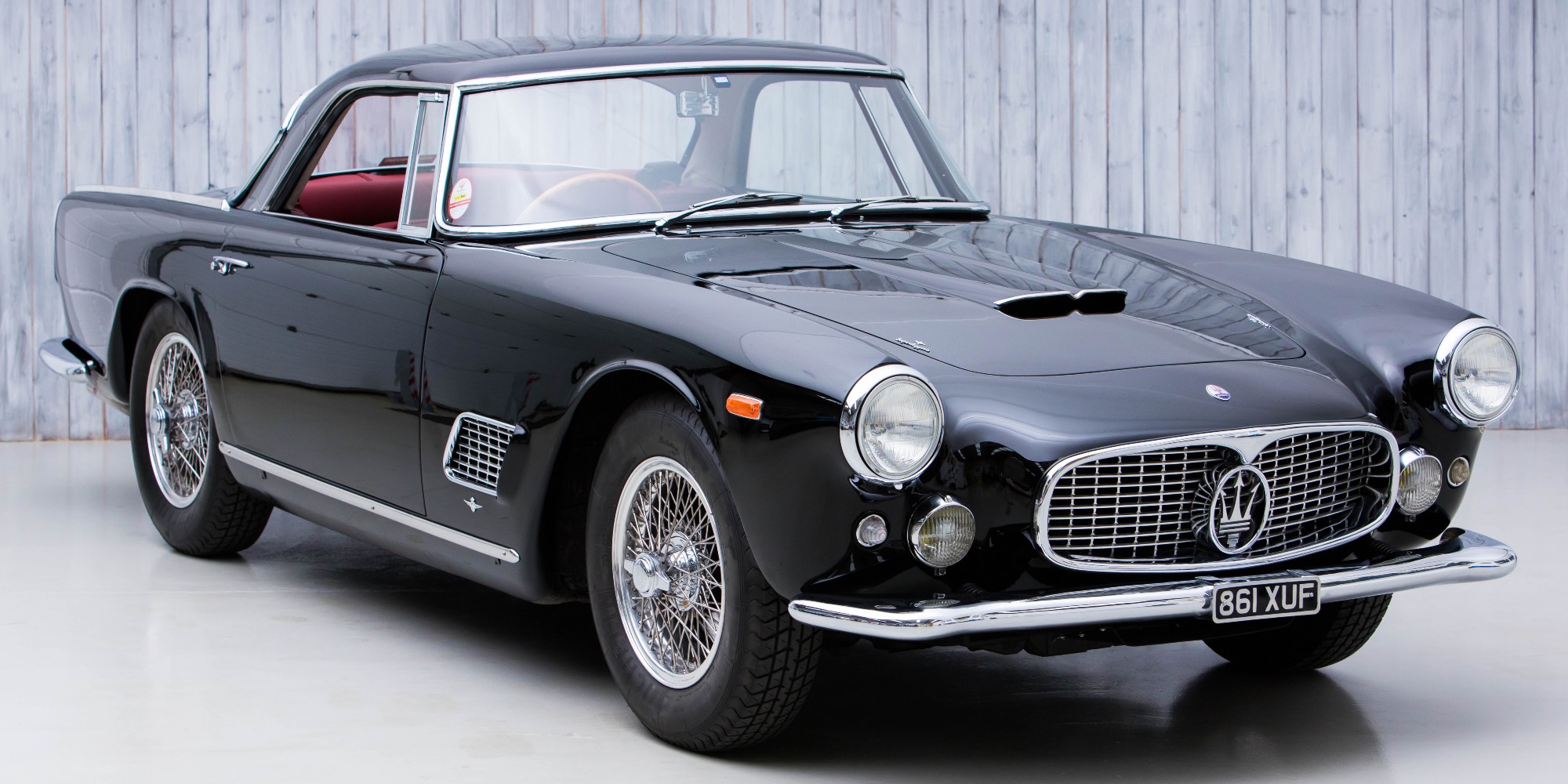 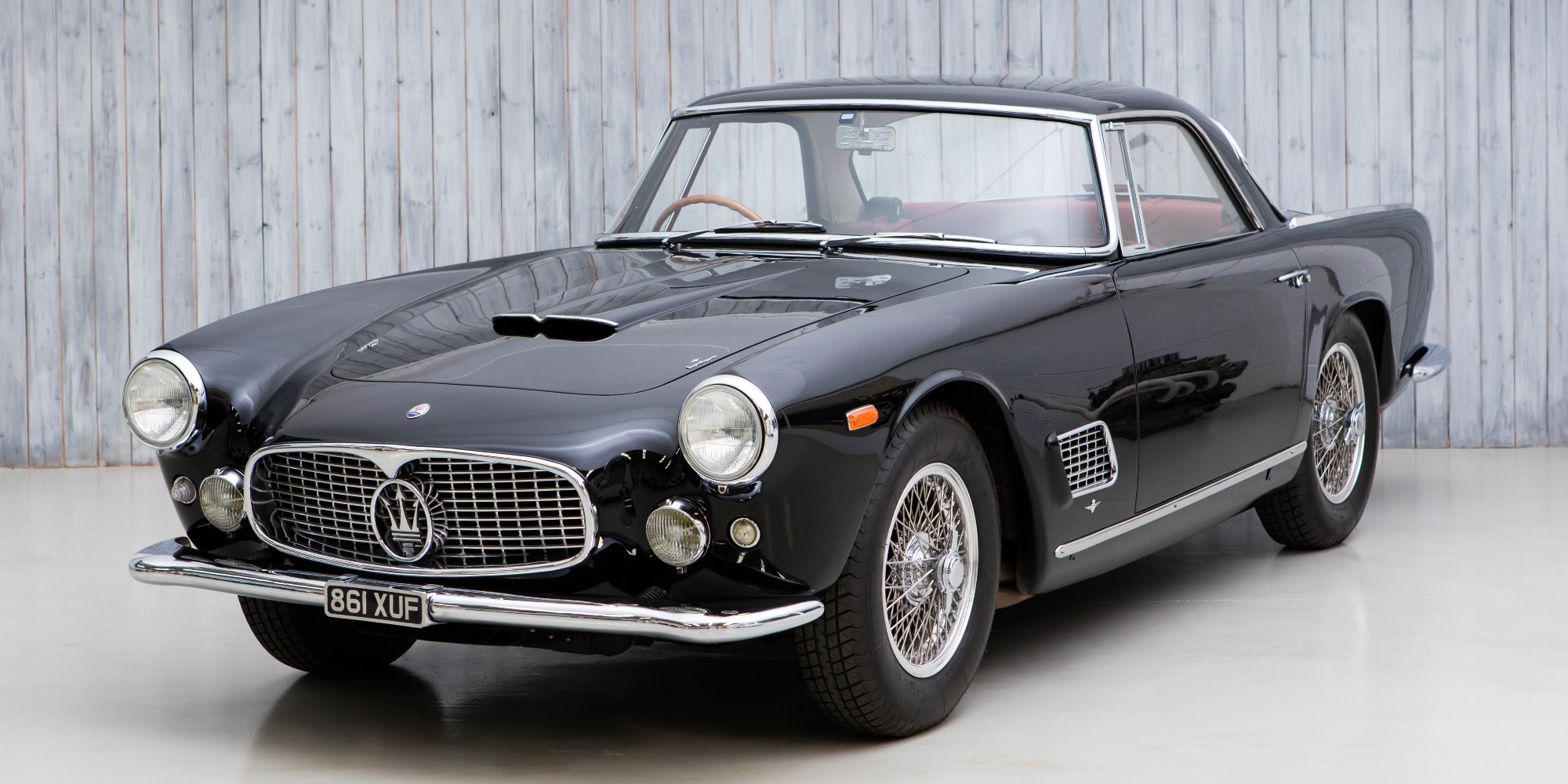 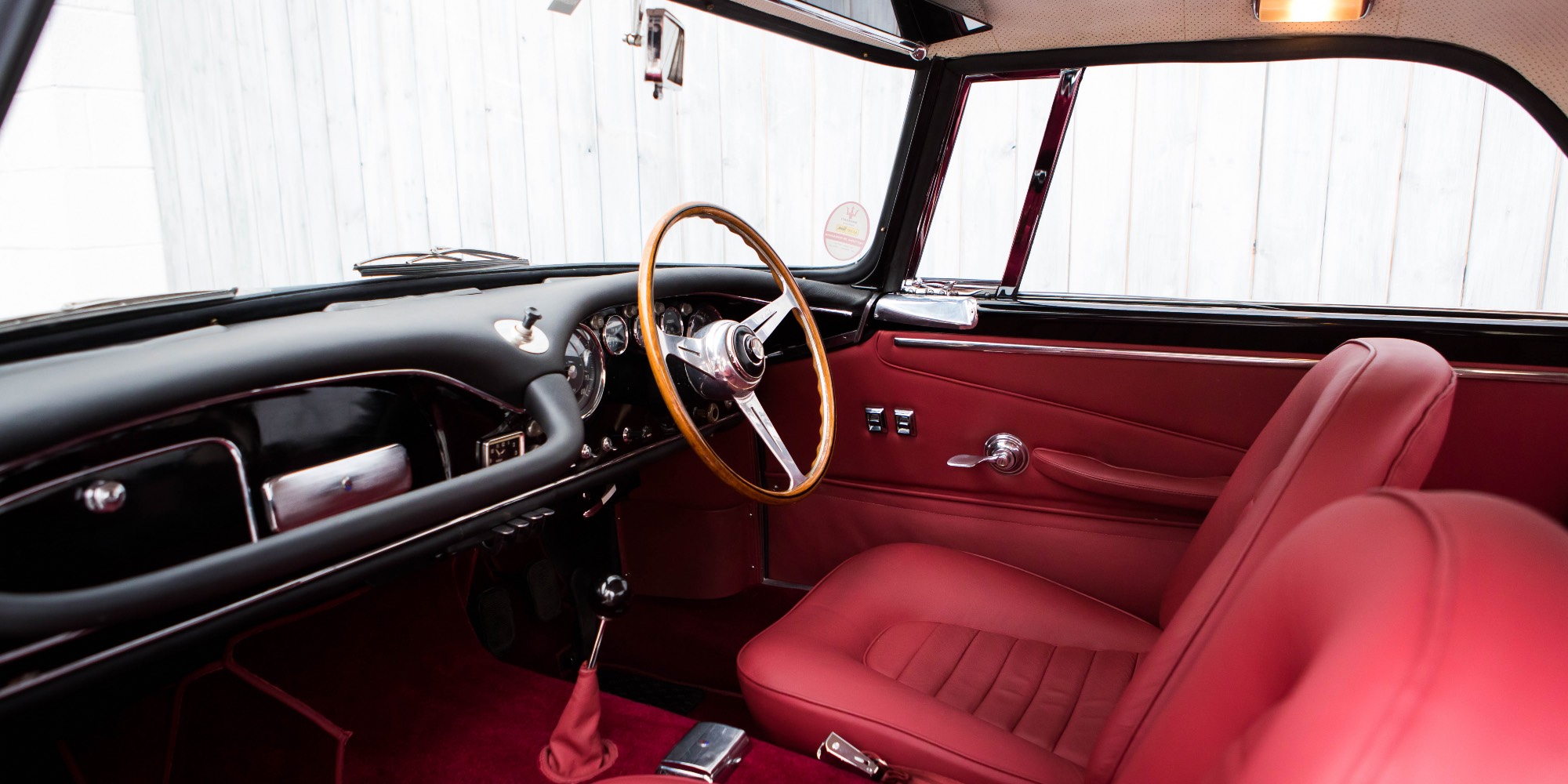 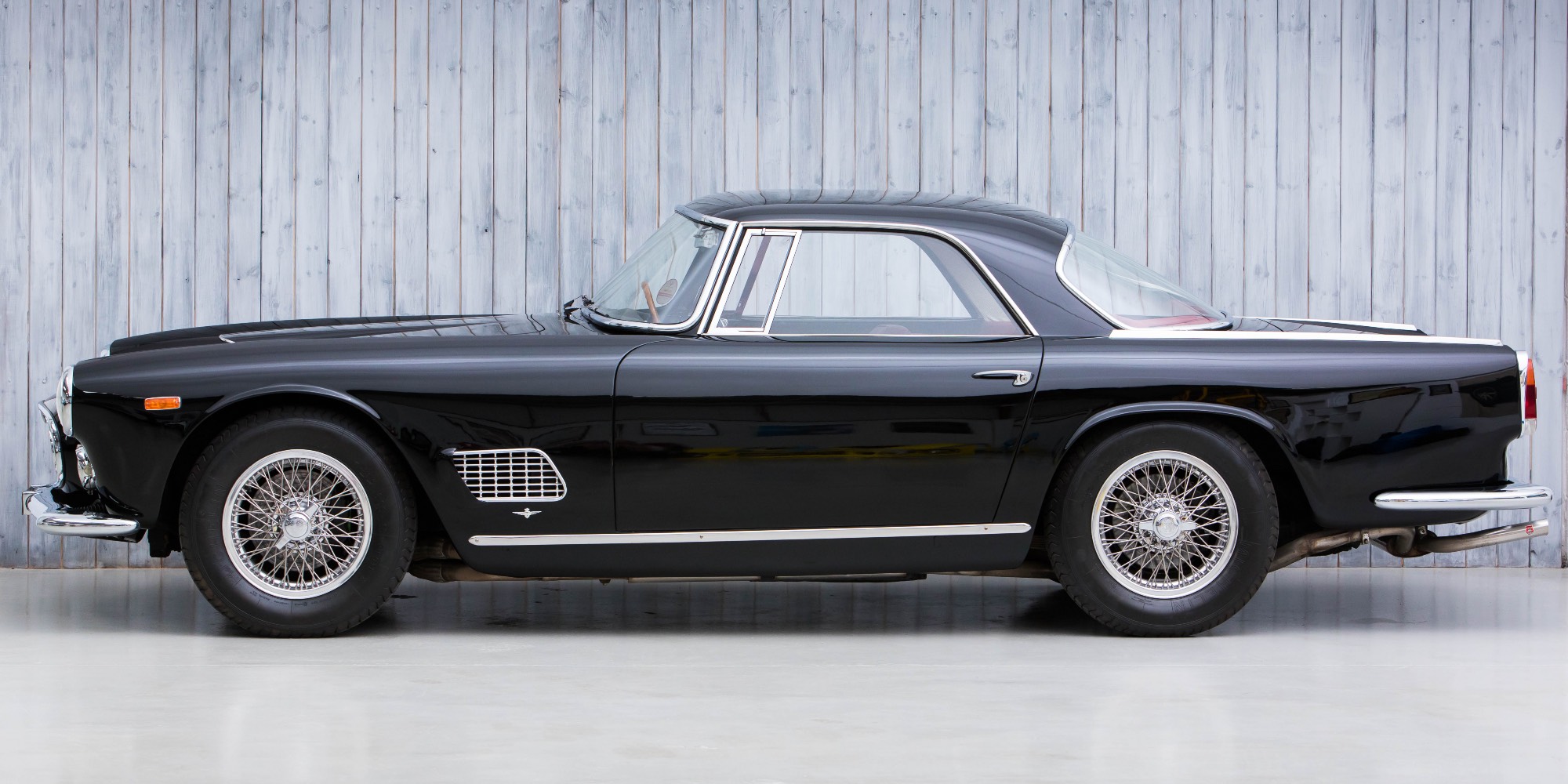 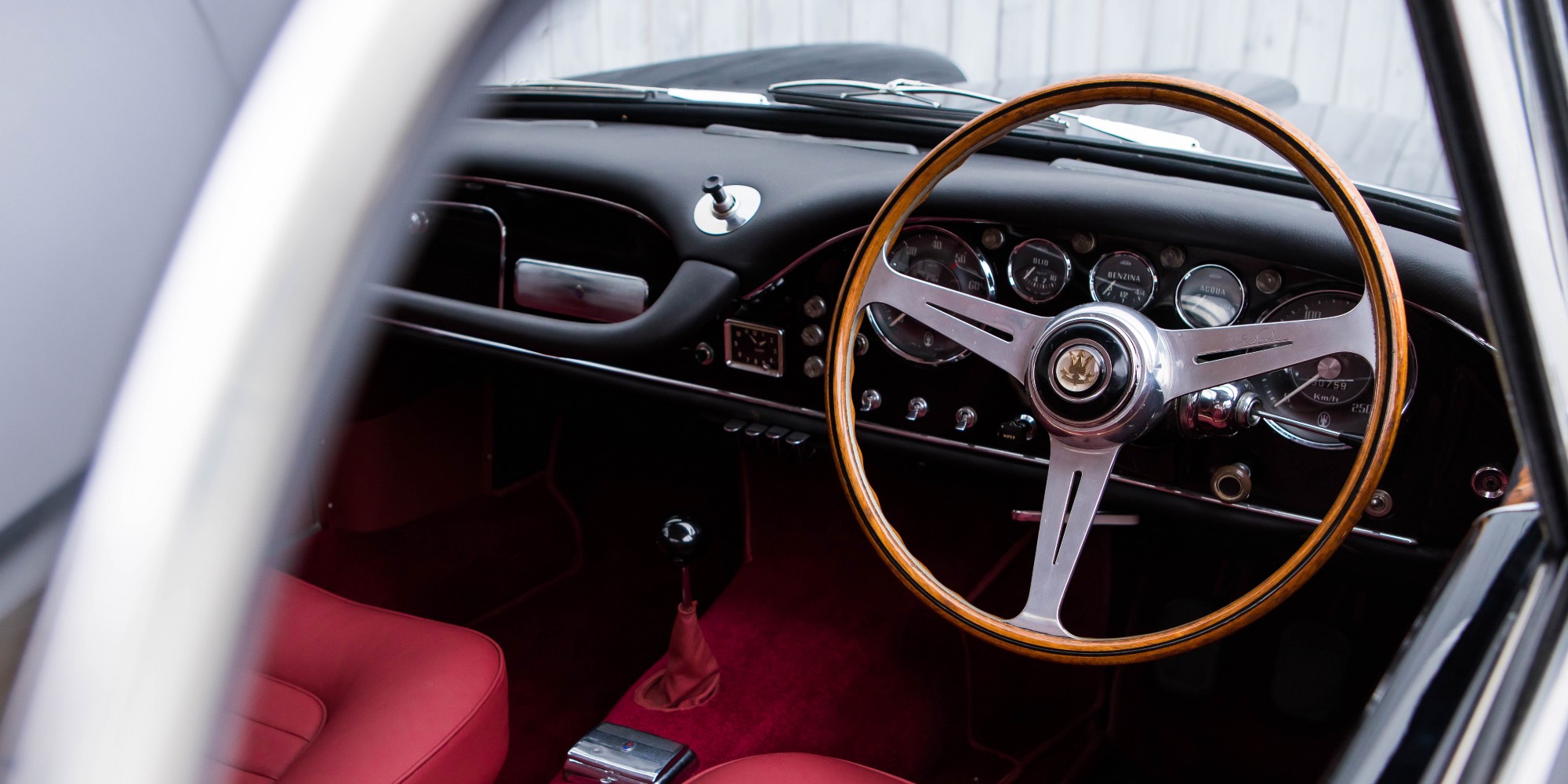 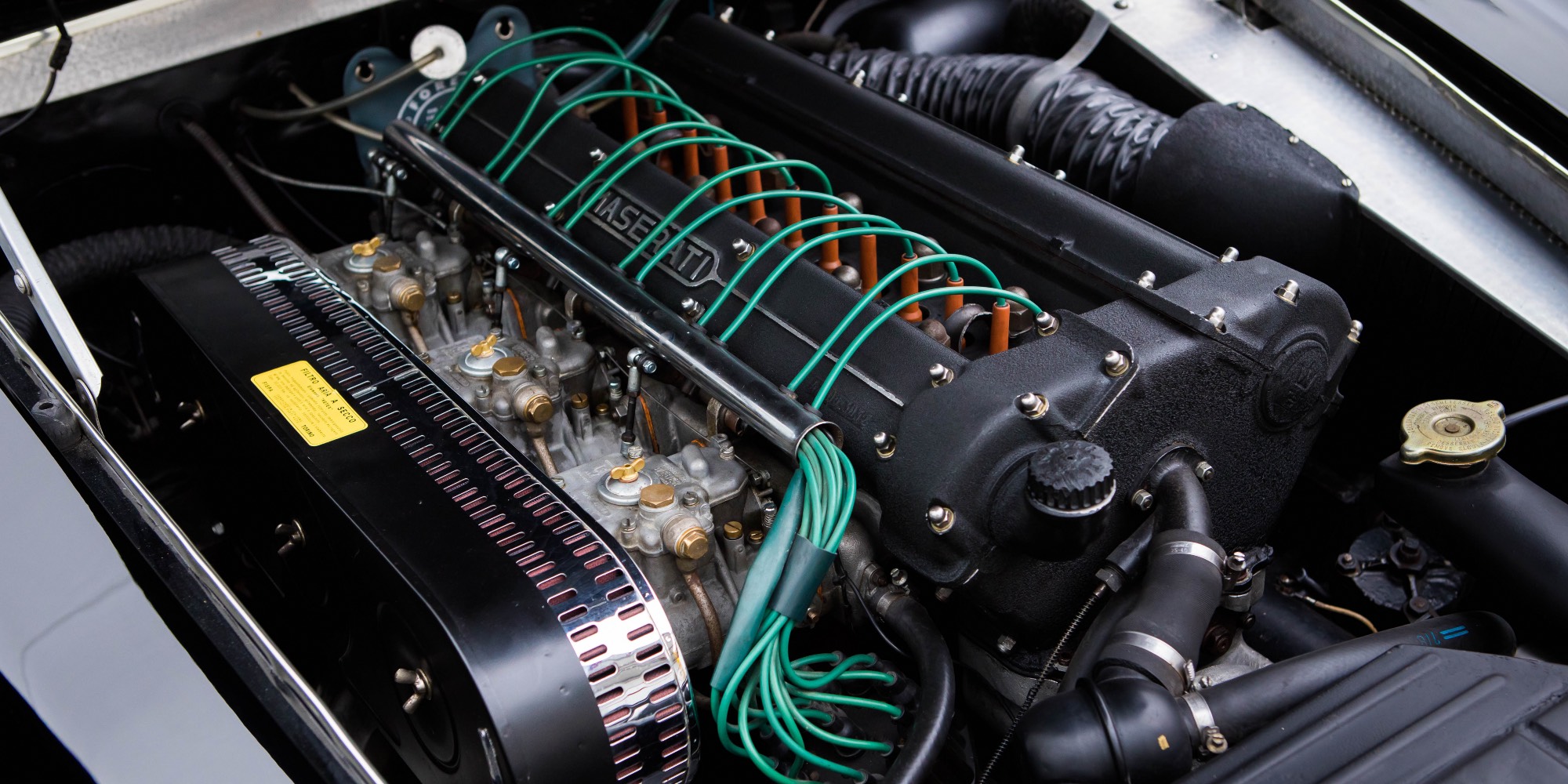 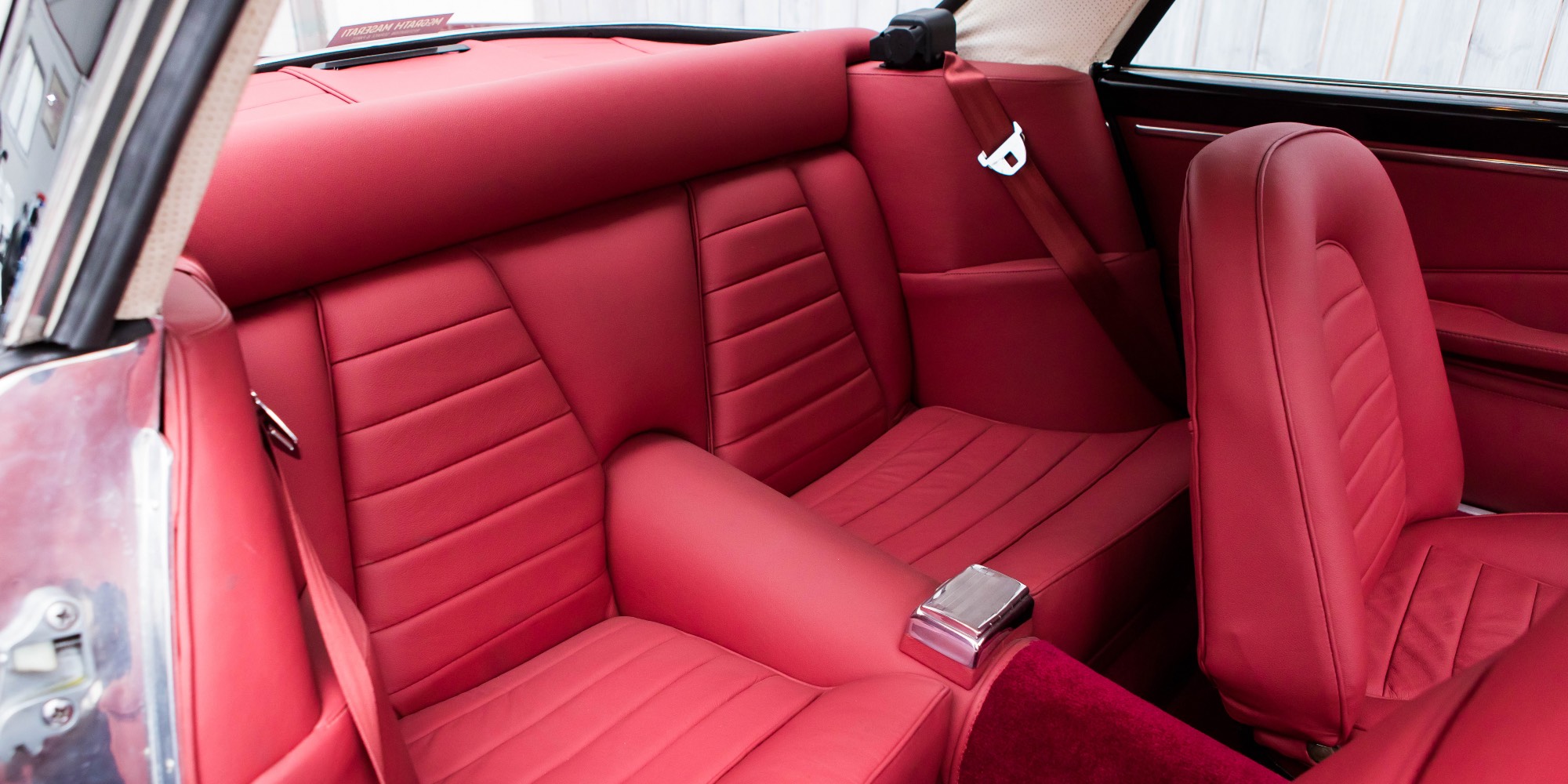 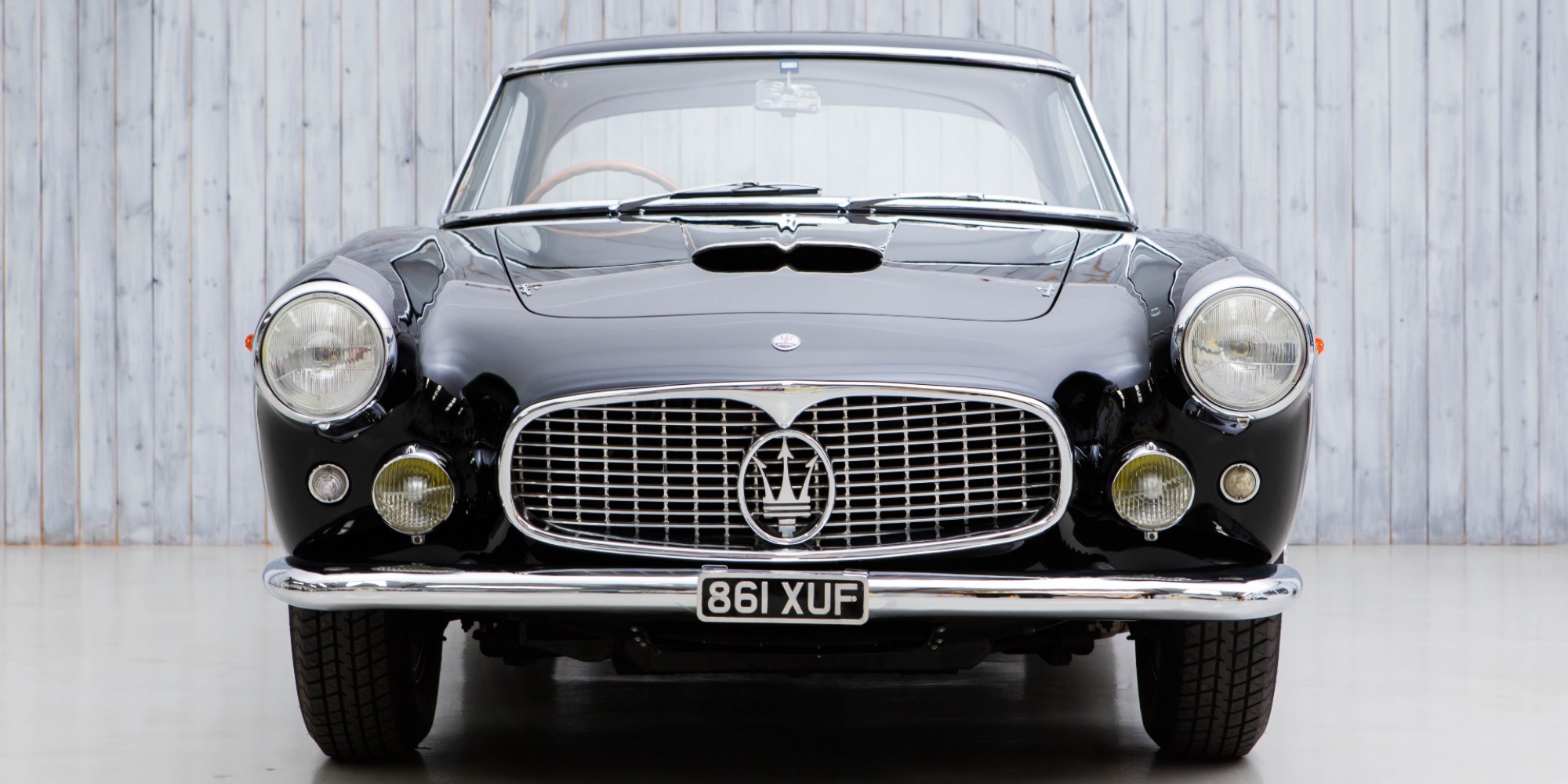 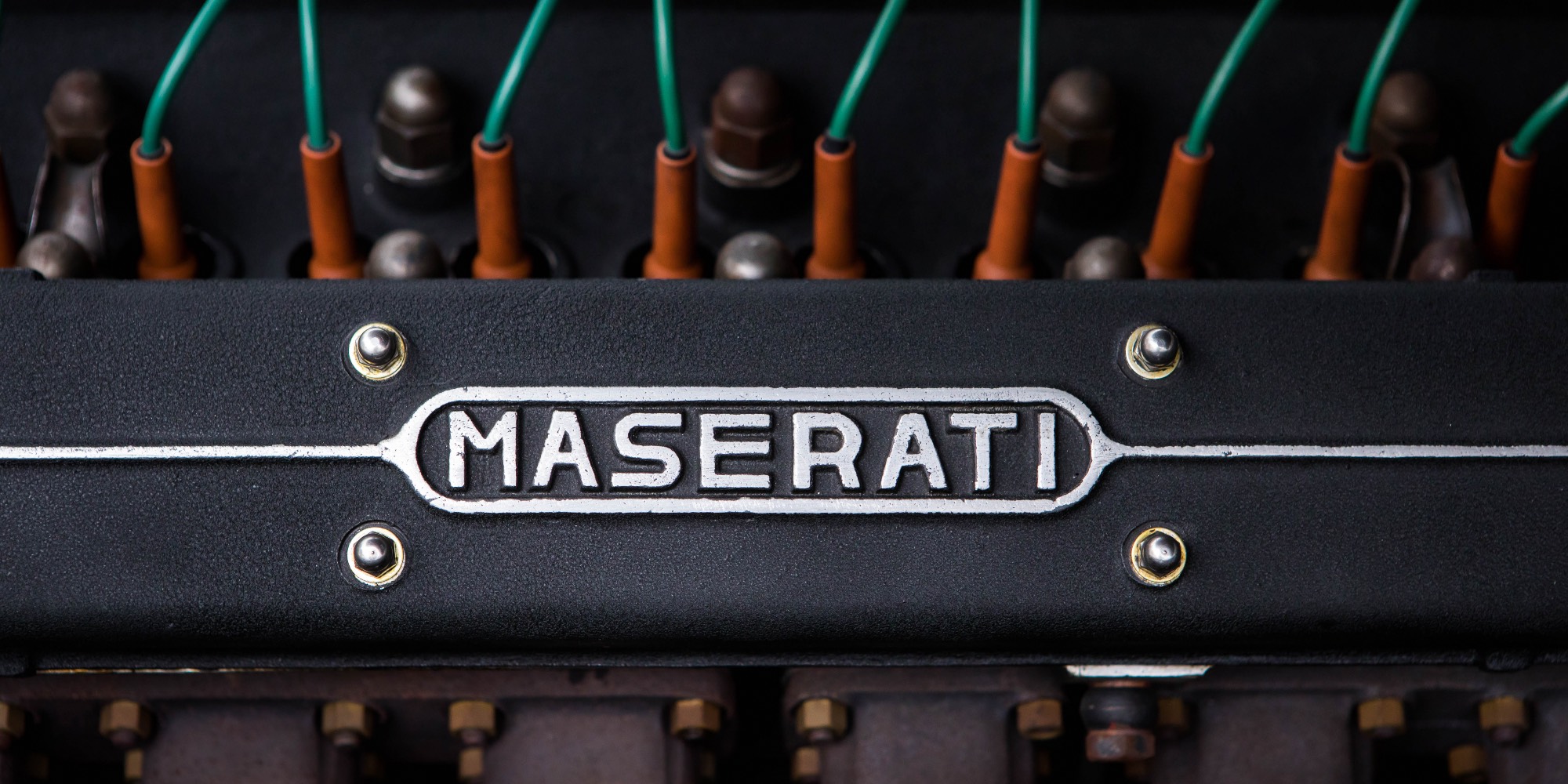 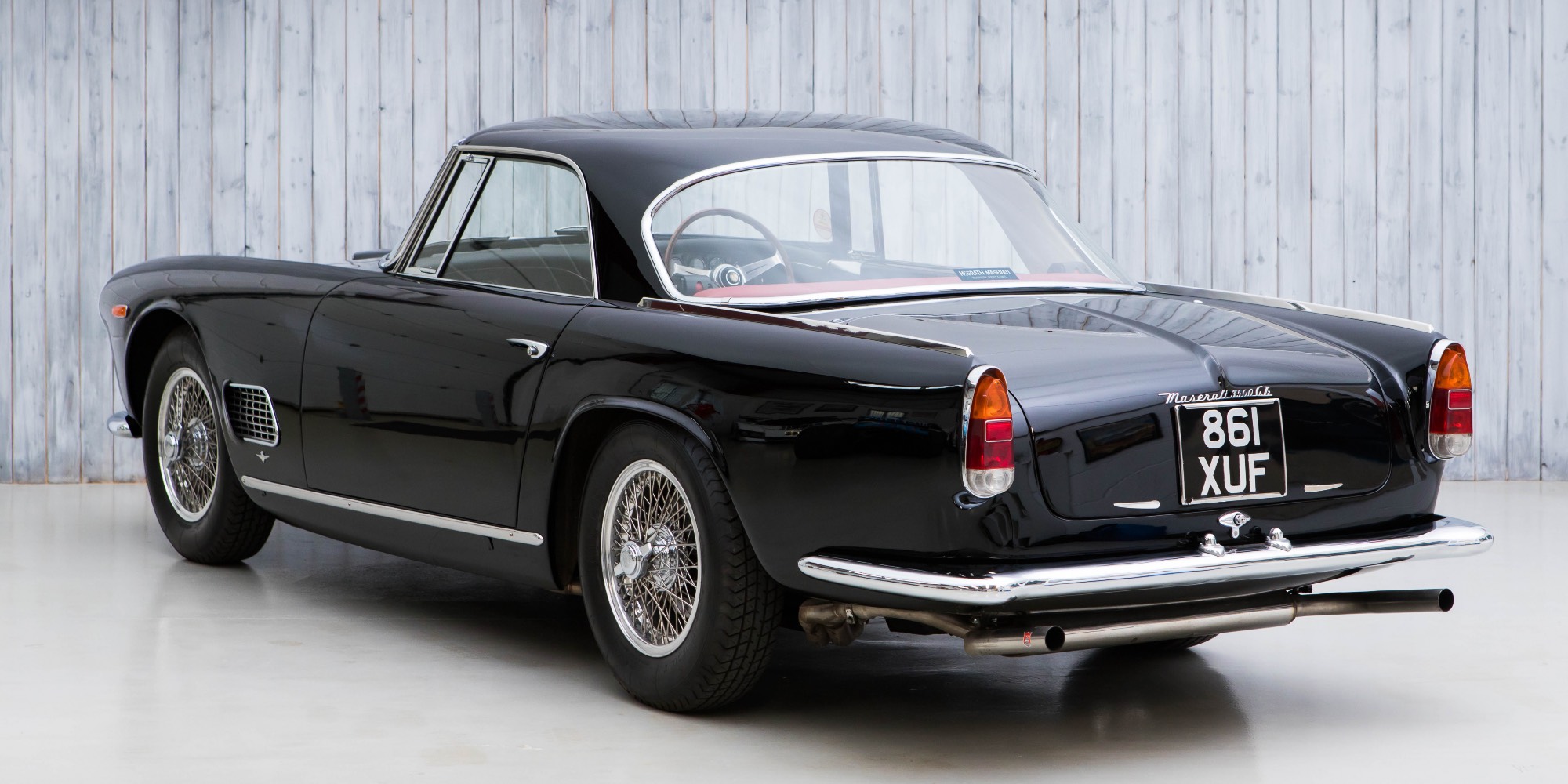 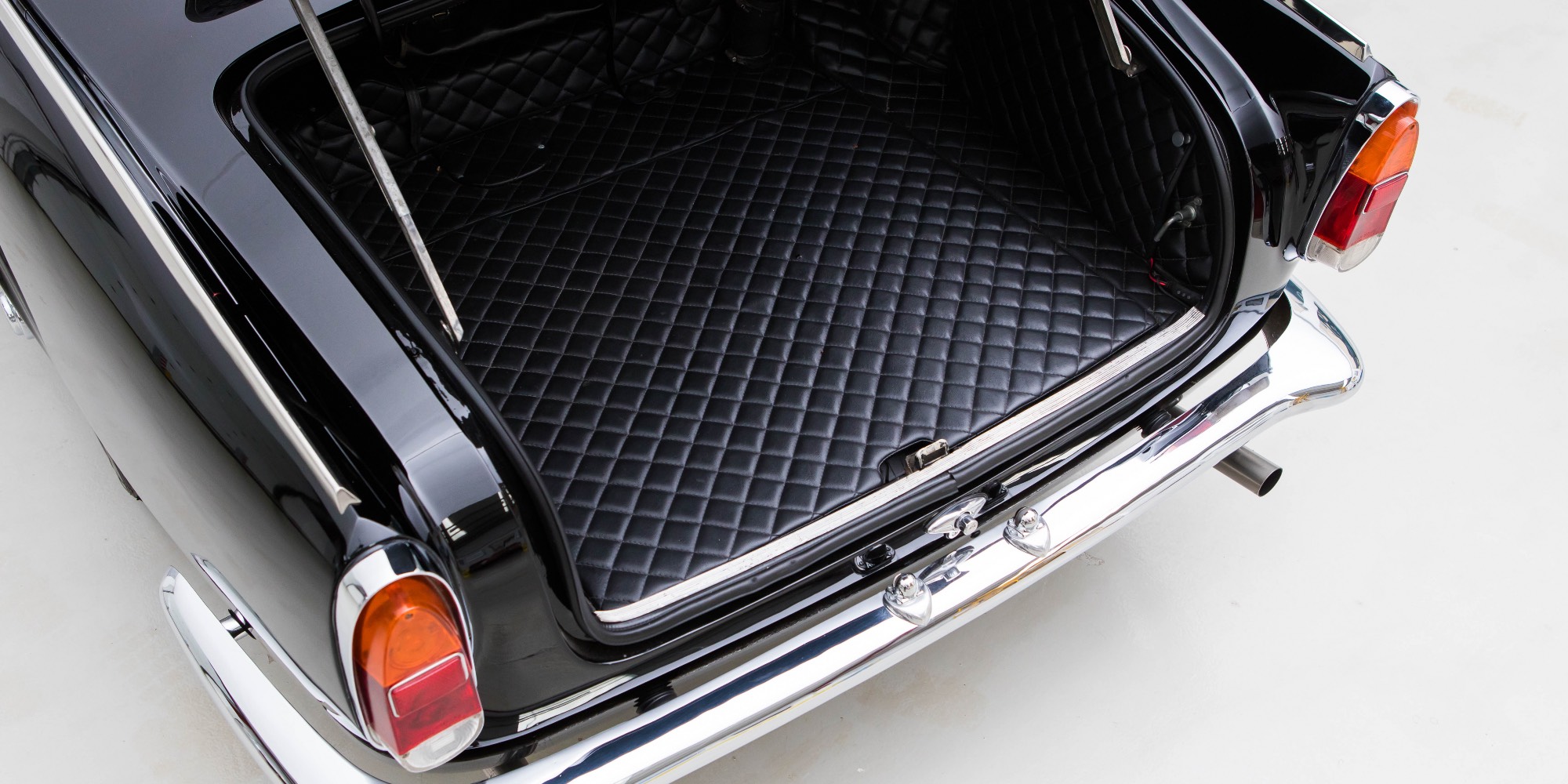 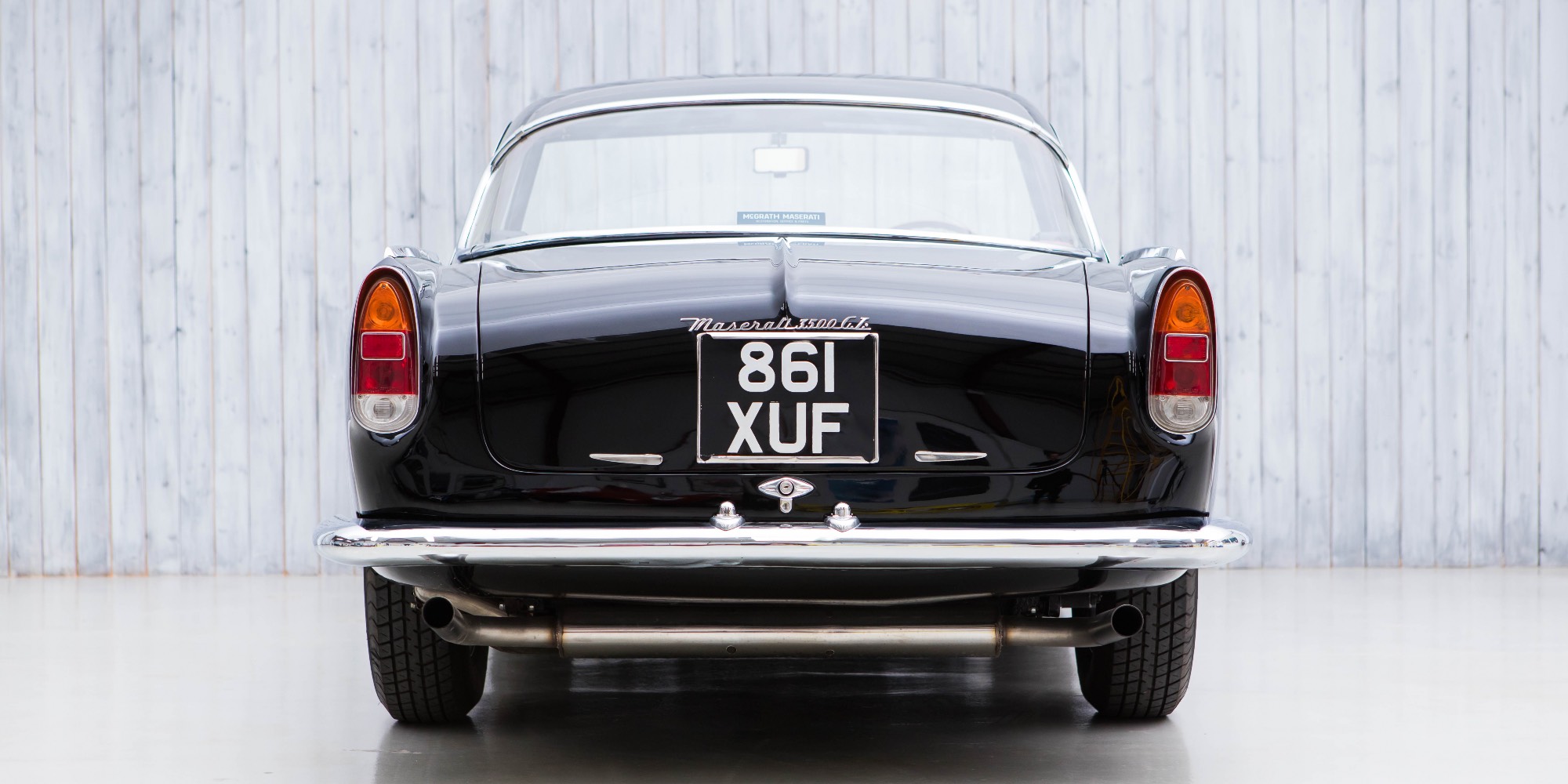 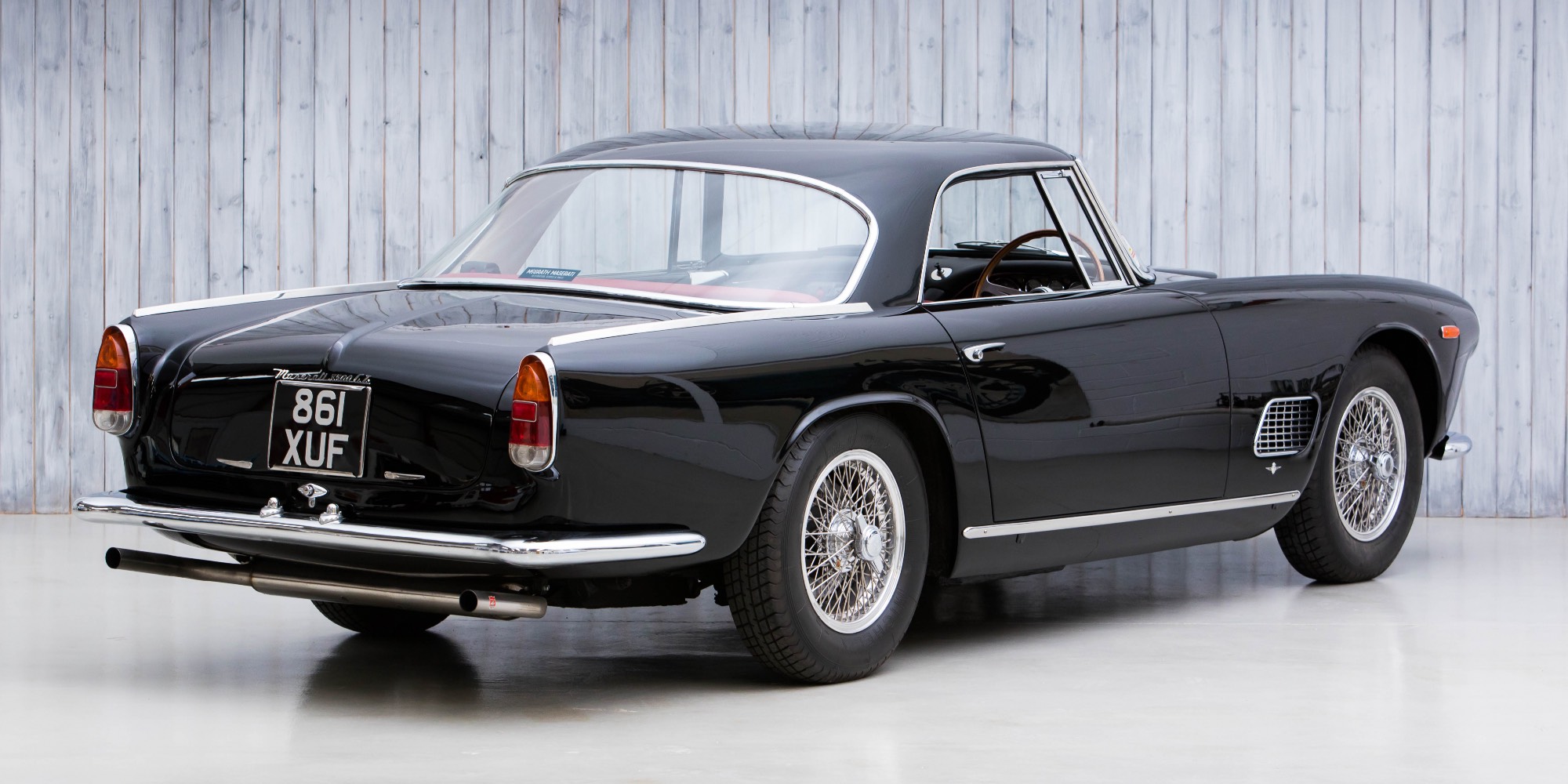 Maserati is a company whose raison d’etre was for many years success in front line competition, synonymous with the image of the great Juan Manuel Fangio drifting a Maserati 250F Grand Prix car. Formed by the Maserati brothers in Bologna, Italy in 1914, the marque began by producing cars for Grand Prix racing. Their famous trident logo was used to represent strength and vigour by association with Neptune, with the inspiration originating from the Fountain of Neptune in Bologna. One of their first cars, driven by Alfieri Maserati, won the 1926 edition of the Targa Florio when it was one of the most important events in Europe.

After Alfieri’s death in 1932, the three remaining brothers kept the company going until they sold their shares to the Orsi family in 1937. In the new ownership, the Maserati factory was relocated to Modena and the Maserati brothers remained on board, engineering the cars to further Grand Prix successes. Following a hiatus from car manufacture during the Second World War, Maserati resumed its former focus when war time came to an end.

Alongside the single seater Grand Prix cars, Maserati began producing barchettas which utilised the powerful engines they were producing, and the company made the cars available for customers to buy. The first examples of these barchettas were of the A6 family, which proved successful and carried through to 1954 in many forms. Within these years, a few berlinettas were built, often as statement show cars, and production numbers remained very limited. Of particular note were the stunning 1953 A6GCS/53 by Pinin Farina, and Zagato’s timeless A6G/54.

It was at this time, in 1954, that Maserati revised their six cylinder engine design for the new Formula 1 challenger, the 250F. Having won its first two Grand Prix with Juan Manuel Fangio at the wheel, the 250F was a huge success for Maserati over several seasons. When Fangio rejoined the team in 1957 from a period at Ferrari, he and Maserati won the Formula 1 World Championship with the 250F.

1957 also marked the conclusion of Maserati’s works Grand Prix efforts, with the company experiencing financial difficulties. Focus shifted within the business to building cars for customers, and with that a road going Grand Tourer.

The first of these Grand Tourers was the Maserati 3500 GT. Designed from the ground up by Giulio Alfieri, the man responsible for designing the 250F and later the Tipo 60/61 ‘Birdcage’, the 3500 GT was a luxurious 2+2 gentleman’s express. The bodywork was handled elegantly by Carrozzeria Touring, using their Superleggera construction technique which allowed for super light weight thanks to small diameter steel tubes forming a framework for the thin aluminium panels to sit over.

At its core, the 3500 GT utilised a 3,500cc development of the A6 engine as found in the 250F and 300S sports car. The aluminium straight six engine was modified to be wet sump for practicality while ignition was of twin spark plugs by Magneti Marelli, breathing through triple Weber carburettors.

Suspension was double wishbone with coil springs and hydraulic dampers with anti-roll bar at the front, and the rear was handled by a Salisbury solid rear axle, semi-elliptical leaf springs, hydraulic dampers with anti-roll bar and a torque arm. The 3500 GTs initially featured Girling drum brakes at front and rear, with disc brake later introduced on the front and then on both front and rear. Wheels began as the steel disc type, before Borrani knock-off wire wheels were introduced as an option.

Introduced at the 1957 Salon International de l’Auto in Geneva, Maserati showed one Touring coupé and one other coupé by Carrozzeria Allemano. It was the Touring version which proved popular, and over the seven years of production, 2,226 examples of the 3500 GT were built. It was a great success for Maserati’s first foray in to production Grand Touring cars.

AM101.1132 was ordered by Swiss Maserati importer Martinelli e Sonvico in October 1960. The 3500 GT was specified in black with red leather interior, right hand drive, five speed gearbox, disc brakes all around, and Borrani wire wheels. Built by Maserati in December 1960, it is one of only 43 right hand drive 3500 GTs ever built, and was delivered to Martinelli e Sonvico in Chiasso, Switzerland.

In early January 1961, 1132 was registered to first owners Fa Kuderli & Co of Zurich. From Kuderli & Co, 1132 was then sold to Dr Walter Meier of Walo Bertschinger AG in Zurich, who retained 1132 until ownership moved to Ruth Meier of Erlenback, Germany in the late 1980s. In 1998, Ms. Meier sold 1132 through Oldtimer, a classic car dealer in Aarlter, Belgium, to Karl Heinz Kostal of Pirmasens, Germany.

Kostal later sold 1132 to The Gallery Brummen in the Netherlands, who in turn sold it to the first English owner, Christopher Derricott in 2008. Mr Derricott brought 1132 over to the UK, and road registered it with the number 861 XUF in June 2008. Having had the car inspected by Maserati specialists Bill McGrath Ltd before purchase, Mr. Derricott instructed the company to restore the mechanical components of 1132.

The work included refurbishment of the cylinder head on the engine, brakes, suspension, steering and Borrani wheels. At this time the interior was also re-trimmed and the windscreen was replaced.

In 2013, 1132 received a full service and new stainless steel exhaust system from Classic Performance Engineering, and in 2015, Mr. Derricott had the bodywork restored by Prestige Restoration in Surrey. The work to the bodywork involved minor repairs with a full bare metal respray in the original colour of black and the brightwork being rechromed. The extensive work undertaken on 1132 for Mr. Derricott totalled over £120,000.

McGrath Maserati were instructed to carry out a service inspection, full service works, tuning and road test in January 2020, with the cost coming to just under £10,000. Accompanying 1132 is a history file containing Maserati Classiche issued Certificate of Origin and build sheet documents, copies of former registration documents, Swiss receipts dating back to 1983, and invoices for recent works completed in England.

A very rare example of the 3500 GT as one of just 43 right hand drive cars built. Beautiful to behold, and well sorted while remaining largely original, the 3500 GT awaits the open road with a new owner.