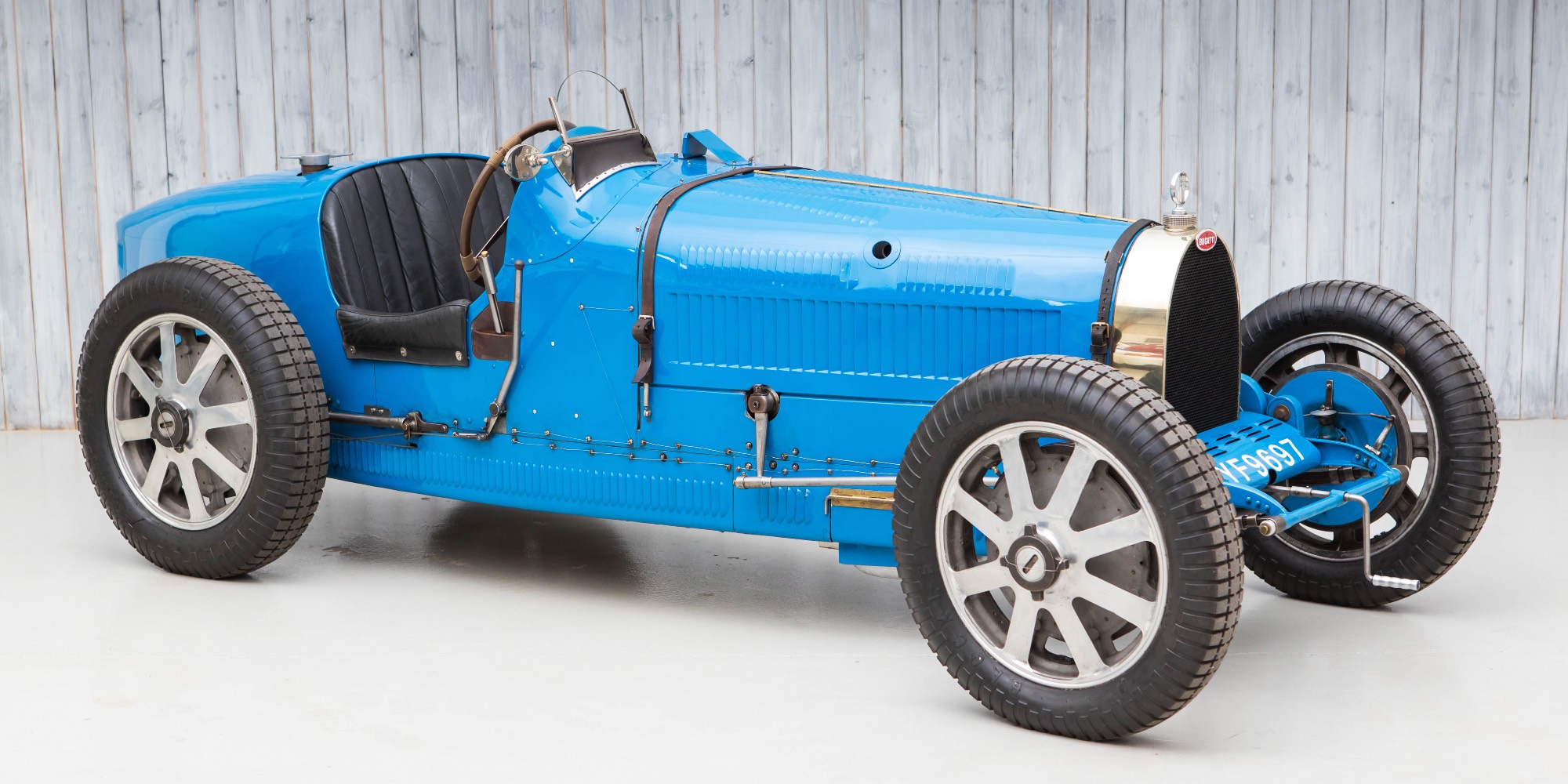 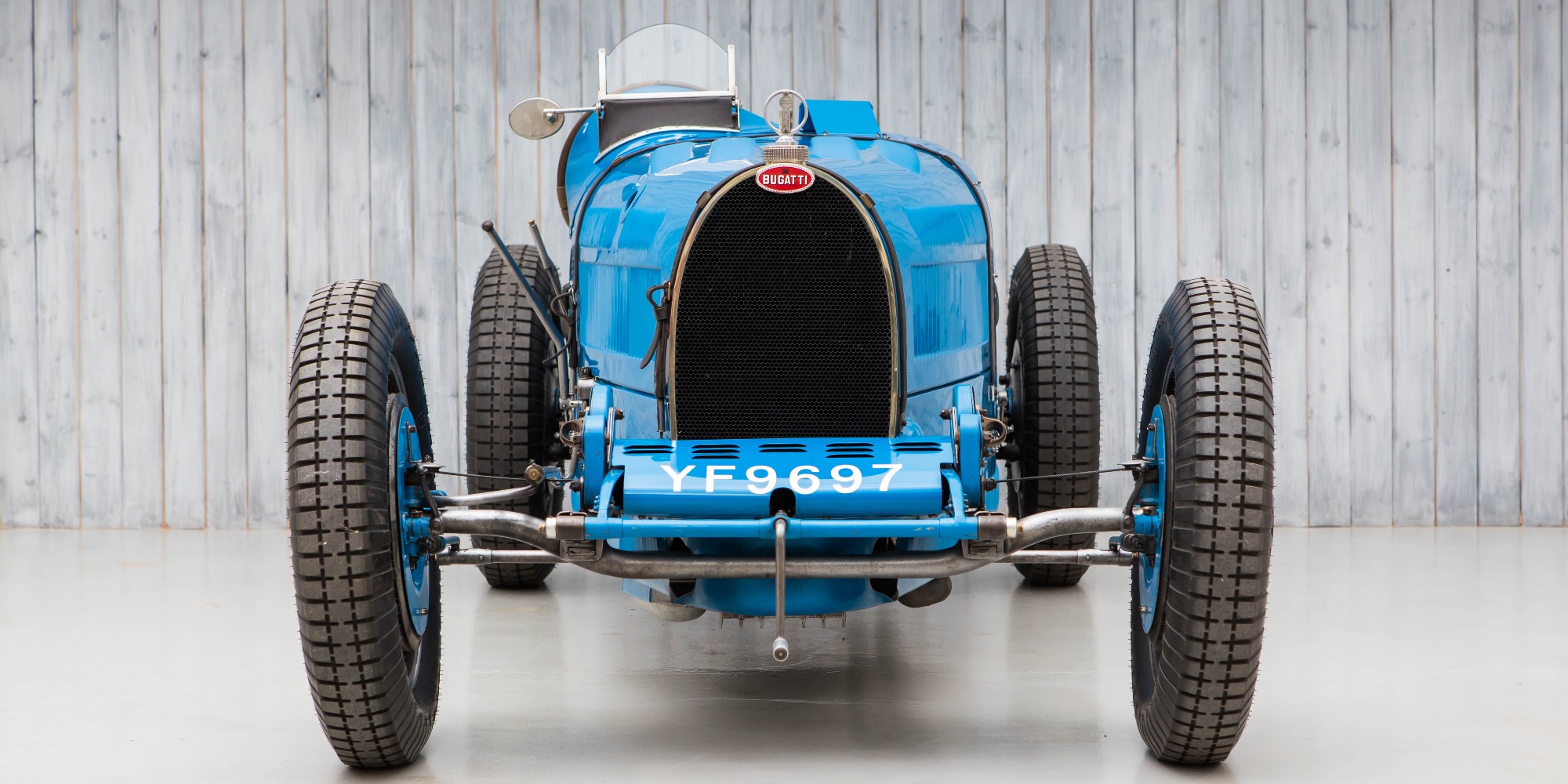 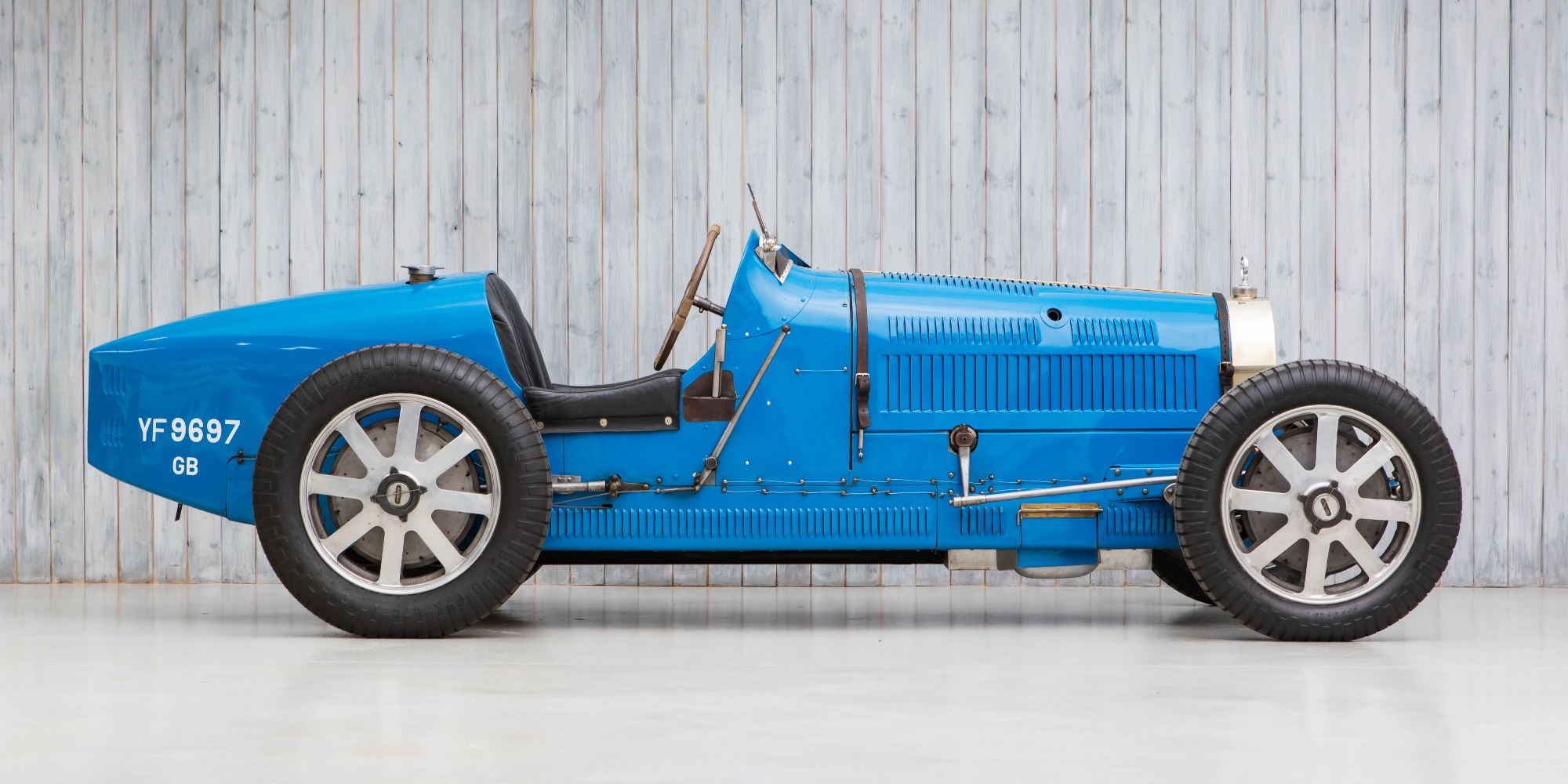 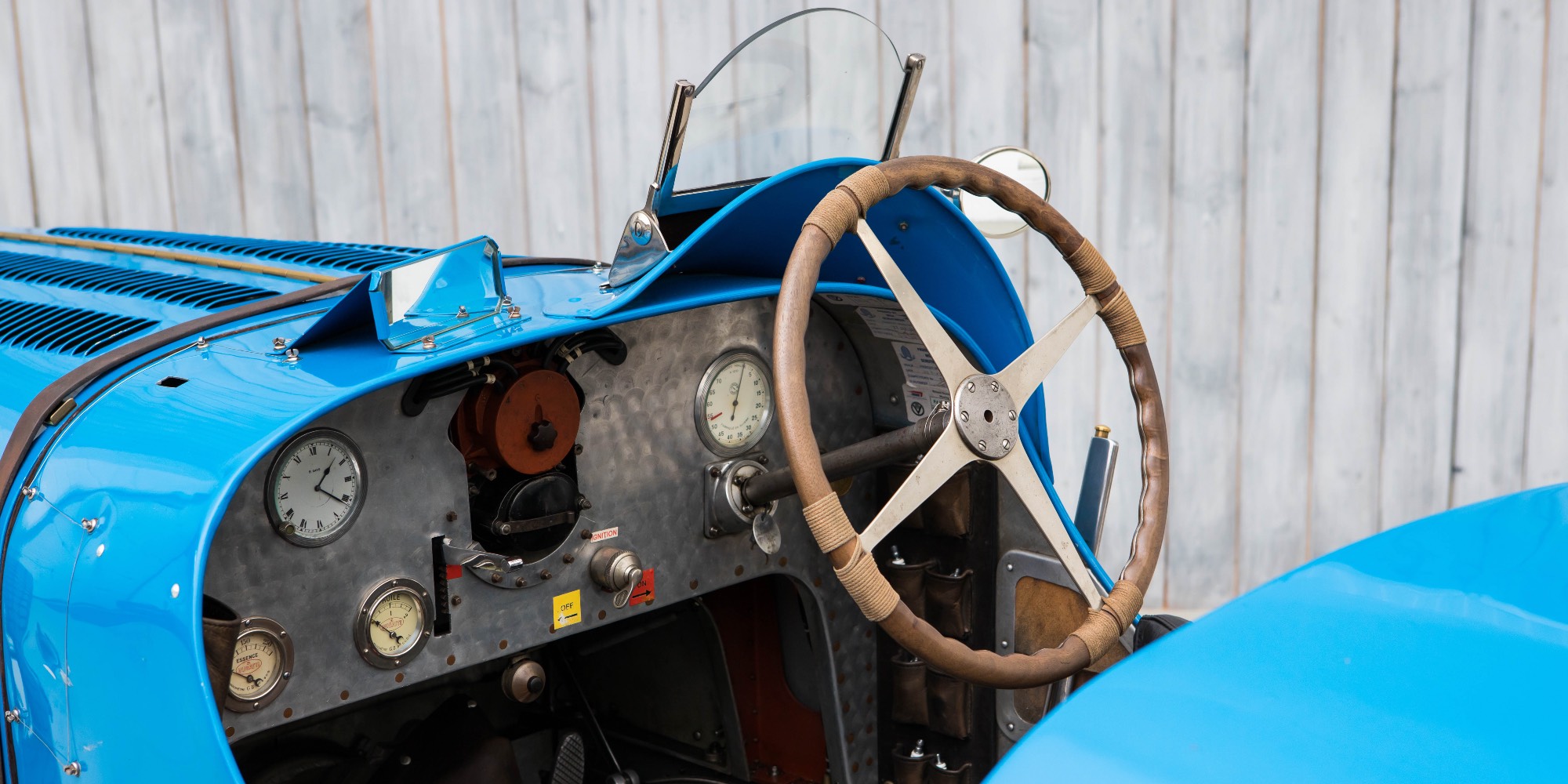 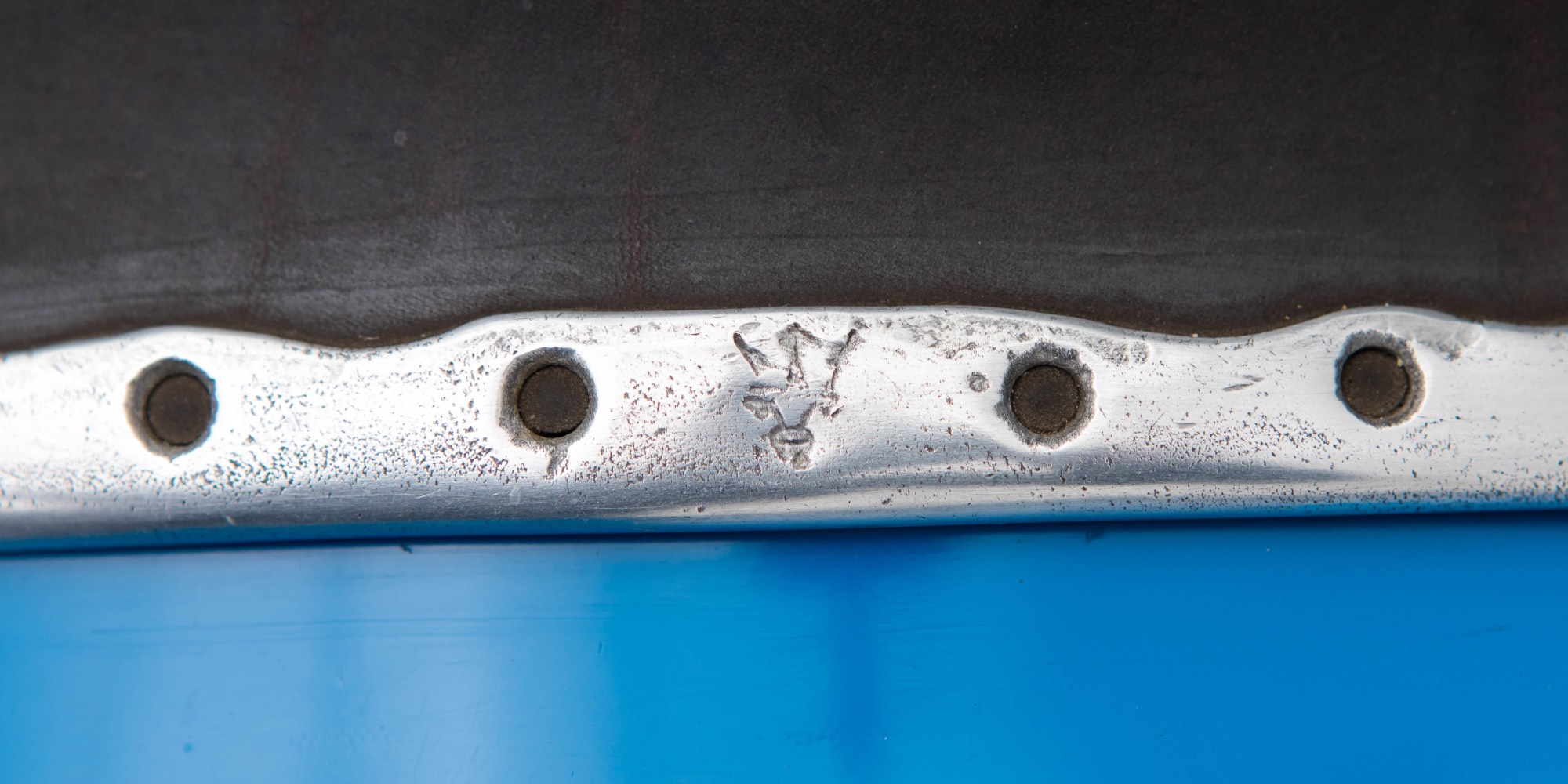 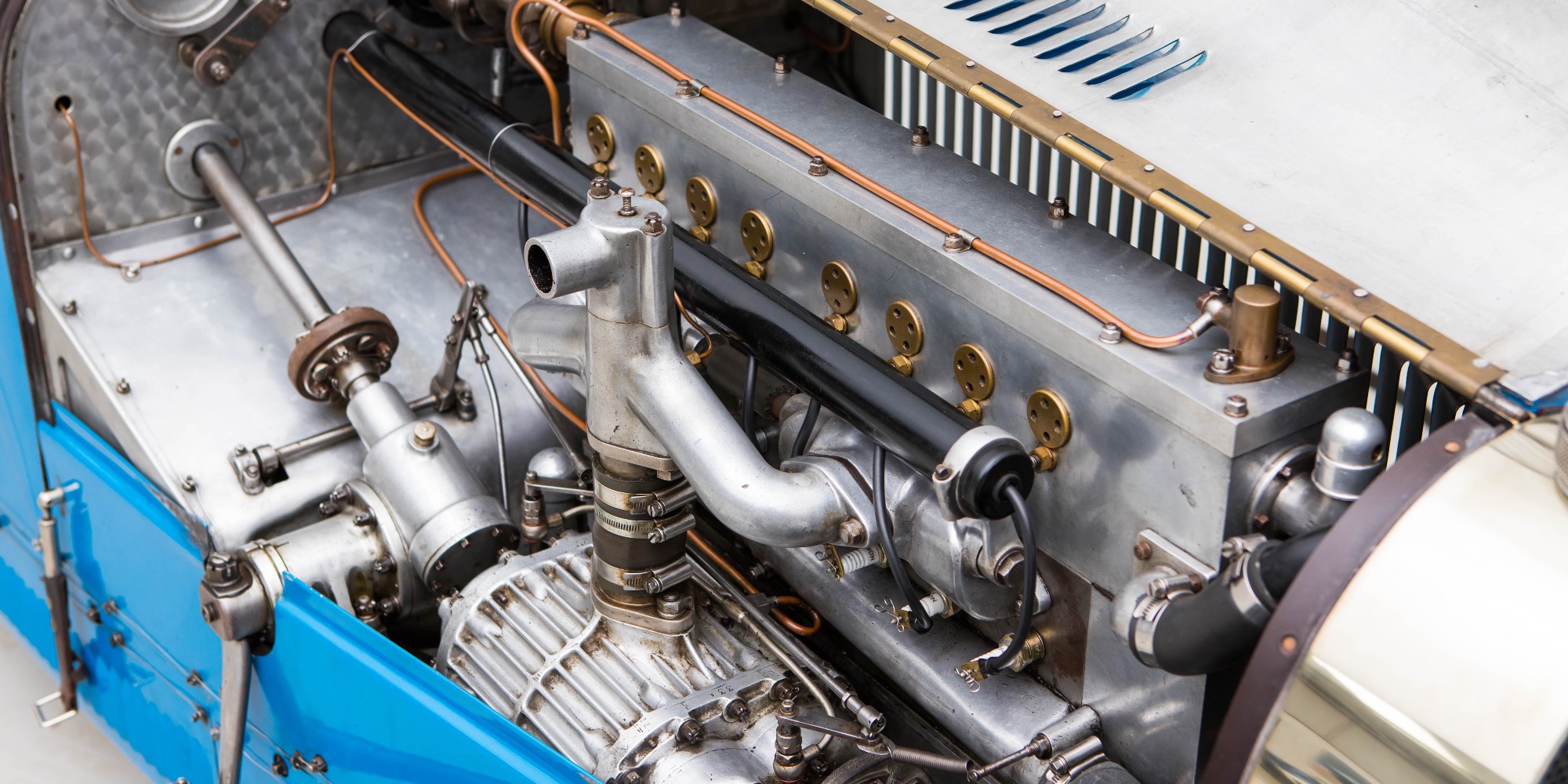 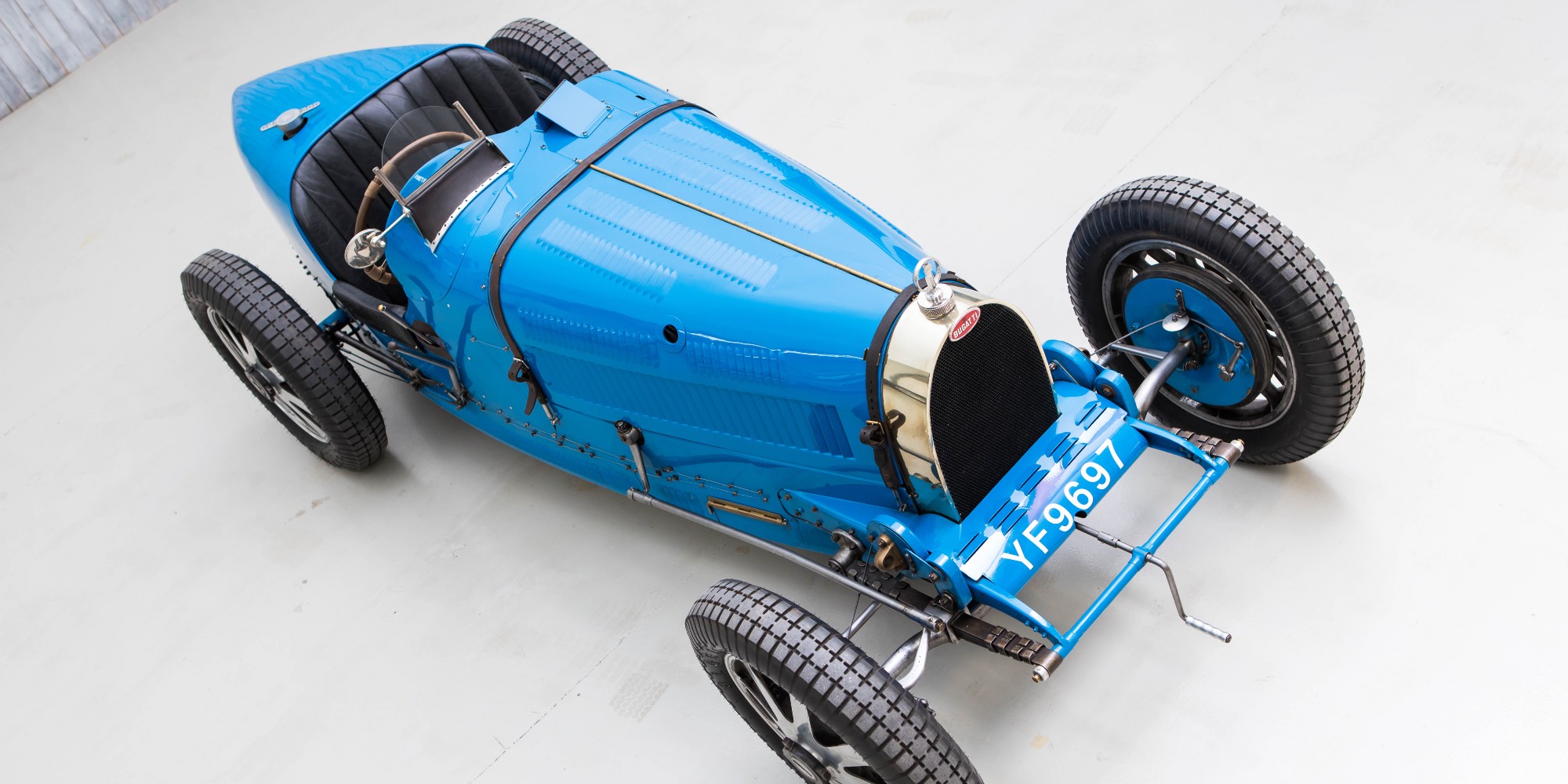 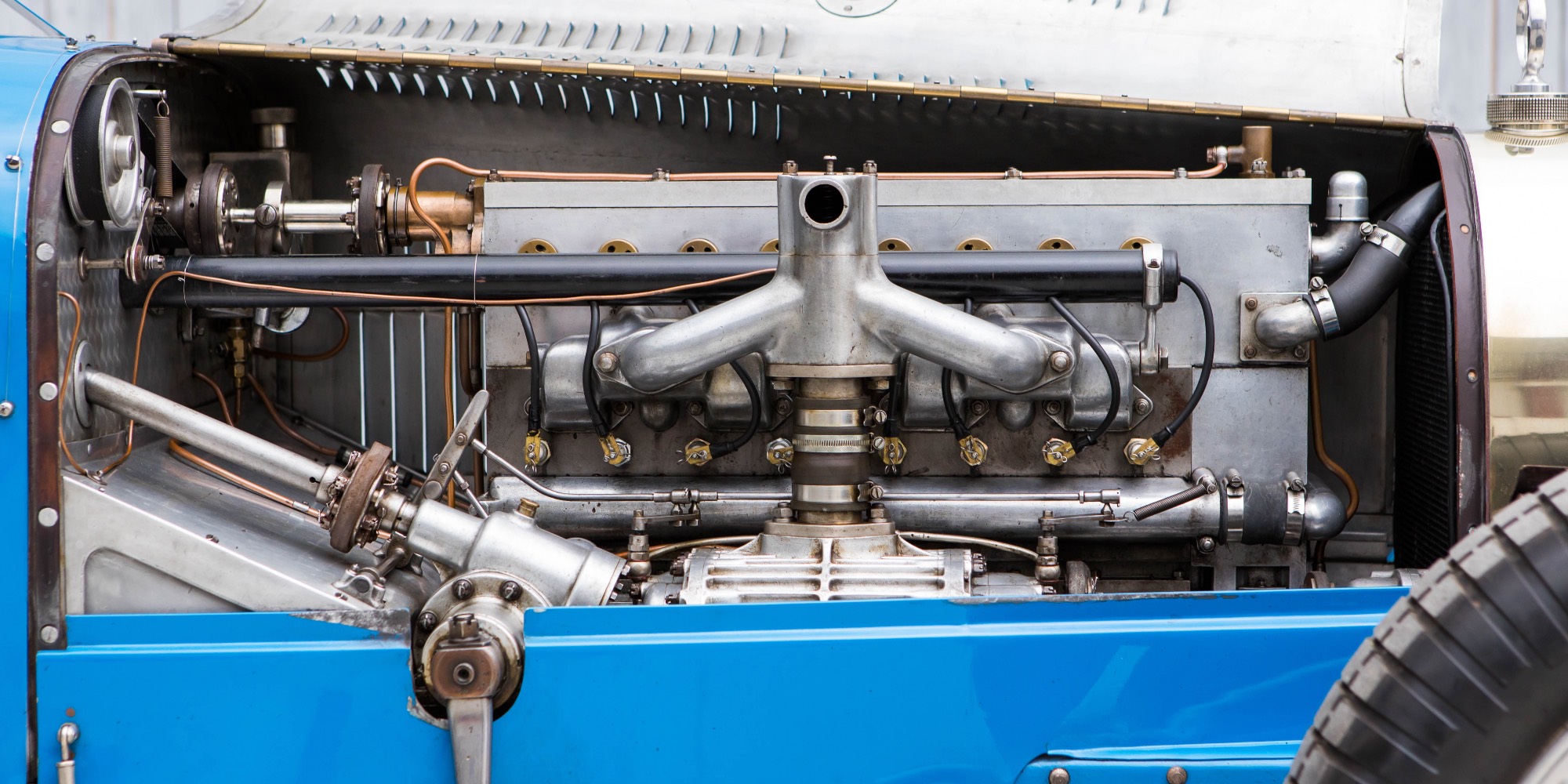 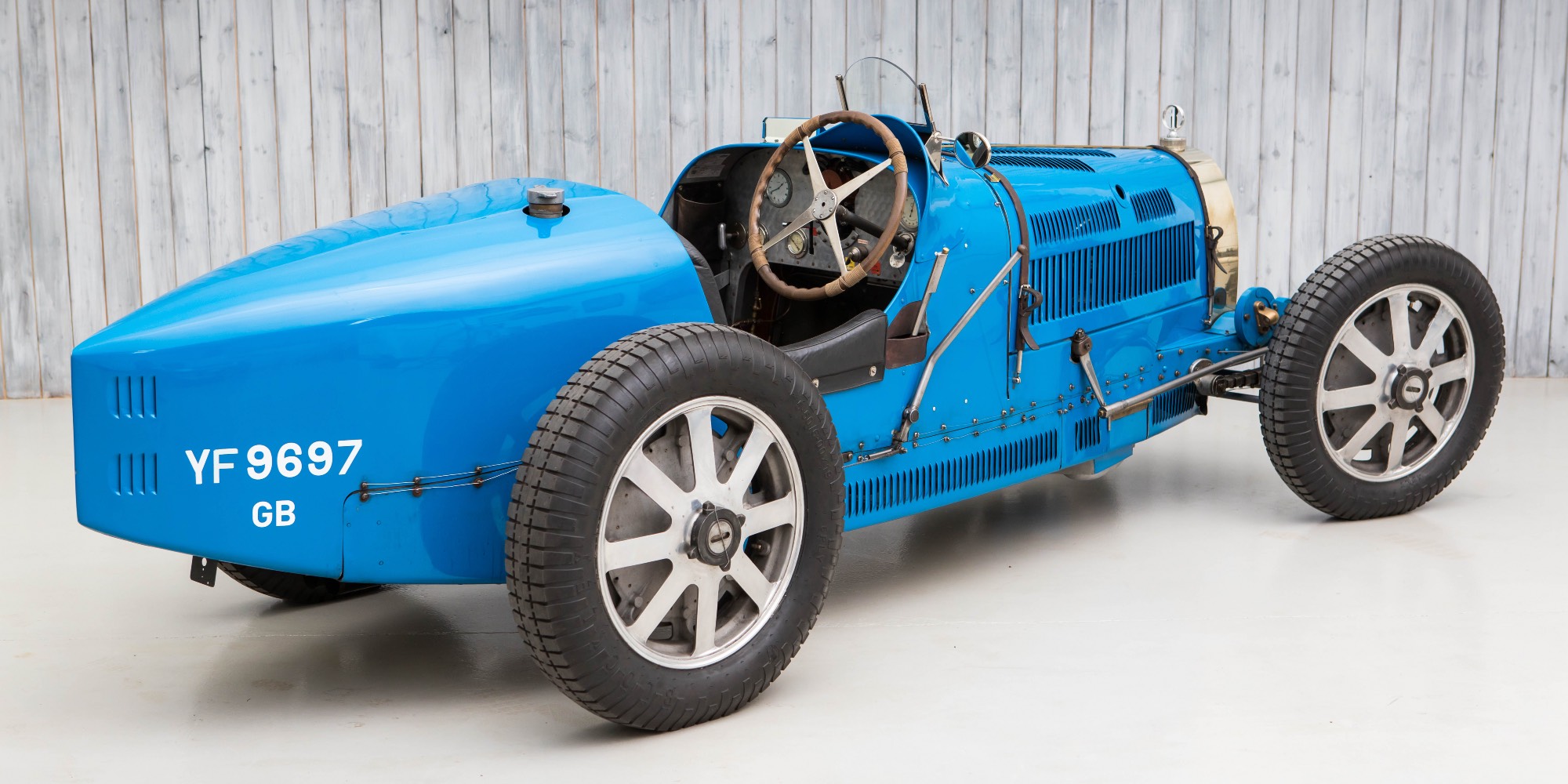 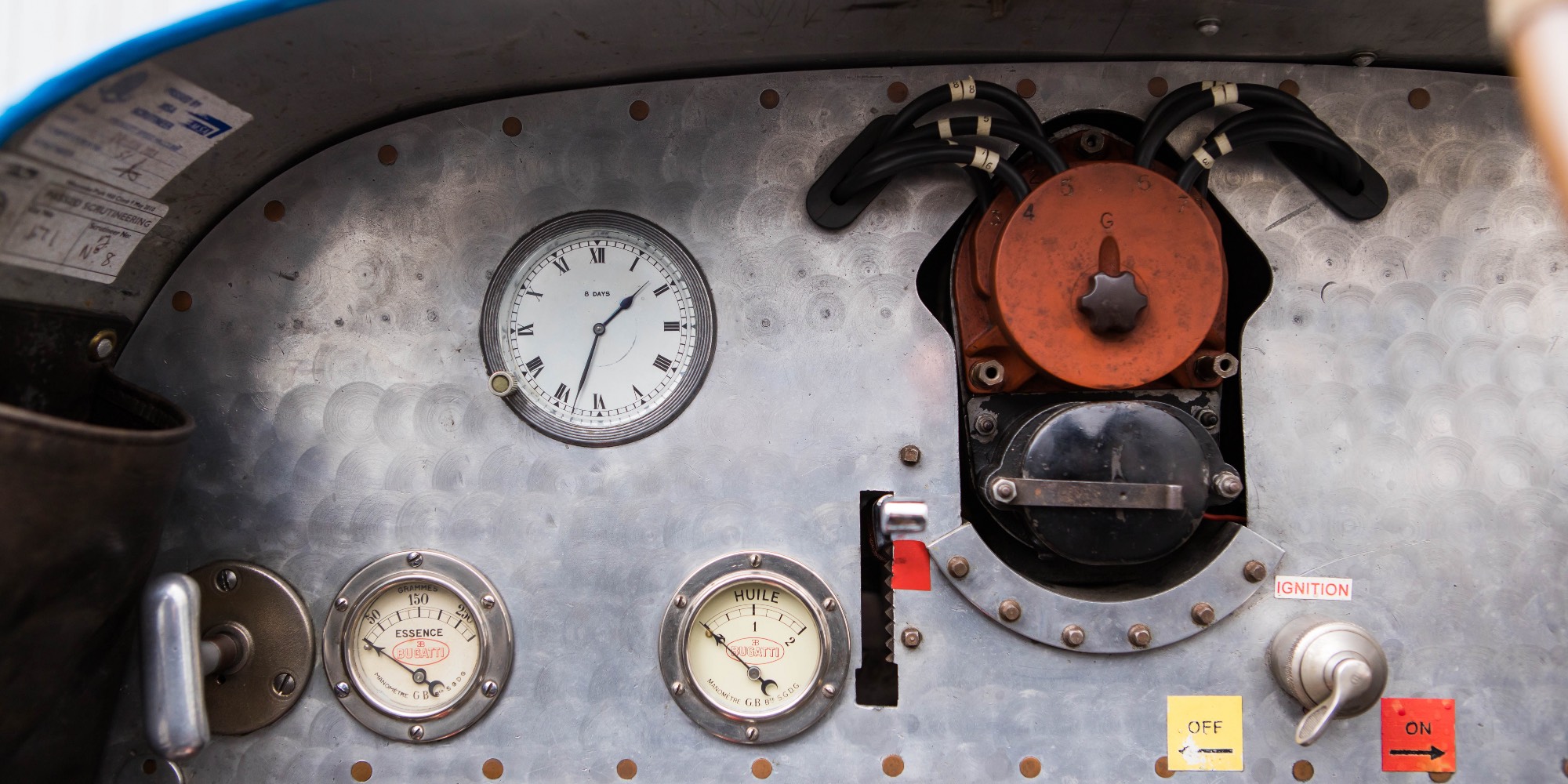 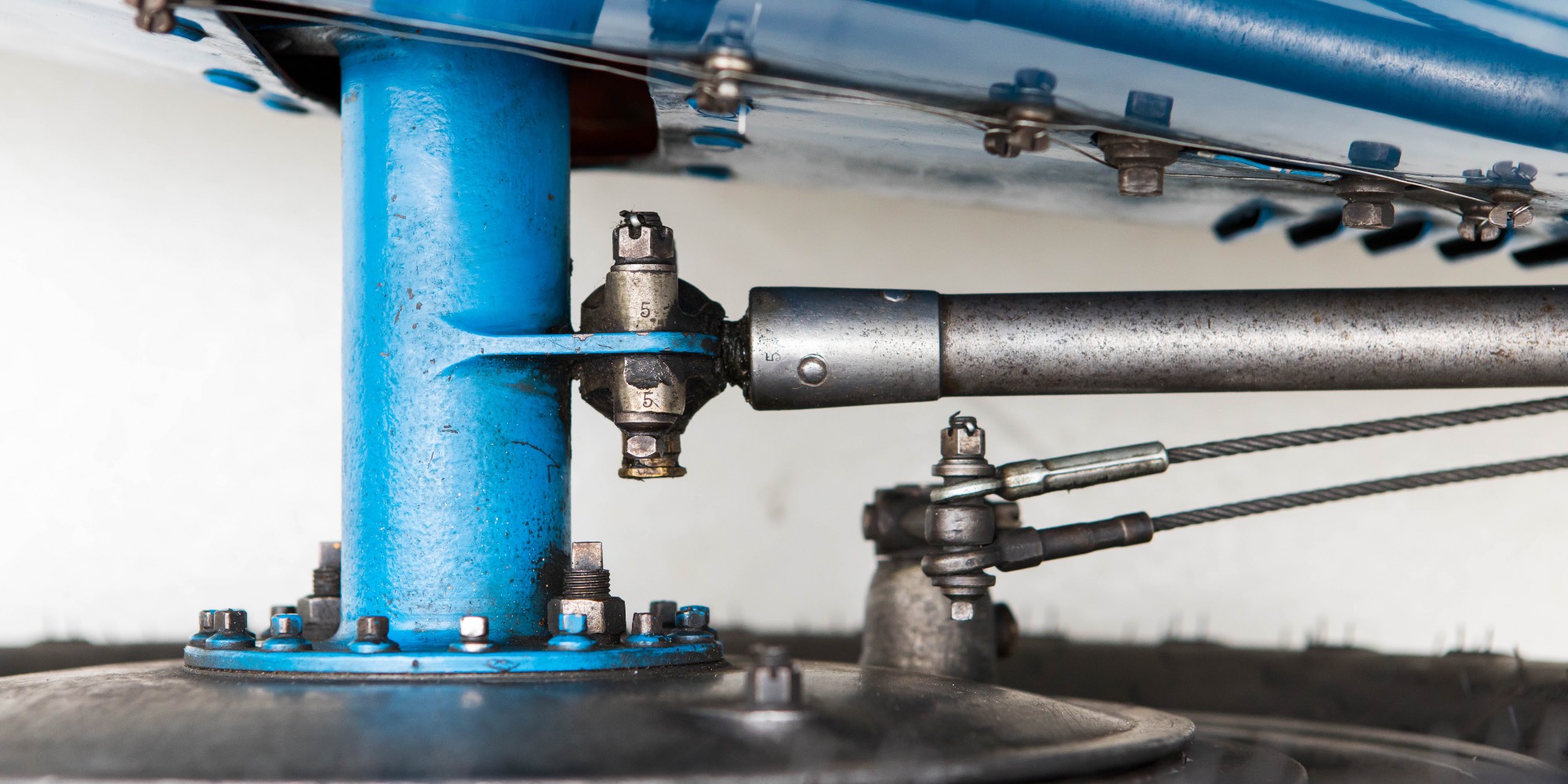 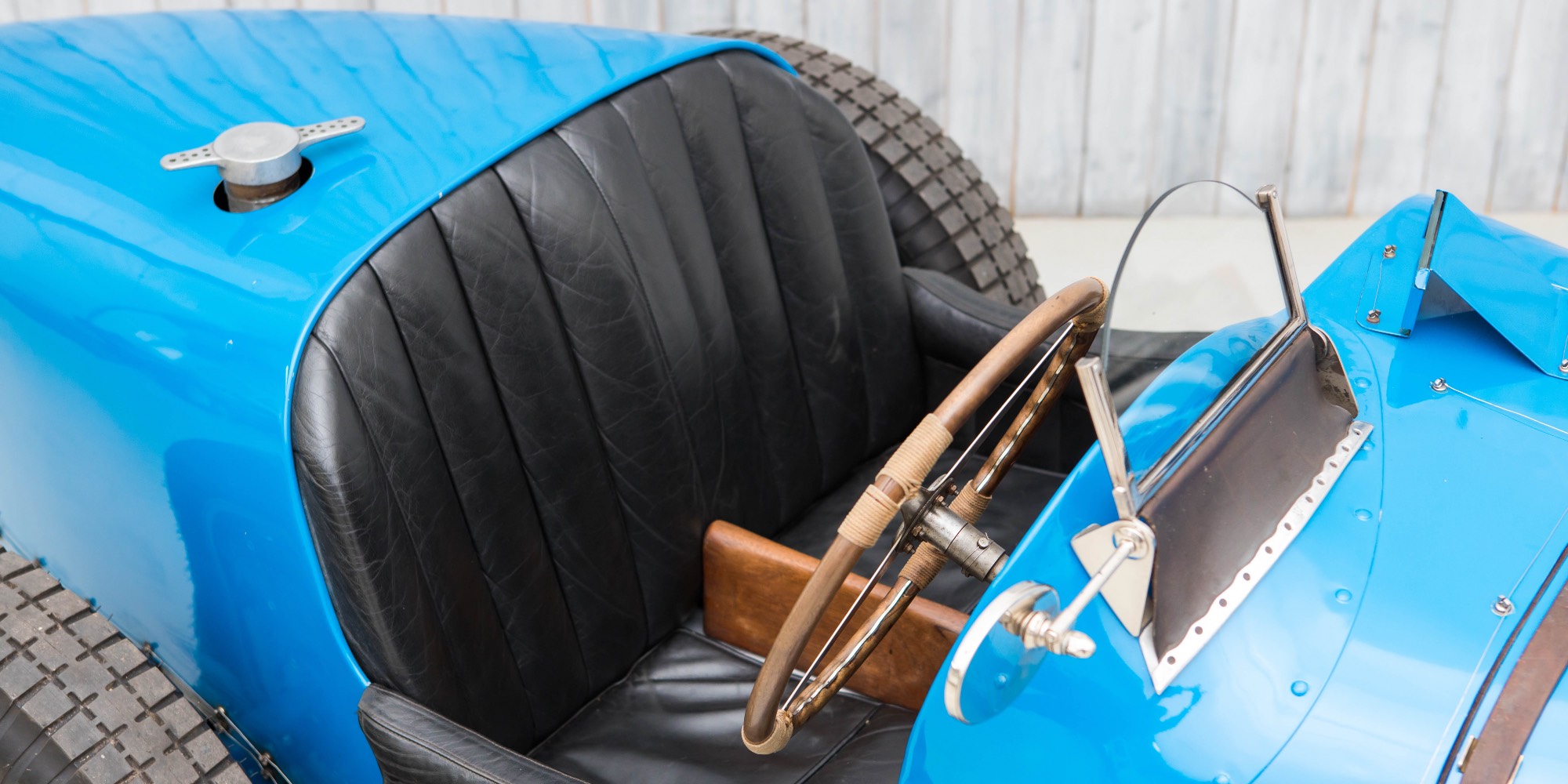 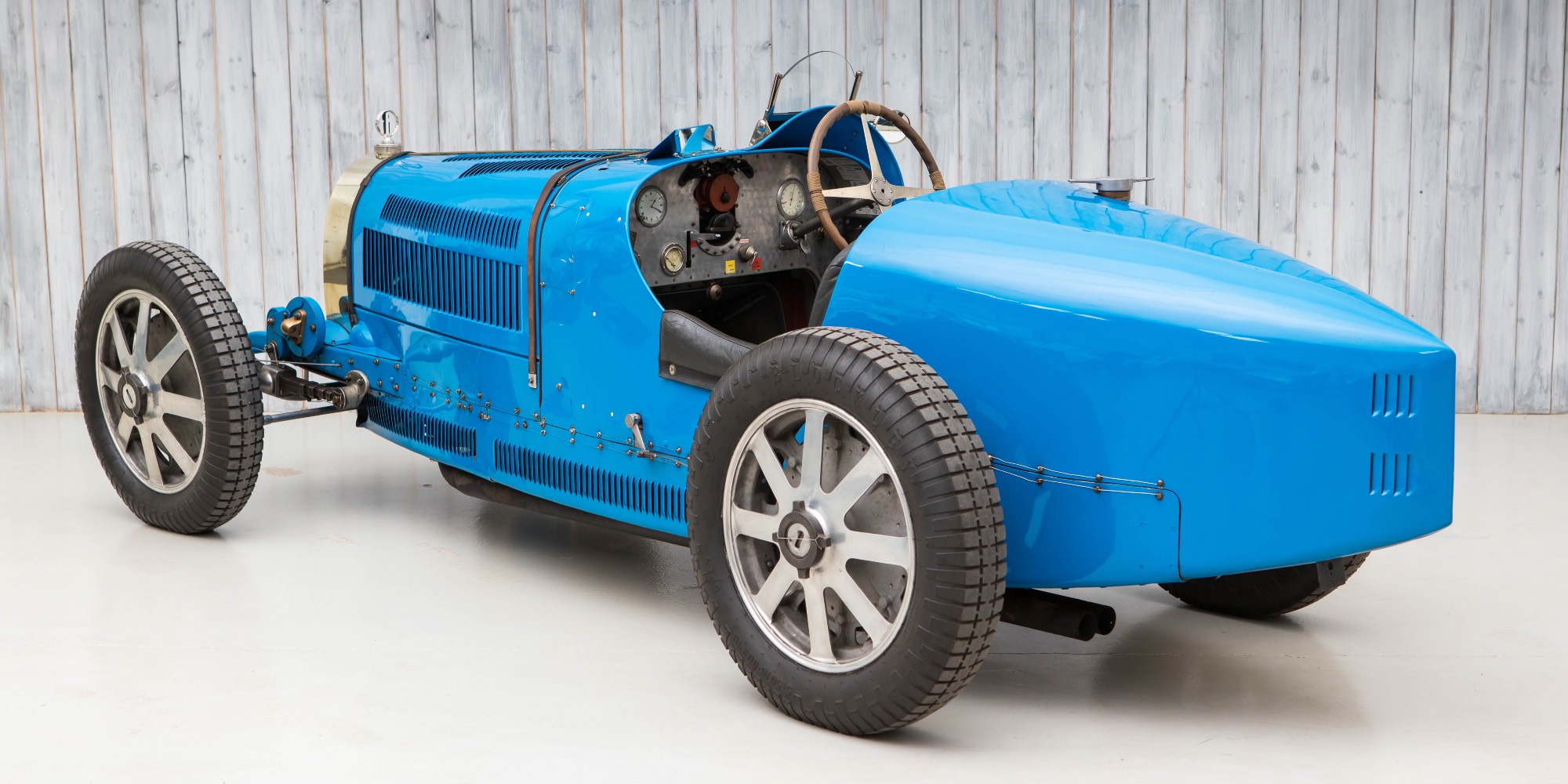 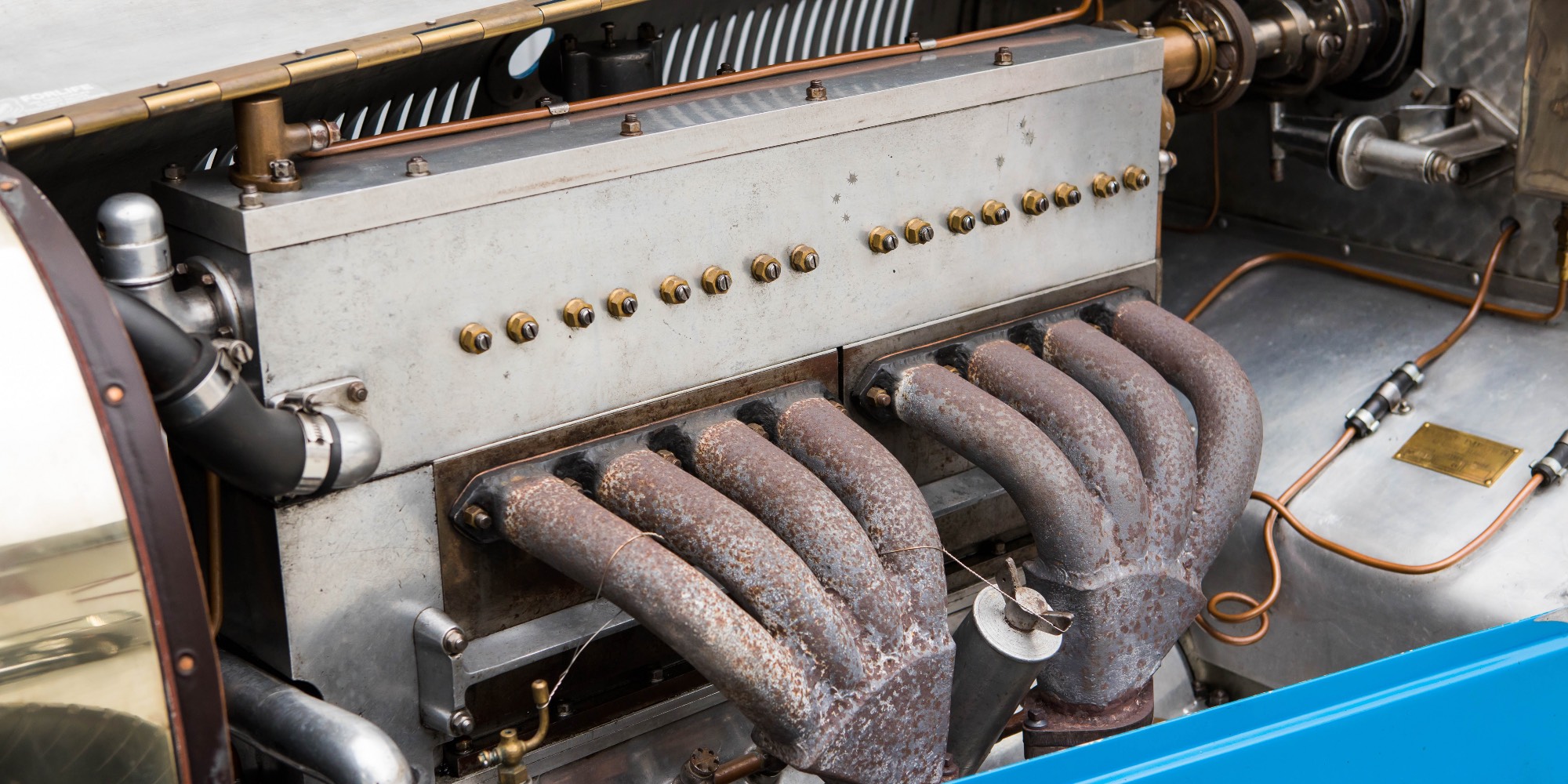 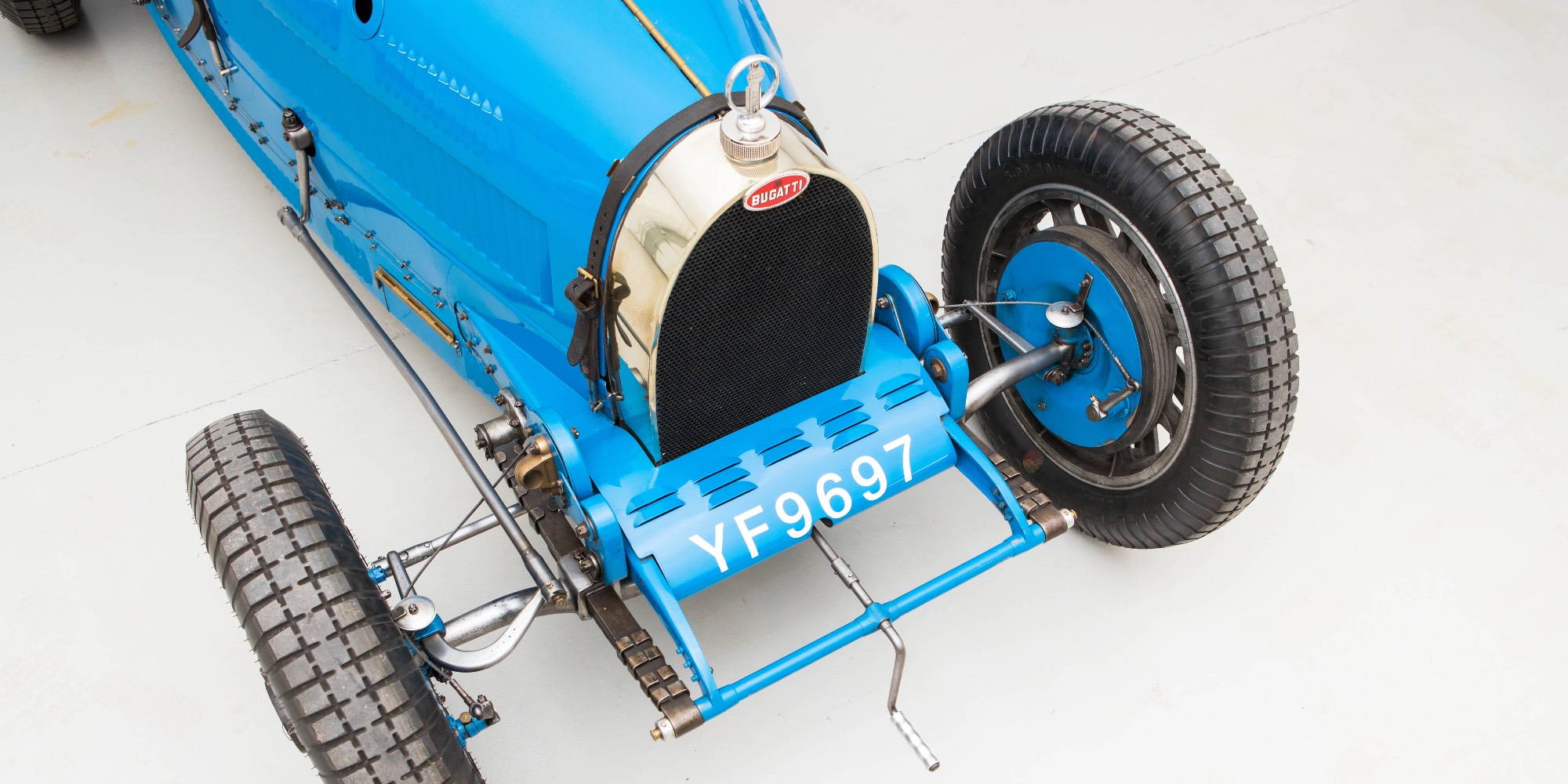 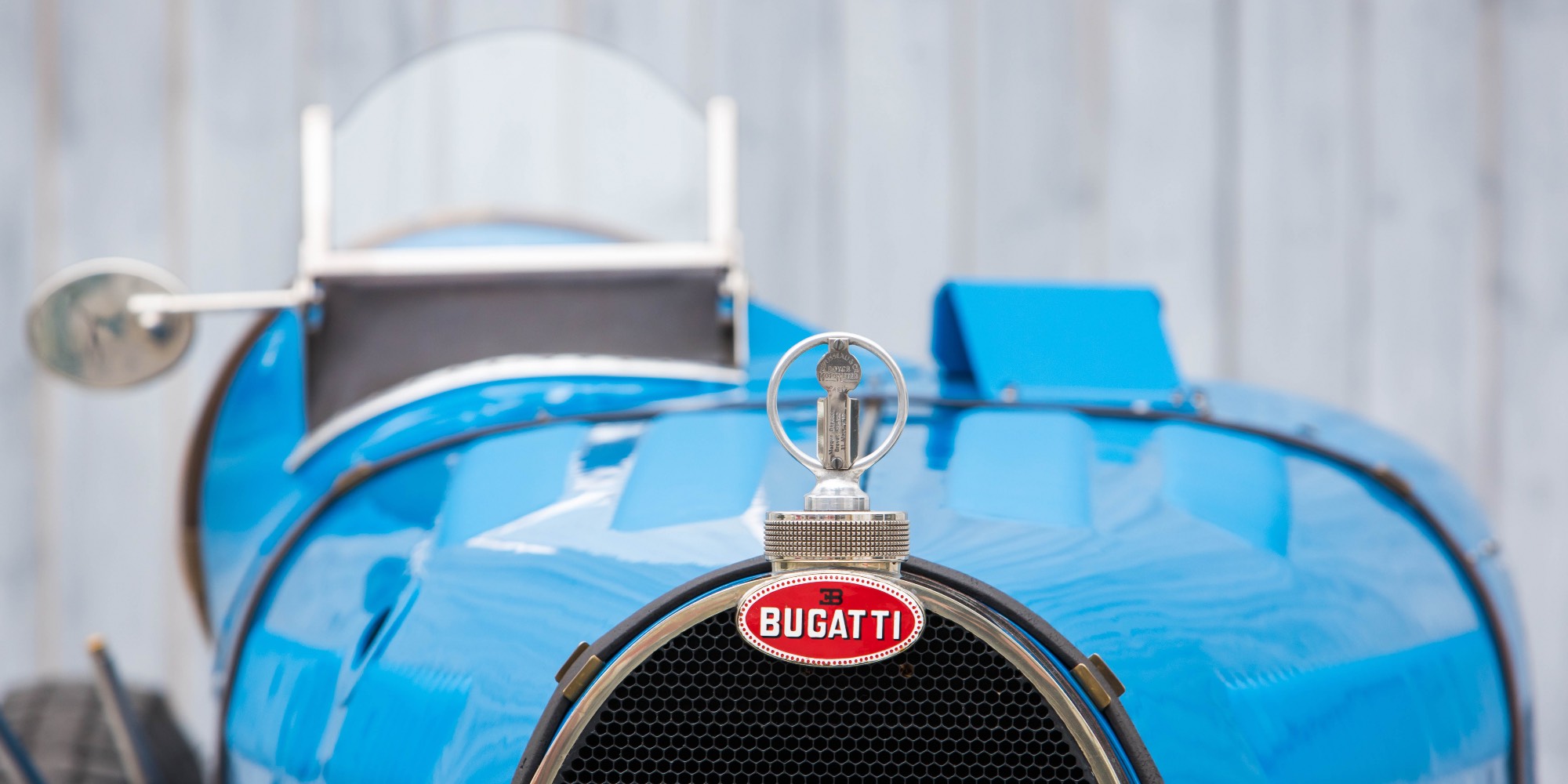 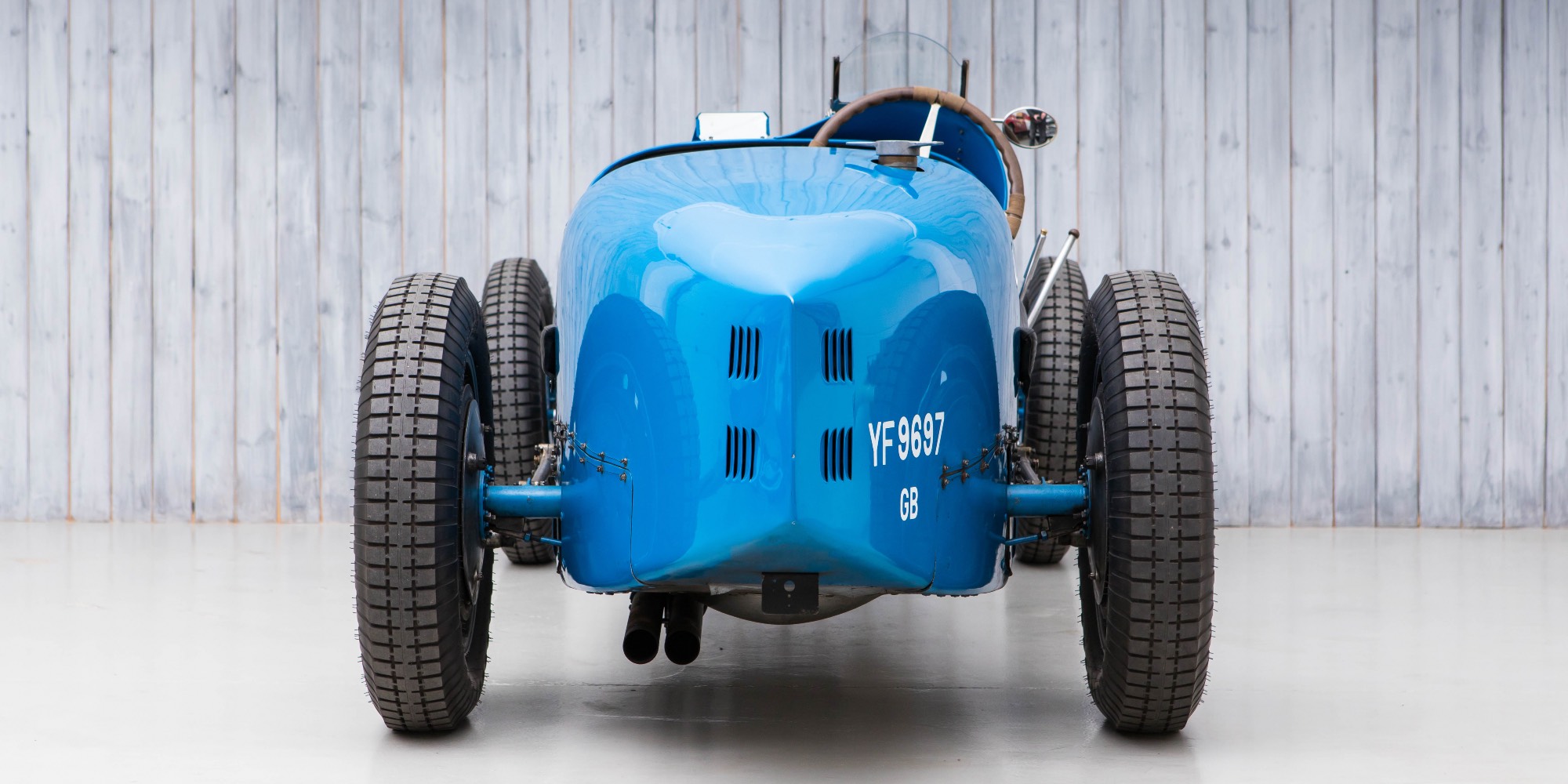 Nothing combines art, engineering and racing pedigree to the same extent as the legendary Bugatti Type 35B. The straight 8 2.3-litre supercharged engine resembles a piece of art as much as a racing engine. With that distinctive sound that you only get from an eight-cylinder Bugatti, their raw speed and legendary road holding, it is not difficult to see why they captivate people’s passion and hold their position at the pinnacle of motor racing history.

The Type 35 made its debut at the 1924 French Grand Prix at Lyon and embodied all of Ettore Bugatti’s experience, talent and sense of aesthetic beauty. With its sleek streamlined body and trademark horseshoe radiator, it is one of the iconic designs of the 20th century. The Type 35’s beauty was matched by its performance.

The Bugatti Type 35 in different guises became a dominant force winning countless Grand Prix and sports car races in the late 20s and early 30s in the hands of Works drivers and amateurs alike. Convincingly winning the Targa Florio in 1925, 1926, 1927, 1928 and 1929; the French Grand Prix every year from 1926 to 1930 and what has to be one of the most significant victories in motor racing history when William Grover-Williams won the inaugural Monaco Grand Prix in 1929. So successful was the Type 35 that out of 23 cars on the grid for the 1930 Monaco Grand Prix 14 of them were Bugattis. Type 35Bs are still raced hard to this day at some of the most prestigious circuits around the world including competing for the same cup that Williams won all those years ago.

The early history of this car is beautifully laid out in an article by internationally respected Bugatti Historian David Sewell in the Autumn 1996 Bugantics, named ‘An Irish Tale’.

The first known private owner of 4818 was Herbert Alen-Buckly of Dublin. Purchasing the then three year old Type 35A from London he imported it to Ireland in May 1930. Whether he ever used the car in minor Irish speed events it is not noted but he kept the car for a year before selling it to John Dolan of Whitehall near Kilkenny. He kept the car for a further four years before it passed to Neville Todd of Skerries on the coast north of Dublin.

To this point there does not seem to be any definitive records of 4818 being used in competition. It was not until it was purchased by its next owner Redmond Gallagher that things changed. Based in Tallaght on the south-west outskirts of Dublin and in his mid-twenties, Redmond was obsessed by motor racing. He purchased his first car, a 2-litre H.E. in 1932 before moving on to a 3-litre twin-cam Sunbeam, reputedly left by Malcolm Campbell after competing in an early Irish Grand Prix. From there he moved to a blown Austin Ulster which he rolled at Phoenix Park, breaking his neck in the process.

Not put off by that he had been following the success of a number of Ford V8-Engined specials and decided to build one for himself. All he needed was a suitable car to base it on. This is where 4818 came in. By now the Type 35A engine was apparently broken. Not an uncommon  occurrence with these 35A engines, the 3 plane bearing cranks could not take the revs like the more expensive roller bearing cranks used on the full GP examples.

A racing friend Dermot O’Clery apparently volunteered to help with the project but obviously got sidetracked by Redmond’s sister whom he promptly married. Gallagher’s family business was the Urney Chocolate Company. Redmond managed to commandeer the company’s chief engineer Mick Flynn to help with the work. A Ford V8 engine and gearbox were fitted into the car and it was clothed in a monoposto body that resembled the popular ERA.

When finished it was christened the Urney Special Racer or U.S.R. From the outset it proved fast although a little prone to understeer with its heavy engine. The U.S.R. (4818), made its racing debut in the 3rd Leinster Trophy in July 1936. Held over 150 miles, it was based literally on his doorstep in Tallaght. As recounted in Brendan Lynch’s history of pre-War racing in Ireland ‘Green Dust’, it was torrential rain for the whole race. 4818 was doing well, exceeding its handicap until well into the race, with fading brakes it clipped the parapet of Templeogue Bridge, ending its race. Gallagher continued to race 4818 notably at Limerick and Cork and broke the outright record at the 1936 Kilternan hill climb.

In 1937, about to get married, Gallagher sold 4818 to Bill McQuillan who competed regularly with the car over the next three seasons, with much success. In 1938 he set a new record at Kilternan and finished 3rd in the Limerick Grand Prix. He eventually overcame the braking problems by fitting a set of huge hydraulic brakes from a Talbot. His last pre-War race was the 100 mile Pheonix Park race which was held in September 1939, just six days after war had been declared. Having set the fastest time in practice at 82 mph he sadly failed to finish the race.

He continued to race 4818 into the early postwar years before selling it to Irwin Catherwood who continued to use the car with great success. In 1951 he won the Sexton Trophy, awarded annually to the season’s most successful Irish racing driver. Not bad in a car now 25 years old.

From Catherwood ownership of 4818 passed to a man named Stuart from County Louth or maybe County Cavan? According to David Sewell he only raced 4818 once at Kirkistown in 1957, eventually selling it as a non-runner to “Hammy” Harkness of Crumlin in about 1968. Harkness apparently intended to restore it back to its original form removing the Ford engine and gearbox early on in his ownership and ordering a replica GP body from well known Bugatti body builders at the time Peel. Nothing further was achieved and 4818 was stored along with several other cars in his ownership, including a 6C1500 Alfa Romeo, a C-Type MG, Rolls Royce Silver Ghost and several other incomplete cars. This collection then sat there undisturbed and only known of by a small handful of enthusiasts for the next 25 years.

In 1996, Harkness’s health deteriorated and a decision was mede by the family to sell the collection. At this time David Sewell was approached by a prospective buyer who had inspected the car, had the frame and back axle numbers and wondered if David could shed any more light on what its original chassis number would have been as it was not known to the current owners at the time. David quite rightly stated that it was rarely possible to determine a cars chassis number just from the number in the rear of the frame. It is however often possible to narrow it down to a batch of about five examples through data on other frames accumulated over time. Knowing it had been a Type 35A the chassis number was narrowed down to a list of five including 4818.

More time passed as did a number of offers that were refused and the crucial information eventually came from Irish motor racing historian Simon Thomas. He had been fascinated with the car over the years and had corresponded with Redmond Gallagher in 1986. Gallagher had found the original log book for the car. He sent Simon a copy and it showed that the car had been registered YF 9697, in London, in May 1927. Described as blue two-seat sports Bugatti with chassis number 4818 and engine no. 4818/110A. This Irish log book had been issued in 1930 and listed the aforementioned owners from 1930 to 1935. 4818 was one of three Type 35A Bugattis invoiced by the factory to Brixton Road on the 13th of September 1926.

At the time of this discovery well known UK based Bugatti restorer Ivan Dutton, who had been keeping a close eye on proceedings, stepped in and matched the seller’s asking price. The deal was done and he and his wife Mary travelled  over to Ireland the   following weekend and brought the car back with them. He then set about the restoration, converting it as he did to the more desirable Type 35B specification. An engine has built using an original upper and lower crank case (lower crankcase part number 11), original crankshaft and rods, original cam box (numbered 92 – apparently sourced from the USA) and an original supercharger, supercharger internals (No. 33A from a Type 43), original blower drive. An original gearbox, number 462 was also sourced and fitted.

As previously discussed, 4818 had retained a lot of its significant parts original to the cars from new. The chassis frame, number 274, the front axle beam, the steering box and drop arm, the  entire back axle casing with torque arm (both of which were modified from single bolt to three bolt during the restoration), the rear springs and rear shock absorbers. An original repaired dashboard and bulkhead panel were sourced and fitted along with an original peddle shaft, steering wheel and starting handle.

It appears Ivan sold 4818 to Alf Smith in 1997 either during or just post the restoration. When complete 4818 went on to compete in the 1998 and 1999 Williams Trophy with Ivan at the wheel. Purchased by the current owners in 2001 They have continued to use 4818 as it was intended.

Campaigned extensively in the UK over the years where it has been a regular at Prescott and Shelsley Walsh they have also taken the car on a number of International rallies and events. In 2003 they took the car to America where they raced it at Laguna Seca coming second in the Bugatti Grand Prix, before heading to the east coast to race at Lime Rock and take part in the International Bugatti rally held in Massachusetts. Shortly after the trip to the USA the decision was made to fit a new upper and lower crank case to the engine putting the originals to one side for posterity.  This gives 4818 the best of both worlds. and the original are kept safe and the new parts allow you to push the car harder. All of the key work was done by Ivan Dutton Ltd. and the original upper and lower casings obviously remain with the car.

Only being sold to make way for a new and exciting project, it is clear 4818 has been cherished during its current ownership. 4818 has been regularly worked on by Ivan Dutton Ltd. during their 20 years of ownership and this very much shows in how the car is presented. If you have been searching for a Type 35 or 35B for some time you will know all too well how hard it is to find a car with a clear and well documented continuous history still retaining a high degree of originality. With a continuous history, pre and post-War competition history and still retaining its original chassis, front and rear axles, combined with an original engine, gearbox and more, 4818 offers a very attractive and exciting prospect indeed and an opportunity not easily repeated.